The Venezuelan Poodle Moth is a mysterious and fluffy insect that’s only been found once, and was not sampled.

This moth was discovered in 2009 in Venezuela and is said to resemble a poodle. That is, if poodles had huge wings and feathers instead of ears. 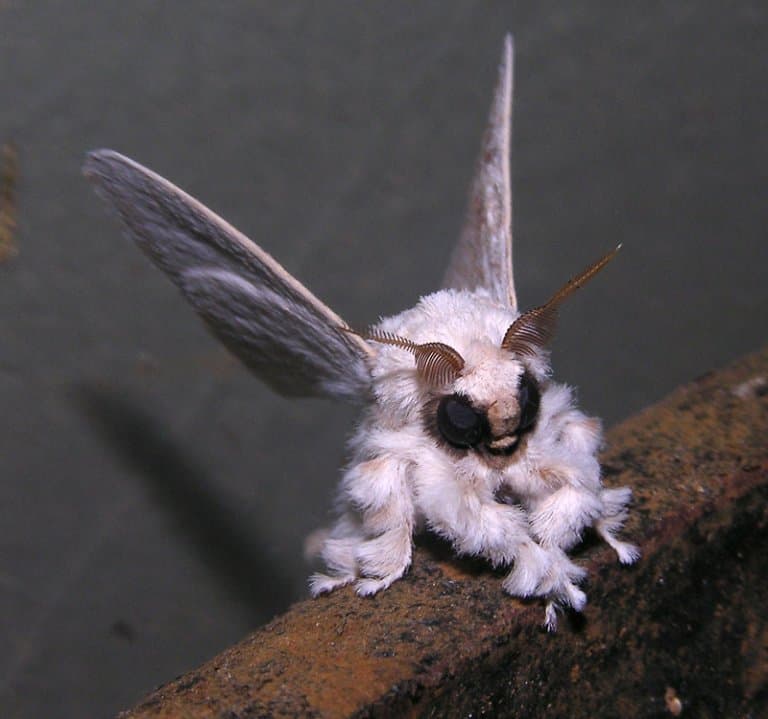 So far, its taxonomy hasn’t been established and there is no way to find out any more about it without further investigation.

There has only ever been one single photo of the unidentified Venezuelan poodle moth, which is shown above.

Any other photos you may have seen will be a different moth species, or simply fake.

For example, a thread on Reddit included a felt toy. 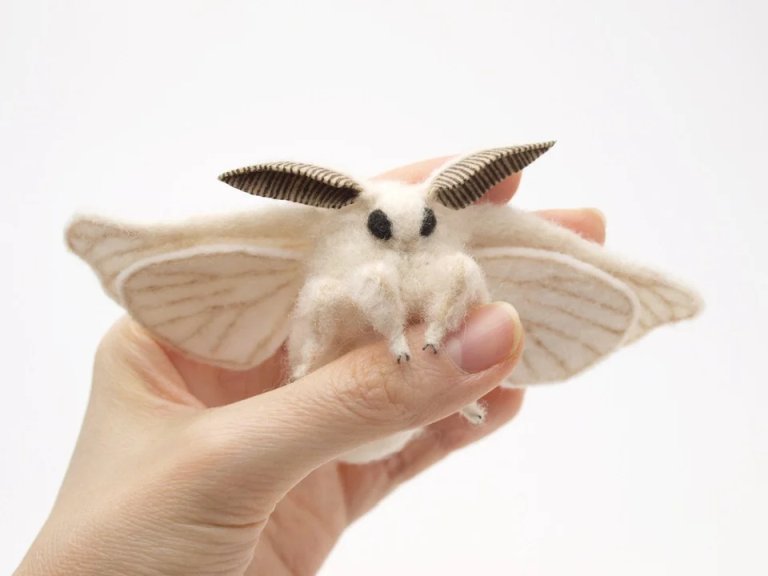 This is not a real moth!

So, let’s abandon any strong commitment to facts and wildly speculate about (and sometimes digress from) this unusual and enigmatic venezuelan poodle moth.

1. Its fur is made of soundproofing sugar

Ok, this isn’t exclusive to poodle moths, but it is interesting. That fluff you see on its body is made of chitin, which is basically the insect equivalent of cellulose; the material that makes up the cell walls in plants.

Chitin and cellulose are both strong, mesh-forming polysaccharides, or sugars, and they’re used for rigidity, scales, and, in this case, sound-dampening fluff for protection against bat calls.

The fluff absorbs the sound and muffles the return signal, making it harder for bats to ‘see’ it with their echolocation.

This poodle moth is definitely fuzzy, which means we can infer that it’s going to have bats as one of its predators, even if we don’t even know what it is yet. 1

The order Lepidoptera contains all the butterflies and moths. While butterflies are relatively easy to identify from photographs, – being out in the daytime and representing just over fifty species in the UK – moths are more evasive of classification.

Firstly, they are almost all nocturnal, as opposed to researchers, who are mostly diurnal, but secondly, there are well over 2,000 species of moth in the UK alone, and over 160,000 species worldwide., compared with around 18,000 species of butterfly. 2

3. How can we identify moth species, then?

It’s hard! Moths are very diverse, and they can have very subtle differences between species that aren’t always obvious without a microscope and several big pots of coffee. Taxonomy of invertebrates is generally a lot more time-consuming than with larger animals.

Identifying to the species level, any insect as diverse as a moth, from just a photograph, brings with it a lot of issues. For example, some species are differentiated only by the number or configuration of hairs on their legs.

For even more perspective, it’s thought that about 75% of all species of animal anywhere on earth are insects. That’s a lot of microscopy work. Insects are the most diverse group of organisms we know of.

But with modern technology, we are arriving at new ways to identify organisms by their genetic code. This is rapidly changing the arrangement of the biological family tree, as we discover hidden relationships between organisms.

4. Darwin once identified a moth species without ever seeing one

One of the most elegant demonstrations of evolution was recorded by legendary naturalist and grandfather of evolutionary biology, Charles Darwin. In 1862, Darwin was sent a peculiar flower from an orchid found in Madagascar, which had an unusually long nectar spur.

Understanding the relationship between plants and their pollinators, Darwin hypothesised that there must be a very specialised insect that feeds almost exclusively on this nectar source, and pollinates the plant in return.

He stated that scientists would eventually discover the plant’s co-evolutionary partner with a foot-long proboscis. And 20 years later, they did just that. The giant Malagasy hawk moth Xanthopan morganii praedicta.

Incidentally, and harking back to the difficulty in identifying species, it’s now being proposed that there are two species of these long-tongued moths. After studying the DNA of the subspecies praedicta (and its genitals), researchers have concluded that it may in fact be a separate species entirely. 3

5. Can we do that with the Venezuelan poodle moth?

What we have here is a moth with no obvious signs of specialisation. What Darwin had was a plant that clearly required a specialist to pollinate it. Unfortunately, in this case, it doesn’t work in reverse.

If the Venezuelan poodle moth’s proboscis – or anything else on it, for that matter – was a foot long, we could infer a corresponding organism that it has to match with. And this might give clues as to where to look for other members of its species.

But nothing particularly stands out from the photos available.

The poodle moth was photographed in 2009 by Kyrgyzstani zoologist Dr. Arthur Anker in the Gran Sabana region of Venezuela.

It was uploaded to Flickr with some other rather amazing moths and insects, including a ‘goat moth‘. 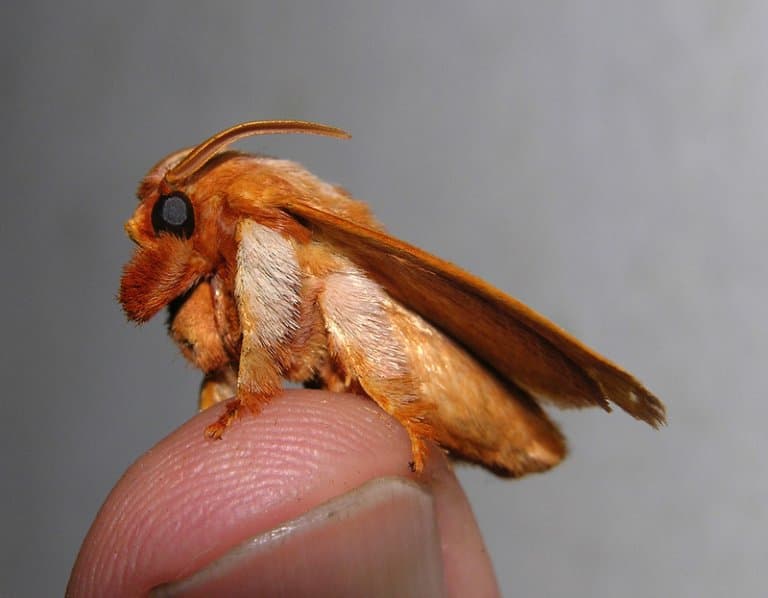 And a ‘bolognese caterpillar’.

Which, while bizarre – make the Venezuelan poodle moth feel a little less weird – and all appear to be genuine, from a reputable zoologist.

However, many supposed images of it appear to be of a silkworm moth Bombyx mori, which has a distinctly different wing arrangement, and antennae morphology and seems to comb its hair better than the example found in Venezuela. 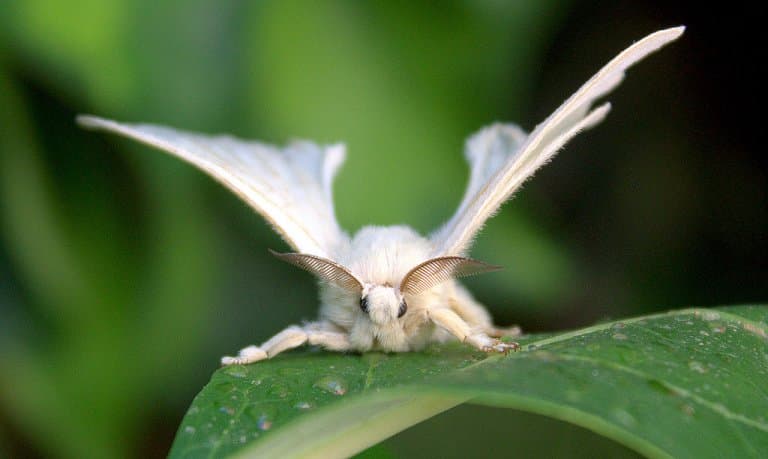 Other images are of muslin moths who have been speculated to be related. 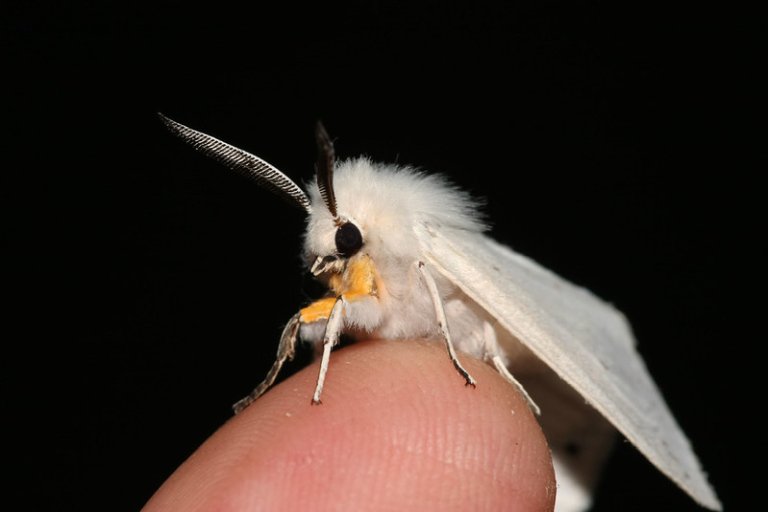 There are also photos of a felt toy model that are floating about similar to the Reddit thread above, that claim to be a poodle moth.

Yes, unfortunately, no specimen was brought back, so there’s not much else we can know about it. We can guess at a couple of things, though.

9. It could be in the family Lasiocampidae

Some level of taxonomy is easy enough to guess at. We can be pretty certain it’s an insect. It looks a lot like a moth. The next level down is about as far as we can reliably guess, and people who may know have guessed at Lasiocampidae.

Dr. John E. Rawlins from the Carnegie Museum of Natural History in Pittsburgh speculated the following:

Here’s my vote/guess to ID the poodle moth. The antenna is distinctive.

Lasiocampidae: Artace or a related genus, probably not Artace cribraria (presumably North America to Argentina, but nobody has revised this group from Mexico south). There are more than a dozen described South American species of Artace, but their delimitation, validity, and even their generic placement is uncertain. It will take two things to solve this problem: a comprehensive revision of Artace and kin, plus an actual specimen of a genuine “Venezuelan poodle moth.”

If you were to find an albino rabbit, or one of those snakes with two heads, you might be excused for assuming it was a new species. Mutations occur in every generation of a new organism, and sometimes they’re quite dramatic, but a single mutation shouldn’t determine the species.

There’s a chance this moth looks unusual because of a mutation and may be a better-known species. But as with everything about this moth: that’s entirely speculative. We do know that new species are found almost daily in Southern and Central Africa, so there’s a good chance more will come out about this moth in the future.