Despite its name and similar appearance to a squid or an octopus, the vampire squid is actually neither of the two. It’s a cephalopod that’s found at deep-sea, and is the only surviving species in its order known as Vampyromorphida.

Vampire squid physically resemble octopuses, but their eight arms are united together by a webbing of skin and it has two long sensory filaments, which further distinguish it.

Its scientific name Vampyroteuthis infernalis, means ‘vampire squid from hell’, but this is misleading. The vampire squid doesn’t feed on blood, its name was inspired by its dark cloak-like webbing. 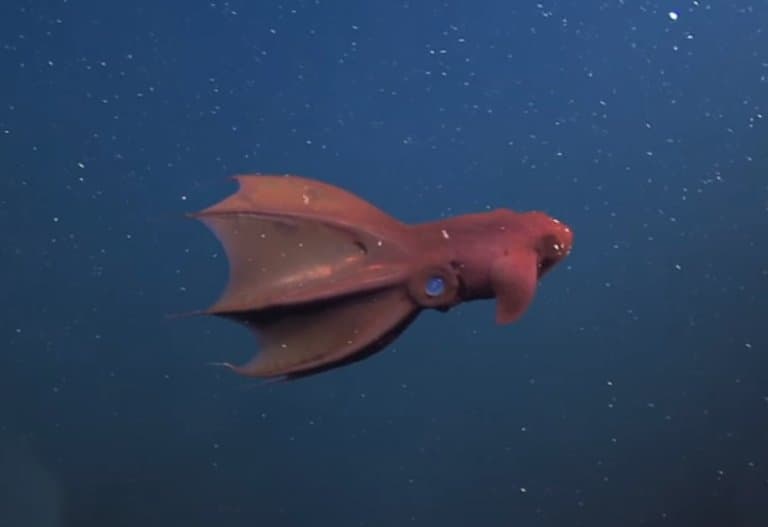 The vampire squid inhabit depths in the tropical and sub-tropical seas across the globe where little light infiltrates, with the majority of them living at between 1,500 and 2,500m below the ocean’s surface, where oxygen levels are extremely low.

The vampire squid is a relatively small cephalopod, reaching around the size of a football in adulthood, with females being larger than males.

They vary from black to rust red in colour, depending on where they are found. The main part of the body containing the organs (known as a mantle) has two dorsal fins and two large eyes, which can appear blue or red in different lights. Attached to the mantle are eight arms that are linked together with webbing, with the inner surface of each arm having suckers (found on the distal half only) and fleshy spikes, called cirri. They have two long sensory filaments that protrude further than the mantle and arms combined.

The vampire squid also has photophores (light producing organs) covering parts of its body, which can flash for differing amounts of time. They look like little white discs and are more concentrated on the tips of the arms and at the bottom of the fins.

The vampire squid is a scavenger and feeds on marine snow, which is essentially dead organic matter that floats down from the upper layers of the ocean. A mucus on its sensory filaments, as well as hairs, helps trap marine snow and this is then scraped off with its arms. A mucus is then excreted by the suckers on its arms, which envelops the food particles. This ball of mucus and food is then moved up to the mouth in the mantle using the cirri on the arms.

The vampire squids conservation status is least concern, and they are not currently thought to be endangered, but are threatened like many ocean creatures, due to ocean warming, decreasing oxygen, polution and over-fishing which all impact them.

1. They can live in suffocating oxygen saturations as low as 3%

The extreme sea depths the vampire squid lives are known as the oxygen minimum zone (OMZ). In this zone, the saturation of oxygen is too low to support most sea creatures.

However, the vampire squid is well adapted to this type of environment, having a large gill surface area to help maximise oxygen absorption, a slow metabolic rate, and an efficient oxygen transport system within the body.

The vampire squid is the only cephalopod to be able to live their entire life in this zone.

2. The vampire squid will glow to escape predators

When a vampire squid is threatened it will initiate parts of its body to glow, such as areas of the arms and fins. They then thrash these around, which makes it very difficult for the predator to determine exactly where the vampire squid is located.

It then expels a mucus from its body that also appears to glow, which aids as another distraction and hiding technique. This glowing mucus can stick to the predator, meaning they are exposed in the otherwise dark sea to other potential predators – like rasing a ‘burglar alarm’.

3. It can turn itself inside out to help avoid predators

Their webbed arms can turn inside out, enclosing its mantle and helping it avoid detection and predation.

Changing its shape makes it look different and helps disguise it from lurking predators. Also the cirri and suckers on its inner arms make it look quite spikey, which helps deter them! 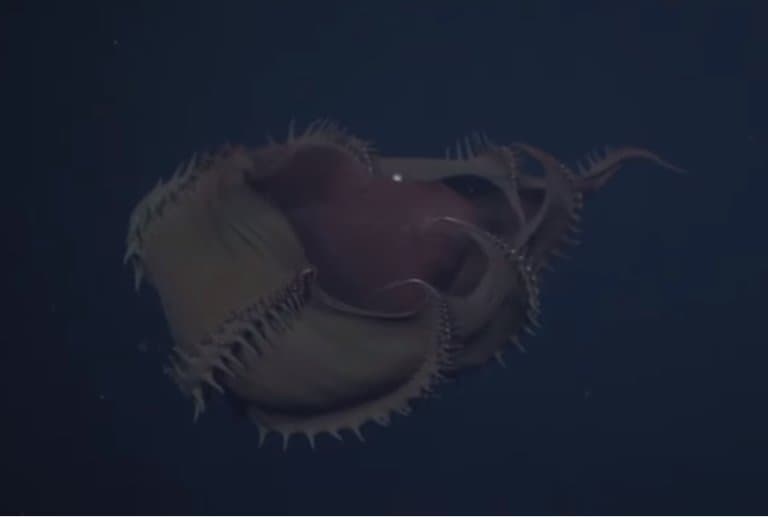 4. When it was first discovered people thought it was an octopus

In 1903 the vampire squid was first discovered and scientists thought it was an octopus because of the webbing between its arms and the fact that it has fins on the top part of its body/mantle.

After further studies it was found to be very unique, and not an octopus at all.

5. They have a special sensor that helps their balance

Vampire squid have a sensor known as a ‘statocyst’, which is a fluid and air filled sac that helps send messages to the brain to keep their balance in check and match the density of surrounding water.

This means the vampire squid neither floats or sinks, and can hang about in the darkness. 1

5. They have sensory filaments they can use like fishing lines

As well as their eight arms, they have two sensory filament that extend up to eight times the length of the vampire squids body.

These are covered in tiny hairs and are extremely sensitive to the surroundings, possibly helping it detect food, and act like mobile spider webs to collect dead sea matter to eat.

This is one of the things that makes them so unique from other cephalopods, most of which are active hunters that will attack prey for their food.

You can see one of these long sensory tentables extending in the image below. 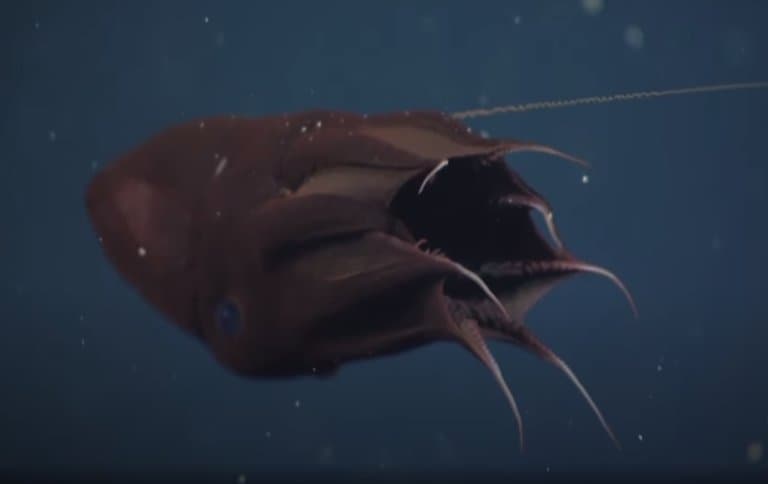 7. It has the largest eyes in the animal kingdom, proportionally

As it lives at depths where little light penetrates, the vampire squid has relatively very large eyes to help it absorb as much light as possible.

Compared to its body size it has the largest eyes of any animal on the planet today.

Thie large eyes can look either blue or red, but are actually they are clear and are just reflecting the surrounding water when illuminated by the remotely operated underwater vehicle camera lights. 2

While they live in tropical waters, as they live at low depths in the ocean the temperature of the water is pretty cold. They are usually found in waters between 2-60c.

9.  They have jet propulsion

The vampire squid uses jet propulsion by emitting a jet of water from its mantle, fin flapping and web pulses to help move swiftly through the water (although in adults it is primarily fin flapping).

It can move relatively fast for short periods of time, but cannot sustain this for a long swim.

They lack the pigment sacs and associated muscles that octopus and squid have that contain chromophores (a chemical that absorbs light) that allow them change colour.

11. They don’t like to use up too much energy

The shape of the vampire squid means it is very buoyant and doesn’t have to use vast amounts of energy to keep it moving through the water.

They also have a low metabolic rate and do not expend large amounts of energy feeding.

If a vampire squid gets caught by a predator by one of its limbs and the limb gets bitten off it can actually regrow the limb. This is a great technique to potentially save its life. 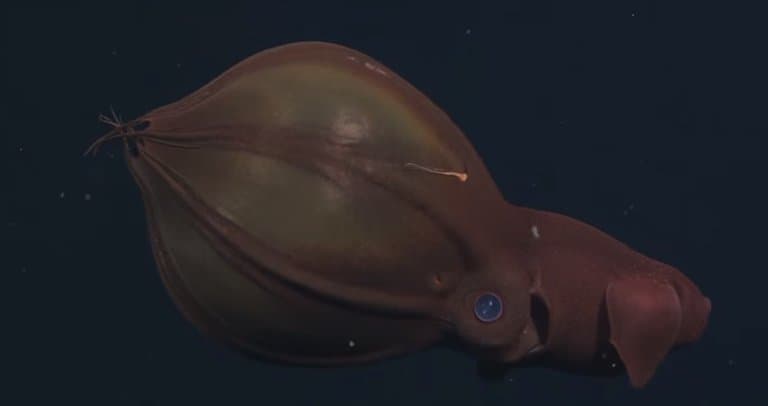 13. During part of their lifetime they have four fins, not just two

When vampire squid are in a specific juvenile stage of their life they actually have four fins on the top part of their body (mantle).

Two of these eventually get absorbed into their bodies, leaving them with just two fins left.

14. Reproduction of the vampire squid is unlike any other cephalopod

Unlike most other cephalopods, the vampire squid reproduces multiple times.

The male vampire squid will transfer its sperm to the female using a part of its body known as the funnel (it also uses this for movement and respiration). The female holds on to the sperm until the optimal time and then uses it to fertilise her eggs.

These fertilized eggs are released into the water little by little. The eggs are relatively large at this stage, being 3-4mm in diameter.

It is thought that female vampire squids go through many reproductive cycles, with the female producing more than one set of eggs in her lifetime. 3

15. It has remained relatively unchanged for the last 300 million years

Compared to its ancestors the vampire squid remains pretty much unchanged and they are known as a living fossil.

Despite this and due to its deep-sea habitat, we still know relatively little about this phylogenetic relict. 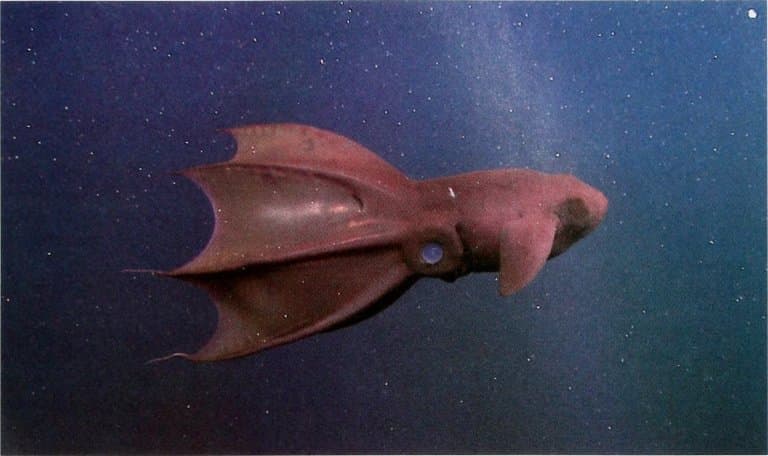 16. They have a connection with an investmant bank

There’s a famous Rolling Stone magazine article which was written in 2009 by Matt Taibbi that referred to to Goldman Sachs, the world’s most powerful investment bank and its role in the 2008 financial crisis as:

“a great vampire squid wrapped around the face of humanity, relentlessly jamming its blood funnel into anything that smells like money.”

Now you know more about the vampire squid, this feels both inaccurate and unfair on the creature! 4