Across the ages, snakes have struck fear into the hearts of many. The chilling effects of their venom are known far and wide.

Across the globe, there are over 3,700 species of snakes; however, not all of them are venomous. There are 600 that are venomous and only 200 species that are capable of killing or injuring a human.

By definition, venom is a toxin that is secreted or injected by an animal into its victims through a bite or a sting. This is different from poison, which enters its victims via inhalation, swallowing, or absorption through the skin. 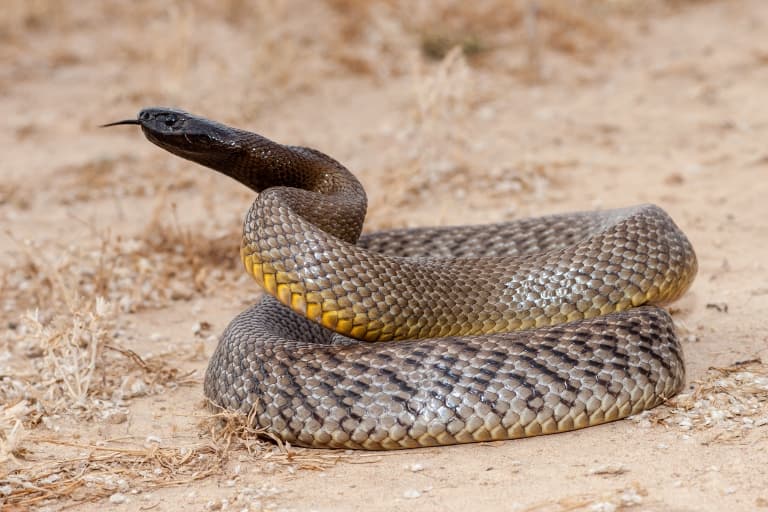 Venom is an extremely valuable tool for a snake. It can be used to deter predators as a form of self-defense. In addition, venom helps snakes overpower their prey, aiding in immobilizing them and preparing them for consumption.

Each year, an estimated 5.4 million people are bitten by snakes, with 2.7m from venomous snakes. Between 81,000 to 138,000 perish due to snake bites. Venomous snakes are also responsible for causing more than 300,000 amputations and severe injuries. 1

Most of these bites occur in Africa, Asia and Latin America. 2m each year are bitten by venomous snakes in Asia alone, which is 75% of all envenomings.

Those affected are typically from poor rural communities, often agricultural workers and children who play outdoors who are impacted by the consequences of venomous snakes. Children have smaller body masses, and so, are more susceptible to developing adverse effects.

The health systems in these low and middle income countries is often weak, while medical resources and transport in emergencies can be sparse.

Many of the world’s most venomous snakes live in tropical regions, but some live in oceanic waters. There may even be some living in captivity.

The potency of a snake’s venom can be quantified by its LD50. This is the median lethal dose or concentration required to kill half of a test population. The lower a venom’s LD50, the more deadly.

The inland taipan’s venom is so lethal that one bite is enough to kill a hundred men. It paralyzes the victim’s muscles and induces respiratory arrest. Its venom also has hemolytic properties, meaning it damages and breaks red blood cells apart.

When they attack, inland taipans move quickly with several strikes. Due to their ferocity, they have earned the nickname, “the Fierce Snake”.

Despite being the most venomous, they are not the deadliest snake as they rarely come into contact with humans, as they inhabit remote bush in Australia.

There have been no recorded deaths since the creation of the anti-venom in 1955. 2 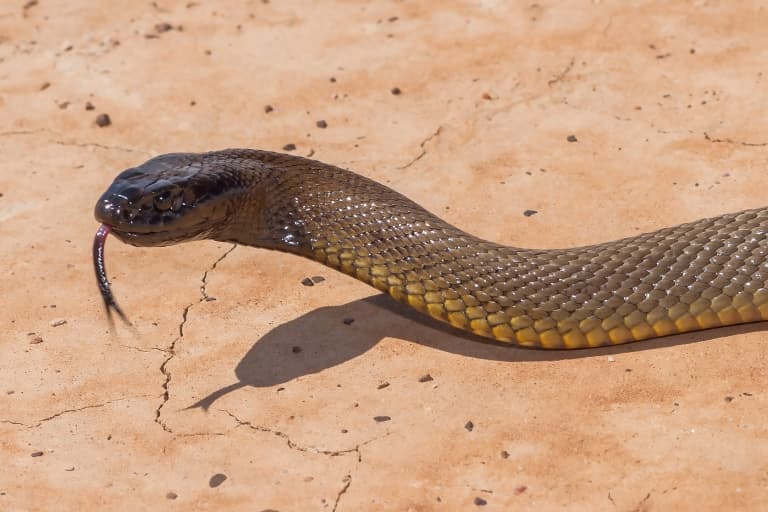 It preys upon fish and eels, as well as small invertebrates that live on the ocean floor. In general, the Dubois’ sea snake has quite a docile nature, but it will attack if provoked.

Interestingly, this snake’s fangs are relatively short compared to other snakes, measuring just under 2 mm long. It is a crepuscular species, so it is most active at dusk and dawn.

Eastern Brown Snakes are found across the east coast of Australia and are the second most venomous terrestrial snake in the world.

They belong to the Pseudonaja genus and live in grasslands, woodlands, as well as urban areas.

These fast-moving snakes are diurnal but when the weather’s warm, they may become nocturnal to avoid the heat. It has been reported having cobra-like behaviors. When threatened, it will rise up off the ground, coil its neck, and open its mouth in a fearsome display.

The venom of the Eastern brown snake can cause convulsions, renal failure, paralysis, and cardiac arrest. When someone is suspected to have been bitten by an Eastern brown snake, it is recommended that they remain as still as possible to limit venom spread. 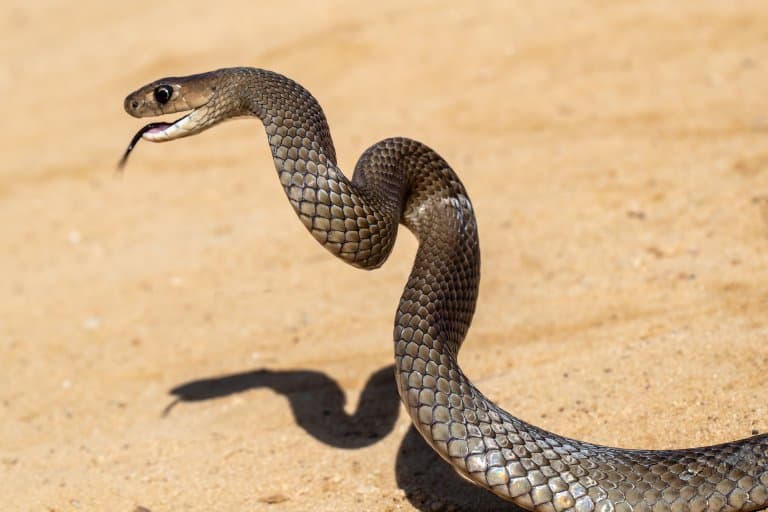 These fascinating sea snakes can be found swimming in the open ocean, hundreds of miles from the coast. They occupy waters along the shores of eastern Africa, northern Australia, southern Asia, and the western side of Mexico.

Yellow-bellied sea snakes can dive and remain underwater for over an hour. It hunts fish, paralyzing them with its venom, and consuming them head first. This species appears to have few natural predators.

Their venom contains powerful neurotoxins that can cause paralysis in humans.

This species (O.temporalis) was first encountered in the mountain ranges of Australia. Compared to other taipans, this species has been less studied by researchers.

The central ranges taipan mainly eats rodents, and they prefer dryer sandy climates. It is unclear as to how large these snakes can grow, but it is suspected they can reach lengths of more than 3 feet long.

If bitten, a human can succumb to the venom within hours if medical attention is not given. 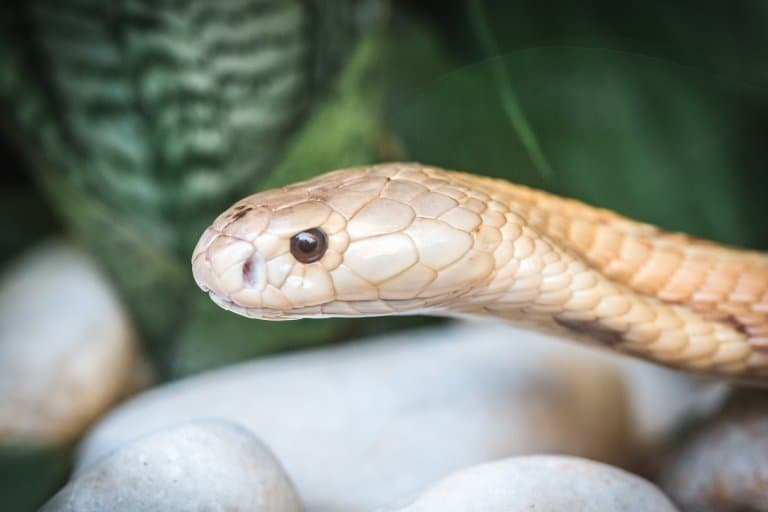 The Peron’s sea snake is commonly known as the horned sea snake or the spiny-headed sea snake. The IUCN has it listed as a species of least concern and populations are stable. Fishing and habitat loss are their biggest threats.

These spiky reptiles dwell along the southern coasts of Australia, as well as in Indonesia, and southern China. As strong swimmers, they can dive to depths of up to 60 meters.

Kraits are closely related to sea snakes and cobras and can be found in China and Southeast Asia. They produce neurotoxic venoms that damage neurons and induce paralysis.

The banded krait is armed with venom that is 10 times more lethal than a rattlesnake’s. Bite victims merely feel slightly itchy and numb, before more severe broader symptons such as struggling for breath can arise. Luckily, attacks on humans are rare.

The coastal taipan (Oxyuranus scutellatus) is the last species of snake that makes up the three genera of taipans.  It is the largest snake belonging to the Elapidae family, a group of approximately 300 snakes that have short fangs on their upper jaw.

They can be found across coastal regions of northern and eastern Australia and the island of New Guinea.

The coastal taipan is the third-most venomous terrestrial snake in the world and has a high level of notoriety in Australia and is generally more feared than any other snake. 3

Timely treatment is critical as more than 80 percent of untreated cases are fatal. 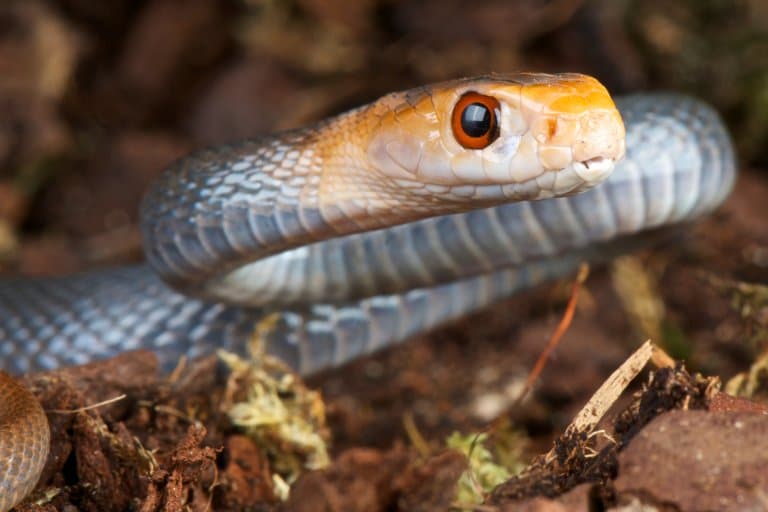 The black-banded sea krait is most often found in temperate latitudes in the Indian and western Pacific oceans. They prefer to inhabit coral reefs.

Compared to sea snakes, banded kraits tend to spend more time on land. They will come ashore to nest, feed, and shed their skin. Exceptionally skilled at hunting, these snakes can hold their breath for long periods of time.

Their potent venom attacks the human nervous system and can lead to convulsions, paralysis, cardiac failure and death. 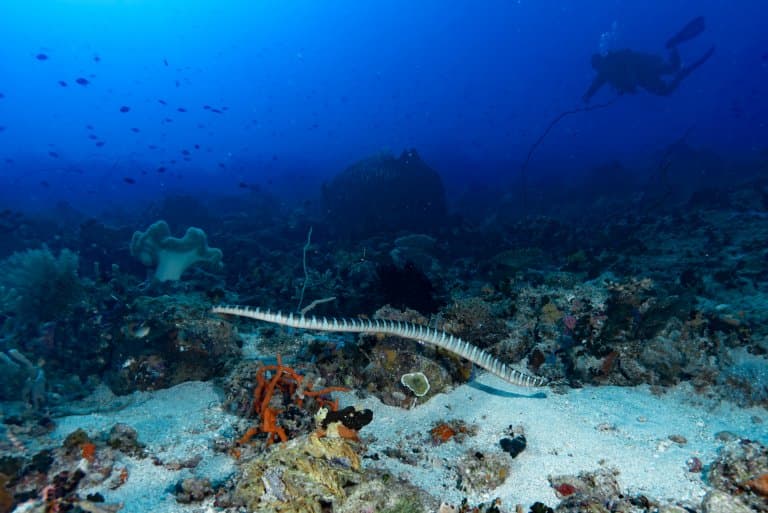 The beaked sea snake (Enhydrina schistosa) is a medium-sized snake that grows up to an average of 4 feet in length. Like the many banded-krait, females are larger than males.

They are one of the most common sea snakes found along the coast of India, the Arabian Sea, Persian Gulf and seas around South Asia.

Their nostrils are located on the surface of their snouts and can be voluntarily closed when the snake is beneath the surface. It prefers to feed on fish while other sea snakes have been documented preferring eels.

This sea snake is so widely distributed it’s thought that it’s responsible for 90% of all deaths from sea snake bites. 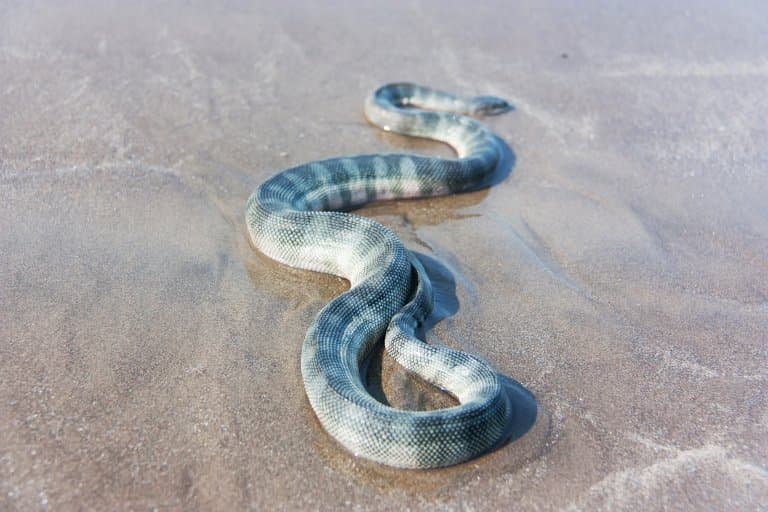 Often the most deadly snakes to humans, are not the most venomous.

Snakes that come into more frequent human contact, particularly in low income countries, with rural communites with weaker healthcare systems can be responsible for more human deaths, than the most venomous snakes.

Some of the snakes in our most venomous list are sea snakes, and therefore rarely come into contact with humans. While some venomous snakes, are reluctant to bite anyone.

The inland taipan is a great example. It’s by some distance the most venomous snake in the world, and yet there isn’t a recorded human death from a bite since 1955, as they are solitary, rarely aggressive, and live in the remote Australian bush.

In fact, there are less than 500 snakebites with envenoming each year in Australia, and only 2-3 fatalaties each year. While 80% of the top 10 most venomous snakes can be found in, or around Australia, the most deadly snakes are not Australian. 4

Of the total 81,000 to 138,000 human deaths each year, it’s estimated that 75% are in Asia, and over 50,000 of them are in the Indian subcontinent alone. 5 Therefore the most deadly snakes in the world are from across this region, as it’s where most bites occur. 6

The deadliest venomous snake species responsible for causing the greatest number of medically significant human snake bites are known as the ‘big four’.

The saw-scaled viper is thought to be responsible for the most human snakebites and fatalities each year in the world.

From the size of it, you wouldn’t think they would be that dangerous, measuring up to around 60cm in total. However, they are one of the fastest striking snakes in the world, unpredictable and highly aggressive.

Their range is also vast, from Pakistan, India, Bangladesh, Sri Lanka, Middle East and Africa. They can frequently be found in populated regions

They have lethal venom and mortality rates are extremely high for those bitten.

The lethal dose of venom required for a human is around 5mg, and it may inject as much as 12mg. Symptoms include hemorrhaging, hypovolemic shock, acute kidney injury and death. Antivenoms are essential for survival, and the mortality rate is thought to be around 20%.

Russell’s viper is responsible for more human fatalities in India than any other snake species, causing an estimated 25,000 fatalities annually.

It’s found across the Indian subcontinent in India, Sri Lanka, Bangladesh, Nepal, and Pakistan. In many regions such as Punjab and the west coast, it’s extremely common in open grasslands and farmland.

They primarily feed on rodents such as rats, which means they can be found in highly urbanized areas and settlements in the countryside searching for prey. This is where they can come into contact with humans.

They are aggressive and can be short-tempered and quick to bite.

Their bite is one of the most excruciatingly painful, and can cause internal bleeding, vomiting, kidney failure and death from respiratory, or cardiac failure without medical attention. 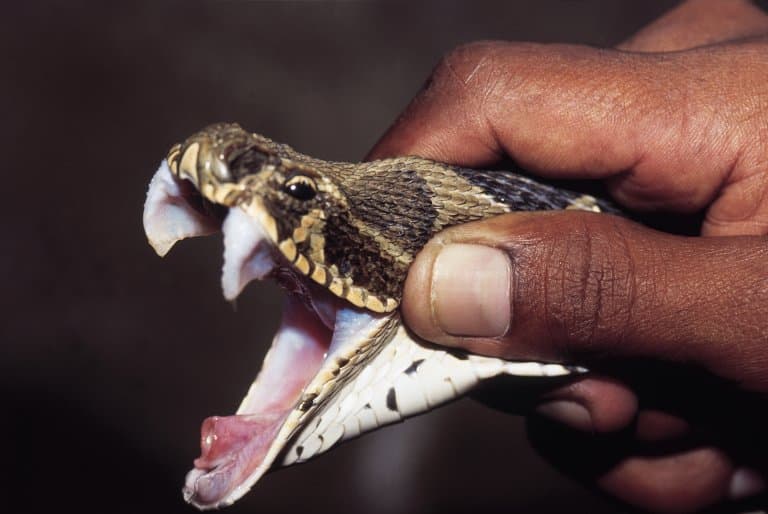 The Indian cobra is responsible for the most snakebites in India each year.

This species of cobra is found in India, Pakistan, Bangladesh, Sri Lanka, Nepal, and Bhutan. It inhabits open plains, forests, farmlands, and urban areas near villages. 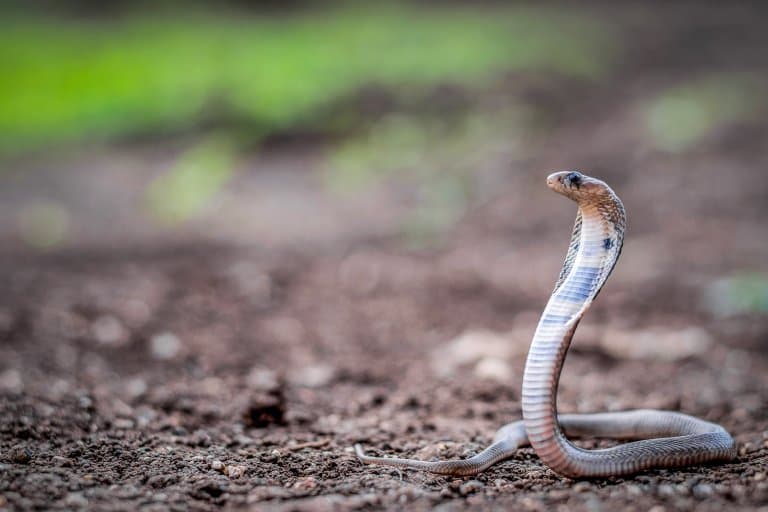 Whille the common krait snake doesn’t cause the most fatalaties in India, it is considered to be the most dangerous snake in India.

This is because of its powerful venom that contains postsynaptic neurotoxins that induces muscle paralysis. Once paralysis has set, it is not reversible even by antivenom.

Death can occur 4-8 hours after bite due to general respiratory failure. The mortality rate of being bitten is between 70-80% without treatment.

The common krait inhabits open grasslands to more urban village areas in Sindh, West Bengal, throughout South India, and Sri Lanka. Fortunately they are reluctant to bite, and nocturnal meaning they are encountered less by humans during the day. 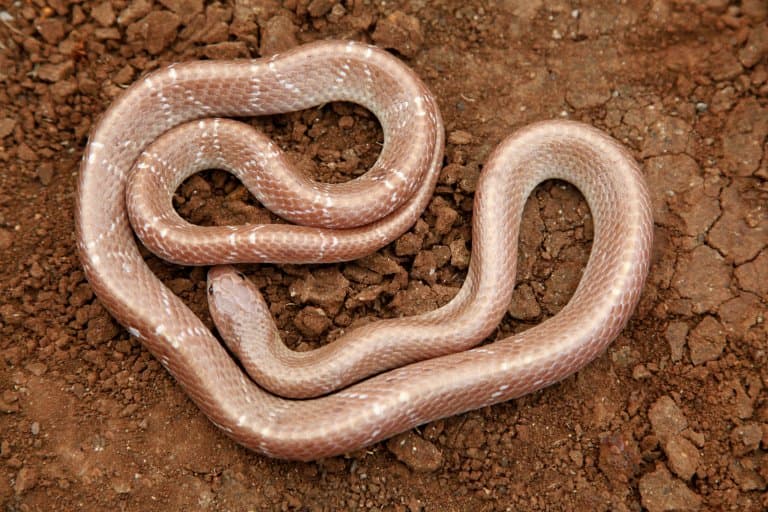 Many animals have evolved mechanisms to help them both thrive and survive – snakes are no exception. The strength of their venoms is demonstrated by the effects they have on their prey and adversaries.

Multiple factors determine how dangerous a particular snake is to humans, not just how venomous they are. In addition to the toxicity of their venoms, these reptiles also vary in their temperaments, how likely they are to strike, their delivery mechanisms, and where they are located.

While many of these snakes don’t have any interest in humans, it is best to be cautious if you ever find yourself in geographic locations known to house these formidable animals.