The tarsier (pronounced TAR-see-er) are small primates found only in the islands of Southeast Asia.

With their velvety fur, small size, and very large eyes – they are at the very top of the cute list. However, there is much more to tarsiers than meets their eyes! 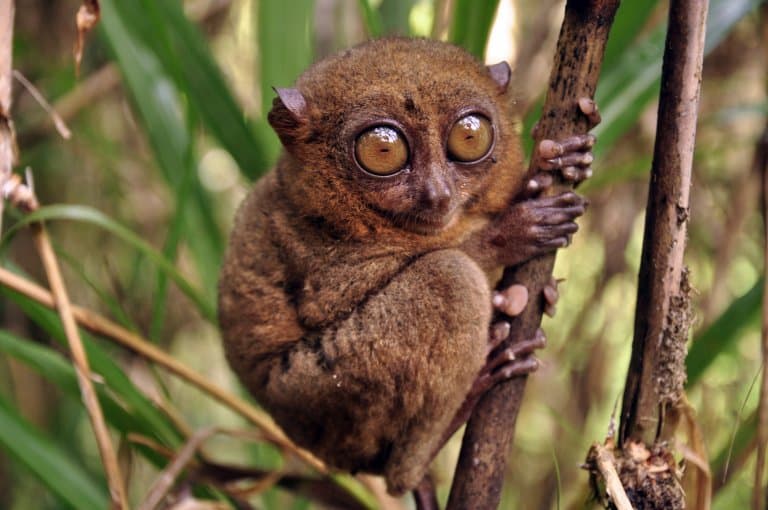 The tarsier is a nocturnal carnivore found in the forests of southeast Asia. They tend to only be found in forests where certain types of vines are found, as they use these for support when climbing.

They sleep on branches near to the ground in dark, dense vegetation. They sleep during the day while holding a vertical branch or bamboo.

They have enourmous eyes and incredible hearing to enable them to catch insects at night.

Pregnancy is around 6 months and tarsiers give birth to single offspring. Baby tarsiers are born with fur and are able to climb within a day of birth!

There are over a dozen of living species of tarsier found in the world now, with more having gone extinct in the past.

1. They’re the only venomous primate

When you think of venomous animals, you probably think of snakes or spiders. However, the tarsier is unique in that it’s the only venomous (and poisonous!) primate.

The tarsier is able to secrete a particular toxin from a gland found in their arm. When in danger, they can mix it with their saliva for a venom that can causes a serious allergic reaction in predators. They also use this venom to make their young poisonous by coating them in the toxin-saliva mixture.

Some scientists argue that this venomous bite, paired with their hissing and other behaviors, evolved as a result of the species mimicking venomous snakes like cobras. 1 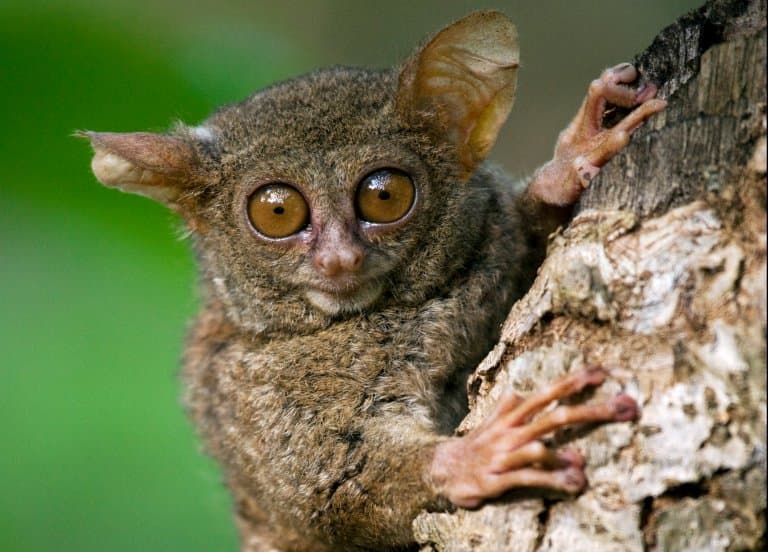 2. The tarsier is notoriously difficult to keep in captivity

Despite packing a painful bite, the tarsier isn’t the daredevil aggressor that you may think they are.

In fact, tarsiers are actually known for their bashfulness, which makes them easy to stress out. Being touched, being kept in a cage or enclosures, bright flashes, large noises – this is just a small list of the things that can cause distress for the tarsier. 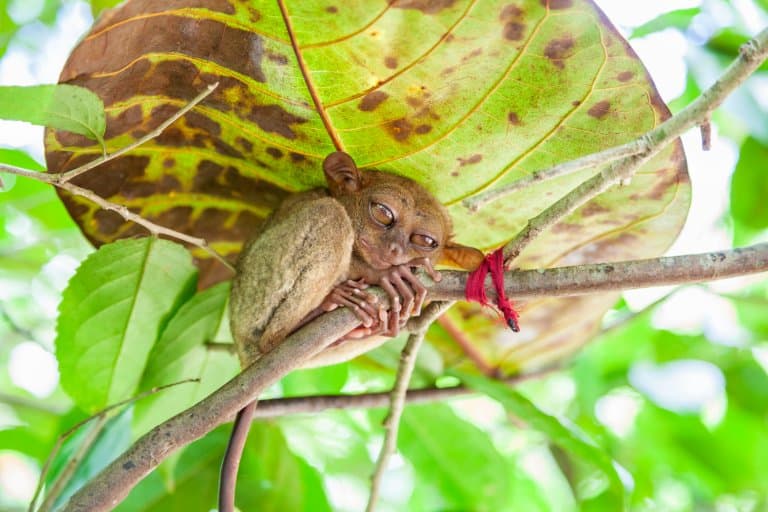 However, this isn’t necessarily why they’re difficult to keep in captivity.

No, the tarsier is notorious for its captivity problems because even the slightest stress in life can cause them to die. As a result, it isn’t considered to ethical to keep them, especially for long periods of time or for non-conservation purposes.

3. There’s over a dozen species of tarsier

Tarisers are any of the primates in the family Tarsiidae. This includes over a dozen species, as well as several subspecies. However, despite being so large, you’ll be able to find all of the species in this family in Maritime Southeast Asia. This includes countries like the Philippines, Malaysia, Indonesia, and Brunei.

Fossil records show that extinct species of the Tarsiidae family used to be more widespread. Some fossils have been found in Africa, Europe, and even North America. However, fossils of currently existing species, known as extant species, have only been found in southeast Asia.

4. Their eyes can be as large as 16 millimeters in diameter 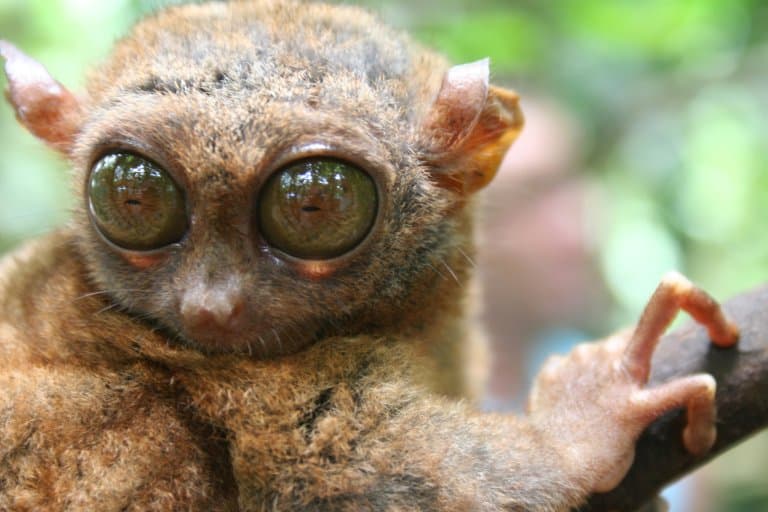 These large eyes are also the cause of their unique and weird skull structure. They’ve had to adapt to such a heavy weight, and so their cranium is designed in such a way to keep them balanced.

Tarsiers have the largest eyes of any mammal on earth, in relation to their body size.

5. Tarsiers can turn their heads 180 degrees like an owl

Snakes aren’t the only animals that tarsiers are stealing some traits from. Because of the design of their necks and upper body, tarsiers, like owls, can turn their head 180 degrees in either direction. 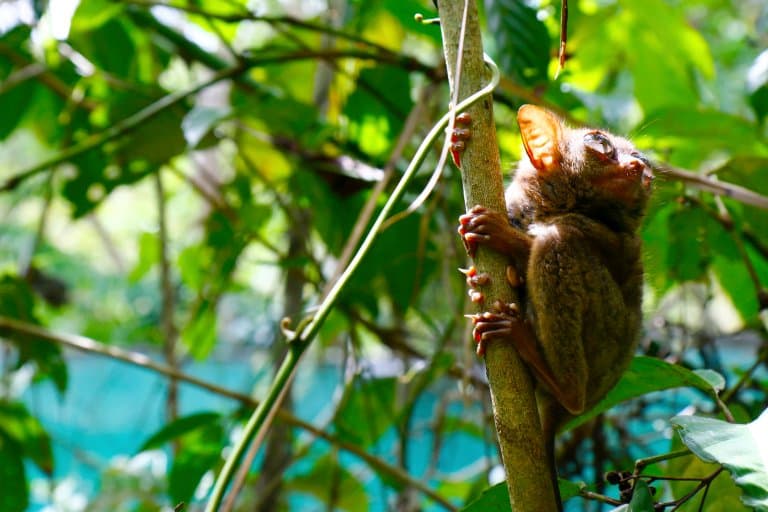 This allows for them to see a total of 360 degrees around them, making it nearly impossible to sneak up on these primates.

6. Some species can hear frequencies as high as 91 kHz

The Philippine tarsier is capable of hearing super high frequencies, some up to 91 kHz (or 91,000 Hz).

Not sure just how loud this is?

Even dogs with their super hearing can only hear up to 65 kHz, and humans can typically only hear up to 20 kHz. Only a handful of other mammals, including domestic cats, some bats and rodents, make ultrasonic calls. 2

7. They’re the only entirely carnivorous primates.

Another one of the most shocking facts about the tarsier?

They’re the only species of primate that is completely carnivorous. That’s right, even larger primates like most monkeys and gorillas still eat fruits or vegetation. However, as insectivores, only insects are making their way on to the typical menu for the tarsier. 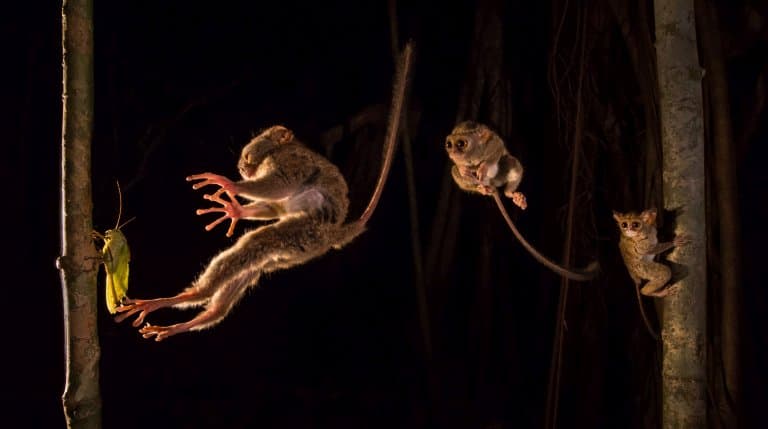 That’s not to say that’s all they eat though.

Some tarsiers have even been known to eat birds, small reptiles like snakes or lizards, and bats.

8. Tarsier groups are known for fighting together

Tarsier social dynamics can be difficult to navigate. On average, groups only consist of a single male, known as an alpha male by some.

However, when a predator is present, this isn’t always the case.

At first, a tarsier will sound off with a loud vocal meant to alert others as well as threaten the predator. Other groups may also join in when they hear this call, which means that you may have multiple males attacking a single predator with their venomous bites before they separate again. 3

The hind legs of a tarsier are twice as long as their body, and muscular – making them particularly specialized for leaping. They spring between trees and branches to catch insects.

Comparatively, if humans had similarly proportioned legs as a tarsier, we would be able to jump over five double decker buses.

10. Their third finger is long, and about same length as their upper arm

Their fingers are tipped with sticky pads and nails that help them grip when climbing and leaping, alongside their slender tail for balance.

The second and third toes on their feet have claws instead, which they use for grooming.

11. Sadly they are vulnerable to extinction

While they are one of the oldest existing primates, they are a conservation dependent species with rapidly shrinking habitats and at risk of extinction.

Various plantations have replaced the dense vegetation where they live, and they do not breed well in captivity. The Siau Island tarsier is regarded as critically endangered and is among the worlds 25 most endagered primates.

Focused and wide-ranging conservation efforts are required to preserve all species of tarsier.