Sometimes called moss piglets, water bears, or slow-steppers, their faces look sort of like a rolled-up towel with legs. Tardigrades are eight-legged micro-animals, and found everywhere, even in the most diverse and extreme conditions, and they cannot be stopped.

The good news is that they’re harmless, and in many cases microscopic. These cute little freaks are opening countless windows of research for scientists! 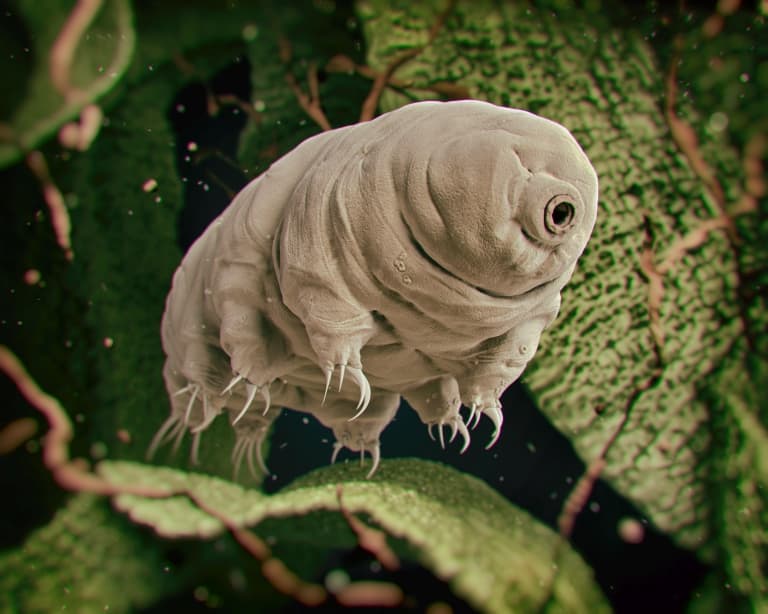 Tardigrades are some tough customers. They’re perhaps the most decorated explorers in the animal kingdom, having ventured to every corner of the globe and beyond.

They can be found living on mountaintops at altitude, to deep sea, from rainforests, to desert, and from the equator to the Antarctic.

They prefer moist and wet environments and are generally found on lichens and mosses. They are common around coastal areas, in soil and leaf litter, where they can occur frequently with up to 25,000 of the micro-animals per litre.

Most tardigrades eat plants or bacteria, but some species are carnivorous and diet on other smaller species of tardigrades.

They’re very strange, and hard to classify, but there is some progress being made in that regard. And they’re tiny! So tiny, they may be closer to you than you’re comfortable with.

They are thought to have survived all give recognised mass extinctions on earth, due to their incredible survival characteristics which kill virtually all other animals and life.

We all know of hibernation: a state of reduced metabolic activity that allows an animal to use minimal resources and survive a period of short supply. However, tardigrades go one further than this and can reduce their biological functions to the point of entirely ceasing to be. At least, temporarily.

This state of ‘cryptobiosis’ resembles death, except it’s totally reversible. This allows them to survive in the most extreme conditions known.

Tardigrades can withstand heat, cold and even the vacuum of space by shutting off their bodily functions entirely until environmental conditions become more favourable. 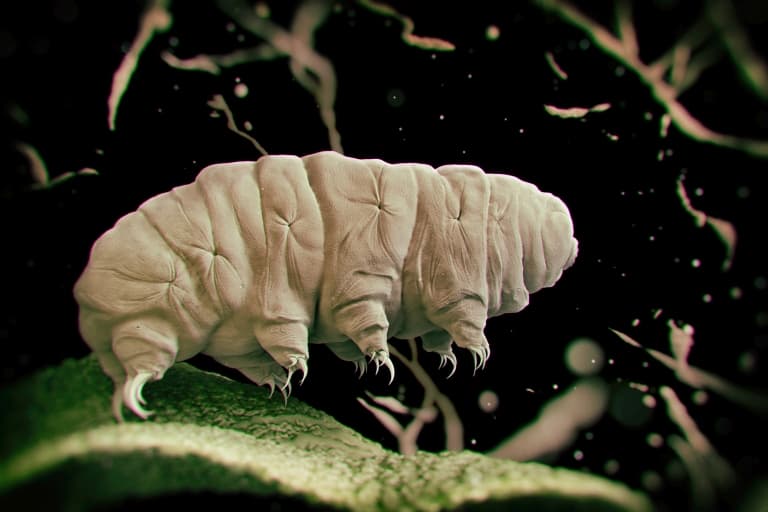 When scientists discovered the potential resilience of these little animals, their inner child kicked in.

The beauty of being a scientist is that once you’re qualified and respected enough you can actually get someone to pay for these things to happen. Now, there are some pretty tough animals out there, but many of them weigh too much to strap to a satellite. Fortunately, this isn’t a problem for tardigrades, and in 2007, the ESA sent some up to see what would happen.

These tardigrades were dried out and rocketed into space, and ten days later returned to earth and rehydrated.

The results were mixed.

While most of the samples that were protected from the sun’s rays immediately recovered and set to work reproducing, most that weren’t shielded from the powerful UV rays didn’t make it.

Still, the survivors from both samples are the first of their kind to survive such harsh conditions, able to survive the vacuum of space and, in some cases 1000x more UV radiation than they’re used to on Earth. 1 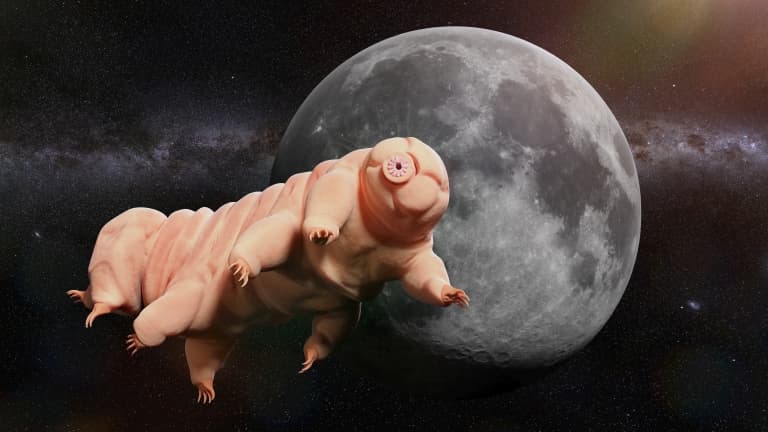 3. Tardigrades are not hard to find

Although they can be hard to see due to their size.

Just go outside on a damp or wet day and look under some moss.

They’ll likely be lots of tardigrades moving about in the water, like a shruken microscopic caterpilla-cum-woodlouse.

4. Their bodies are weird

Tardigrades are thought to be somehow related to insects, though it’s far too early to jump on that taxonomy bandwagon. They may instead be related to nematode worms, but again, it’s better to let the taxonomists battle it out among themselves for a few decades before committing to either.

What we do know, is that they’re very different from either.

In your body (hopefully) there are some special genes called HOX genes that were responsible for telling your embryonic self where to put your arms and legs and which end your nose should go.

Tardigrades seem to be missing a lot of these genes, and most of their legs sort of come out of their head.

5. They are part worm, part insect

Unlike both nematodes and insects, they have four pairs of these legs, and they’re all jointless. Their skin is made out of chitin, much like insects, but that’s also common in the eggshell and pharynx of nematodes.

Their last segment contains the final pair of legs, with four to eight claws, which are aimed backwards and used to grasp the substrate, sort of like a caterpillar. They also feed like a nematode, with a specialised pharynx called a stylet, which is injected into its prey.

The most recent research has rejected the idea that they’re related to nematodes, but even nematode experts can’t categorise nematodes very well, so that’s hardly surprising. The closest idea we have is that they’re somehow related to arthropods and Onychophora, which really just opens up another can of worms.

The highest resolution of classification we reliably have so far are the two classes of tardigrade that sound like playground insults: Eutardigrada and Heterotardigrada.

6. A dehydrated tardigrade is known as a ‘tun’

If a tardigrade loses 99% of its body water content, it goes into cryptobiosis where it suspends it’s living processes.

A tun’s metabolism lowers to as little as 0.01 per cent of its original rate and can even be carried in the wind, like a seed or spore.

That word gets thrown around a lot, but typically, an extremophile is one that not only survives but thrives in extreme conditions.

While tardigrades can survive in conditions that would kill pretty much anything else, their stat of cryptobiosis means they’re not exactly thriving.

In fact, they’re not really doing much of anything at all.

8. They were called ‘little water bears’ due to the way they walk

This was coined by the German naturalist Johann August Ephraim Goeze who first described them back in 1773.

9. They can be killed, eventually

Perhaps inspired by those intelligent and highly-scientific questions from point 2, you may be wondering what would happen if you tried to kill a tardigrade.

They can survive 6,000 atmospheres of pressure, a complete vacuum, they can be thrown at the wall at 900 meters per second, desiccated for ten years, irradiated to 1000x the amount of any other animal, and bounce back from some extreme temperatures.

Here are some of the life expectancies for these animals at different temperatures:

This is colder than space, and absolute zero is only a degree colder than that. One thing they’re vulnerable to, however, is rapid temperature changes.

We know all this because, well, we tried it.

Thankfully, tardigrades are quite peaceful animals with no concept of revenge, so we don’t need to devise any elaborate ways to wipe them out, however, they do potentially provide us with new and novel strategies to preserve life. 2

10. There is probably tardigrade sperm up your nose

And in your eyes, in your lungs, pretty much anywhere that’s exposed to the air. Tardigrade fertilization is external, so there’s probably tardigrade gamete matter pretty much all over you.

Tardigrades lay eggs in the discarded cuticle of a moult. They’re then covered with sperm and could end up anywhere.

The widespread distribution of these tiny animals is attributed to the fact that the eggs are so tiny they can be carried all over the world. 3

11. A new species was found to resist intence ultraviolet radiation

In October 2020 researchers at the Indian Institute of Science in Bangalore discovered a new species that produces a fluorescent substance ‘shield’ that absorbs UV radiation and subsequently releases the energy as a harmless blue light.

However, scientists don’t yet know what the flurescent substance is or exactly how it’s protecting the tardigrade from radiation.

If the substance can be identified, it could be utilized in the future for humans in the form of sunscreen.

This might sound like a lot, but the human body has somewhere in the vicinity of 37 trillion cells (some more than others), and tardigrades may have as few as one thousand.

Despite their tiny bodies, tardigrades have a functioning digestive system. As they grow, they make these cells larger, rather than adding new ones. 4 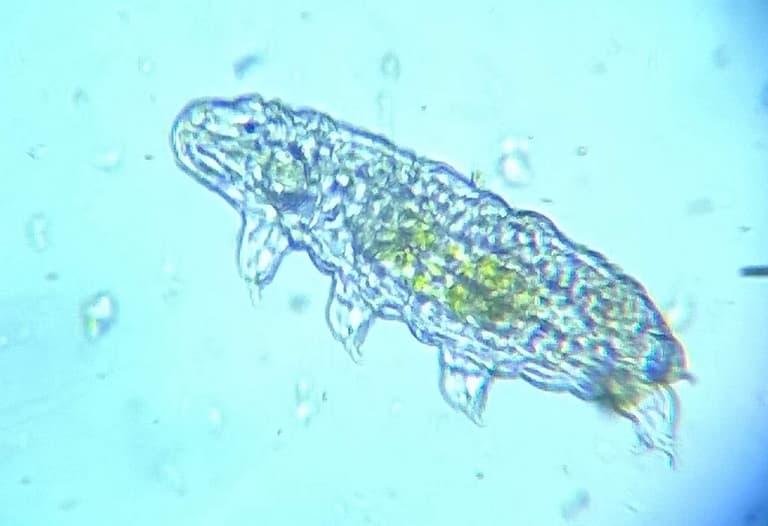 13. Living for hundreds of years is a myth

While they may sound invincible, tardigrades typically live from 3 to 30 months and only have a few weeks of ‘active’ life.

The time between when a tardigrade is born and it dies might be very long if it goes into their inactive ‘super-hibernation’ state, but in reality they don’t really live for particularly long!