Tapir are herbivorous mammals that live in the jungles and forests of South and Central America. They have short snouts, resembling that of anteaters, that enable them to grab onto branches and leaves.

Weighing hundreds of pounds, the tapir is the largest land mammal in South America. They are often confused with pigs or small hippos, but they are actually more closely related to horses and rhinos. 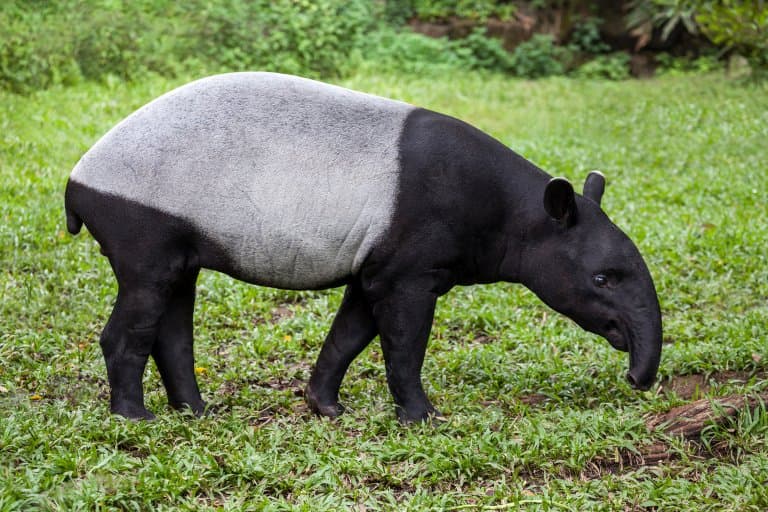 Due to their large size and proximity to civilization, tapirs are unfortunately adversely impacted by humans.

Practices such as deforestation, farming, and plantation development have led to marked reductions in tapir populations. Their conservation status is endangered and vulnerable for all 4 species.

Tapirs—because of their size and high sensitivity to environmental changes—are useful indicators of the health of their habitats. In addition, they help recycle forest nutrients and fertilize the soil.

It is estimated that there are only a couple thousand tapirs left on the planet. Further efforts are needed to help protect these beautiful animals.

1. Their noses are multifunctional

Similar to the trunks of elephants, the flexible snouts of tapirs help carry out many daily functions. In addition to grasping hard-to-reach leaves and fruits, it can be used as a snorkel when the tapir is swimming or diving underwater.

It is also an exceptionally sensitive detector of forest odors. 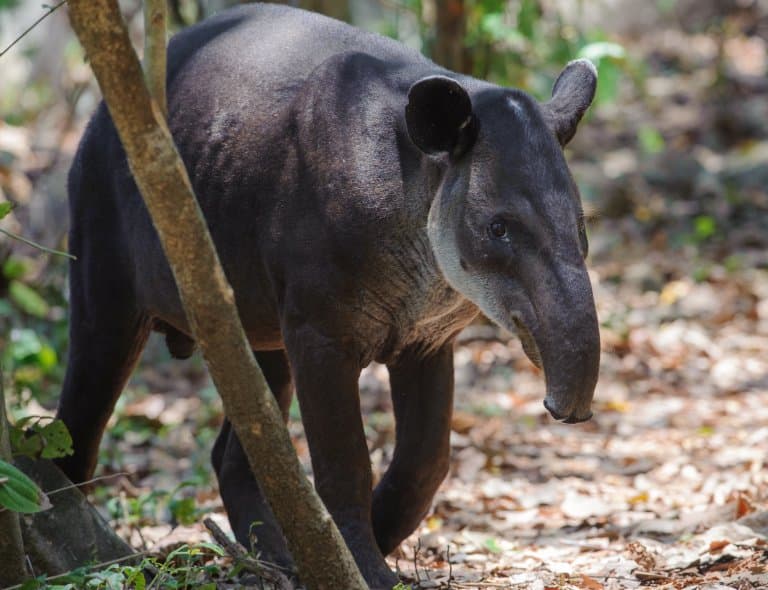 2. They are great swimmers

Tapirs spend a lot of their time in water. They are quality swimmers that submerge themselves in water to cool off.

They have also been observed to walk along the bottom of riverbeds, like hippos, searching for plants to graze on. 1

3. Their front and back feet are not the same

There are four toes on the front feet of tapirs and three on their back feet. These toes are hooved to help them wade through muddy grounds and swim.

4. They have poor eyesight

Tapirs have small eyes and monocular vision. This means that their eyes are unable to coordinate with each other to form one cohesive image.

To make up for this, tapirs have good olfactory and auditory senses to survey their surroundings.

5. Tapirs are active at night

Populations that reside closer to civilization are often nocturnal so as to avoid human contact.

6. The largest tapirs can weigh as much as an adult grizzly bear

Among tapir species, the Malayan tapir is the largest. It can grow up to 800 pounds which is approximately the size of a full-grown grizzly bear.

They reside in areas including Malaysia, Sumatra, and Thailand. 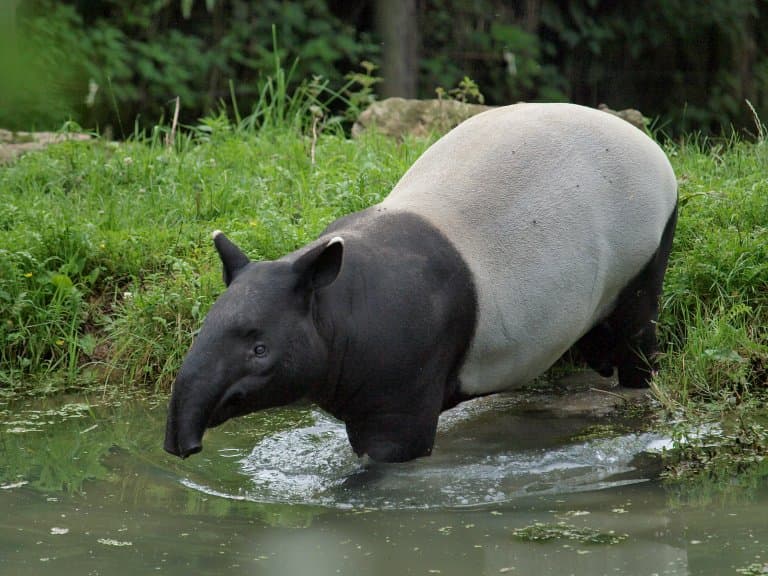 7. They gestate for over a year

Tapirs gestate for approximately 400 days (13 months) before giving birth. Twins are sometimes observed, but they are extremely rare. 2

8. They are very vocal animals

A variety of different vocalizations are used by tapirs to communicate.

They have been observed to produce high-frequency whistles, as well as grunts, to get their messages across. 3

9. All tapir calves have the same markings

Depending on their species, adult tapirs will have distinct coats with unique colors and patterns. All calves, however, have brown coats with white markings.

This striped pattern provides calves with much-needed protection as it allows them to easily blend in with their surroundings. 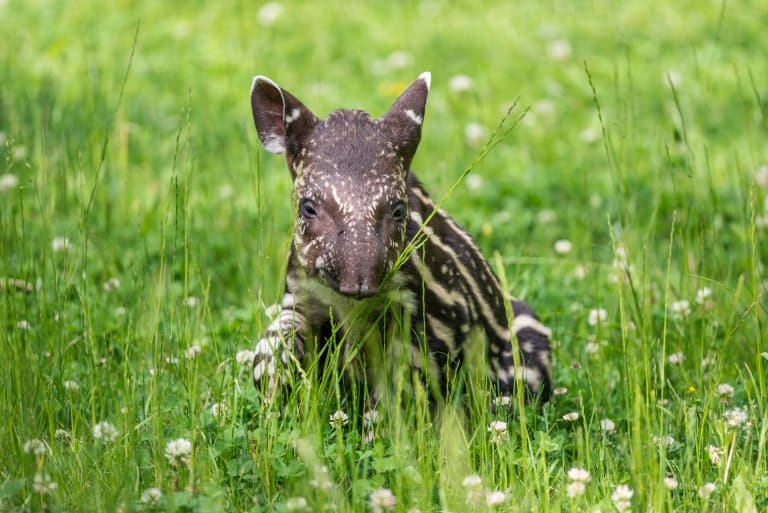 Calves can reach adult size in about a year and a half, and they learn key survival skills very quickly.

Within a couple of hours after birth, they are capable of standing on their own. They can also swim soon after birth.

11. They might be more sociable than we first thought

In the past, tapirs were thought of as solitary animals that only came together to mate.

In recent studies, tapirs have been found foraging for food in small groups, suggesting they might have social tendencies we are not fully aware of yet.

12. They sometimes defecate into water

To evade detection, tapirs will sometimes defecate into local waters. This masks their scent from predators such as large cats and crocodiles. 4

13. Tapirs have been called “gardeners of the forest”

Seasonal fruits and seeds are one of the main food sources for tapirs. After they consume them, tapirs will travel to different locations and deposit droppings (scat), dispersing the seeds throughout forests.

This helps to bring nutrients to the forest floor as well as disseminate various species of vegetation, enriching the overall landscape. 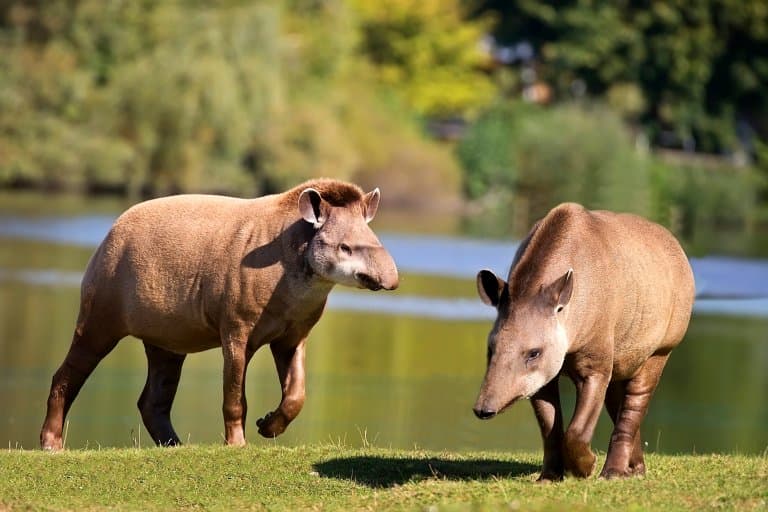 14. Some are hunted for their meat

In Costa Rica, it is common practice to hunt tapirs. Their hides are thick and durable.

Tapir meat is high in fat and is often smoked, cooked in stews, or incorporated into porridges.

Studies suggest that, evolutionarily, tapirs have not changed for millions of years.

They evolved during the Eocene period which lasted from between 56 to 34 million years ago.