Stonefish are a family of fish called Synanceiidae. They are famous for being the most venomous fish in the world, with a sting that causes excruciating pain in humans.

Their name comes from their ability to blend in with rocky seafloors and amongst coral, which is what makes them so dangerous as they are easily stepped on by people. 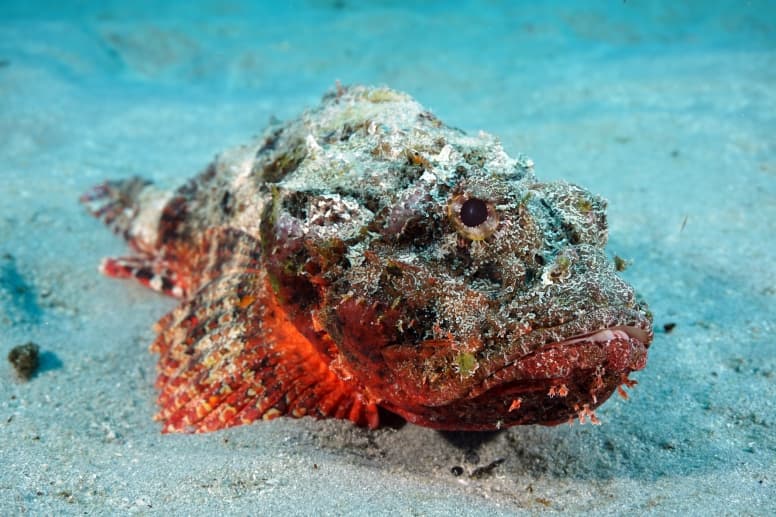 There are 5 species of stonefish:

They are from coastal regions of the Indo-Pacific, for example Northern Australia, India, the Philippines, and others.

They are excellent at camouflage, with their skin matching rocky or coral ocean floors. This allows them to wait for their prey (small fish and crustaceans) to pass, when they strike at high speed and eat them whole.

They are hunted by sea snakes, stingrays, eels, and sharks, all of which are able to eat the stonefish while avoiding its venomous affects.

1. They are the most venomous fish in the world.

The venom is lethal both to other marine animals and humans. It causes intense pain, breathing problems, damage to the heart, fits and paralysis. There is an anti-venom, but if it’s not delivered quickly the effects can be fatal. 1

2. The venom comes from their spines.

They have 13 spines along their backs which are what delivers the toxin. At the base of each spine is a venom sac which are activated under pressure, aka when someone steps on them. 3. Their venom is used for self-defence, not hunting.

Their hunting tactics focus on sitting completely still on the ocean floor, waiting for prey to pass. Their venom is only used for self-defence and they never actively hunt their prey or humans.

4. They are masters of camouflage.

As the name suggests, they are great at looking like a stone, with skin covered in patches of brown, yellow, orange, or red, along with a textured surface. 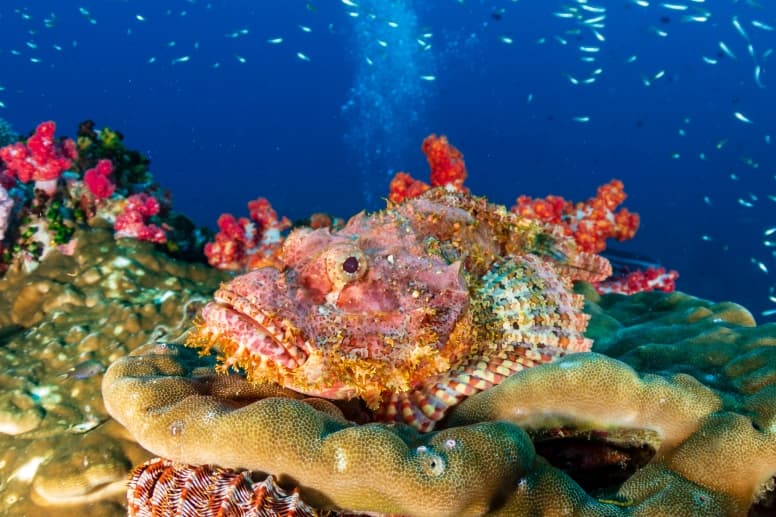 5. They attack their prey fast.

They will sit still watching for prey and then attack and consume the prey with lighting speed, all as little 0.015 seconds.

6. There are a lot of stings, but very few mortalities.

There have been no recorded deaths from stonefish stings in Australia, and few in other countries. There are however lots of stings yearly, which require immediate medical attention. 2

7. They are related to lionfish.

Stonefish belong to the order Scorpaeniformes, which also contains lionfish. These are another highly venomous fish native to the Indo-pacific.

8. They are hunted by sea snakes.

It’s thought that sea snakes may be immune to the venom, but no one knows for sure. Sea snakes inject venom into the stonefish via their bite. Once the stonefish stops struggling they swallow them whole, head first so that their mouths don’t get caught on the spines. 3

They can absorb oxygen through their skins, which allows them to survive when the tide goes out.

They are popular in several parts of Asia, including Japan, Guangdong in China, and Hong Kong. When cooked, the venom loses its fatal qualities. It is also eaten raw, with the spines removed.

11. They feature in an aboriginal dance.

The dance is to warn children of the dangers of the stone fish stings and features a man replicating the pain of being stung.