True flies (Dipterans) make up a diverse order of insects; from the bothersome housefly, through to the lethal mosquito, to the genetically significant fruit fly Drosophila, they occupy every habitat on earth, come in a range of shapes and sizes, and make up over a million species.

Of the 150 families of flies that have been described, there is one that sticks out conspicuously. These are the diopsids, or more commonly known as stalk-eyed flies.

Stalk-eyed flies are so named because they almost all have antenna-like protrusions sticking out of their heads called ‘eyestalks‘. This is where their eyes sit, and aside from offering a wide field of vision, they also act as a club, a signal of genetic fitness and as a potential target for predators.

There are over 170 species, and the largest number of stalk-eyed flies can be found in the tropics, in particular Southeast Asia and Southern Africa. They typically inhabit humid areas with plenty of vegetation, near water sources, such as rivers and streams.

Stalk-eyed flies are small to medium in size, growing up to around 1.2 cm (0.5 inch) in length. They diet on fungi, bacteria and decaying animal matter.

These flies have some peculiar defence and attack mechanisms and they’re a great example of sexual selection in the insect world.

Here are eight things to know about stalk-eyed flies.

1. Not all eye-stalked flies are stalk-eyed flies

There are some other families of flies who sport some pretty impressive eye stalks too.

However, true stalk-eyed flies, from the family diopsidae, have their antennae sprouting from their eye stalks, whereas, in other families, the antennae come from the head.

Unlike their doppelgangers, non-diopsid flies with stalks are usually only present with them in the male of the species. True stalk-eyed flies have stalks in both the male and female.

This is one of the distinguishing characteristics of diopsidae flies, though it cannot be entirely relied upon, because… 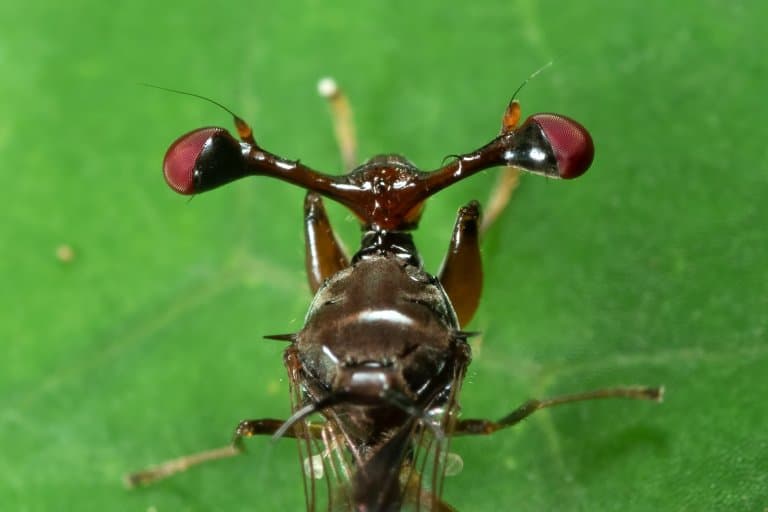 2. Not all stalk-eyed flies are eye-stalked flies!

Didn’t we just say that? Not exactly. Some true stalk-eyed flies don’t have eye stalks!

This confusing contradiction comes from molecular analyses that identify an entire subfamily of stalk-eyed flies that don’t have their eyes on a stalk. The subfamily Centrioncinae has about 22 species of disappointingly normal-looking flies in it.

So, how do they tell them apart from other flies? They look at the genitals, of course. 1

3. These eyestalks expand in 15 minutes

Inside the cocoon, the fly larvae’s optic nerve becomes elongated and narrow and bulges from the head, following the cuticle as it extends outwards. This process occurs in the last 30% of the larva’s development.

Once the adult fly emerges, these appendages are floppy and deflated and the insect must pump them to full turgidity as quickly as possible.

The expansion of these protrusions on the face of the fly occurs at an alarming pace. Much like the transformation of a cursed human into a wolf, the expansion takes place within fifteen minutes.

4. Then, they’re ready to fight

Yes, weirdly, these animals fight by bashing their eyes together. Much like deer, they use their cephalic protrusions to battle with rival males.

These fights begin as a sizing-up contest. Either fly will eye up the other until one of them determines that they’re the smaller rival, in which case they will typically back down.

If this doesn’t happen, an eye-watering battle ensues.

This can involve punches with their forelegs, adapted for this purpose; head-butting and pushing. The winner keeps the territory and access to any females associated with it. 2

5. The eyes also function as a big “EAT ME” sign

Large and conspicuous appendages might be great for impressing females or bashing against your rivals, but they also draw a lot of unwanted attention and can prevent the owner from being able to walk properly.

In stalk-eyed flies, “exaggerated male ornaments” can draw attention from predators, and provide other handicaps such as getting stuck when they try to pass through a narrow doorway.

Studies have shown that somehow, these enormous stalks don’t seem to affect the flight of the male fly, as they compensate for having larger wings.

Females have no such compensatory mechanisms, unfortunately, and as of yet, we don’t know quite how they compensate for the added risk of predation.

However, there are over 170 species, and they’re doing OK for themselves, so something must be working, and some scientists believe it has to do with twerking.

6. Twerking may be the solution

If you were about to be attacked and you decided to start bobbing your abdomen, you might find that your would-be attackers find it too weird to continue. That seems to be the solution for the stalk-eyed flies tested against potential predators.

Male survivors of interactions with predators used this abdomen bobbing to deter them, as well as walking right up to the predators and punching them.

Males with larger eye stalks didn’t seem to suffer any worse fate than those with smaller appendages, and females were recorded as being a lot less able to avoid predation, despite having smaller eye stalks.

So, the evidence is inconclusive as to whether the large protrusions cause more issues from predators, but twerking does appear to be a valid defence. 3

7. They have raptorial forelimbs

To varying degrees, these flies have adapted front legs for fighting.

When in competition, or standing up to predators, they will lunge forward and lash out with these legs. In the subfamily without stalks, this is one of the other ways in which they are identified.

The eye span of a male diopsid is, in many species, an accurate statement of its genetic fitness.

Some populations even carry a genetic predisposition to sire more female flies, and in these cases, the gene associated with eye span is also associated with a suppression of the gene responsible for this female bias.

What this means, is that a male with a larger eye span is more likely to sire male offspring, giving their young a better chance of survival.

In other species, the eye-span signals fertility. In every case, males with eyes widest apart appear to be the sexiest. 4