Imagine if spiders weighed up to ten kilos, were super smart, could leap from trees and barked at you when they felt threatened.

Quite thankfully, there aren’t any gargantuan barking spiders (anymore) – although there are some very intelligent jumping ones! There is, however, a monkey like this.

And its spindly legs and tail have earned it the name spider monkey. They are found high in trees in the tropical rainforests of Central and South America. 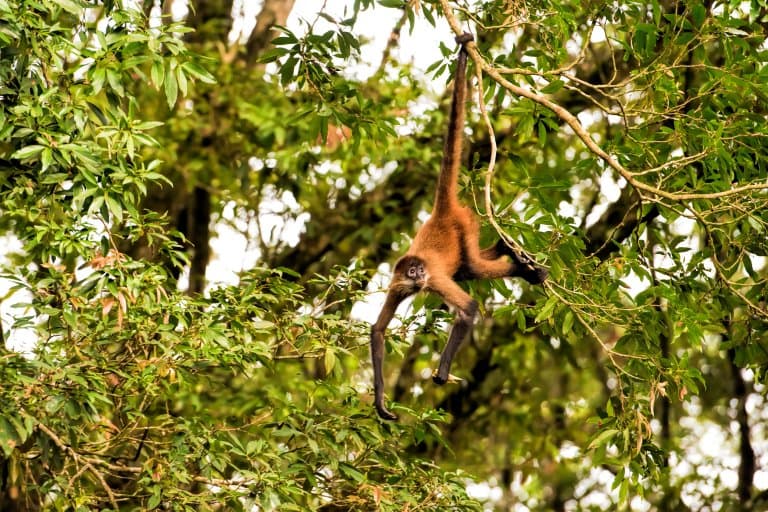 Spider monkeys live in social groups of up to 35 individuals high in the canopy of rainforests, where they forage for food. They diet on fresh fruit and nuts, but will also eat leaves, insects, bird eggs, honey and occasionally flowers.

They have disproportionately long, spindly limbs which inspired its name, and when they walk on the ground their arms will almost drag on it! They are extremely agile and able to jump between trees.

Species range in size, and color. The largest is the black-headed spider monkey with an average weight of 11 kilograms (24 lb) and grows up to 60cm (2-feet) in length excluding tail.

1. They are some of the largest new world monkeys

Spider monkeys are big! While perhaps not as bulky as the baboons and mandrills, for an animal this elegant and nimble, they are very impressive.

Of the new world monkeys, the Atelidae family contains the largest members, such as the howler, the woolly, and the spider monkeys. 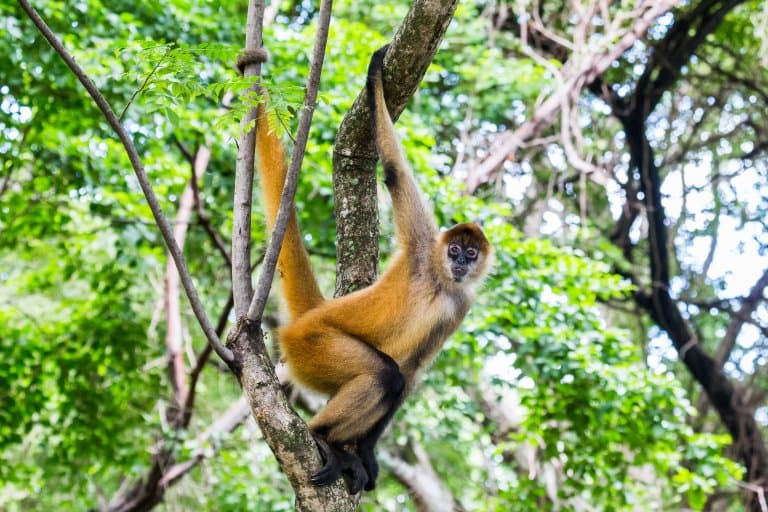 Spider monkeys can grow up to 2-feet in size, or 3 feet including their tail.

2. They have prehensile tails

The spider monkeys’ tails are incredibly nimble, able to curl around branches and grip them, like a fifth hand.

The end of the tail is sensitive, with reduced fur, and incredibly strong. Unusual among monkeys, this tail can support the weight of the animal as it dangles, foraging for food.

The stereotypical monkey, swinging from branch to branch and coiling its tail around tree limbs to hang from is, on average, inaccurate. No old world monkeys and only a few new world monkeys can use their tail in this fashion, and most don’t swing like gibbons through the trees,

So, when you see these clichés in cartoons, you can be relatively certain that it’s unrealistic. Unless you’re dealing with a spider monkey. As we mentioned, their tails are phenomenal, but another unusual thing is their mode of locomotion.

Swinging through the branches as a means of transport is called brachiation and aside from looking really cool, it’s a very energy-efficient means of getting from one place to another. At least, when you live in the forest.

Spider monkeys have crazy long limbs for this, and make it look totally effortless. And, if you look for long enough, you can be persuaded that they quite enjoy it, too. Of course, the true masters of this act are the gibbons, who do it without even looking, but spider monkeys come a close second.

They lack opposable thumbs on their hands like most other primates, which is another special adaptation.

This gives them more of an unusual hooklike hand with four long, slender fingers – which all aid them swinging in trees!

These are very large monkeys, with relatively large brains for their size, too. When their problem-solving and other cognitive strengths were tested by researchers, they scored particularly highly, trailing behind only two of the most intelligent apes – the chimps and orang-utans – in terms of their number of mistakes, and doing better than all other monkey species.

In individual tests, they came second only to chimps, and when tested against only other monkeys, they came out first in every cognitive trial. This may mean they’re the most intelligent monkey up there! 1 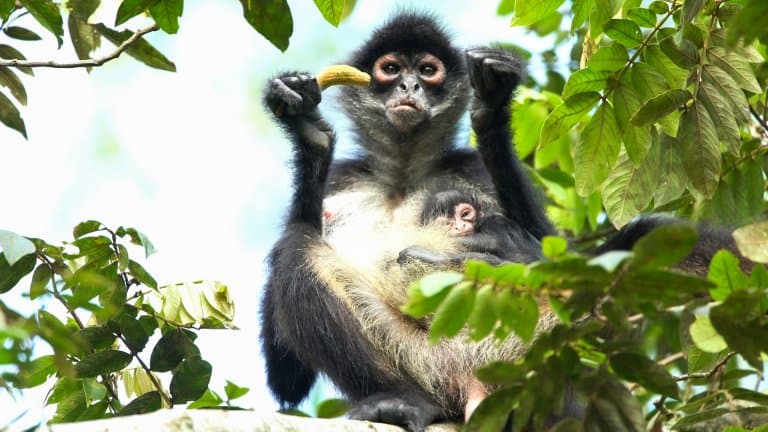 That’s a phrase you probably don’t hear every day. Unless you’re a spider monkey behaviourist, and you’re trying to identify the sex of your subject.

Similar to hyenas, female spider monkeys have highly modified clitorises that can very easily be mistaken for a penis. In the spider monkey, this is used to store and distribute urine for scent marking, which means that researchers need to identify a scrotum in order to accurately sex a monkey in the field.

Male spider monkeys also use this clitoris as a scratch-and-sniff cue for a female’s receptiveness; touching it, and then smelling their fingers to get a sense of whether she’s ready to mate.

7. They can defend themselves with projectiles

When an intruder is sensed, spider monkeys have a number of defences. First of all, they can snap off and release some seriously heavy branches, aimed at the foe from above. If this doesn’t work, they do the most monkey thing: they pee and defecate towards the threat.

Sometimes these branches weigh upwards of 4kg, and when dropped from a height create a significant danger to anyone looking up, including researchers. 2

Spider monkeys can produce a wide array of vocalizations, one of which is a ‘bark’ when they feel threatened. When humans approach, they will bark from their treetops.

They will also shake tree branches to scare threats away.

9. They come down from the trees sometimes. To eat soil.

This doesn’t sound like the behaviour of the smartest monkey up there, does it? But while spider monkeys are famous for the acrobatics in the upper reaches of the forest, their lesser-known excursions include a trip to terra firma, where they’ve been spotted munching on dirt.

This probably isn’t as dumb as it sounds, as many animals supplement their mineral requirements by licking salt and eating the earth. It’s fun to think that these individuals are just a bit special, though. 3 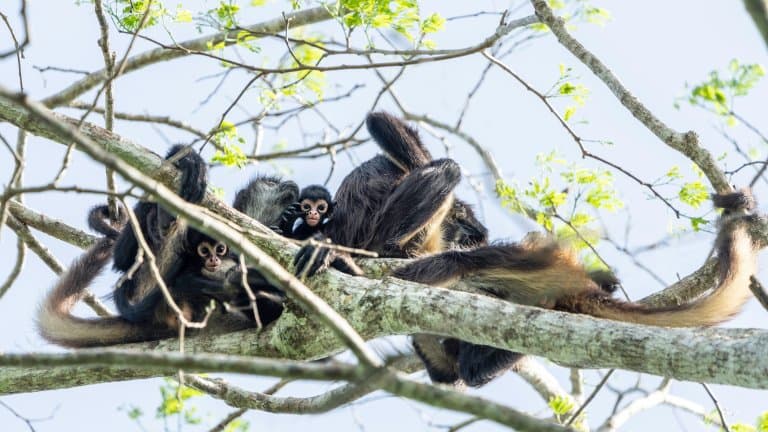 10.  Some species are the most endangered primates on Earth

Sadly, there are a number of endangered spider monkey species. The brown spider monkey, Ateles, hybridus is listed as critically endangered, with its population in steady decline. Hunting and trapping contribute to this, but one of the major factors affecting rainforest animals of all kinds is logging.

Trees in forests globally are cut down for wood, but many are also cut down to grow cheap animal food to supply our demand for meat, often in distant, Western nations.

Colombia, like many countries, commonly cuts down its trees for these purposes, which devastates the habitats of countless unique animals like the spider monkey. 4