Not all slugs are found in the garden. Some can swim, come in multiple colours, and concentrate toxic chemicals in their skin.

In the tropical reefs around the world there’s a branch of these slugs, many of whom are agile predators, feeding on sponges and attaching strange egg roses on rocks.

One such species is a particularly red and wriggly individual whose movement has inspired its name: the Spanish Dancer. They are a large colourful sea slug. 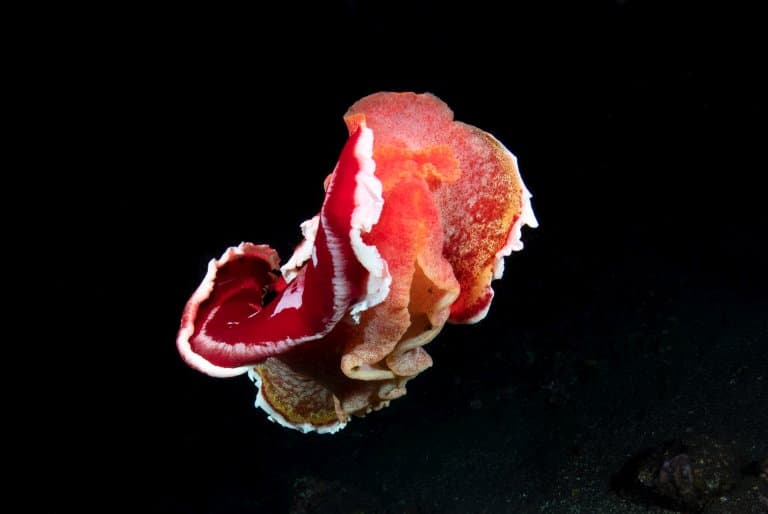 They are widespread the tropical and sub tropical waters of the Indo-Pacific, where it lives near to rocky shelters and coral reefs up to 50m deep.

It hides away at night, and comes out at dark to diet upon a variety of different sea sponges.

Spanish dancers are divisive in the world of sea slugs. Their appearance ranges from a beautiful blood-red to the colour of frozen pork.

Some have spots or other markings, and some have frilly mantles that can look like anything from the dress of a flamenco dancer, to the sole of a badly-worn foot.

Whether their appearance dazzles or disgusts you, there’s no question that these are strange and interesting animals, from a stunning lineage of externally-gilled gastropods.

Let’s take a look at some of the things that make Spanish Dancers so cool.

It shouldn’t take a dirty mind to recognise at least part of this word. Nudibranchs, or “naked gills” are an order of gastropod that lives on the sea floor, all over the world. While commonly known as sea slugs, they’re typically far more dazzling and can come in a spectacular array of shapes, sizes and colours.

Unfortunately for some Spanish dancers, many got the short end of the stick in the looks department, instead resembling a chunk of partially digested raw meat. This might explain why it only comes out at night.

However, this isn’t an entirely fair generalisation; many individuals are a vibrant red or orange and, like some of their other nudibranch cousins, carry a lot more charisma than you’d expect from a slug. 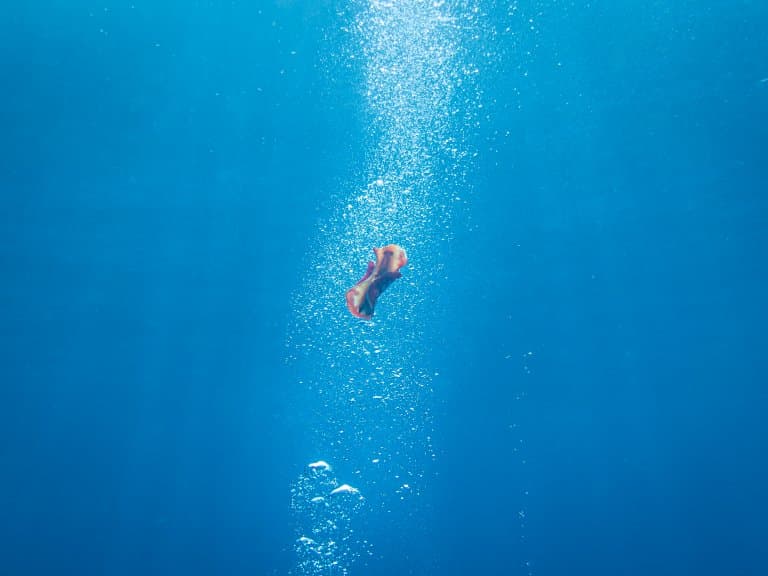 2. Even their movement is kinda gross

When slugging around on the bottom of the sea, the Spanish dancer curls up its edges, or mantle into what’s appealingly termed a “peripheral blister”. This certainly doesn’t help its aesthetic, but it does function to keep the mantle out of the way while it moves.

When threatened, or in need of a new location this mantle serves a very important purpose.

When the Spanish dancer needs to get about in a hurry, it swims. But since it has no bones, and not really any fins to speak of, it has limited options when it comes to locomotion.

This unique style of swimming, which gives the slug its name, involves pitching of its body, combined with rhythmic undulating of its mantle, resulting in a meaty acceleration, and propulsion of up to 1.3 body lengths per squirm.

Again, there’s a variation in the opinion of how appealing this is, depending on the preference of the observer. 1

While, in so many cases, common names don’t match reality (ladybird), in this case, the name ‘sea slug’ is pretty spot on. Nudibranchs are gastropods, just like your run-of-the-mill garden slugs and snails; they’re just a lot bigger and faster-moving!

And these really are large slugs! Spanish dancers are one of the larger of the nudibranchs, reaching lengths of up to 90cm! Though this is very rare, and they’re typically around 30cm (1ft) long.

5. They have their gills on the outside

The genus name Hexibranchus means six-gilled. As a nudibranch, the Spanish dancer has six naked gills, meaning it has six gills that sit outside of its body.

If this thing wasn’t already freaky enough, its breathing apparatus is on the outside, and to top it off, its species name sanguineus essentially means ‘bloody’; referring to its red colouration.

So, this is a six-naked-gilled, bloody slug. Lovely.

This means Spanish dancers have both female and male reproductive organs.

Unfortunately, they don’t have the ability to self-fertilise, so they do still need to mate with another individual to reproduce.

Mating is a head-to-toe affair, after which both parties can become fertilised. After some days, they will be ready to lay their peculiar eggs. 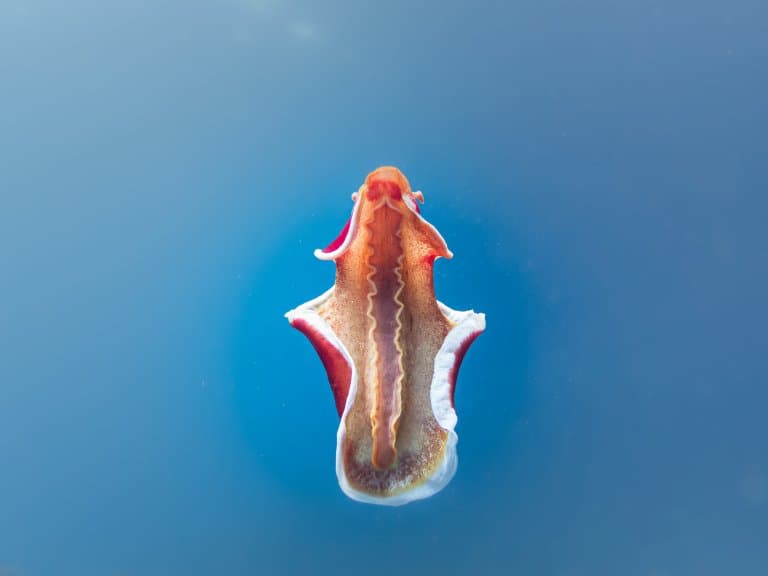 When a Spanish dancer lays its eggs, it forms special red ‘egg ribbons’, around 70cm (27in) long, coiled into pretty little roses, which it attaches to rocks. These ribbons contain around 1.5 million eggs each, which all hatch at around the same time and emerge as larvae.

These ribbons are just as conspicuous as the slug itself, so need to rely on a very different type of defence to protect them. 2

Being a bright red, naked-gilled, bloody hermaphrodite with no bones isn’t the best way to blend into your surroundings, so Spanish dancers have to defend themselves in other ways.

If looking at one wasn’t enough to put you off eating it, you may be interested to know that it has some disgusting chemical defences too.

This sea slug eats a particular kind of sea sponge, from which it derives a potent, distasteful chemical that puts off predators. This chemical also imbibes its eggs, which are otherwise very obvious.
3 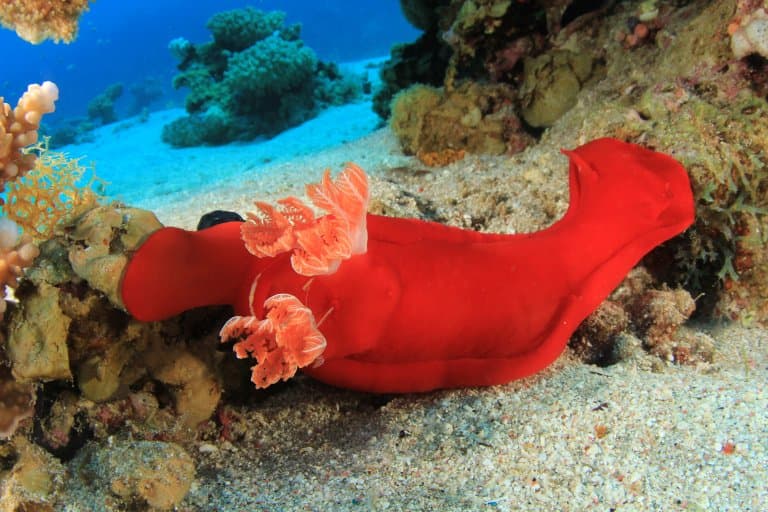 Spanish dancers have an unusual alliance with the shrimp, Periclimenes imperator, or emperor shrimp. The relationship these two organisms form is a type of mutualism, in which both derive some benefit.

The shrimp sits on the sea slug, picking off dirt and parasites, and in turn, it receives the relative security of an enormous, toxic gastropod as its bodyguard.