In amongst the bushy forests of Cuba, there’s a hedgehog-sized mammal with a big bite called the Solenodon.

It’s actually a cousin of the hedgehog but this little creature doesn’t have spines, instead, it inflicts pain from specialized teeth that pack a surprising punch.

Solenodons are shrew-like creatures with tiny eyes and long heads. They have elongated, cartilaginous noses and sort of resemble a shaved hedgehog, particularly in their size.

They’re one of the few venomous mammals remaining (though it’s thought that venom was much more common in ancient mammals).

There are two species, Atopogale cubana, an endangered species from Cuba, and Solenodon paradoxus, a less concerning species from Haiti and the Dominican Republic.

Both of which are a very ancient and primitive form of mammal – living fossils! They are nocturnal and diet on small insects and lizards, but they’re also quite keen on fruits and veggies. There’s also some evidence that they’re remarkable swimmers.

Sadly, there are two extinct species from the Solenodon genus, the Giant solenodon and Marcano’s solenodon which are both thought to have occured in the last 500 years.

Solenodons are one of the few remaining mammals that can carry and inject venom.

The venom itself is interesting too, as it seems to have evolved in parallel with the venom in vipers.

So, all land vertebrates have a common fishy ancestor. From this ancestor, they inherited certain genes, and over time they mutated certain others, giving rise to all the diversity of their lineage.

This means that a shrew-like mammal, though vastly different from a snake, still has quite a lot in common with one, genetically.

One of these commonalities is a gene that codes for certain proteins in saliva. And certain descendants of this fish developed similar adaptations to this gene over time, because their lives faced similar challenges.

In vipers and solenodons, these challenges are probably related to being small hunters, at risk of being damaged by their prey. As more and more solenodons were killed by dangerous prey, those with mutations that made the saliva proteins more toxic prevailed more often, passing on this mutation to their offspring.

This is the origin of venom in tetrapods and is why solenodons and vipers seem to have some similarities in the origins of their venom. 1

Solenodons have glands in their armpits and groin regions that release a musky, goat-like odour.

They don’t seem to use it much for marking – although this isn’t always obvious – so it might simply be a way of deterring predators.

4. Solenodons have nipples on their butts

This is really weird. Female solenodons have nipples more or less on their buttocks.

They’re obviously used for feeding her young, of which there are usually one or two, but she also uses them to carry them around. Baby solenodons hold onto these elongated butt nipples for guidance.

The solenodon is capable of producing high-pitched ‘clicks’ that it uses to bounce sound around the environment to create an audible map of the area.

It’s the same strategy that bats and toothed whales use to look around them and is probably an adaptation to living in caves and burrows, where there isn’t much light. They also have tiny eyes and poor vision in general. 2

5. Solenodon have a nasty temper

When threatened they have a tendency to go a bit mental and can give a nasty bite to a large animal, as well as do significant damage with their powerful digging claws.

When disturbed, they jump about in what’s termed as a ‘quadrupedal ricochet’, meaning bouncing off forelimbs and rear limbs alternately. Their excited and unpredictable defence mechanism might have something to do with fights between solenodons, which can often end in death.

Solenodons have a bit of a funny gait, and locals claim that they never run in a straight line.

This may be a predatory defence, or it could have foraging implications.

7. They have unusually flexible snouts

This is due to having a ball-and-socket joint at the base of their snout, similar to a human shoulder joint.

This increases flexibility when rooting in the ground sniffing out insects, worms or roots.

Since venom is modified saliva, it makes sense to have modified teeth to dispense it with. In most modern snakes, these teeth have evolved into hollow fangs that work like a hypodermic needle to inject venom from modified saliva glands called venom sacs.

In much more ancient times, snakes had simpler teeth with just a groove in them that channelled the venom into the tissues of their prey (or enemies). This is exactly what solenodons do, and the first incisor of their bottom jaw (the mandible) is grooved just like the old snakes. 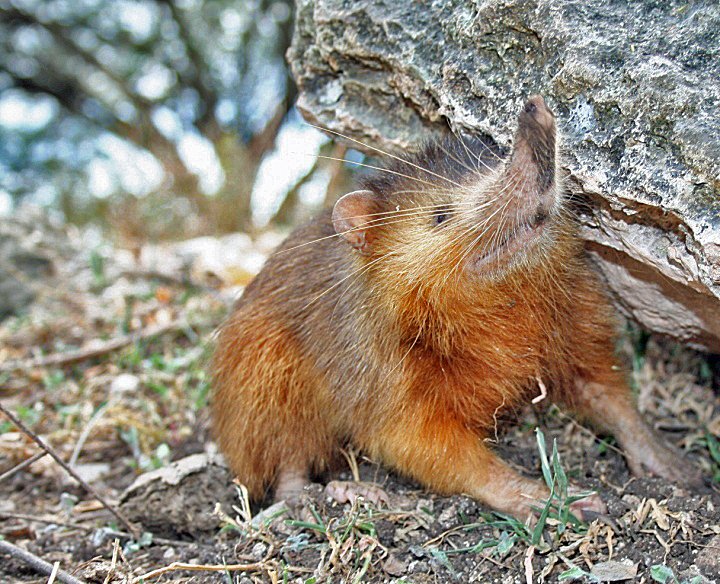 9. They clean themselves with their feet

In many mammals, the forelimbs are used in the familiar face washing and grooming routine of rodents and cats. Solenodons don’t really do this.

Instead, they scratch their entire bodies with their rear limbs. This probably wouldn’t work for you and me, but solenodons have very flexible hips, so they’re able to cover almost their entire body this way.

Interestingly, since they don’t lick themselves or groom with their front paws, they’ve evolved a barer bum than other mammals, presumably as a way of keeping it clean.

10. They may have swum to Cuba

In most cases, island-based mammals got stuck there during periods when the water levels rose and trapped them. They then went about evolving separately from their original populations, which is why island lifeforms are often so unique and unusual.

On occasion, mammals will make their way into the sea and start paddling. Of course, this is a risky business, and almost certainly, most of them will get lost and die. But from studying fossils, geology, and DNA sequencing of the two species of Solenodon, it appears that the Cuban species diverged too recently for land-crossings, and must therefore have crossed the water from Haiti.

So, either a tropical storm or a strong set of paddling limbs somehow resulted in a viable population in Cuba. 3

11. Both species of Solenodon are threatened by invasive species.

Cats, mongooses and other predators were brought over to deal with rats, and they’ve had a large impact on solenodon populations too. Whenever an animal is introduced to a new habitat, there’s a chance it’ll do this. It’s why biocontrol is so important on most islands now (think of Australia and New Zealand!).

For the poor Solenodon, they may well go extinct because of it. This would be a shame, because these animals really are ancient, and represent a style of mammal that existed in the dinosaur times.

In fact, the Solenodon is estimated to have diverged from its ancestors around 73 million years ago, which means it coexisted with T-Rex AND survived the evolution of all modern mammals following the extinction of the dinosaurs!