Regarded as one of the cutest animals on the planet, the slow loris is also one of the most surprising – they are the only venomous primate in the world.

They are  small ‘lemur-like’ primates with large eyes, that live in trees in the rainforests of Southeast Asia. Their name is from their slow, subtle movements in trees to avoid predators. 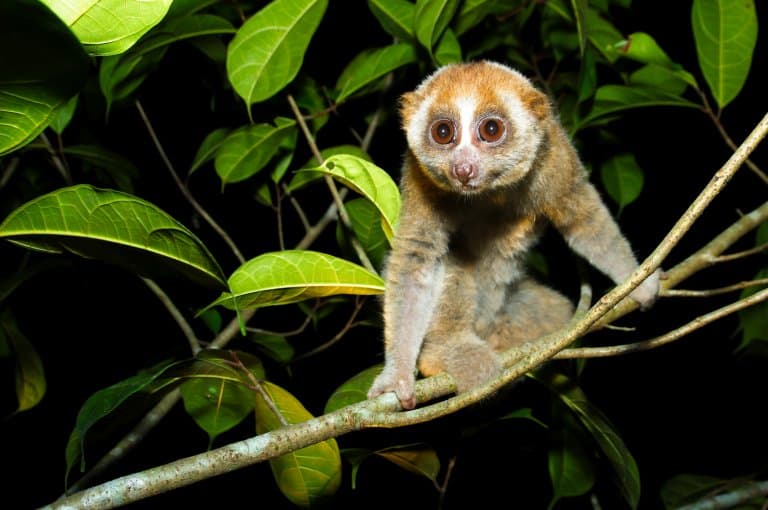 They’re omnivorous, which means they eat fruit and gums as well as insects, eggs, small birds and reptiles, although they have a preference for fruit.

While not much is known about slow lorises social structure, it’s thought they are actually quite similar to human parents. They give birth each year and a half to one or two youngsters, which are simply known as baby slow lorises.

It can take an estimated six months for them to give birth, with a gestational period of around 190 days. For the first weeks of life, babies will cling to their mothers. Eventually, however, she’ll find safe places to live her offspring, while she forages for food.

Sadly, their numbers are in decline and the illegal pet trade and deforestation have left slow lorises as either vulnerable or endangered.

1. The slow loris has a bite that is toxic

Despite being one of the cutest animals around, the slow loris is also known as one of the most dangerous. This is because they pack a venomous bite!

Slow lorises are one of the only venomous mammals in the entire world. Unlike snakes, who use their venom to hunt or protect themselves from predators, slow lorises actually mostly use their venom against one another. They’re extremely territorial, and their painful bite helps protect what’s theirs.

Believe it or not though, their venom isn’t produced in their mouth. Instead, they have a special organ in their arms that they lick. This produces a toxin similar to a cat allergen. However, it’s strong enough to cause flesh to decay!

Slow Loris bites can cause painful swelling, and there’s only been a single recorded human death from a bite which is believed to be due to anaphylactic shock (an allergic reaction to the bite).

Lady Gaga was even bit by a slow loris during an attempted video shoot, once again reminding the public that, although these small primates are incredibly cute, they’re still wild animals at heart. 1 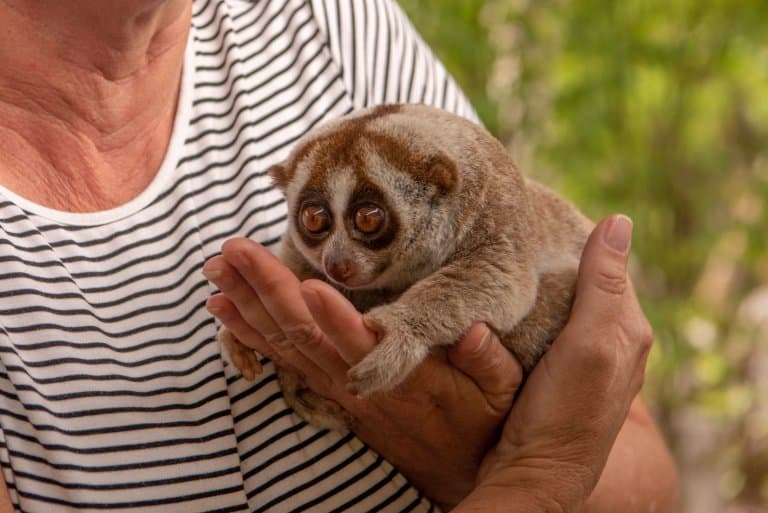 2. They are abused in the pet trade

Because they look so cute, many people think slow lorises will make great pets. As a result, they’re one of the number one victims of the illegal pet trade.

Not only are they taken from their home and illegally displaced around the world, but they’re harmed in the process. Their venomous and painful bites result in them having their teeth pulled, and they often don’t receive the specialized care they require. 2

3. There are few documented predators of the slow loris

Remember how we mentioned above that the slow loris rarely uses its venom to protect itself from predators? This is because they don’t have a lot of predators!

While there are several predators that scientists think may prey upon slow lorises, only a small number have been observed – these are eagle hawks, pythons, monitor lizards, and orangutans.

However, their max speed is still less than 2 kilometers per hour.

5. They have two tongues

The slow loris has two different types of tongues, each one with a different purpose!

One of their tongues is designed to help them drink the nectar from fruits, like the fruit bat’s tongue.

The other is rougher and is used as a toothbrush to help keep their teeth clean. Because they eat a lot of fruit, they consume a large amount of natural sugar.

This cleaning tongue helps ward off diseases that would make it difficult to eat or protect themselves, like tooth decay. 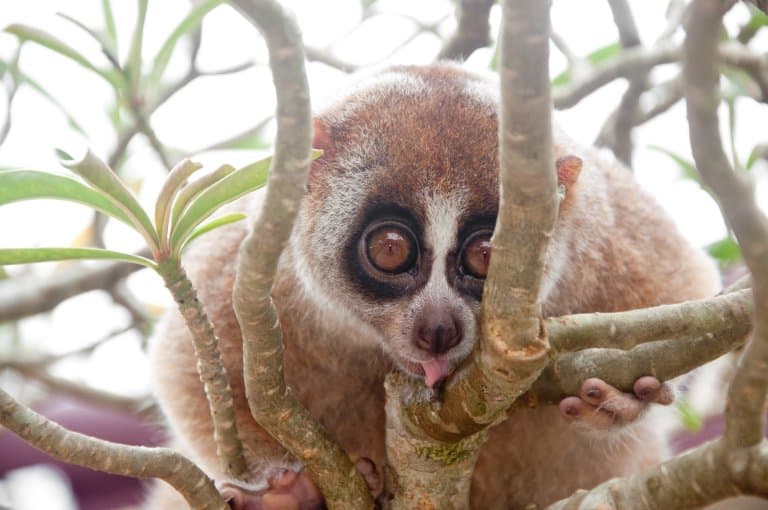 6. They only see in one color

Slow lorises lack the developed eyes humans and other mammals have. As a result, they can only see in one color.

However, because they’re nocturnal, this doesn’t harm their ability to survive. Instead, it provides them the right amount of contrast to flourish in dark conditions.

7. They’re considered to be shy

The slow loris has earned itself quite the reputation in Southeast Asia. In Indonesia, people tend to call these unique primates malu malu or “shy one”. This is because slow lorises will freeze and cover their faces with their hands when startled!

By standing completely still and hiding their eyes, which are reflective, slow lorises can completely camouflage themselves when spotted by a predator. 3

8. They do have tails

But they are short and stubby, and hidden from sight beneath their dense fur. 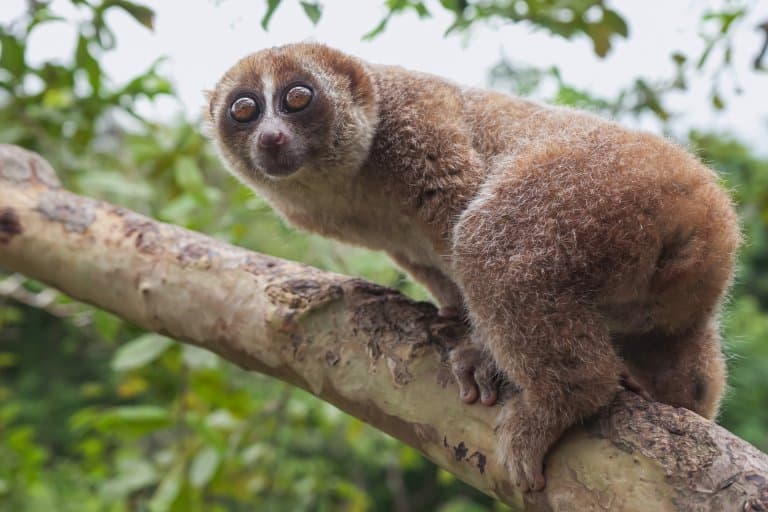 When it’s cold and fewer food sources are available, pygmy slow lorises can go into ‘torpor’, where their metabolism and body temperature is reduced, which can last for a few days.

This helps save energy – and is an excellent survivial strategy.

10. Some cultures believe they have supernatural powers

Many strange powers are attributed to the slow loris in various native tribes and tradtions. Sometimes they are used in traditional asian medicine.

They are thought to be able to ward off evil spirits, cure broken bones and loris meat is seen as an aphrodisiac that improves “male power” in some regions.

In North Sumatra, they are thought to bring good luck if buried under your house! These deep-rooted beliefs have contributed to their declining population.

11. They’re some of the rarest primates

The slow loris is one of the top 25 most endangered animals due to deforestation and the animal trade. Their small communities, nocturnal behavior, and habitats also make them difficult to spot on an average day.