The secretarybird or secretary bird (Sagittarius serpentarius) is an African, primarily terrestrial, bird of prey. It is related to birds like vultures, hawks, and harriers.

It has a distinctive appearance, as it has the body of an eagle, but the legs of a crane. These long legs make it tall, sometimes up to 1.3m. 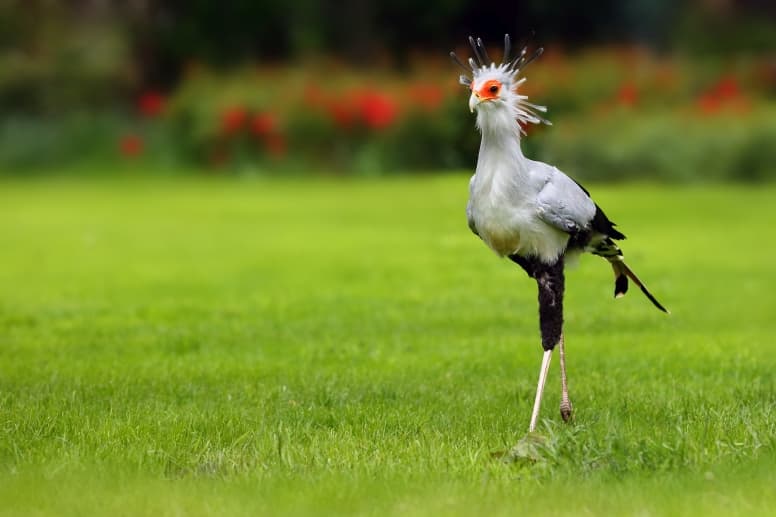 Its preferred habitat is open savannas or grasslands in sub-Saharan areas. It hunts in these open areas, using its long legs to strike prey and stomp them to death. It is famous for eating snakes, but it also hunts insects and small mammals.

They mate for life and one pair inhabits and defends a territory of up to 50km. Pairs lay eggs in a nest of their own making at the top of Acacia trees.

They live 10-15 years in the wild and up to 19 in captivity. They are classed as endangered, with their numbers rapidly decreasing due to habitat loss.

1. No one is quite sure where it got its name.

There are a few different theories, including that it was named by Dutch Settlers because of its resemblance to 19th Century Lawyers’ Secretaries. Another theory suggests that the name is a corruption of an originally Arabic word, meaning “hunter bird”. 1

2. Its scientific name means “the archer of snakes”.

This is because secretary birds love to hunt snakes. They use their large wingspan to distract the snake, while their scaley legs prevent snake bites. 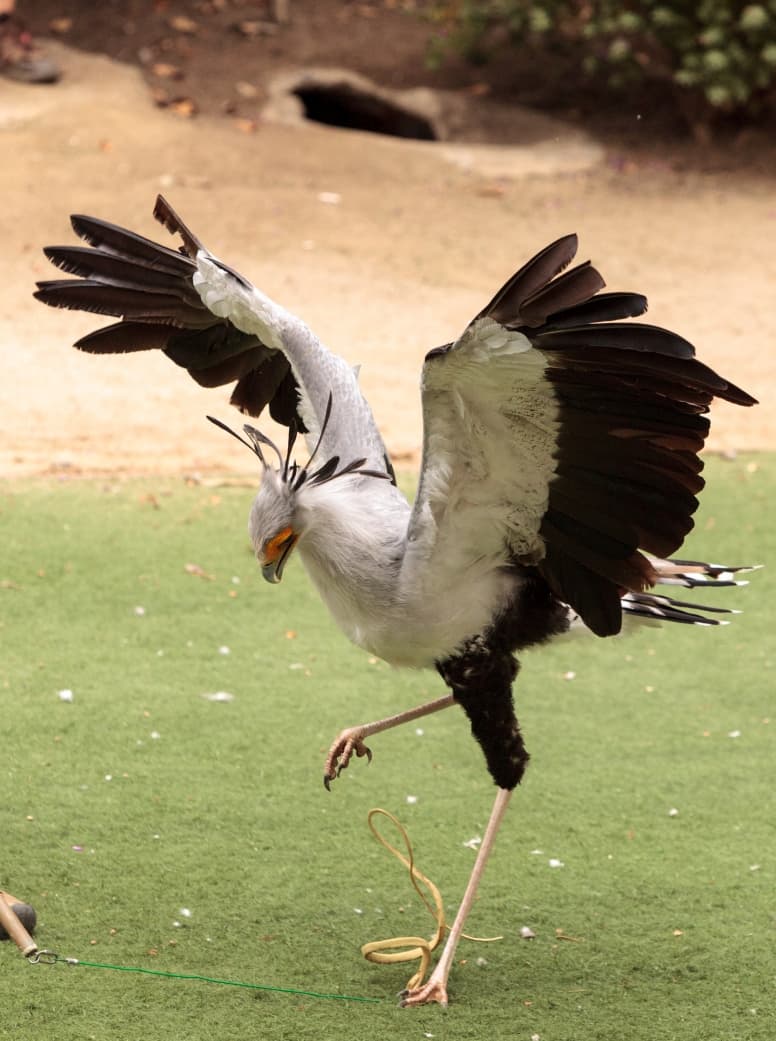 They move around on foot most of the time, only taking to the air to reach their nests or for courtship displays.

This is huge! They use their wings while hunting to distract their prey, and also during mating rituals. 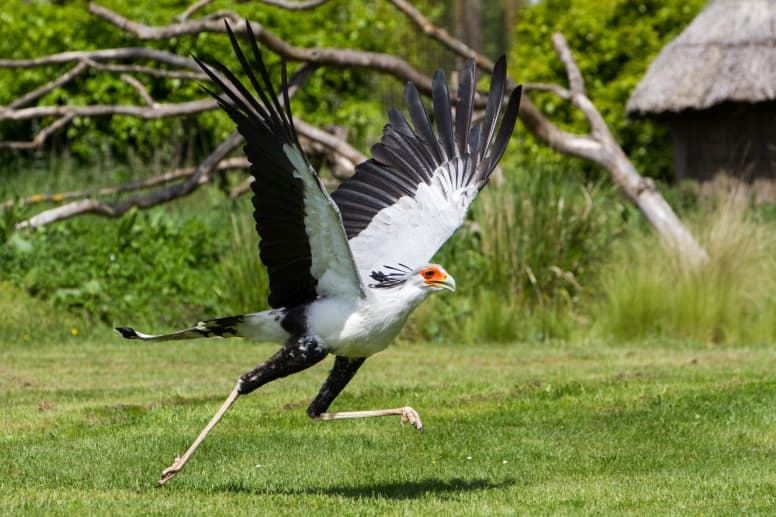 5. They are one of just two birds of prey that hunt on the ground.

The only other birds that hunt on the ground are caracaras.

6. Secretary birds have one of the strongest (and fastest) kicks in the animal kingdom.

They can kick with a force 5-6 times their body weight. It happens fast too, in 15 milliseconds the foot can go from still to making contact. 2

7. They have been seen hunting juvenile big cat.

Monogamous pairs, and sometimes familiar groups, will hunt together.

Once paired up, they will stay together for life. They even use the same nest year after year.

10. They have elaborate mating display.

Even though they mate for life, they still perform their elaborate mating displays. They will perform “pendulum flights”, swooping up and down again. And on the ground, they dance together.

Pairs of secretary birds will inhabit, and defend, areas of up to 50 km2. However, many can be spotted together around important resources, such as watering holes.

12. They make their nests on the top of thorny trees.

This is almost always in an acacia tree. The nests are large, platform-like and often softened with grass and dung. 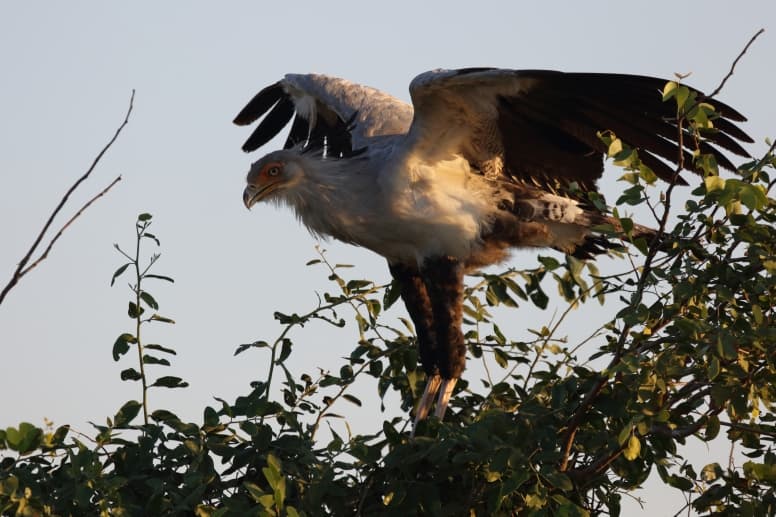 These eggs are a few inches long and hatch after 45 days of incubation.

14. Sadly, the secretary bird is endangered.

This is because their grassland habitats are cleared and used for cattle. 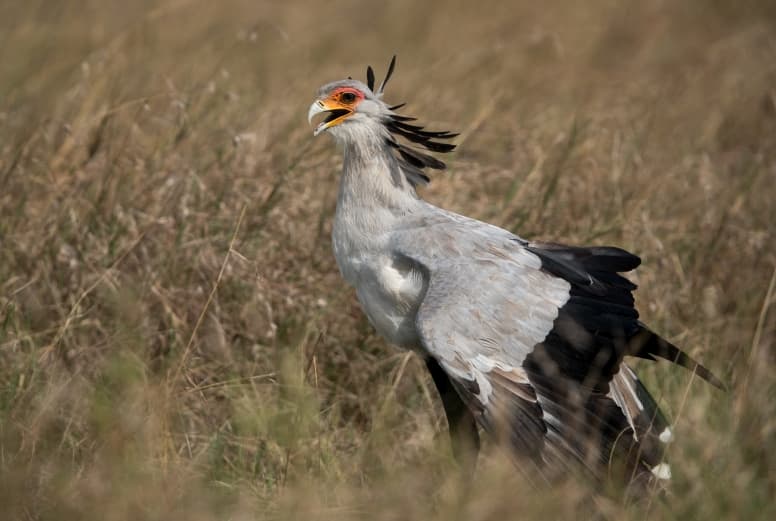