Sawfish are ancient, mysterious and highly endangered family of rays with a long, narrow nose which has sharp ‘teeth’ each side like a saw.

They are found in tropical and sub tropical seas and freshwater lakes and rivers around the world, with larger populations in Northern Australia, and Florida, in the USA.

Known to humanity for thousands of years, they are honoured, admired, feared and- sadly- desired; despite stringent efforts to protect them, poaching remains an unrelenting threat to their existence. 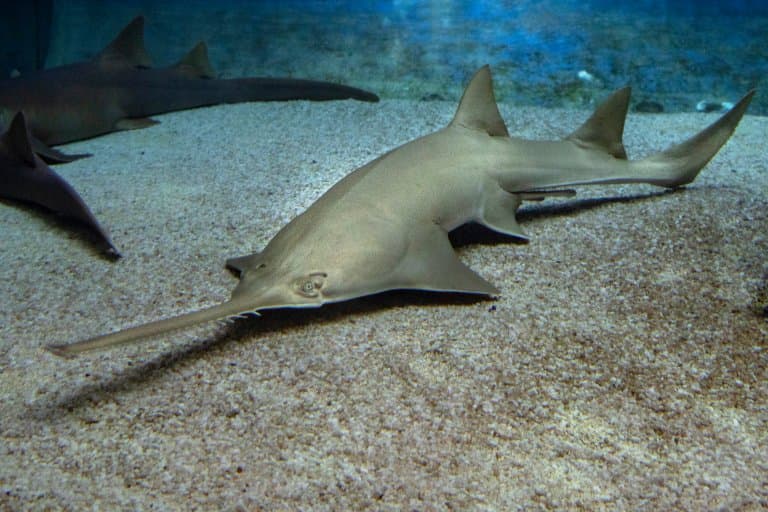 Sawfish are cartilaginous fish that belong to the order Rhinopristiformes, a group of rays containing families that amusingly appear to have been named according to items found in a luthier’s workshop.

They share their order with guitarfishes, wedgefishes and banjo rays, all of which are benthic, marine predators with flattened bodies. They are sometimes known as carpenter sharks.

Bizarrely, the sawfish is equipped with a greatly elongated rostrum studded with a lethal set of outwards-facing ‘teeth’.

Sawfish are generally found in shallow waters below 10m in depth, and like to diet on fish, crustaceans and molluscs.

They are also among the largest of fish species, reaching at least 7 and half metres long.

Their strange shape, enormous size and preference for shallow, inshore waters has, somewhat unsurprisingly, garnered the curiosity and admiration of humans for thousands of years.

Sadly the 5 species of sawfish are classified as either critically endangered or endangered due to being hunted for their fins, teeth or saw, as well as habitat destruction.

They are protected by law in both Australia and the USA, which means it’s illegal to catch, collect, buy or sell any part of a sawfish with heavy fines for those that break the rules.

1. Sawfish are equipped with a versatile weapon

The famous rostrum of the sawfish is primarily used to incapacitate and capture prey.

It can be swept sideways like a sword to injure or kill, and is also used to pin unfortunate fish to the sea floor so they can be eaten head-first, a feeding strategy thought to disable any defensive spines their quarry might possess. 2 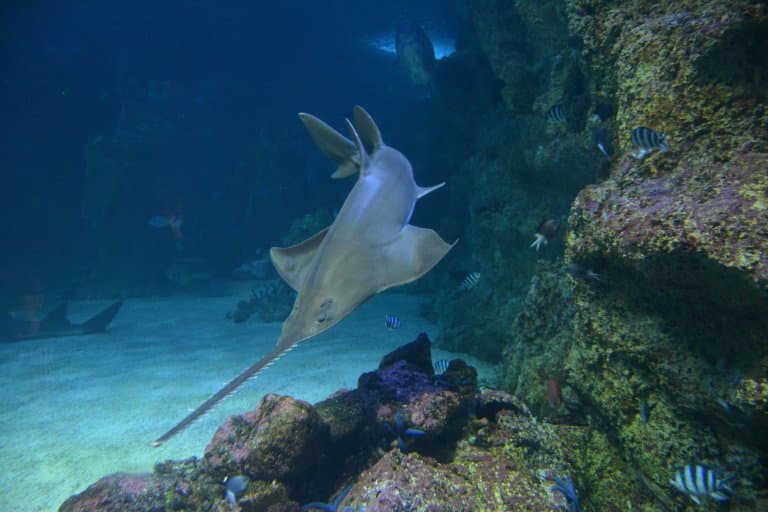 2. Their ‘saw’ contains between 14-37 denticles on each side

The sharp ‘teeth’ are not actually teeth in a traditional sense, and are called denticles – which are highly specialized scales.

It’s common for the denticle count to be different on each side, and if they lose a one, it does not grow back again. 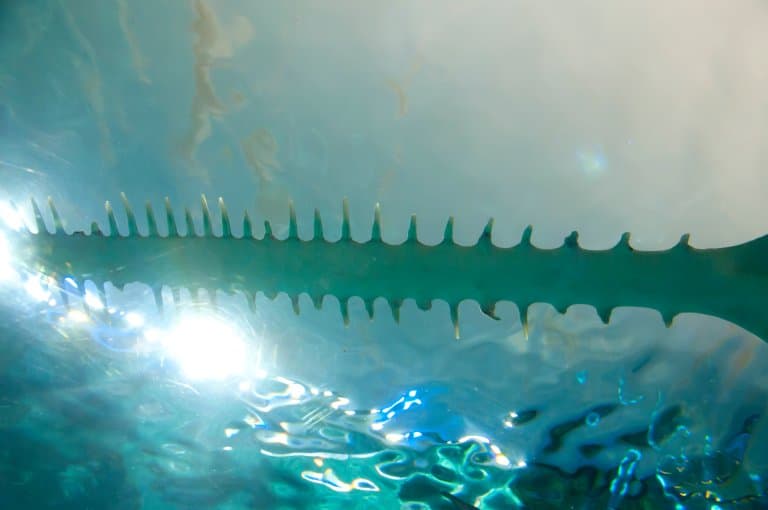 3. The rostrum is a multi-purpose survival tool

Packed into the rostrum of every sawfish are thousands of tiny organs called electroreceptors, which are able to pick up the tiny electrical currents produced by living organisms.

Using this sixth sense to help them acquire their target from up to 40 centimetres away, sawfish swipe their lethal saw through the water to strike their prey with deadly accuracy.

4. When danger threatens, sawfish aren’t afraid to fight back

Sawfish have been observed in the wild using their rostrums to fend off large predators.

The teeth lining the sides of the rostrum are extremely sharp, and although sawfish are placid towards divers, people are regularly injured while attempting to catch them for profit. 3

5. Sawfish are rays, not sharks- but sawsharks exist too!

Both sawfish (order Rhinopristiformes) and sawsharks (order Pristiophoriformes) are equipped with remarkably similar toothed rostrums, and use them to locate and capture prey in very similar ways.

At first glance, sawfish and sawsharks appear to be closely related, but in reality they are distant cousins and only share a taxonomic Class. 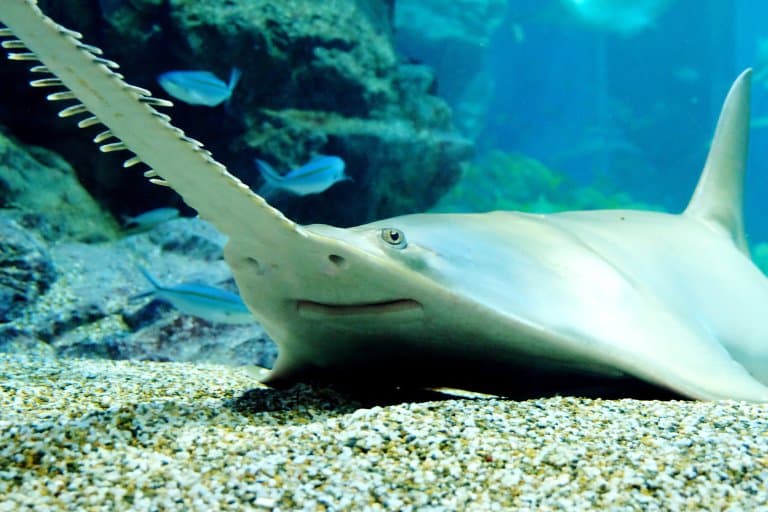 6. They give birth to live young

Like many chondrichthyan species, sawfish eggs develop and hatch inside the body of their mother, resulting in live birth.

This reproductive strategy is called ovoviviparity, and allows sawfish to avoid leaving their developing eggs in the open where they are at risk of predation.

7. Unlike most marine fish, sawfish can adapt to varying levels of salinity

Sawfish are capable of travelling freely between oceanic, estuarine and freshwater habitats.

Some sawfish species have more affinity towards fresh water than others- the largetooth sawfish spends a great deal of time in lakes and rivers, and even gives birth there. 4

8. Sawfish can clone themselves

Occasionally, in the absence of any male individuals, female smalltooth sawfish give birth to male offspring that are genetically identical to themselves; these cloned individuals are thought to account for around 3% of the population.

This process is known as facultative parthenogenesis, and is thought to be a survival tactic that allows isolated females to establish new populations. 5

The shape of their rostrum, as well as the behaviour of sweeping it sideways defensively or while hunting, puts sawfish at extreme risk of entanglement in fishing nets.

Of particular danger are passive nets that are left unattended, and also old, discarded ‘ghost’ nets. 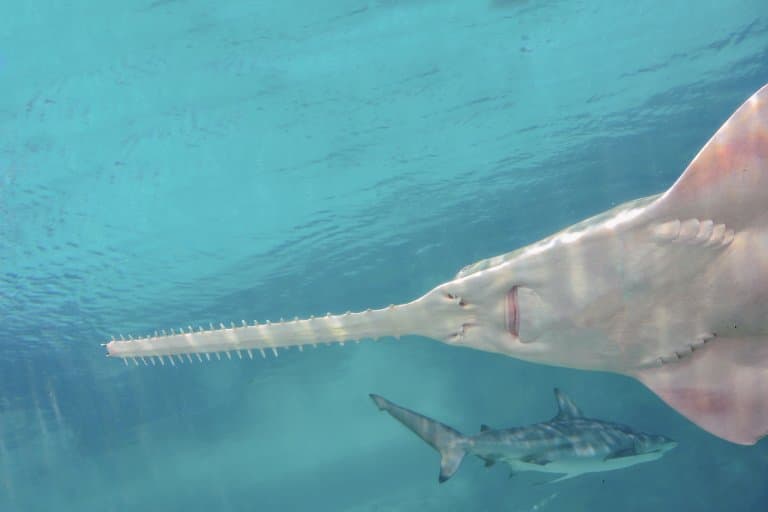 10. Their value to humans makes them a target for poachers

Sawfish are one of the many chondrichthyan species relentlessly hunted for shark fin soup, and their rostrum is highly valued in traditional medicine.

This is a big problem for sawfish populations- their value increases as their numbers dwindle, causing a feedback loop that leads to even more poaching.

11. Sawfish have had strong cultural significance for thousands of years

Beliefs surrounding sawfish vary greatly throughout the world, but they are commonly regarded as symbols of strength, protection and natural balance.

European sailors feared the sawfish; they wrongly believed them to be highly dangerous and capable of sinking ships with their fearsome saws. 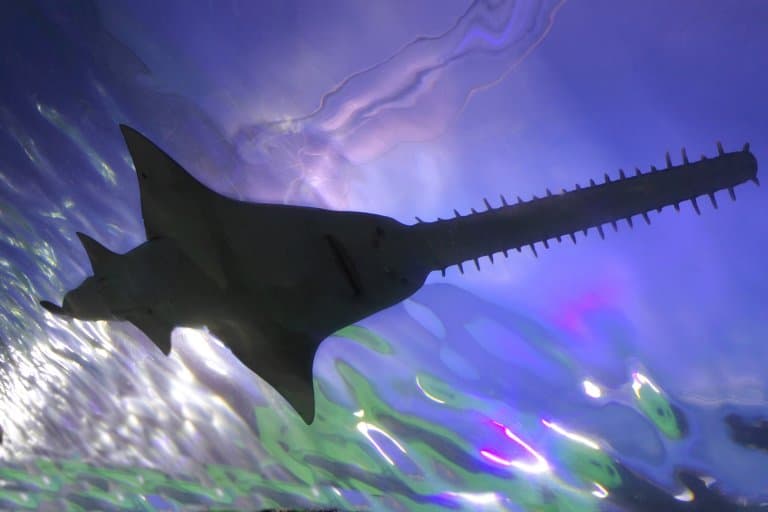