This gecko comes in various shades of red, brown, tan, and purple. However, they are most often a mottled brown color. Endemic to the island nation of Madagascar, satanic leaf-tailed geckos are found exclusively in the forest. 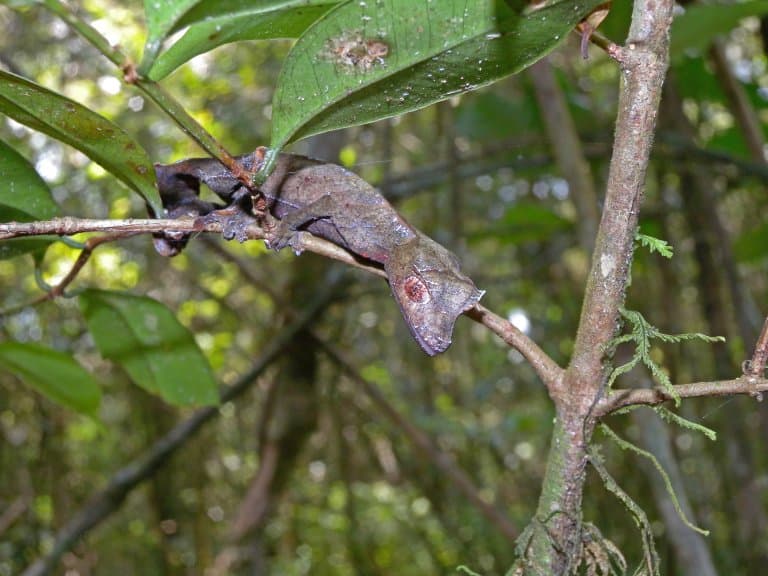 They are believed to in intolerant of many other environments, which means they rely heavily on a healthy forest to survive. Unfortunately, habitat destruction, deforestation, and collection for the pet trade have all become threats to the existence of this species.

Currently, there are three protected areas that these geckos can be found: Marojejy National Park, Tsaratanana Strict Nature Reserve, and Anjanaharibe Special Reserve. However, illegal harvesting is still a problem. While they are listed as Least Concern by the IUCN, they are also listed in the CITES appendix II, as a species that is at risk of becoming more threatened due to trade. 1

There are currently 14 species of Uroplatus recognized, all of which call Madagascar home. However, scientists are almost certain that there are more undiscovered species out there.

Unlike many other geckos, the satanic leaf-tailed gecko does not have a flat head. Instead, they have two eyelash-like horns that sit right above the eyes. These horns help the gecko blend into its surroundings and hunt for prey by assisting in camouflage.

They are nocturnal and insectivorous (meaning they diet on insects) and like to spend their time in trees and branches blending in.

Satanic leaf-tailed geckos are oviparous, meaning they are egg-laying creatures. Their breeding season starts at the beginning of the rainy season in Madagascar. Females will lay clutches of spherical eggs under leaves. After an incubation period of 60 to 70 days, hatchlings emerge from the eggs fully developed.

1. The satanic leaf-tailed gecko gets its name from its head shape & eyes

Though there are 14 species in this gecko’s genus, this one stands out because of its horned head and red eyes. Thus, leading scientists to give it the name satanic leaf-tailed gecko.

The mouth is also a bright orange color, adding to the effect of this tiny lizard. 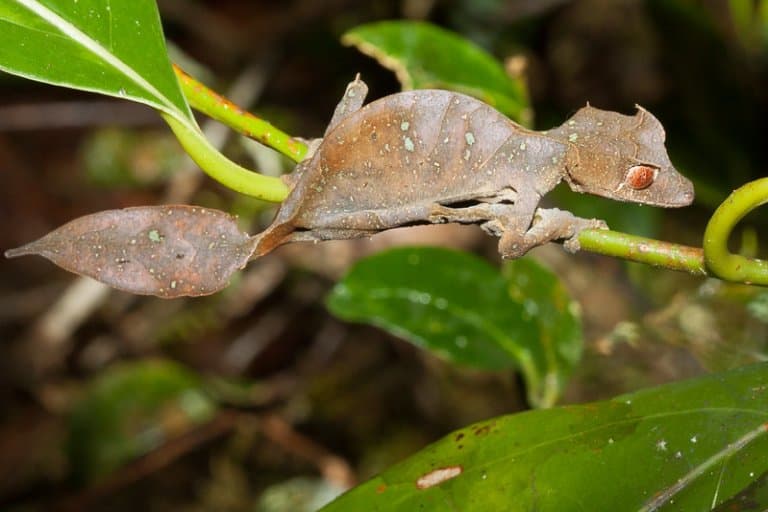 Satanic leaf-tailed geckos fall under the genus Uropiatus, which is derived from the combination of two Latin words that mean “tail” and “flat.”

The species name, phantasticus, is also derived from Latin, meaning “imaginary.” This name comes from naturalist George Albert Boulenger, who described the gecko as “mythical.”

3. They are masters of disguise

One of the most distinctive features of these geckos is that they have amazing camouflage abilities.

Not only is their coloring and tail shaped designed to mimic the look of dead leaves but so is their entire body. They have lines along their back that look like the veins of a leaf.

Satanic leaf-tailed geckos spend most of their day hanging motionless from branches or hiding among the leaves. They will also flatten themselves against tree trunks while they sleep, all but disappearing from sight. 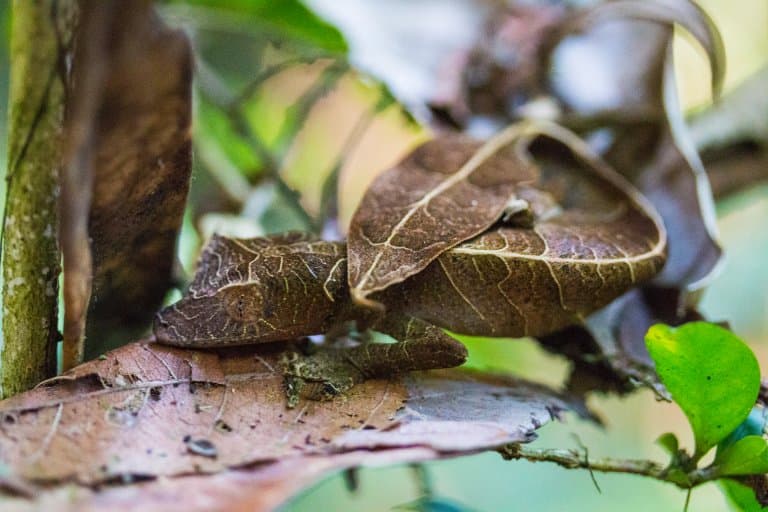 4. They have no eyelids

Geckos have large eyes without eyelids to protect them.

Instead, their eyes are covered by a transparent membrane. To keep them clean and moist, the gecko will lick its eyes periodically with its long tongue.

5. Geckos are sensitive to light

The pupils of leaf-tailed geckos are vertical and have a series of pinholes that enlarge at night. This enables these lizards to gather up as much light as possible and identify things (including colors) at night.

However, this also means that their eyes are also far more light sensitive than human eyes. Satanic leaf-tailed geckos and other nocturnal gecko species can see up to 350 times better in low light than humans. 2

6. They can scream when threatened

Geckos are the most vocal of all lizards. They have the ability to produce not only complex mating calls, but load distress calls when threatened.

While geckos are more likely to run and hide than fight back, this isn’t always possible. When they find themselves in a situation in which they need to defend themselves, the satanic leaf-tailed gecko will open its mouth wide, showing off the red color and letting out a loud cry. 3 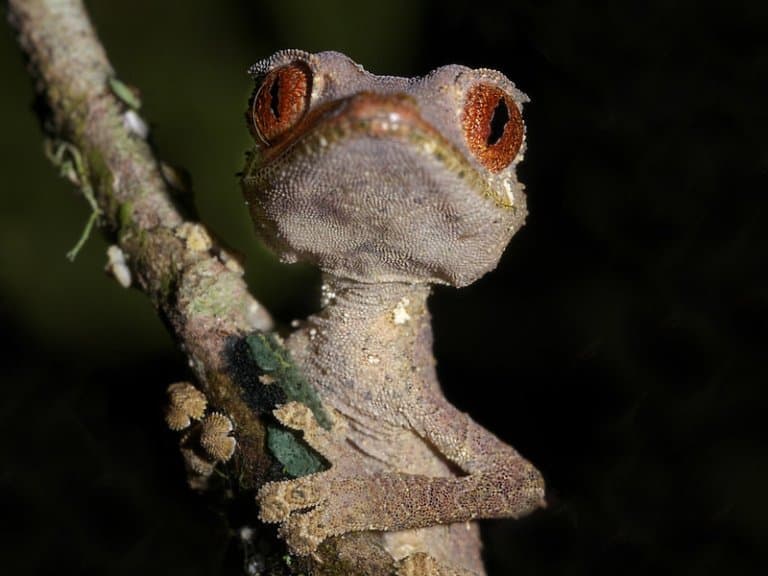 7. Satanic leaf-tailed geckos have a lot of teeth

Leaf-tailed geckos have more teeth the most mammals, birds, and reptiles. Their lower jaw can have between 97 and 148 teeth, while their upper jaw has between 112 and 169 teeth. The number of teeth can vary since the teeth can be lost and replaced over time.

However, it is unknown why they have a need for so many teeth. Leaf-tailed geckos are protected and occur only in the undisturbed forests of Madagascar, so not much is known about their eating and hunting habits in the wild. 4

8. Males and females are easy to differentiate

The sex of a gecko can be identified the moment it hatches.

The tail of a male satanic leaf-tailed gecko has serrated fringes and hemipenal bulges. Females, on the other hand, lack a hemipenal bulges, and their tales are more smooth, closer to the look of a fresh leaf instead of a decaying one.

9. Adhesive scales make it easy for them to climb trees

Leaf-tailed geckos have an increased number of adhesive lamellae on their toes compared to other geckos. This allows them to cling to smooth substrates, including plexiglass.

However, this only works on smooth surfaces. To move around on rough surfaces, geckos utilize their claws. 5 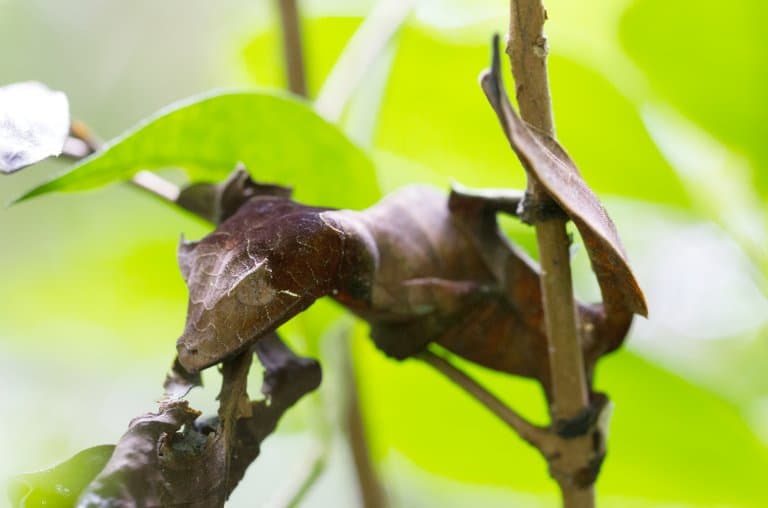 10. Geckos are experts at evading predators

Leaf-tailed geckos have mastered the art of camouflage for a reason, to evade predators. In most cases, a gecko will prefer to dodge a fight than engaged in one.

They not only use their unappetizing-looking tail as a distraction. They can quickly flatten against a surface to blend in.

In dire circumstances, a gecko will even shed its tail to help it escape.

11. Hatchlings are independent at birth

Baby geckos hatch after 60 to 70 days of incubation. These hatchlings, which look like mini versions of an adult gecko, are completely independent and receive no care from either parent.

Because of its unique look and camouflage abilities, the satanic leaf-tailed gecko has become a popular pet. However, they do require a more advanced level of care, so ownership isn’t recommended for novice reptile keepers. 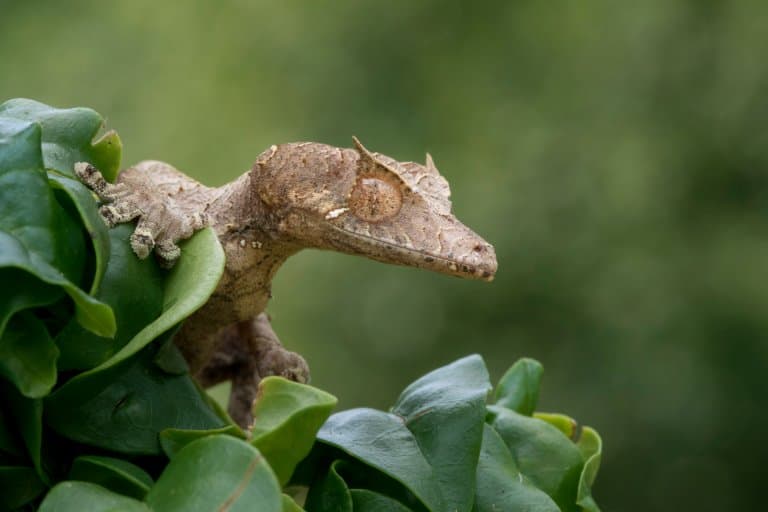