On the seafloor of the Northwest Pacific Ocean lives a very angry fish with a bizarre name and a parachute on its face, which it uses as a weapon.

Named for its huge mouth and aggressive temperament, the sarcastic fringehead is a fascinating small saltwater fish, which exists in perpetual intense competition with others of its own kind. 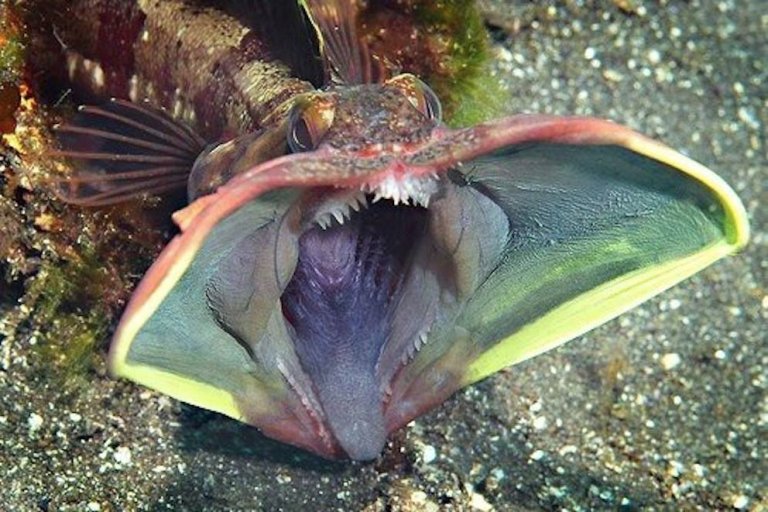 They are found in the Pacific waters from San Francisco to central Baja California in the USA between 10 – 250 feet in depth.

The sarcastic fringehead is a species of blenny, belonging to the order Blenniformes; a diverse group of species which can be found throughout the world in marine, brackish and freshwater habitats.

The family Chaenopsidae, of which the sarcastic fringehead is the largest member, is a group of scaleless, elongated blennies that strangely lack the lateral line found in the majority of other fish species. There are over 900 species of blenny, most of which are relatively small, benthic dwellers.

Blenniformids tend to be reclusive, either burrowing into soft sediments or occupying cracks, crevices and burrows.

The sarcastic fringehead spend much of their time in their ocean floor dens, but when they do swim it’s in short, dart-like movements – to diet on small crustaceans, or fiercely defend its terrority.

1. ‘Fringehead’ refers to the floppy tissue above the fish’s eyes

While ‘sarcastic’ is thought to derive from from the Greek word sarkázein, which means ‘to tear flesh’ – referring to their aggressive behaviour. 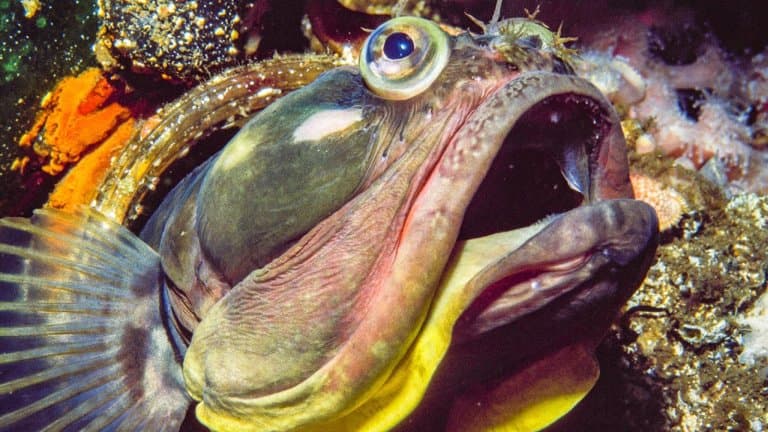 Many species within Chaenopsidae live permanently in holes or cavities, and sarcastic fringeheads are no exception.

They stake a claim over a territory centred around an abandoned clam burrow, large empty snail shell or other suitable crack or crevice. 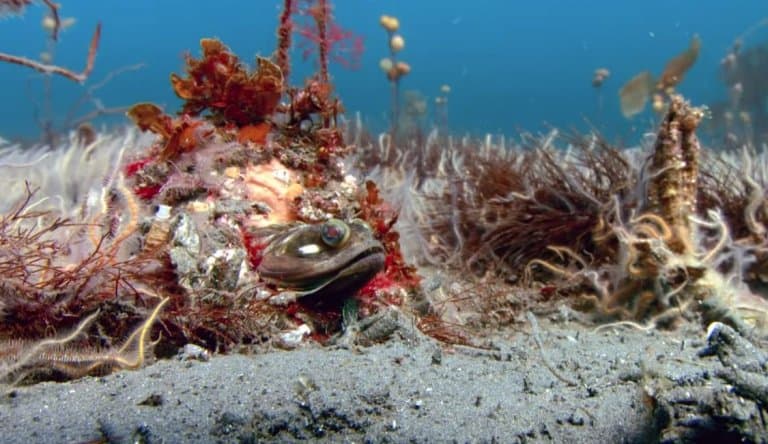 3. They’ll even live in man-made homes

As long as their home has the right dimensions, sarcastic fringeheads are not fussy over what it’s made from.

They are often spotted living inside cans, bottles and other human rubbish that has made its way into the ocean.

4. They are fiercely protective of their homes

To a sarcastic fringehead, a high-quality home is a secure space of just the right size, positioned in an area with a dependable food source.

These are few and far between, so fringeheads aggressively defend their territories against conspecifics, other ocean creatures and even human divers!

5. The best homes are worth competing for

Female sarcastic fringeheads choose males with the most desirable homes as their mates.

This makes competition between males particularly intense, and is thought to be a large factor in the evolution of their extraordinary mouths. 1

6. They have an infamous ‘Demogorgon’ from Stranger Things mouth

When threatened by other Sarcastic fringehead, they are able to open their mouths to horrifying circumferences – larger than their own head, displaying two rows of sharp teeth. 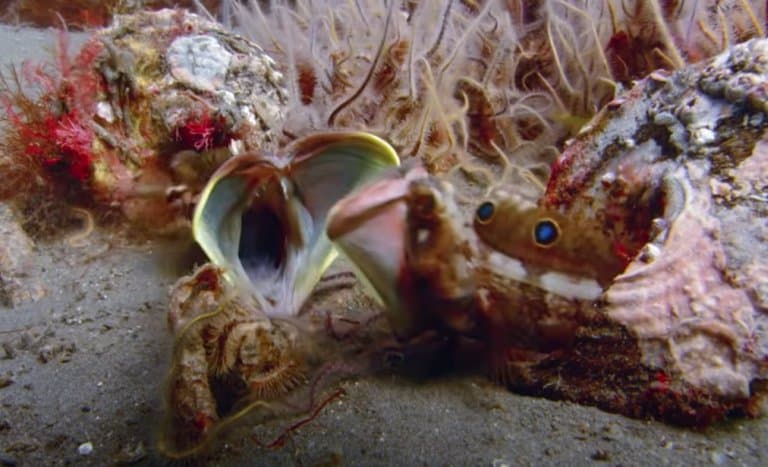 This is in an effort to say ‘I am bigger than you’ and scare away the competition.

7. Sarcastic fringeheads fight each other with a ‘kiss’

Riled individuals face-off by slamming their huge, open mouths together in a strange ‘who has the biggest mouth competition’.

When sarcastic fringeheads perform their famous gape display, they emphasise their physical size, reveal their double row of teeth, and also flaunt muscles belonging to the adductor mandibular complex.

These muscles are responsible for closing the mouth and their size gives an accurate measure of their bite force.

8. Evolving their weaponry has had its drawbacks

Their disproportionate jaw morphology of the sarcastic fringehead is thought to actually hamper its ability to feed compared to the smaller-mouthed species with which it shares its genus.

This reflects the extreme selective pressure faced by males; when it comes to reproduction, being able to see off rivals is more advantageous to sarcastic fringeheads than being able to feed efficiently.

9. There’s more to their displays than meets the eye

The skin stretched around the elongated jawbones of the sarcastic fringehead is known as the buccopalatal membrane, and has been observed to reflect ultraviolet light.

The yellow outer edges of their mouths are also fluorescent, and it is thought that the brightness of these pigments relates to the fitness of an individual. 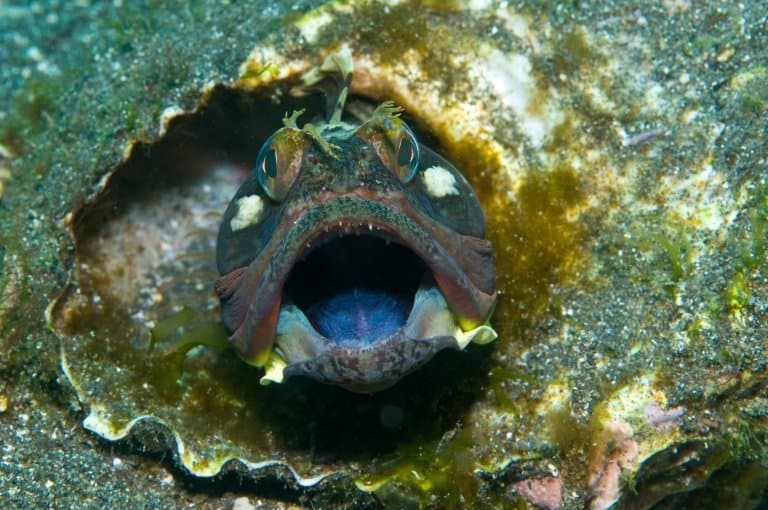 If two males find each other to be physically well matched, the only way to resolve their disputes is by entering into single combat.

Flaring their mouths as wide as they can, the two fish swim directly against each other, each trying to push the other backwards and thereby prove their superior strength.

11. Their aggressive nature has a purpose

Through their elaborate displays, individuals are able to accurately size each other up and avoid entering mismatched physical confrontations that could lead to injury.

Once a female has found a male with a desirable territory, she lays her eggs inside the male’s home and then leaves.

The male then guards the eggs on his own until they hatch. 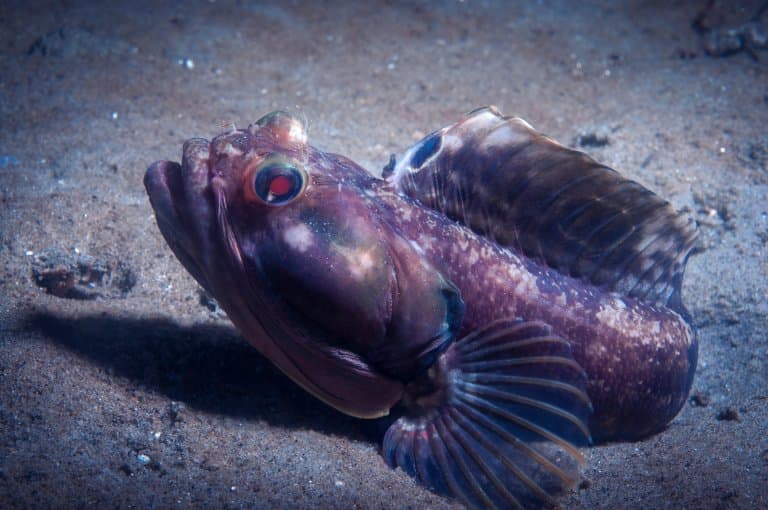 13. Their bizarre adaptations have evolved twice

Compared to their close taxonomic relatives, sarcastic fringeheads are larger, have particularly high levels of aggression, and are equipped with some freaky jaw morphology. Some truly unique adaptations? Nope!

The long-jawed muscucker (Gillichthys mirabilis) has evolved a spookily similar set of features through convergent evolution; it is thought that their comparable burrow-dwelling lifestyles, extreme competition between males and a hefty dose of pure chance have driven these remarkable resemblances. 2