When it comes to appearance, few moths are as easily identified as the rosy maple moth. Clad in neon pink and yellow, these woolly moths can be found in a range of areas along the east coast of North America.

As nocturnal herbivores, they’re often found in temperate deciduous forests during the more pleasant months where they can be observed living among some of their favorite trees (maple trees, which is how they’ve earned their name!) 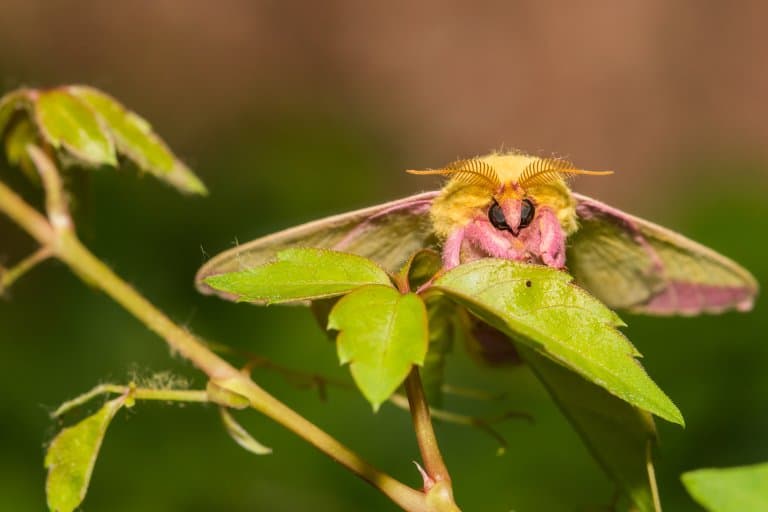 While they’re known most commonly as the rosy maple moth, these insects have a few other names too – some of which depend on their stage of life.

Rosy maple moths are distinguishable by their incredible bright pink and yellow color and wooldy body. But their color can vary to more cream and and white.

The IUCN Red List has listed the Rosy Maple Moth as species Not Evaluated. However, habitat loss is a concerning threat.

While it may be shocking, rosy maple moths don’t have mouths – and many other adult species of insects are the exact same. 1

And, if you’re wondering how they eat, don’t worry – they don’t! Rosy maple moths get to enjoy a sampling of different maple and oak leaves as larvae. However, once they grow into their adult moth forms, they lose their mouth and no longer eat. At this stage in their life, they don’t have much longer to live, and their main focus in breeding. 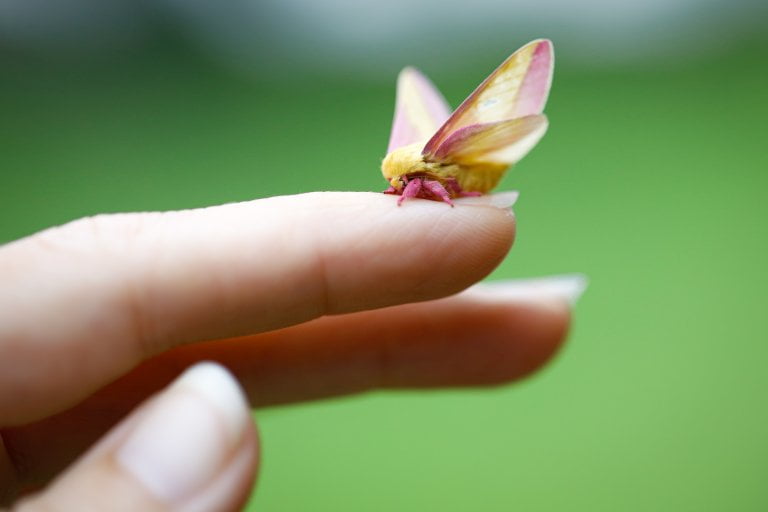 2. They can lay up to 200 eggs in a single breeding season

While it may be sad that these amazing moths are only alive for a short time, they spend the remainder of their lives as adults ensuring that the species as a whole will be around for a while.

3. They are threatened by habitat loss

Despite not being an endangered or even threatened species, the rosy maple moth is still in trouble. Deforestation occurs when trees and forests are cut down in order to make room for something else, usually towns or farms.

Since the rosy maple moth depends on specific species of trees for survival, habitat loss is posing a major threat to them. This is because it not only removes their homes but also their breeding and feeding areas. 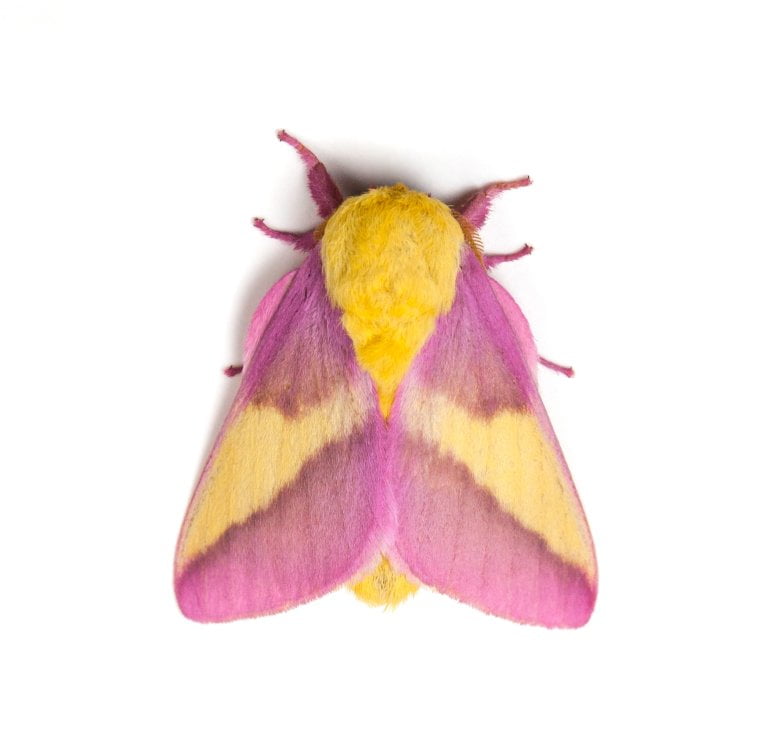 But that can still communicate in many other ways! Since rosy maple moths don’t have auditory receptors, they’re unable to receive and interpret sound waves in the way that other animals, like humans, can.

Instead, these moths use their entire body to help interact with their surroundings. This can include their antennae, palps, setae, and legs. Setae are small, sensitive hairs found on the moths that can receive information from the environment and transmit it to the brain.

5. They start in a different form

Like many other species of moths and even other types of insects, you won’t find a baby rosy maple moth flying around. Instead, they spend the first few weeks of their lives with an entirely different appearance as the green striped maple worm (or greenstriped mapleworm)!

As the maple worm gets older and goes through metamorphosis, it’ll trade its green stripes for the moth’s iconic bright pink and yellow markings.

6. Out of all the silk moth, the rosy maple moths are the smallest

Despite being known as the “great silk moth”, rosy maple moths are actually the smallest silk moth around. In fact, even female rosy maple moths, which are larger than their male counterparts, still aren’t larger enough to compete with some of the other silk moth species around.

The largest silk moth can be as large as 16 centimeters. That’s more than five times the size of even the largest rosy maple moths! 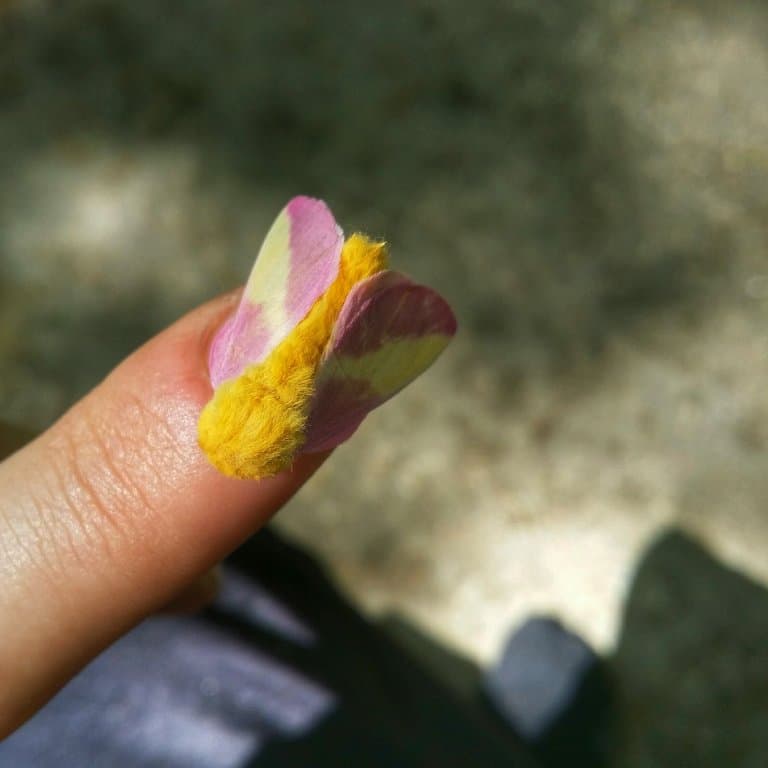 7. As larvae, they can deliver a dangerous sting!

Even though they’re harmless as adults (mostly due to the fact they have no true mouth to bite you with), as larvae, the rosy maple moth can deliver a venomous sting! While it’s not enough to be fatal for most humans, their small spines can be painful if handled the wrong way, which is why it’s always best to observe unknown species from afar – even insects like these.

Spiny insects with poison tips can also be dangerous for pets, especially if they accidentally eat one!

8. Their bright coloring is camouflage

When it comes to staying hidden in nature, it may seem that the rosy maple moth’s bright yellow and pink would be the least helpful color pattern. After all, other insects are able to disguise themselves in less conspicuous ways, such as blending in with dried leaves and sticks.

However, due to the fact that the maple moth has made its home among many varieties of flowering trees, having a dark pattern would actually make them stand out more! Their pink and yellow splotches fit in perfectly with flowers, helping protect them from predators like blue jays and titmice

Plus, the rosy maple moth isn’t the only North American moth you can find with this eye-catching pattern. The primrose moth (Schinia florida) also flaunts a vibrant and similar color scheme, helping us to better understand how colors are used for protection. 2 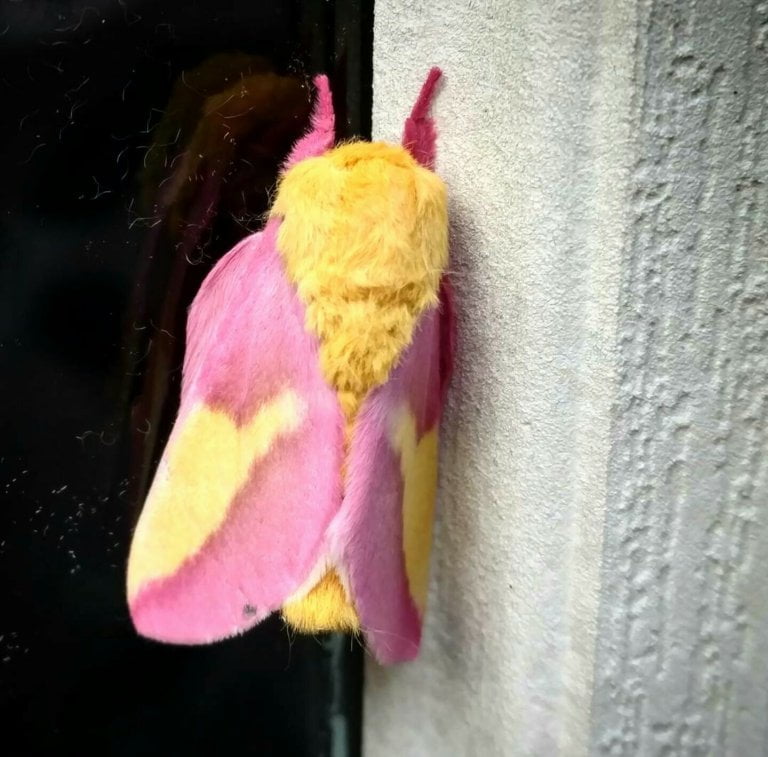