Also known as the Galapagos batfish, the red-lipped batfish is a strange and surprising fish found off the coast of the Galapagos Islands and Peru.

With their bright red mouths, strange ‘nose’ and unusual behaviors, it’s hard to miss one of these sea creatures. 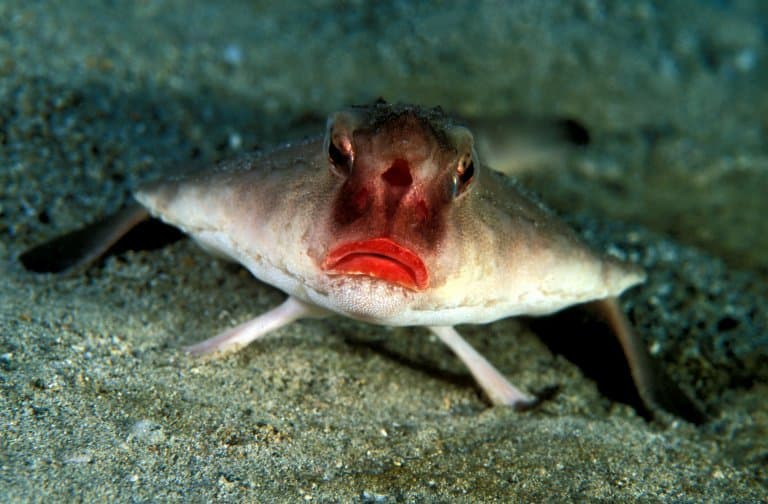 The red-lipped batfish is what is known as a piscivore/invertivore. This means that their diet consists of small fish and small invertebrates. They’re related to several other color-lipped batfish that you may find in the Pacific Ocean, such as the rosy-lipped batfish.

When it comes to fish, the red-lipped batfish is probably one of the most unfish-like fish there is. From walking to “fishing” for other fish, there’s no end to the surprises that this unique species offers.

1. They look like they’re wearing lipstick – and we don’t know why.

A list of facts about the red-lipped batfish wouldn’t be complete without talking about their iconic mouth. However, despite studies, we haven’t been able to pinpoint the exact reason they sport this red pout. 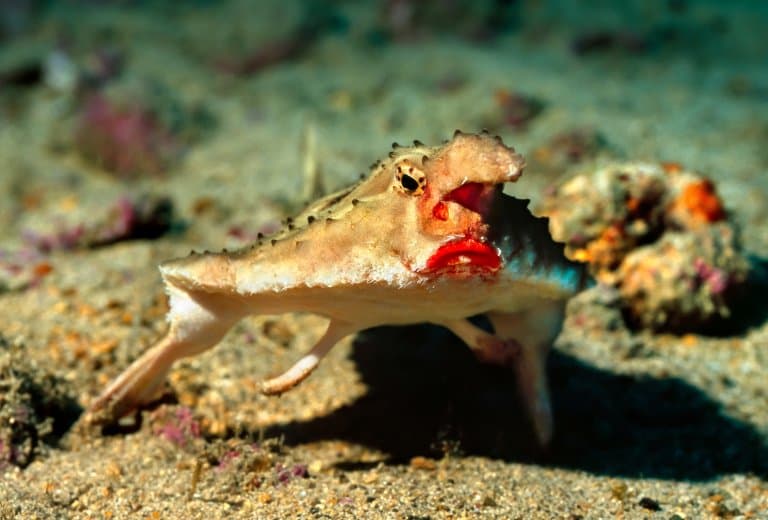 Some studies believe that it helps them find a mate, which would make sense consider the great lengths some species go to when finding love! 1

2. The red-lipped batfish is a deep-water diver!

You won’t find the red-lipped batfish surfing the waves. Instead, you’ll need to put on your scuba diving gear to meet one face to face.

The red-lipped batfish is mostly commonly found at depths ranging from 3 to almost 80 meters deep. However, they can be found in waters as deep as 120 meters. That’s almost like putting the Great Pyramid of Giza completely underwater! This is similar to the hippopotamus, which doesn’t actually swim but instead runs along the bottom of the river! The red-lipped batfish can do this thanks to their modified fins which act as a type of “leg”. While they’re still able to swim, they’re much better off strutting across the ocean floor.

4. They have no known predators.

Despite being a smaller fish, the red-lipped batfish has no direct threats that we know of. One reason for this may be the fact that they are bottom dwellers in such deep-water areas. This may help protect them from many large animals that could otherwise be predators.

While they don’t have any predators in the ocean, however, there are still a few threats that pose a danger for the red-lipped batfish. These include coral bleaching and rising temperatures, as they can change the environment around the red-lipped batfish and reduce their access to their favorite foods.

5. The red-lipped batfish ‘nose’ is actually an illicium to attract prey.

You may also know them as a type of angler fish. This means that they have a specific body part on their head known as an illicium. 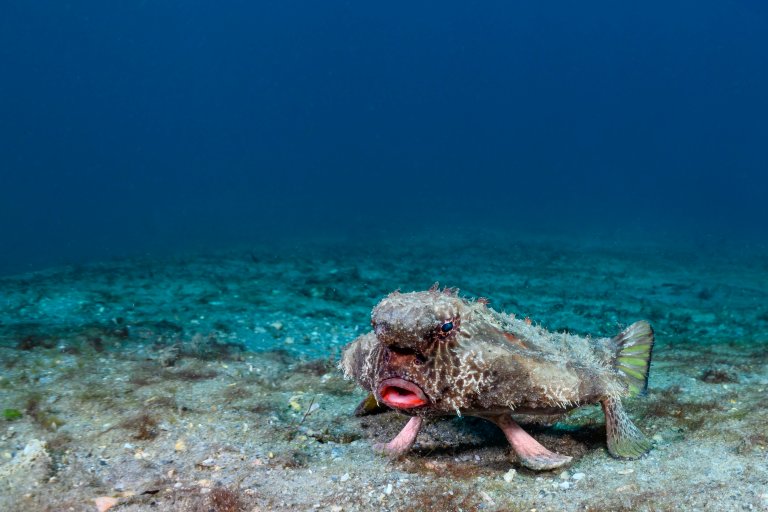 The most common angler fish is the anglerfish itself, which you may be familiar with thanks to certain movies. Rather than having lantern like appearance, however, the red-lipped batfish’s illicium almost looks like an out of place nose! This only furthers their funny and strange appearance.

6. The red-lipped batfish get their name from Darwin.

That’s right – Charles Darwin, the famous Victorian scientist who first introduced the idea of evolution. While Darwin himself didn’t get to meet one of these strange fish during his time in the Galapagos Islands, he certainly would have loved to – which is why the discoverer of the red-lipped batfish decided to name them Ogcocephalus darwini after the explorer himself.

This is because the red-lipped batfish is endemic (this means that they’re only found here) to the Galapagos Islands and surrounding waters where Darwin studies, and they also represent many of the key adaptions that he first studied in finches and other species.

Most of the time, if you go deep enough in the ocean, several of the species you’ll encounter will pose a threat to humans. From sharks to electric eels to venomous sea snakes, the ocean is teeming with dangerous species.

The red-lipped batfish, however, is completely harmless to humans. They’re a bit unusual, and their appearance is surprising, but as long as you’re not a small fish or invertebrate, you don’t need to worry about making your way onto their menu.

The red-lipped batfish doesn’t have any venom or poison either. Since they live in such deep waters with no natural predators, they never had to adapt any of these protective measures.