Rattlesnakes aren’t a single type of snake. Instead, there many different types of rattlesnakes in two different genera: Crotalus and Sistrurus.

Rattlesnakes are a type of pit viper, and all species are considered extremely venomous.

They are infamous due to their rattle at the end of their tails, which they vibrate to produce a rattling sound as a warning for predators. 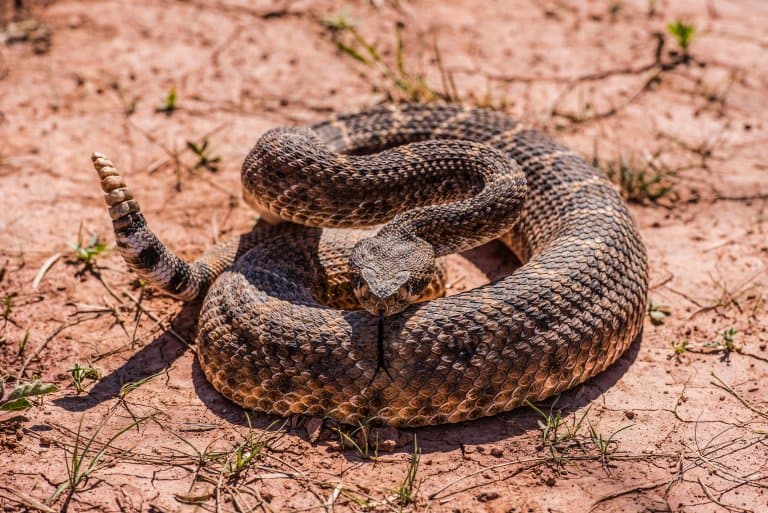 There are 36 different species of rattlesnake in the western hemisphere, and as many as 70 subspecies. While there is no name to tell the difference between a male and female rattlesnake, there is one for babies: snakelets!

Rattlesnakes inhabit grasslands in warm areas, such as the southern United States as well as Central and South America. However, you can find them almost everywhere in the continental United States. The state with the most diverse rattlesnake population is Arizona, with around 13 different species of snake found here.

All rattlesnakes are vipers, which means they are venomous, and have long, hinged fangs which they use to inject venom into prey, or in defence.

Rattlesnakes are predators that hide waiting for prey, or hunt for small animals in their burrows. They diet on rabbits, mice, rats, small birds, lizards and other small creatures.

Rattlesnakes conservation status depends on the species, but many rattlesnake are threatened by habitat destruction, poaching, and campaigns to exterminate them from near urban areas.

Both the rattlesnake’s common name and scientific name come from instruments.

For their common name, rattlesnakes are named for the loud rattle on their tail. When vibrated, their rattle creates a sound that lets predators know not to come any closer.

However, their scientific name also comes from an instrument. There are two main genera of rattlesnakes: Crotalus and Sistrurus.

The name Crotalus is derived from the Greek word meaning “castanet”. This is a small percussion instrument common in areas near the Mediterranean.

Sistrurus, on the other hand, actually comes from the Greek word for “tail rattler”. However, it can be traced back to Egypt, where there was an instrument known as sistrum, which was a type of rattle. 1 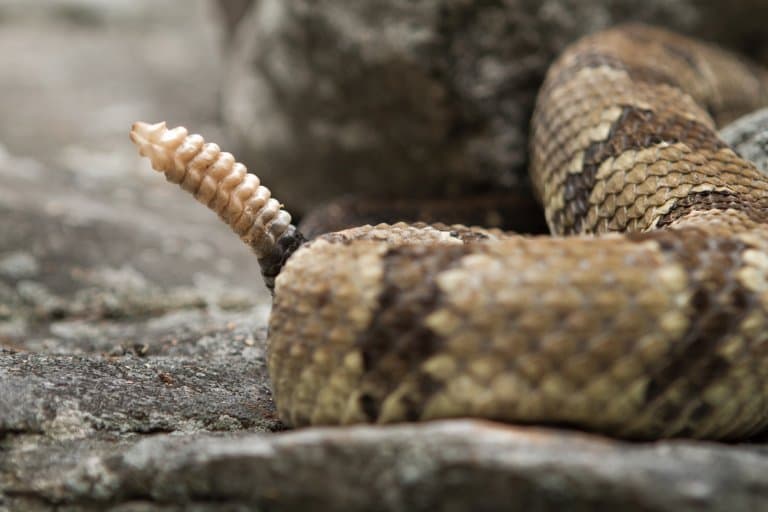 Male rattlesnakes will ‘fight’ over females by interwrining their bodies with their heads held high, rotating, and knocking each other to the ground.

Usually the largest snake wins, and gets the mate.

3. The largest species is the eastern diamondback rattlesnake

With so many types of rattlesnakes, they can come in many diverse shapes and sizes.

The largest species of rattlesnake is the eastern diamondback rattlesnake, which is actually the most venomous snake in the United States, if not all of North America.

Eastern diamondback rattlesnakes can grow to be up to eight feet long. The largest to ever be recorded sized in at 244 centimeters. 2

4. Most snake bites in North America can be traced back to rattlesnakes

Most of the snakes bites recorded in North America can be linked back to one of the many species of rattlesnakes. However, this isn’t because they’re naturally aggressive and out to hunt humans.

Instead, their natural camouflage can make it difficult for humans to spot them, and, by the time you hear their rattle, it can be too late. People might accidentally step on part of the rattlesnake, causing it to bite out of fear or pain.

While rattlesnakes are some of the most venomous snakes in the western hemisphere, their bites are rarely fatal in the United States. This is because most hospitals are prepared to treat snake bites with antivenom. If you happen to be bit by a snake, especially a rattlesnake, make sure to get to the hospital promptly. Waiting too long can lead to permanent, if not fatal, damage. 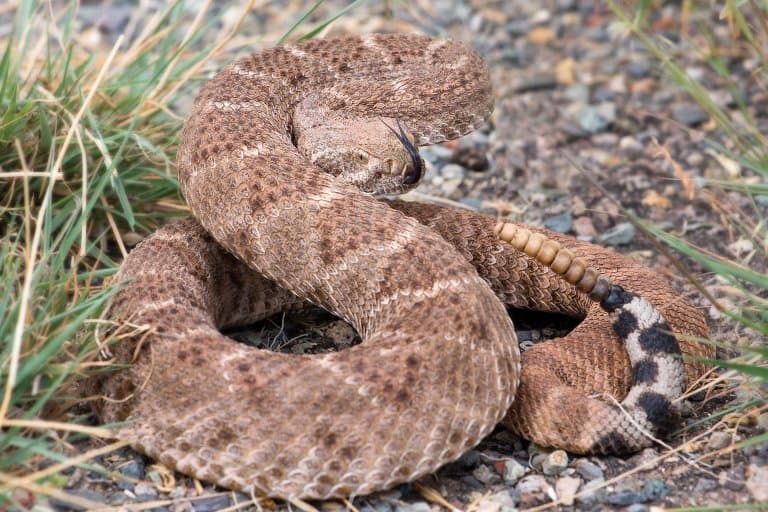 With approx. only 5 deaths. This is due to antivenom often being readily available, and if a person is treated within 2 hours of a bite, the probability of recovery is higher than 99%.

6. They have infrared vision

Both their eyes, and a set of heat sensing ‘pits’ on their face enable rattlesnakes to see prey by their heat signature.

Special receptors inside their pit allow rattlesnakes to create thermal maps of their immediate surroundings, and see warm bloodied animals to eat.

Rattlesnakes also have vertical pupils, a little bit like a cats eyes. These are thought to improve their depth perception, and are found more in ambush predator animals. 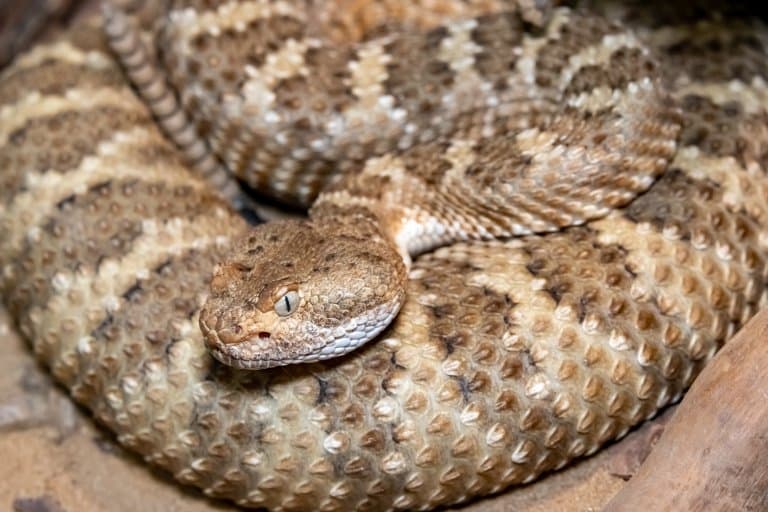 6. Common kingsnakes are immune to their venom

Not everyone is at risk when it comes to the rattlesnake’s venom, however.

Take the common kingsnake for example. These snakes have managed to evolve a resistance to the rattlesnake’s venom.

This allows them to hunt these venomous snakes, making them one of their more notable predators.

This means they carry and incubate their eggs inside their body, and give birth to live young. Most other snakes lay eggs, which hatch eggs on land.

Rattlesnakes can take years to mature, and mothers usually only give birth every few years.

8. Only 20% of rattlesnakes make it to their second year

This is because they are preyed upon by such a high number of predators as infants, when they are still relatively weak and immature.

Eagles, hawks, owls badgers, weasels, other snakes, coyotes, feral cats and more all prey upon them.

On occasion, even a very hungry adult rattlesnake will cannibalize an infant.

9. They brumate in large numbers – some groups nearly 1,000 individuals big!

Like many other types of reptiles, rattlesnakes go through a light hibernation phase in the winter known as brumation.

During this time, hundreds, if not thousands, of rattlesnakes will join together in a single den or location!

10. Rattlesnakes rattles are made of keratin

Believe it or not, but a rattlesnake’s rattle is actually made of the same material as our hair: keratin. Keratin is actually a type of protein, which can make up many parts of the body – human and snake. 3

11. Their rattle muscles are capable of moving 50 times a second

This is one of the fastest known muscles in the animal kingdom, and rattlesnakes are amazingly able to sustain a rattle for up to 3 hours at a time.

12. They get a new rattle segment each time they shed

Like rings on a tree stump, a snake’s rattle can actually give you a good estimate of how old it is.

Every time a rattlesnake sheds its skin, it grows a new segment on its rattler. This is a process known as ‘ecdysis’, and it can happen anywhere from 4 to 12 times in a single year.

However, snakes can also lose their rattles, such as in the instance they’re attacked by a predator – so for this reason, they are unreliable.

13. Their fangs are hinged

They are extremely sharp, hollow and are connected by venom ducts – which allow rattlesnakes to inject venom into prey like a needle.

When not in use, their fangs are folded against the roof of their mouths, only springing open when they go to attack. 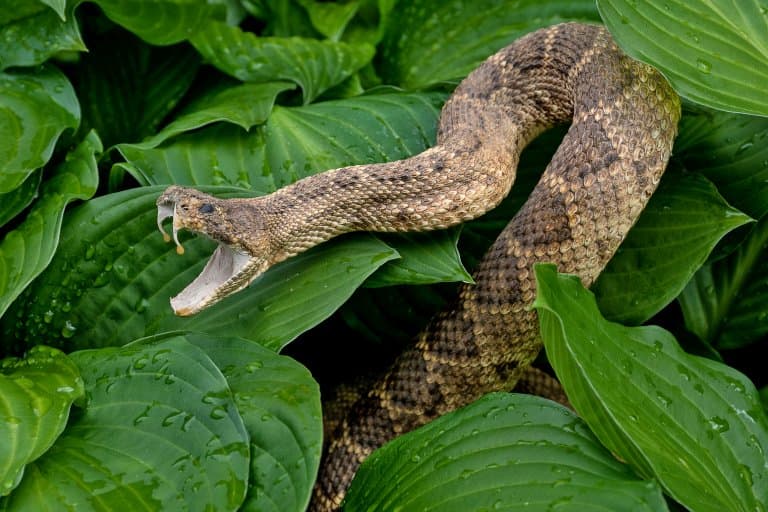 This allows limbs and wings to fold at their natural joints so they can be swallowed.

Rattlesnakes have very acidic gastric fluids that breakdown both flesh and bone, and allow it to digest their prey. 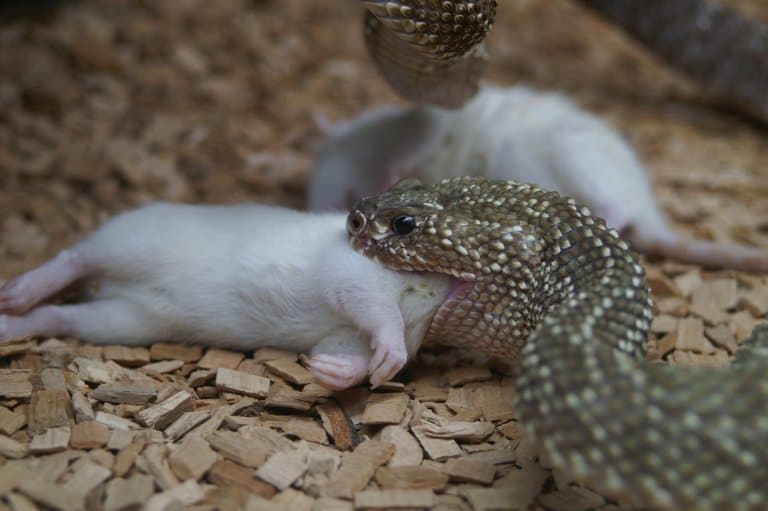 Like other types of snakes, rattlesnakes don’t need to eat every single day.

Their stomachs and digestion work much different than our own. As a result, where we may need to eat a single meal multiple times a day, rattlesnakes can survive off a single meal for up to two weeks!

Most of the 36 species of rattlesnake are classified as least concern or data deficient by the ICUN. However, sadly there are a snall number of species that are threatened with extinction.

The Sinaloan long-tailed rattlesnake (Crotalus stejnegeri) is considered vulnerable, as a continued decline has been observed, and they are thought to exist in under 10 locations.

The Tancitaran dusky rattlesnake (Crotalus pusillus) is endangered as their range is so fragmented and their population is believed to be in significant decline.

The Santa Catalina rattlesnake (Crotalus catalinensis) is listed as critically endangered, due to the introduction of a new predator in its habitat – feral cats. This has plummeted their population. 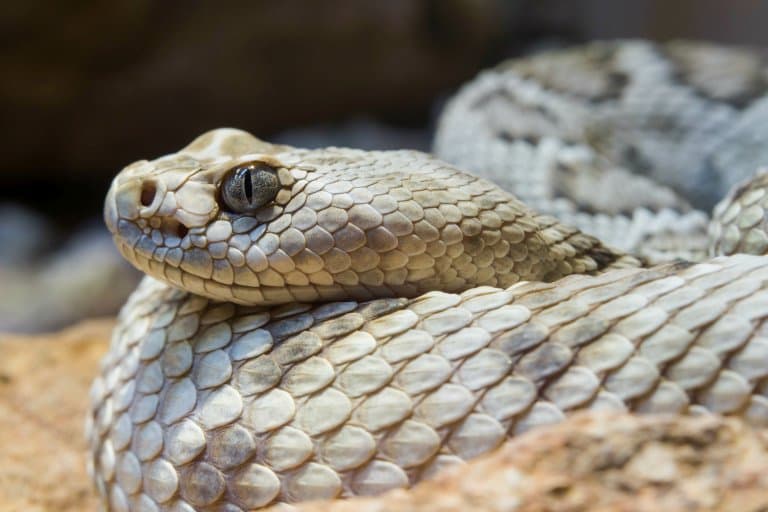