In 1906, a Brave British Explorer ventured out into “cannibal land” to hunt for insects with a shotgun. Sometime later, a much more charismatic and legendary naturalist called Alfred Russel Wallace caught a member of the same genus gently in a net, describing his euphoria as he:

“… was gazing, lost in admiration, at the velvet black and brilliant green of its wings, seven inches across, its golden body, and crimson breast… a bright gem shining out amid the silent gloom of a dark and tangled forest”.

It was a Queen Alexandra’s Birdwing butterfly, one of the world’s largest insects. Of all of these, the Alexandra Birdwing is one of the most elusive and endangered. 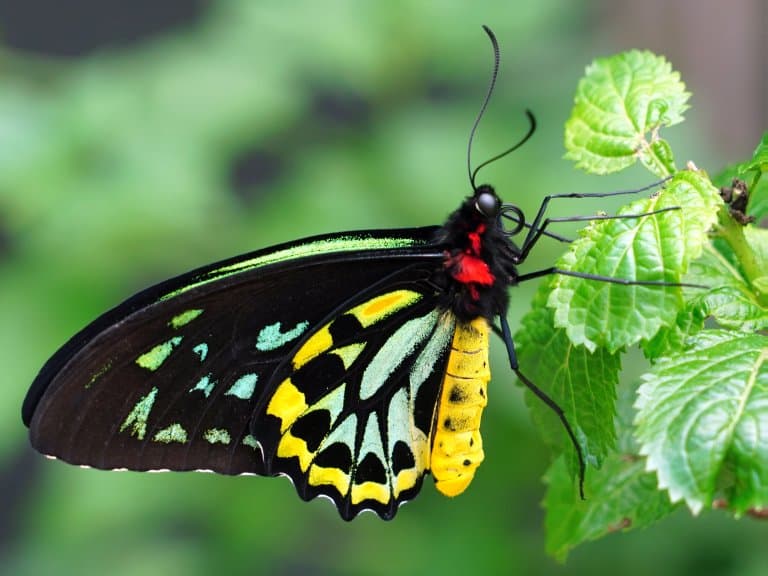 The Alexandra Birdwing was named after the queen of the same name, first collected brutally in 1906, and later established to be in rapid decline. Now, it occupies a pittance of its former habitat, having been reduced by deforestation for timber and oil.

This might be one of the rarest animals on earth, and it comes with a corresponding price tag for collectors of illegal specimens. However, if conservationists could succeed in protecting it, many other organisms would stand a better chance of survival too.

1. They are the largest species of butterfly in the world

Female Queen Alexandra’s Birdwing are generally larger than males, and can have a wingspan of up to 28cm (11 inches!).

2. The first specimen was brought down by “powder and shot”

Back in the day, the consensus among naturalists was that the best way to observe a new and rare animal phenomenon was to murder it (this has only partially changed in recent years).

In classic, old-school naturalist fashion, the first example of one of these butterflies was ‘captured’ by Arthur Stanley Meek, a Rothschild grunt, who described himself as “a naturalist in cannibal land”. After spotting a birdwing in flight “5,000 feet high”, he took it out with a shotgun to add to the collection in a museum in Tring.

Meek later went back and collected the larvae, as a way of supplying the museum with a specimen that wasn’t riddled with holes. 1

3. They have a very limited range

Still, trigger-happy naturalists represent a small minority of threats to the birdwing. Far more pressing is its relentless habitat destruction, as old-growth rainforest is devastated to make way for palm oil plantations.

Despite being an incredibly efficient oil crop, producing more oil per acre than any other, palm oil is grown in some of the last bastions of biodiversity in the tropics and is responsible for the reduction of the birdwing’s habitat to a measly 100 square kilometre; each kilometre having as few as ten females within it.

And it’s no good just planting more trees – at least not immediately; this butterfly relies on primary forest. That is, mature, old-growth trees; these, two are sought after, and the timber industry is another significant threat to their habitat.

These butterflies are now so rare that wealthy, sociopathic collectors are willing to pay upwards of $8,000 to $10,000 for one. So, between shotgun biologists and the global palm oil demand, these poor insects also have to deal with the illegal wildlife trade.

Alexandra birdwings are so big that they’re able to chase away birds. They’re quite defensive of their position, and have been known to attack animals of a similar size who get too close.

6. They mate with a spray of perfume

A butterfly that sprays perfume sounds like something out of a children’s fantasy novel, which makes it all the sadder that the Birdwing is so endangered.

During the mating ritual, the male will dance around the female, dusting her with pheromones.

In working to conserve one species, sometimes you end up inadvertently protecting others around it.

This is the case with the Alexandra Birdwing, which suffers from many of the same problems as its neighbours. In this case, we call it an “umbrella species” and this creates a sort of conservation efficiency, which can make it easier to generate funds for its protection.

As it stands, there is still a lot of information missing, especially from the lifecycle of the birdwing that could contribute to a better understanding of how to look after it. Breeding programs have long been proposed, and the success of a pioneering project in Cambridge is promising.

Being able to guarantee the survival of the species is half of the problem. The next step will be reintroductions to areas of protected habitat. 2 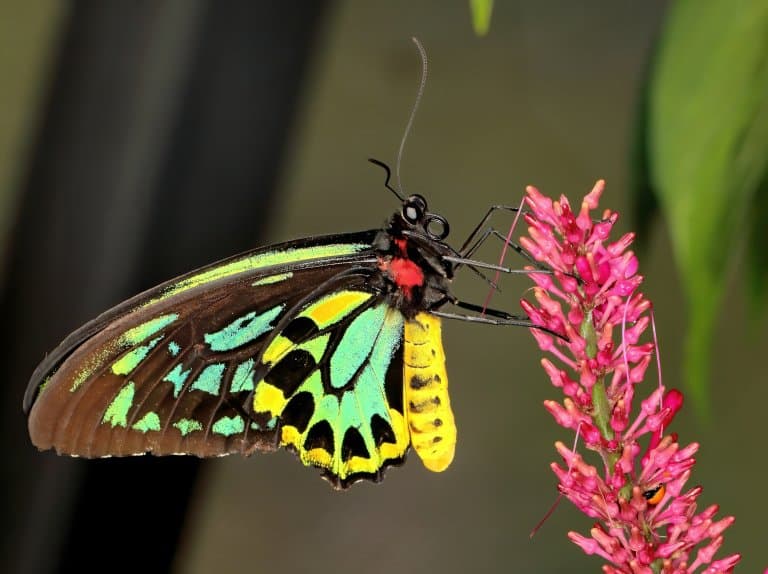 The local people of Papua New Guinea eat a lot of insects.

Most of these are foraged, but there are some which are also farmed as part of the traditional protein sources of the local diet. The larvae of the birdwing butterfly are on the menu, and conservationists need to work on projects that encourage the local populations to breed insects sustainably as a food source and protect the birdwings in the process.

Interestingly, the traditional way of catching butterflies was to make nets out of spider silk attached to sticks. It should be noted that this is a lot better for the condition of the butterfly than riddling it with shot. 3

9. They feed on some equally-beautiful plants

Birdwing butterflies prefer a type of pipevine, in the Pararistolochia genus. These plants produce a ballooning, tuberous flower that opens to a twisted, colourful mouth.

It’s as much a magical entity as pretty much everything else about the habitat that the birdwing butterfly seems to live in, and that again makes its destruction the more tragic.

10. It may be one of the rarest butterflies in the world

The Alexandra Birdwing still holds a lot of secrets. Despite its small habitat, population counts are a constant struggle. By 1992, researchers counted only 150 over ten days; in 2008, only 21 were spotted, in a density of less than one per acre.

Conservation suggestions include leveraging its exceptional value as an ecosystem service for local populations. The hefty price tag represents a lot of money – probably dangerously so – to local people, and it’s suggested that creating habitat in order to breed and sell the butterflies could solve some of the problems they face. This is likely to be a naïve recommendation unless substantial management and education in ecological principles are included in the proposal.

Sadly, the fate of the wild individuals looks bleak, though many will remain in captivity. On the other hand, if their habitat could be preserved, an untold number of other species, both plants and animals, will also benefit. 4