In the Amazon rainforest, there’s a tiny monkey, dwarfed by the evolutionary pressure of ancient habitat fragmentation.

They’re cute, relatively docile and live in tiny groups of around 6 tiny individuals. These are the pygmy marmosets, also referred to as ‘finger monkeys’. 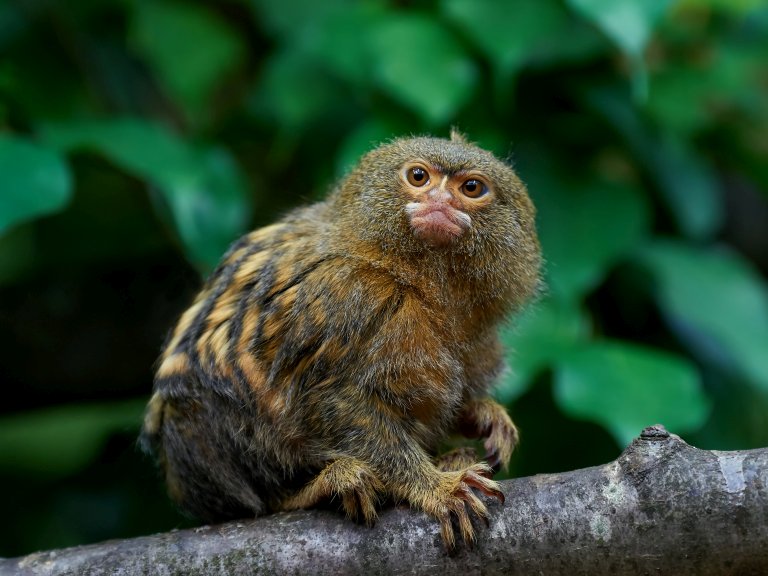 The pygmy marmoset is the smallest species of monkey in the world and they have some cool arboreal adaptations that allow them mostly safe passage in a hostile, forest environment.

They live in troops of between 2-9 individuals in rainforests in South America, including Brazil, Colombia, Ecuador, Bolivia and Peru.

Their diet is as unusual as their size, and their breeding strategy and parental care is also very unusual for primates.

Pygmy Marmosets are heavily threatened by deforestation and human intervention and are currently classified by the ICUN as vulnerable. 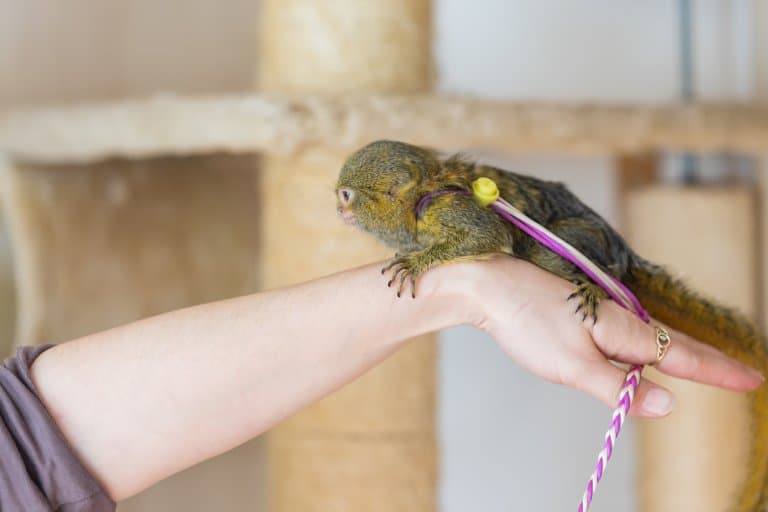 Being primates, pygmy marmosets are emotionally and cognitively intelligent and are capable of immense mental stress.

The pet trade is notorious for its utter disregard for the care of the animals it involves with, and marmosets bought as pets are often stolen from their mothers and transported in a traumatic fashion across continents. If they’re bred, they’re commonly neglected and terribly looked after.

As pets, they fare terribly.

The result is an emotionally, psychologically, and often physically damaged individual, suffering solely for the entertainment of those who want an exotic pet to play with.

Primates are hard enough to take care of in zoos, run by trained professionals. Many suffer from inadequate support, stimulation, social interaction and the imprisoning nature of captivity, just as a person would in similar conditions.

As such, they should never be considered pets or showpieces, despite how awesome they are.

The RSPCA in the UK is campaigning to make owning a finger monkey illegal, while in the US each state has different regulations. 1

3. The pet trade is one of their biggest threats

Sadly their popularity as a novelty item has led to them being hunted to vulnerable status in their natural habitats.

These animals are so sensitive to interference that even tourism has an impact on their behaviour, making them shy, nervous and less sociable with one another. This, in turn affects their development.

Increased tourism in their home ranges is correlated with increases in pet trade captures, and families are often disrupted and separated as a result.

4. They can rotate their heads 180 Degrees

As an adaptation to living in trees, the pygmy marmoset has developed the ability to turn its head all the way in the opposite direction.

This gives it a 360-degree field of view available to it while on a trunk or branch. 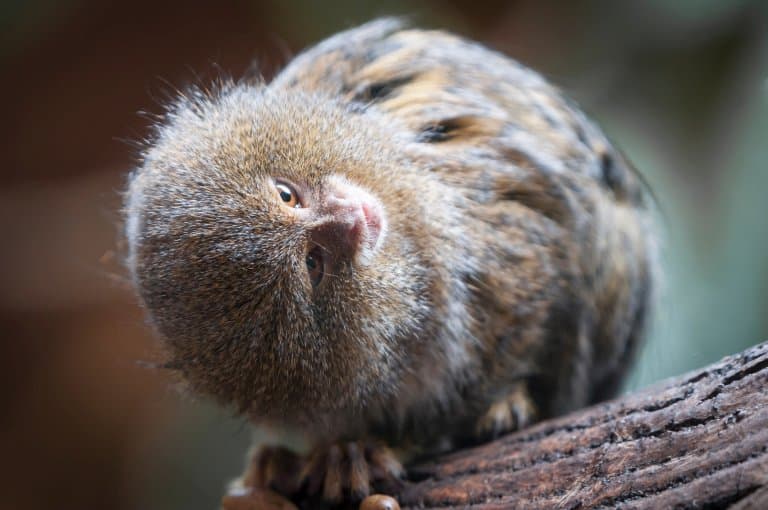 Pygmy marmosets are considered gummivores; an animal whose diet is primarily made up of tree sap. This is an unusual diet for a mammal, and requires a few adjustments to be made to the design of the animal to make it work.

Finger monkeys have an extended caecum for longer digestion time, and special incisors that allow them to scrape into the tree bark to release the sap.

While these tiny monkeys mostly eat gum, they’re also partial to an insect or two on the side and have been known to use the tree sap as a lure to draw in an arthropod to eat.

6. The pygmy marmoset can jump over 5m!

While they might be tiny, their jump isn’t. The pygmy marmoset is able to jump over 16-feet in length (5 metres) between tree branches.

They walk on all four legs and have sharp claw-like nails for clinging onto trees. 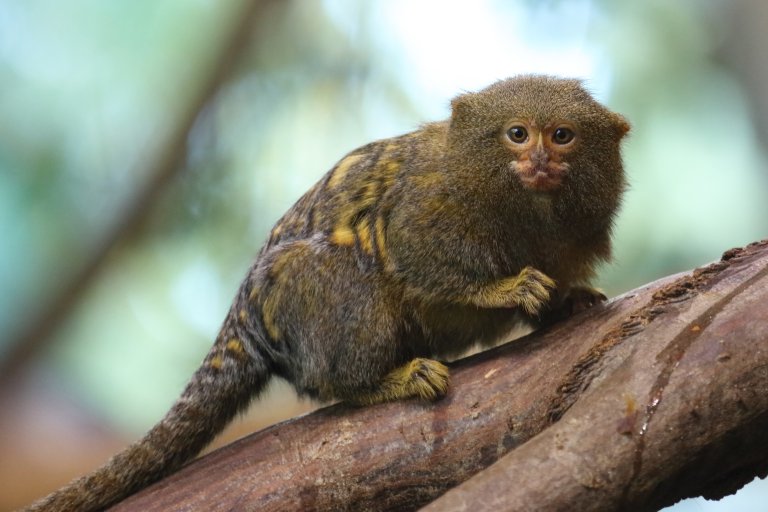 7. They have complex communication methods

You probably wouldn’t be very popular if you chose to communicate with your body odours but marmosets don’t seem to mind as much. Scent glands all over the body act as different indicators to a finger monkey’s mood, and can let male monkeys know when a female is ready to mate.

Aside from a range of chemical and visual cues to relay information, pygmy marmosets use a complex vocal repertoire.

This is particularly noticeable in the infant monkeys, whose ‘babbling’ follows many of the recognisable patterns we see in human baby speech, and appears to play a similar role.

This suggests their developmental stages have significant overlap with ours, and could even teach us some things about ourselves. 2 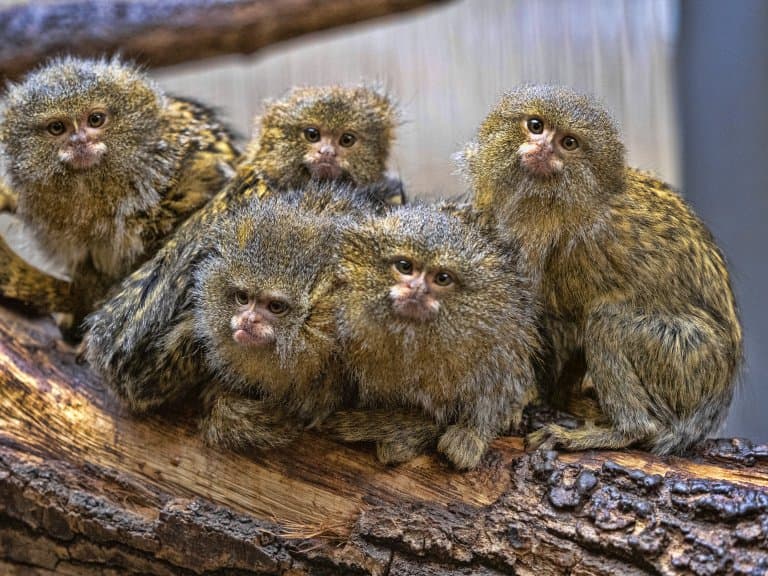 8. They fall out of trees

This is a sad fact of life, especially for an animal so adapted to arboreal life. One of the main causes of death of all monkeys, particularly in infants, is falling from trees.

Despite all their adaptations, thriving at such a height takes a lot of skill and learning.

Tree-dwelling is one of the reasons primates evolved large brains and binocular vision, but even this isn’t always enough.

In many primates, opposable thumbs also help, but marmosets are one of the more primitive forms of monkeys, and consequently don’t have this adaptation.

Marmosets gestate for around four and a half months, at which point they almost always give birth to twins. The babies are, unsurprisingly, even smaller than the adults, around the size of a finger.

The father is very active in his care of the young, helping to deliver, clean and carry them for the first few weeks until they are weaned.

Then, they hide away until they’re strong enough to feed themselves. 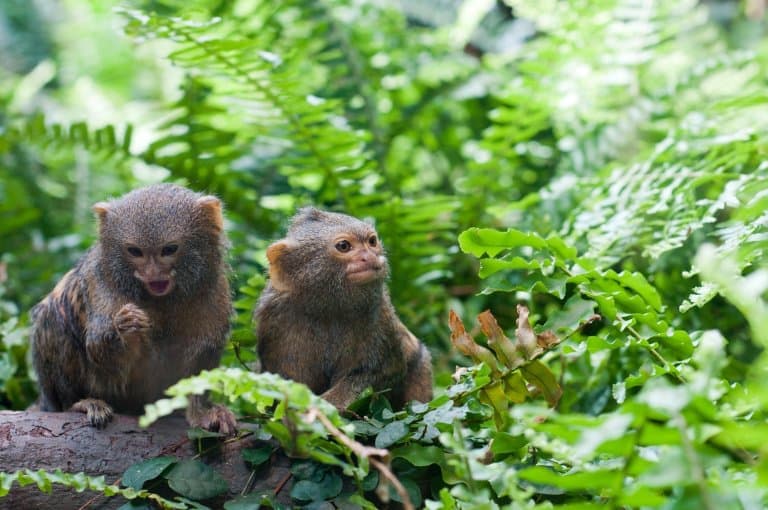 10. These finger monkeys can have trouble staying warm

Being small has its advantages. You can be easily carried, hide in all the tiny places, and you don’t need to eat very much food, which can help in times of scarcity. Of all the advantages, thermoregulation is not one of them.

Pygmy marmosets have the lowest basal rate of metabolism than any monkey measured. This may be a result of the weird food they eat, but it also means they struggle not to lose heat. Having tiny bodies really doesn’t help in this, since there is a low ratio of surface area to body mass, meaning lots of surface to lose heat through, and not much mass to contain it.

This isn’t just an issue with staying warm, it’s also a problem when trying to stay cool. With temperatures rising globally, this makes animals like the pygmy marmoset particularly vulnerable to climate change. 3