Puffins are the flamboyant little seabirds that can do it all.

Flying thousands of miles over the open ocean for months at a time? Definitely. Swimming underwater fast enough to catch small fish? Absolutely. Digging burrows that would make the average rabbit jealous? For sure.

There are three species within the genus Fratercula; the horned puffin, tufted puffin and the iconic Atlantic puffin. All are small, diving seabirds that spend most of their time roaming the open ocean, returning to land only once a year to nest in burrows on isolated, predator-free islands.

Fratercula translates to ‘little brother’ and is a reference to their colouration, which superficially resembles the black and white of monastic robes.

Puffins are short, and stocky and feed by diving into the water to catch fish and zooplankton.

They breed in colonies on coasts and islands, often referred to as Puffin Island. The largest puffin colony is in the Westmann Isles of Iceland, with over 1m birds.

Their conservation status is listed as least concern for horned and tufted puffins, while the Atlantic or ‘common’ puffin is currently classed as vulnerable.

1. Puffins are known to use tools

Atlantic puffins in Wales and Iceland have been observed using sticks to scratch themselves.

This type of behaviour, dubbed ‘body-care related tool use’, has only previously been recorded in primates and elephants, and suggests high levels of intelligence. 1

2. Digging is second nature to puffins

Puffins use their powerful beaks to chip away at the soil, then flick it out behind them with their feet like tiny, feathery dogs.

Their burrows tend to be around a metre long, and they slope gently uphill to prevent flooding.

3. They are faithful partners

Puffins form long-term bonds and mating pairs remain together for their entire lives.

Every year, during the breeding season, pairs separated by thousands of miles, for months on end, somehow reunite at the same burrow. 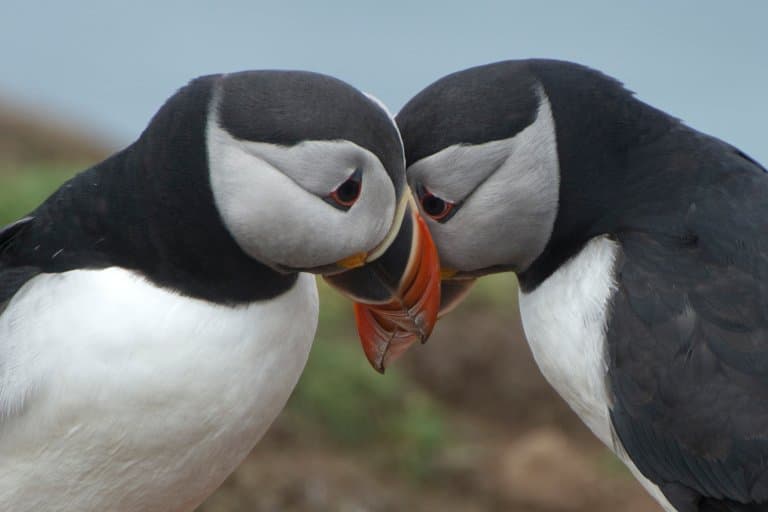 The flamboyant beak of the puffin is one of its most distinctive features, but the showy colouration is only useful during the breeding season and is actually a hindrance to the birds, making them more obvious to both their predators and prey.

Once puffins return to the open ocean after breeding, the colourful outer layer of the beak falls off, rendering it dull brown and significantly smaller.

5. They have ultraviolet coloration

Puffins have recently been found to have photoluminescent patches on their bills.

This ultraviolet coloration is obvious to birds and is thought to be a marker of fitness that helps them to choose mates.

It is invisible to humans without the use of a blacklight. 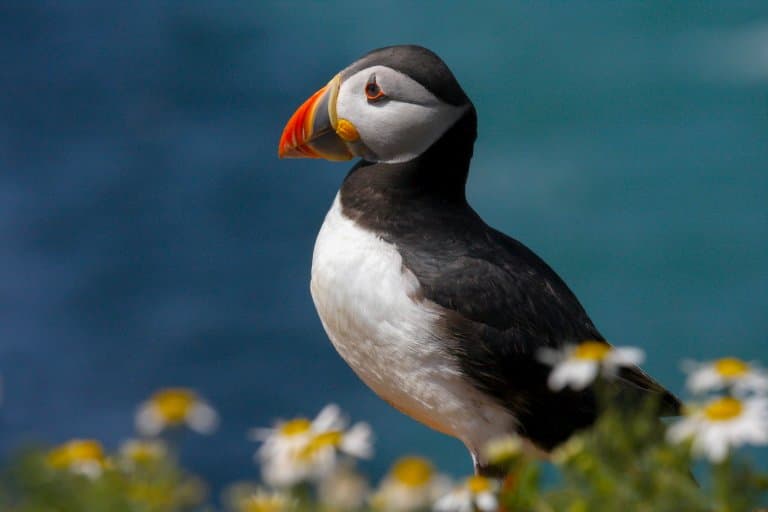 6. They use their wings to ‘fly’ underwater

Puffins have webbed feet and can paddle on the surface of the ocean like ducks, but when they dive they flap their wings to produce forward thrust.

Underwater, their feet function as rudders that help them to pursue and catch agile prey.

Puffins’ short, stout wings make them excellent swimmers, but the drawback to this is that they need to flap around 400 times per minute in order to fly.

The metabolic cost of this is extremely high; along with the rest of the Auk family, puffins burn more energy during straight flight than any other birds. 2 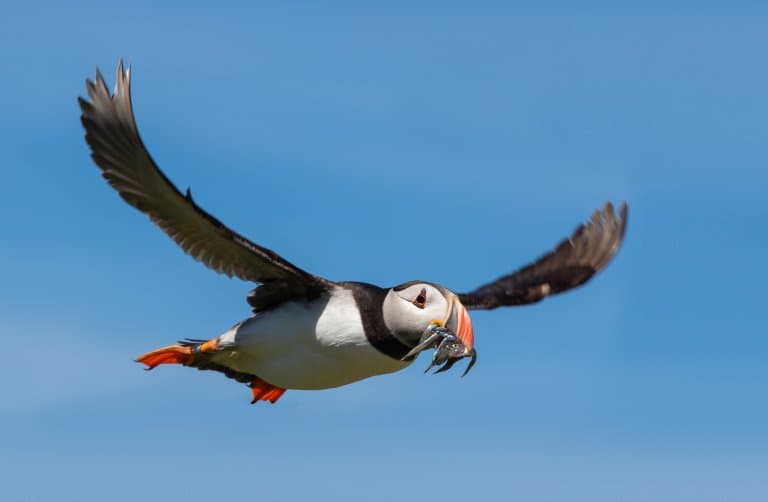 To counter this, their beaks contain large numbers of blood vessels near the surface, allowing them to quickly dissipate excess heat into the air. 3

9. They can drink seawater

Puffins have special glands behind their eyes that filter excess salt out of their blood and excrete it through their nostrils.

This adaptation allows them to remain indefinitely at sea with no reliance on fresh water sources.

10. Artificial light is impacting their survival

Puffin fledgelings, known as pufflings, embark on their first flight at night to avoid predators.

It is thought that they use the moon to find their way out to sea- because of this, bright artificial lights confuse them and cause them to crash-land in coastal towns. 4

11. They have a unique method of transporting food

Puffin beaks are specially adapted to carry up to twelve prey items at a time, draped over the lower mandible in an elegant stack.

A rough tongue holds captured prey against the roof of the mouth, allowing the beak to open and close to catch more prey without dropping the rest of their collection. 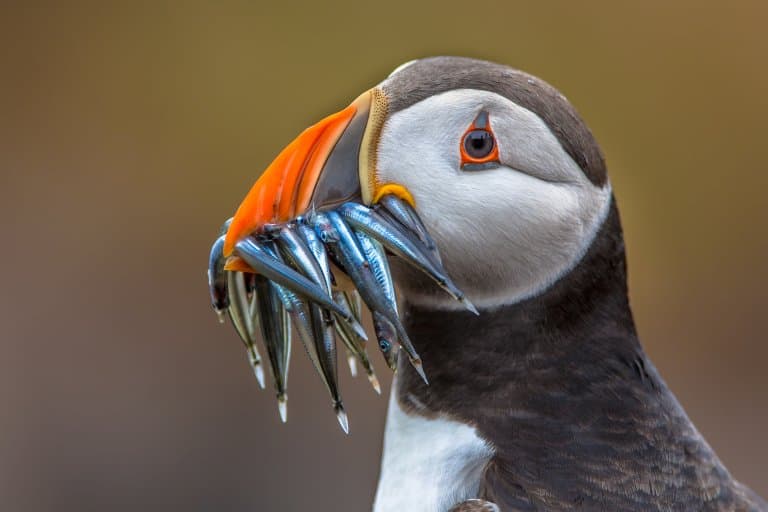 Large gulls await puffins near their nesting colonies, harassing them when they return from fishing and robbing them of their catch.

This is a natural occurrence, but by providing gulls with extra food in the form of landfill sites and dropped litter, humans have caused populations in some areas to increase sharply- resulting in increased competition and reduced nesting success in nearby puffin colonies. 5

Young puffins spend around five years wandering the oceans before they are old enough to breed, and once mature they only produce one egg each year.

This reproductive strategy ensures that the chick gets the full attention of both parents and increases fledgeling survivability, but the caveat is that puffin populations take many years to recover if they are harmed.

14. The housing market is competitive in puffin colonies

Many of the islands inhabited by puffins are also home to other burrowing seabirds, all of which are looking for somewhere to nest. On these islands, prospecting shearwaters are to blame for a large portion of the puffin eggs that are lost each season. 6

15. The Atlantic puffin is listed as vulnerable

Despite research in 2018 suggesting there are between 10-12m birds, there has been a rapid and ongoing decline in their European population. It’s been speculated this is due to an increase in predators on islands, as well as toxic contamination and climate change.

Puffins are hunted for their meat, as well as their eggs, and feathers.

They continue to be hunted in The Faroe Islands and Iceland in particular where up to 200 birds can be caught in a day on the small island of Grimsey.