The proboscis monkey – also known as the long-nosed monkey – is one of the largest Old World monkey species found only on one southeast Asian island (Borneo).

Proboscis monkeys are diurnal (most active from late afternoon to night), omnivores, and known for their unusually long noses. 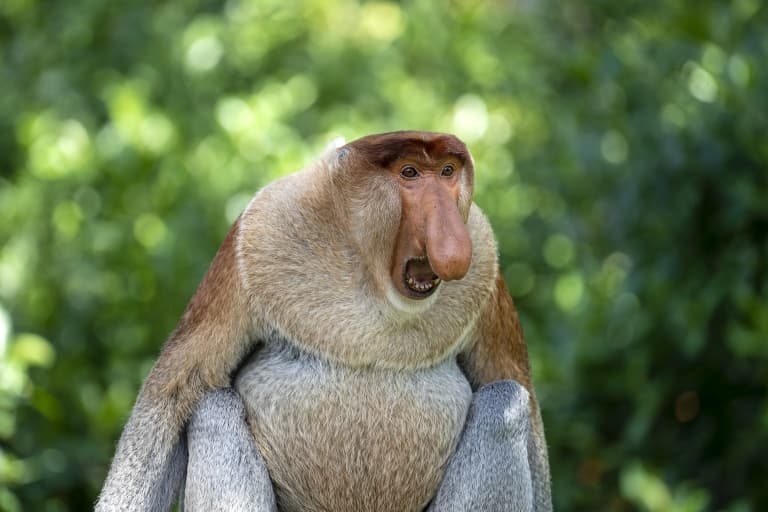 Proboscis monkeys are found in the forests of Borneo, typically in areas close to water.

While their diet mainly consists of young vegetation and unripe fruit, they may also eat the occasional insect or small invertebrate. Due to their habitat in the tropical forests of Southeast Asia, proboscis monkeys are endangered with a declining population.

They are known to make various vocalisations and ‘honks‘, which help communicate their status in a group. They have special honks to infants for reassurance, as well as alarm calls for threats, or anger.

Although they spend most of their time in the treetops, they like to sleep on the thick branches growing over water. This provides them a quick escape if they were to come face to face with one of their many predators.

Proboscis monkeys know how to swim but won’t do so often – usually only when necessary, such as to cross a river or to escape from predators

1. Proboscis monkeys are only native to one place in the world

Proboscis monkeys are what is known as an endemic species, which means they’re only native to one area in the world. 1

For the proboscis monkey, they call a single island, Borneo, in Southeast Asia home, which just so happens to be the largest island in Asia – and the third-largest in the world!2 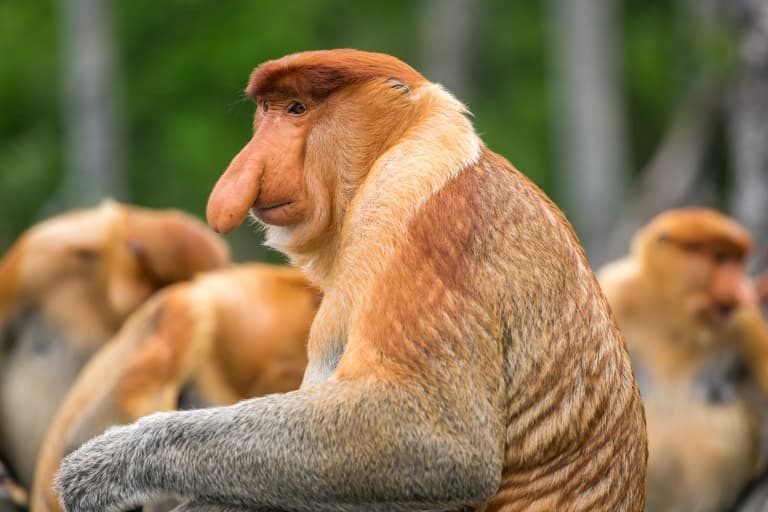 2. They are some of the best swimmers

While there are many primates known for their swimming skills, the proboscis monkey takes the cake. It makes sense that they’re some of the best swimmers in the primate family when you consider their home near freshwater. They can even swim underwater!

3. They have nine stomachs

There’s a reason that these large-nosed monkeys are known as the cows of the primate world!

Just like cattle, proboscis monkeys have a complex stomach with many chambers – although they aren’t technically ruminants. Each one of these stomachs is filled with healthy bacteria to help them digest their food. 3

4. Males and females have different noses

While proboscis monkeys may pick their friends, they don’t pick their noses. Males have long, thick noses, while females’ noses are smaller and more pointed, like a human.

This means that proboscis monkeys have what is known as sexual dimorphism (when males and females of a species look different). 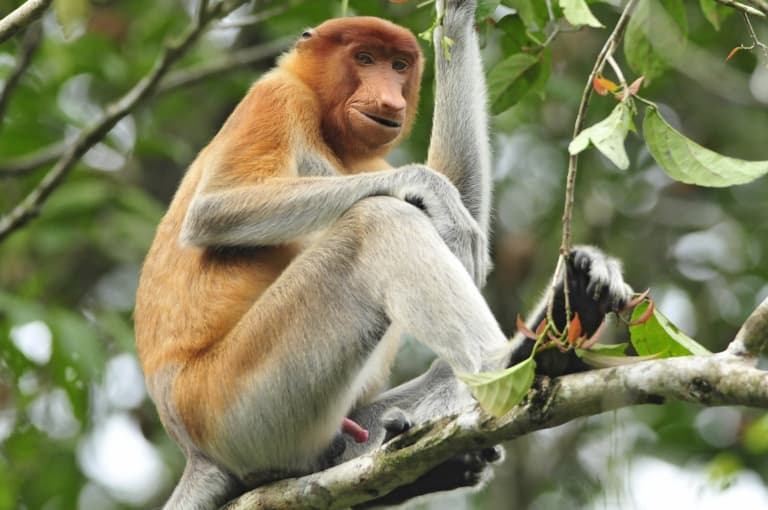 5. Proboscis monkeys change colors as they get older

While it may come as a surprise, baby proboscis monkeys (called infants, just like with humans!) don’t come out looking just like their parents. Not only are their noses smaller, but they also are a completely different color!

When these infants are first born, they tend to be a dark color, either dark brown or even black. However, as they mature, they develop their iconic red hue, with many developing other colors such as grey, blue, and orange as well.

6. Their tell-tale noses can be longer than 10 centimeters

There’s no doubt that these primates have some of the longest noses around. However, do you know just how long they can grow to be?

A male’s nose can grow to be as long as 10 centimeters – that’s nearly 4 inches long! For reference, that’s around the same size as a toilet paper roll.

7. Ripe fruit can be lethal!

While it may seem strange that only unripe fruit are a major part of the proboscis’ diet, it’s for a good reason. Ripe fruit has sugar in it that can be difficult for the monkey to digest and break down. When too much is consumed, it can lead to fatal bloating. 4

While their noses may look a little funny to us, they’re actually one of the ultimate factors in deciding whether or not a male will mate. Larger noses are associated with dominance in this species and louder calls, and so females are more likely to mate with males with longer noses. 5

They have a bright red penis and a perpetual erection, which is unique to this species. 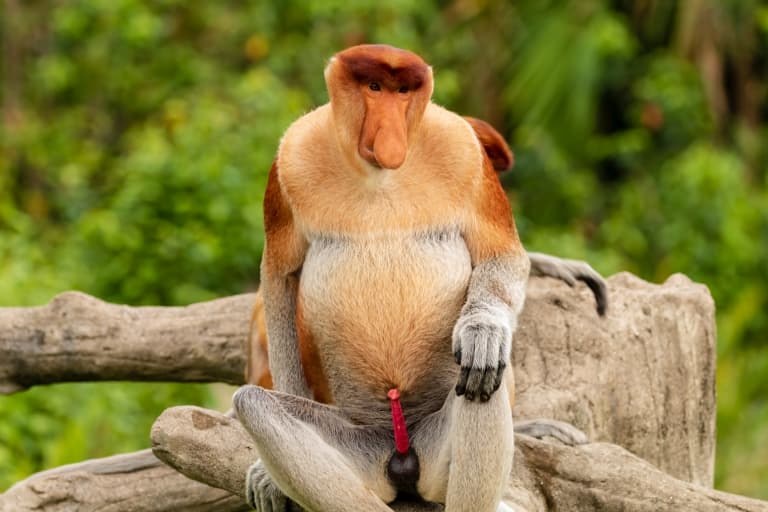 10. The proboscis monkey is an arboreal species

Despite being some of the best swimmers in the primate family, proboscis monkeys are an arboreal species. This means they spend most of their time living in the trees, only coming down when they absolutely have to. 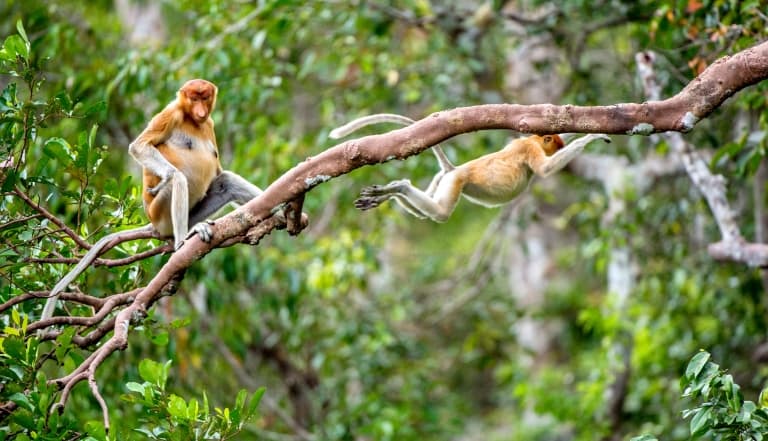 11. It’s illegal to keep them as pets

Many people like to keep different species of monkeys as pets where it is legal. However, due to special protections as a result of their endangered status, it’s illegal to own a proboscis monkey as a pet pretty much anywhere.

This is due to ongoing habitat loss from logging and oil palm plantations, as well as hunting in some regions which is considered a delicacy and used in traditional Chinese medicine.