Peacock spiders are a type of jumping spider that is most commonly found in southern Australia, though one species can also be found in China.

They belong to the genus Maratus, which is thought to contain 108 species in total. They are tiny spiders, often less than 4mm long and the size of a small grain of rice.

Most species’ males are known for the incredible, iridescent coloration on their abdomens, which they use to attract females through a unique courtship ‘dancing’ routine. 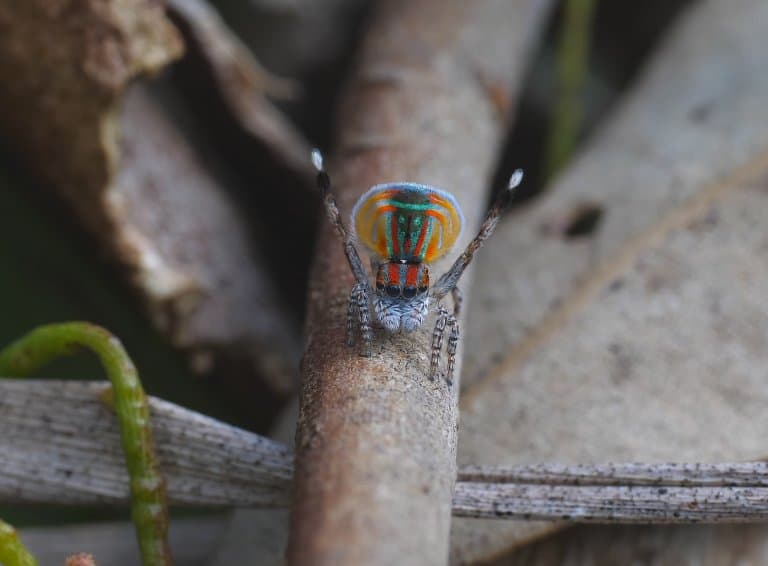 These miniature spiders reside in a variety of habitats, although some species are more particular about where they live than others. They prefer areas where there is leaf litter or grass to hide in but are also found on sand dunes and in semi-arid deserts.

Peacock spiders get their name from the beautiful colors that the males exhibit on their abdomen. Modified hairs on their bodies, form brightly colored, shiny scales in varying patterns and colors of blue, red, yellow, purple and orange.

The purpose of this unusual coloration is to attract females, which seem entranced by the bright patterns and dancing display of the males. However, the male might be eaten by the female he is trying to attract if they are unwilling to mate and continue to provoke them.

Despite their size, peacock spiders are excellent, and extremely agile, hunters. The have eight eyes which give them excellent vision as well as depth perception. Unsurprisingly they also have well developed colour vision and are able to distinguish between different shades much like many birds can.

As well as their eyesight, peacock spiders can jump tremendously far, sometimes over 40 times their body length. This allows them to pounce on insects, such as flies, moths and crickets before they fly or jump away and also makes them very difficult for predators to catch.

While peacock spiders are mostly solitary and are not found in large numbers in a single place, they do come together to mate. During this time, the female, who is coloured a shade of brown, leaves behind a silk line which is produced from her abdomen. Males are able to tell from chemicals in this silk line if the female is ready to mate. Usually by touching the silk line with his legs, the pair begin their mating ritual.

Peacock spiders are so small that studying their behaviour in the wild can be difficult. In fact, there were fewer than ten known species recorded prior to 2011. Over 100 species of peacock spider have been identified since their elaborate courtship dances and bright coloration became more well-known.

1. Males dance for their lives

Well, kinda. In order to mate, male peacock spiders will perform a ‘dance routine’ by showing off their peacock fan-like abdomen.

He usually chooses a suitable platform before beginning his dance, so as to give the best affects possible. Here, he expands and raises his abdomen so that it is facing the female.

He also waves his third legs into the air and performs his dance by drumming on the surface with his legs and performing intricate jumps and dance moves.

The background of his abdomen is usually a deep black colour and this makes the bright colours stand out, seeming incredibly bright. The vibrations he makes with his legs also attract females, who can be picky when it comes to choosing a mate.

If he is successful, the female will let him mate, but contrary to the video below they won’t always kill the males they don’t like. Females only mate once in their life, so will often ignore or jump away from males that don’t realise or care that they’ve already mated.

If the male does not get the message a female is unwilling to mate, then the female may then attack and feed on the male, particularly if it’s hungry. 1 2

If the female peacock spider is not interested in the male as they have already mated, she can attempt to kill and feed on him.

Even if successful in the dance routine, female peacock spiders do occasionally take part in sexual cannibalism, where they will eat them after copulation.

Often males will smartly jump away immediately after mating, though!

3. They get their name from their colourful abdomens

Much like a peacocks tail feathers, the male spider’s abdomen is used to attract females too. 3

4. They can jump over 40 times their body length

These spiders are incredibly agile and can jump the distance equivalent to a human jumping 70 metres.

5. Females are less colourful than males

Although females are usually brown in colour, they are also patterned to blend in with their surroundings. 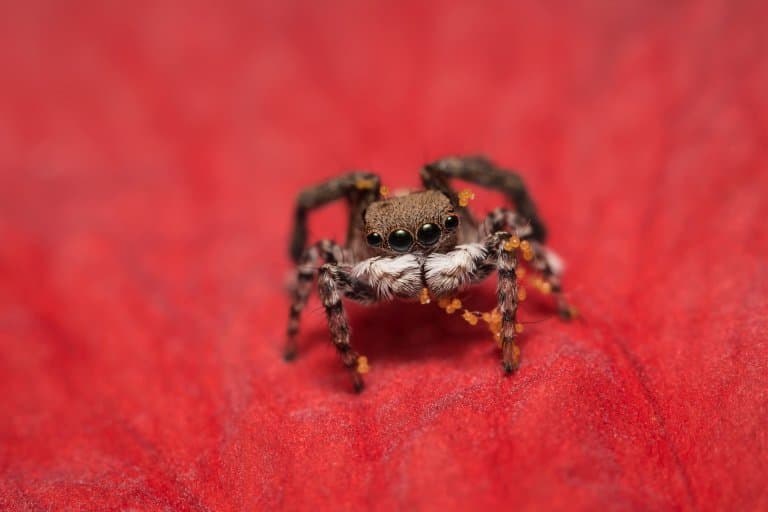 6. They are able to hunt prey much larger than themselves

Despite being so tiny, peacock spiders can kill insects as large as crickets.

7. They can see in UV light

Not only can they judge depth and distance very well, peacock spiders are also able to see the full spectrum of colours and see ultraviolet light. 4

Females will usually lay their eggs underground on in holes in old wood. They will guard them while covering them in silky thread.

Peacock spiders do not spin webs, but instead spend much of their times scurrying through the undergrowth in search of small insects to feed on.

They attack and kill prey a bit like a cat, by stalking them undetected before pouncing. Peacock spiders will eat most insects of suitable size that they come across.

10. Peacock spiders are found in a variety of habitats

Across Australia, peacock spiders can be found in many different habitats, including people’s gardens.

11.  Each species seems to have a unique dance

As there are over 100 species of peacock spider and even scientists find it difficult to tell the difference between certain species.

Sometimes this can be done by looking at the colourful patterns on the males but more often this is achieved by observing their mating dances.

It is thought that different species have developed their own unique dance displays, designed to only please females of the same species.

12. Peacock spiders are not dangerous to humans

Although they are venomous, this venom has no effect on humans. They also have such tiny jaws that they can’t even pierce human skin and have never been recorded biting a human.

They use their venom to kill their prey, such as small flies, moths, insects and other spiders. 5