The orangutan (Pongo) is an omnivorous mammal with shaggy orange fur and a unique facial structure. “Orangutan” in Malay means “person of the forest”.

These highly intelligent animals have been found using tools in the wild and creating deep bonds with their young. There are three species of orangutan—the Bornean, the Sumatran, and the Tapanuli. 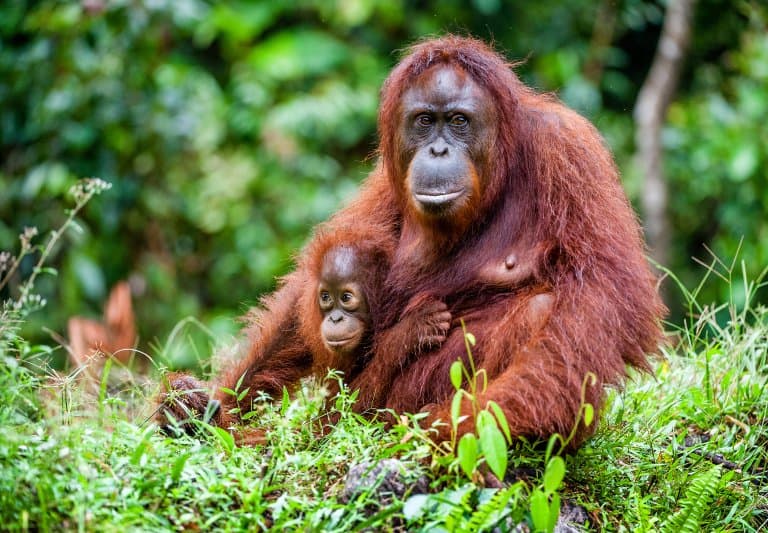 Orangutans are known as great apes, which are a family of primates including gorillas, chimpanzees and modern humans. They are native to rainforests of Indonesia and Malaysia, but are now only found in small regions of Borneo and Sumatra.

Orangutans have proportionally very long arms, and short legs with reddish orange hair. Males are larger than females, growing up to 4 ft 6 and weighing 165 lbs (75kg). The smaller female is typically under 4 ft in height and weigh around 80 lbs (37 kg).

They are considered solitary, but social animals that spend most of their time in trees. Orangutan are omnivores that will diet on fruit, vegetation, insects and birds eggs.

Highly dependent on trees for food and movement, deforestation has lead to a significant decrease in orangutan numbers – sadly, all three species are considered critically endangered. Poaching has also contributed to this reduction.

It is estimated that over the past 75 years, there has been an elimination of over 80 percent in the Sumatran orangutan species. 1

1. Their arms are almost two times longer than their legs

Adult orangutans have an arm span of almost 2.2 m (about 7 feet). Their extensive reach is perfect from swinging from branch to branch and reaching for hard-to-reach fruits.

When they stand up on their legs, their hands practically graze the ground. 2 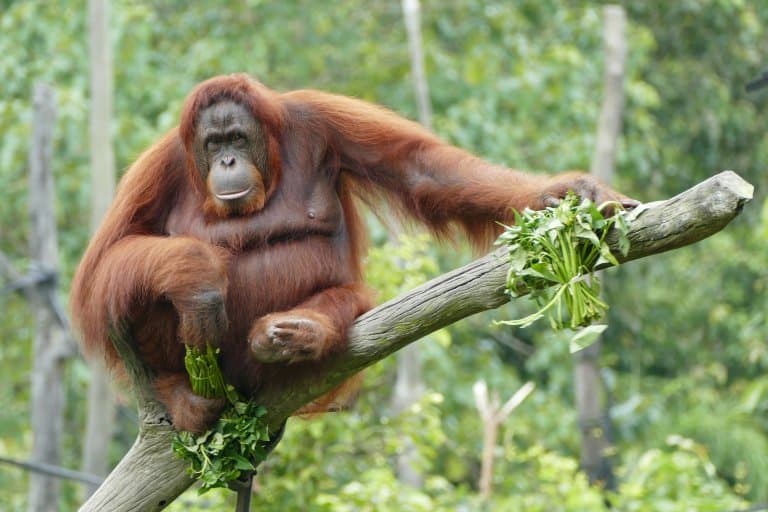 2. Their throat sacs are used to communicate with other orangutans

Both female and male orangutans have throat sacs. The throat sacs of males will grow as they reach sexual maturity. These sacs help produce booming “long calls” that can be heard over a mile away.

They have a dual function—to scare of competing males and to attract potential mates. 3

3. They are the largest tree-dwelling animal

In general, orangutans spend the majority (more than 90 percent) of their waking hours up in trees.

Adult males can weigh more than twice that of females. 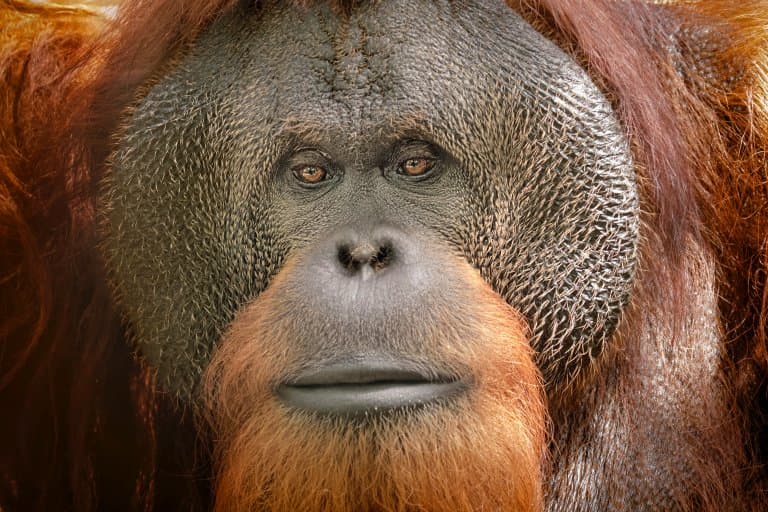 There are two stages of sexual maturity for male orangutans—a subadult stage followed by an adult stage.

As they transition from the subadult to the adult, males develop the characteristic cheek pads, and their throat sacs get larger. Subadults also usually do not produce long calls.

5. Their feet double as hands

With opposable big toes, orangutans can grasp branches, fruits, and much more with their feet.

They closely resemble an extra set of hands. 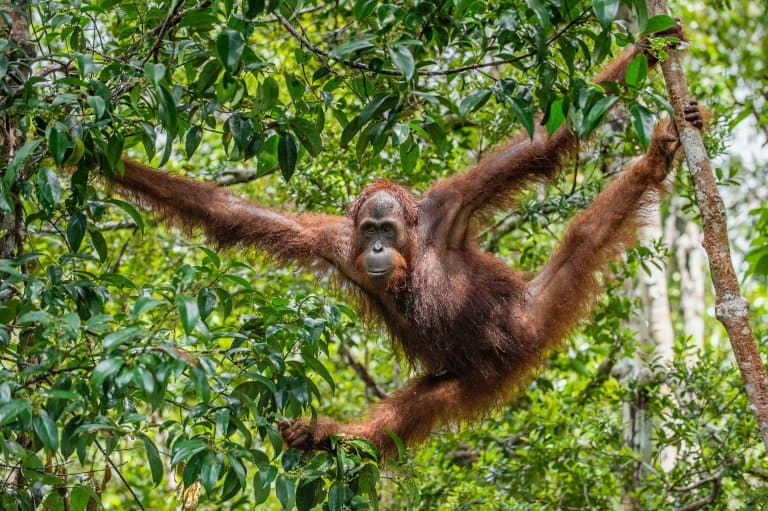 6. They are one of the closest relatives to humans

Following the chimp and the rhesus macaque, orangutans got their full genome sequenced. 4

7. Orangutans stay with their mothers for many years before venturing out on their own

Mothers have been observed staying with their young for up to eight years. During this time, the young learn how to forage for food, use tools, and efficiently navigate their surroundings.

8. They sleep in beds

At night, orangutans will make nests that function like mattresses up in trees.

These “beds” are formed using a combination of leaves and twigs. They will also sometimes make roof-like structures to help keep themselves dry during rainstorms.

9. Fruits make up a large part of their food

There are hundreds of fruits available in their habitats. Orangutans have also been found munching on bark, insects, flowers, and, at times, even meat.

10. They only give birth once every seven or eight years

This is the longest period that has been documented among any land-dwelling animal.

It is likely due to the length of time young stay with their mothers before becoming independent.

11. Different species will spend varying amounts of time on the ground

Sumatran orangutans spend almost all of their time up in trees with males descending to the ground more often than females.

Bornean orangutans, on the other hand, spend more time on the forest floor.

12. Relative to other apes, they are less social

Chimpanzees and gorillas are known for their intricate social structures and hierarchies.

In contrast, orangutans are relatively solitary animals. Young will stay with their mothers, but adult males tend to live alone.

13. Males can get quite aggressive towards each other

Males reach maturity around 15 years. When another male is found wandering into their territory, they will often engage in vocal confrontations that can escalate into physical fights.

They will charge and bite each other until a victor is determined.

15. Orangutan are the only great ape found in Asia

Gorillas, chimpanzees, orangutans, and humans are all considered great apes.

Orangutans are the only great ape to originate from Asia. Gorillas and chimpanzees all come from Africa.

The Tapanuli species was discovered in 2017.

It is estimated there are approximately 800 animals belonging to this species living in Northern Sumatra.

17. They are considered one of the most intelligent primates

Orangutans have been observed using tools to help forage for food, cross rivers, and even use leaves against their mouth to help amplify the noises they can make to intimidate rivals.

Various studies and experiments show that they cooperate with each other, play games and that an adult organutan had self awareness in a mirror test.