Off the coast of Nicaragua, at the verge of the aphotic zone, is a jet-black stalker, able to use a special light to blend into the mild blue fog of the remnants of day.

This stealthy hunter uses a peculiar camouflage to hunt in the dark without being seen, and until recently, has remained right under our noses without being spotted.

The Ninja Lanternshark is a new species of deep-sea predator, discovered by an expedition in 2015 by a researcher at the Smithsonian Tropical Research Institute. 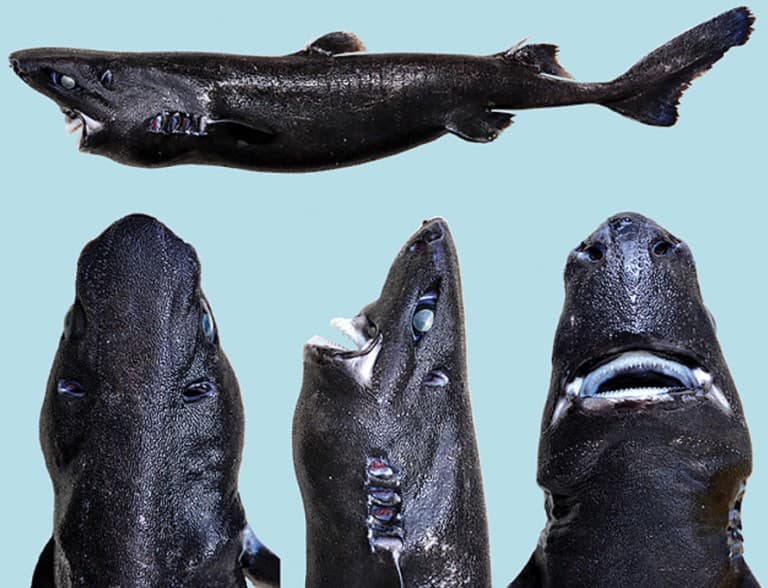 This shark sounds like it was named by 8-year-olds, and it was.

Originally dubbed the “Super Ninja Lantern Shark” by the nephews of the researcher who discovered it, this glowing, deep-sea mystery still leaves a lot of questions unanswered.

One thing we can guess is that it uses a creepy form of camouflage to blend into the background, lending credence to the assumption that it’s a stealthy ambush predator.

These fish have large nasal passages and unique, protective scales all over their bodies, yet already one animal has been found feeding on them.

Here’s the little we know about the (Super) Ninja Lantern Shark.

1. Their faces are covered in teeth

In fact, like all sharks, their entire bodies are covered in placoid scales or dermal denticles. The arrangement of these denticles is one of the ways researchers can tell these sharks from other species of lantern shark, and in this case, they’re moderately short, slender, hook-like and conical.

This shark has them in dense concentrations around their eyes, which is one of the defining characteristics of the species.

These denticles have an inner core of pulp, just like our teeth, and are vascular, and covered in dentine. Dermal denticles are truly modified teeth, and as such, they’re covered in an outer layer of hard enamel.

They’re used for protection, and the arrangement also lends a quality of hydrodynamics to the skin of the animal too. Some research also suggests that they have some incredible abilities to resist the attachment mechanisms of algae and parasites.

The unique qualities of shark skin have also led to research into antimicrobial surfaces and more efficient swimming suits.

2. They’re part of a large and elusive family

The Etmopteridae family of lantern sharks is the most diverse in the shark world.

There are over fifty species in this family, and probably more that have yet to be discovered. These sharks live secretly in the deep and they’re quite small, so samples are few and far between.

Most old specimens have been stored in ways that have degraded their DNA, so we still have plenty to find out about their phylogeny.

The ninja lantern shark is one of the most recent discoveries and was described from only eight specimens. 1

3. They glow blue, without help from the devil molecule

There’s a lot of glowing that goes on in the deep. Since there aren’t any functioning lightbulbs and the sun can’t make it that far, animals have learned to produce their own light.

Many of the bony fishes use a chemical called luciferin, which, when reacting with its corresponding enzyme luciferase, releases light.

Lantern sharks also glow in the blackness, but they use a closely-related molecule called coelenterazine, something which is commonly found in jellyfish and squid.

It’s thought that the sharks acquire the compound from the prey items they eat, and can even be passed down into embryos from the mother.

These sharks occupy the twilight depths of the ocean. At this deep, all but the tiniest flickers of blue light penetrate the murkiness. The faint glow that the ninjas can produce is thought to mimic the most distant blue light, creating a vision that matches the light from above, rendering them invisible to their prey. 2

Or at least, the man who created Jaws. Peter Benchley, the writer of Jaws, was an avid shark conservationist. After witnessing the impact his negative portrayal of these fish had on the general public, he became compelled to get involved in shark conservation, and in 2015, when the Ninja lantern shark was discovered, head researcher Vicki Vásquez named it in his honour: Etmopterus benchleyi.

Perhaps even cooler than this, the uniform black colouration, presumed camouflage-utility of its reduced photophores, and general stealthy, deep-sea nature led the researcher to call it the Ninja lantern shark.

Since these Ninjas have hidden away until very recently, there isn’t much we can possibly infer from them yet. One thing that has been discovered is a type of barnacle, Anelasma squalicola, which parasitises the shark, as was seen in a 2021 paper in which a benchleyi shark was found with two such barnacles embedded in its neck.

This barnacle is known to predate upon at least eleven other known species of shark, and though it seems to have no measurable impact on the health of the host, it may slow down the rate at which they can reach sexual maturity.

This discovery also represents a new size record for the species, at around 53cm long, blowing the previous record out of the water by an entire centimetre. 3

6. There will be plenty more to find out

This shark was only discovered in 2015, leaving researchers very little time to establish anything concrete about what it does and where it goes. However, specimens will be sitting on museum shelves around the world, and new ones will be caught in nets of fishing vessels all the time.

It’s too early to make many assumptions about this mystery fish, but now that it’s been described (and now that it has a really cool name) expect plenty more research to pop up relating to it!