When you think of the characteristics of wasps, you probably think of a eusocial colony of paper nest-builders; aggressive defenders of their young and great fans of picnics. What you may overlook is that the majority of species – that is, well over 99% – are solitary hunters.

The vast majority of these are parasitoids; a sort of parasite that kills its host. In fact, most insect parasitoids are wasps, such is the enormous distribution and prevalence of these highly-specialised animals.

Within this group of parasitoid wasps, some build neat little bungalows out of mud. These wasps are called mud daubers, or sometimes mud wasp or dirt dauber. 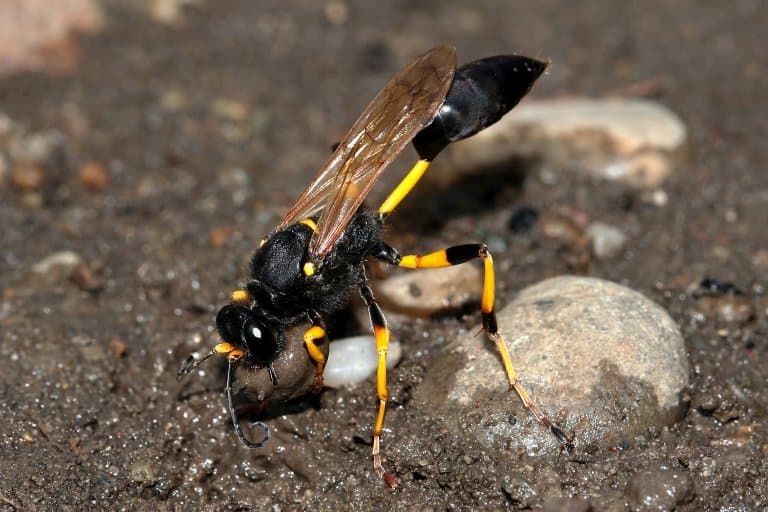 There are over 30 species of daubers, some of which include the Blue Mud Dauber, Black and Yellow Mud Dauber, and the Organ-Pipe Mud Dauber.

They are parasitoids that capture and paralyze small colouful spiders, which are served as food for their young to consume in their nests. Adult mud daubers also like to diet on flower nectar.

They can often be heard singing to themselves while working, preparing a nice shelter for their young out of some very special saliva, and an unusual technique.

They have their enemies, but they generally leave people alone, and can even cohabit without incident.

The name comes from the little sealed, chambered capsules they create to house their larvae. These pods come in all shapes and sizes, varying from scruffy-looking mounds to intricate systems of tubes or huts.

They gather up mud from the surrounding area and make a sort of mortar by mixing it with their saliva. They then create their homes in layers, repetitively tapping the mud to compress and strengthen it. This process usually takes less than a day, and once it’s finished, the wasp sets to work filling it up.

Their saliva itself is interesting; it contributes to the strength and reduced weight of the structure too. When tested, it was shown to contain numerous components including iron, phosphorus, calcium, magnesium and aluminium. 1 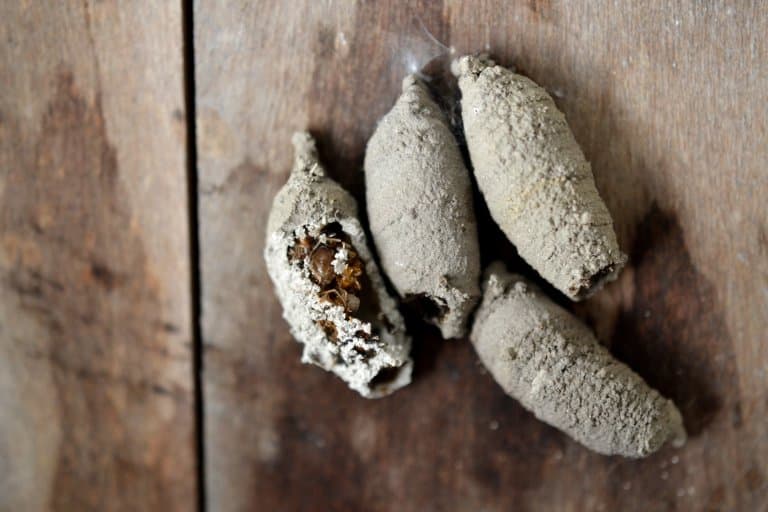 2. They are distinct from potter wasps

While mud daubers and potter wasps both make mud structures, the latter is responsible for the cute little miniature clay jugs that you may have seen stuck to walls or under tables outside.

These are vespids, a solitary cousin of the notorious black and yellow paper wasps (that you’re encouraged to develop an overblown and irrational fear of as a child), and are a different lineage.

Mud daubers come from either the family Specidae or Crabronidae, both of which are exceptionally diverse families with mud daubers representing only a portion of the lineage. As such, the taxonomy of these wasps is a bit untidy, and their name refers more to a behaviour than a taxonomic clade.

While many mud daubers make balls or shelters, or other simple mud structures, others are more detailed and meticulous.

The organ pipe mud dauber constructs elongated tubes, inside which their eggs are laid.

The pipes of this organ are either placed beside one another, or on top of one another, and can be stacked to resemble a church organ.

4. They are spider hunters

The mud dauber makes these nests for a good reason. Each one is filled with chambers, in which it will lay an egg, and for its offspring to feed when it hatches, it will provide a generous meal alongside the egg.

In most species, this meal consists of lots and lots of paralysed spiders. Up to 25 of them.

Some species focus on one or two species of spider, others are a little more general, but almost all will hunt for succulent, juvenile spiders, usually either orb weavers or crab spiders, to envenomate and paralyze, before lumbering back to the nest to imprison them inside the mud walls until the hungry larvae emerge.

After emerging, a female adult wasp will almost immediately set to work building her own nest. 2 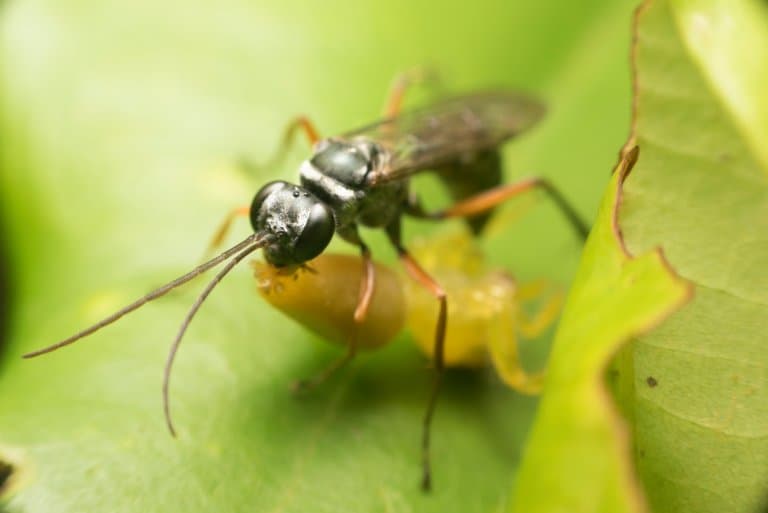 A single individual of the mud dauber Sceliphron caementarium was blamed for the death of an entire crew and passengers of a 757 jet in 1996. In this case, the wasp built a nest in the pilot tube of the aircraft, causing faulty readings and leading the pilots to crash the plane.

While mud daubers can give you a painful sting if you deliberately bother them, they’re generally very docile and mind their own business; commonly sharing proximal space with people without incident.

They’re considered harmless, and in many cases beneficial, since some species help remove black widows from the area. 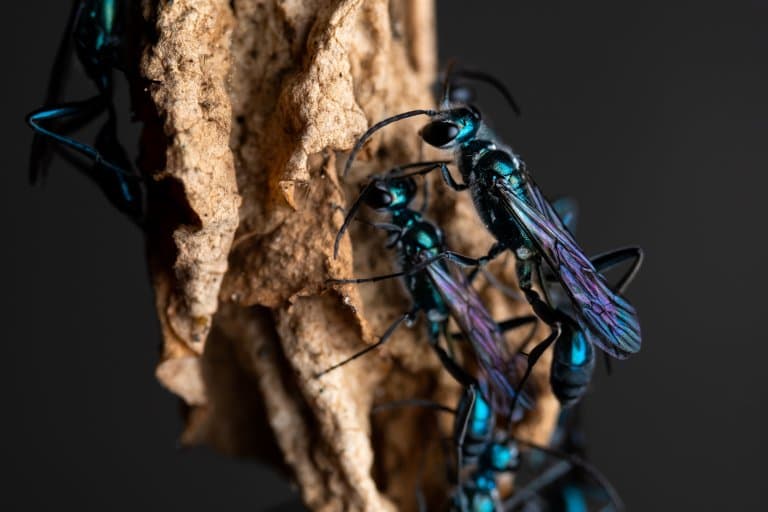 6. They make a really weird noise when they build their nest

Some people hum when they’re concentrating on their work, and mud daubers do something very similar. Somewhere between a whine and a buzz, the sound they make when both digging and building their nest raises an obvious question, and in 2007, researchers filmed this process with high-speed video and some tools they salvaged from a crashed UFO called laser Doppler vibrometers.

These awesome tools allow you to measure vibrations without actually touching the surface, and were precise enough to establish that the mud dauber was modulating the vibration of its head by buzzing its wing muscles to create a sort of hammer-drill effect while digging.

When nest building, it reduced this frequency, creating a vibration that presumably knocks air pockets out of their cement and stiffens the mixture.

7. They are vulnerable to parasitism

As parasitoid wasps, there’s some delicious irony in the fact that mud dauber nests are often the site of parasitism themselves. Stunning, metallic-looking Cuckoo wasps, among others, enter these nests before they’ve been sealed off and sneak an egg or two inside.

This egg will hatch, and make use of all the fresh food that’s lying around, and the cuckoo wasp doesn’t have to go to the trouble of hunting or building a nest.

In some places, mud daubers have been seen visiting worm casts to collect their building materials.

The fine-grained nature of these may act as a pre-cleaned source of mud.

Typically, the wasps will spend time removing plant and stone chunks from the earth before bringing it back to use, so finding a supply of pre-cleaned mud must be a great time-saver, even if it did come out of a worm’s butt. 3 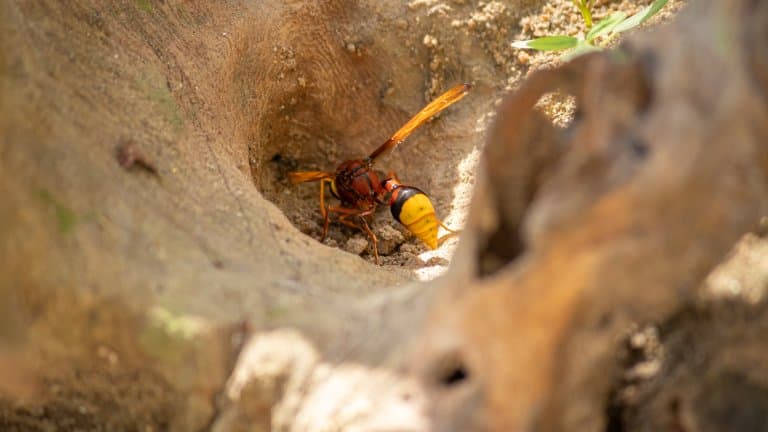