In the craggy shallows of the rocky reefs in temperate and tropical waters, there might be lurking an animal so grotesque that it can only come out at night.

This slimy serpent-like creature has rows of glassy shards in jutting jaws, bulging, beady eyes, and a miserable temperament.

This is the moray eel, and it could be one of over 200 species around the world. 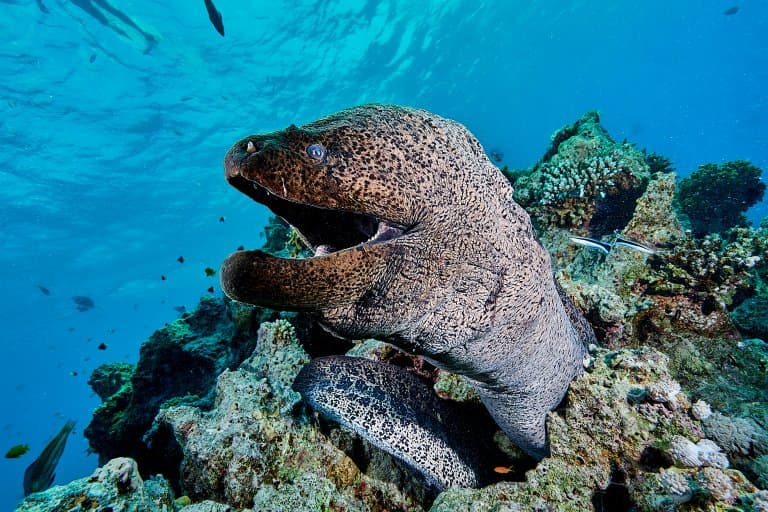 This is one ugly fish. And yet, in many ways, it’s a stunningly colourful and enigmatic addition to the reef. Morays are some of the strangest fish you’ll see in the shallows, and they have a strange charm to them, despite being altogether disgusting to describe.

There are currently 202 known species of Moray Eel, which come in a range of colours, shapes and sizes and display some very cool adaptations to their rough and rocky environments.

The majority of species are nocturnal and found in saltwater, often in temperate and tropical waters near reefs, where they shelter in dead coral and rock patches. However, some species also live in brackish and fresh water.

Moray Eels are opportunistic carnivores and like to diet primarily on smaller fish, crabs, and octopuses. Some species, such as the zebra moray and snowflake moray have specialized blunt grinding teeth, that allow them to eat hard shelled creatures, such as crabs, clams and mollusks.

Though snake-like, morays, and eels in general, are a type of bony fish, in the class of Actinopterygii, along with 99% of all fish species, in the order Anguilliformes; so called because they look like eels.

This confusing, circular logic may be evidence that they were named by the same person who discovered the colour orange on a fruit tree in Asia. 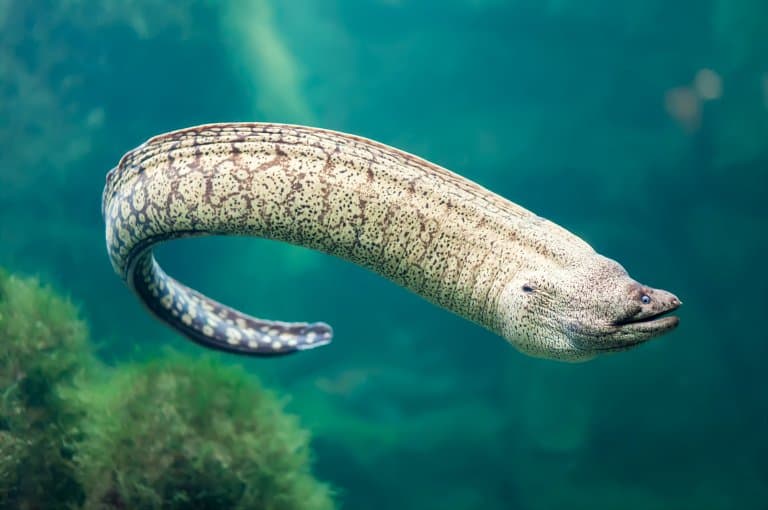 2. Morays have two pairs of jaws

Pharyngeal jaws are second set of smaller jaws located in the throat of the moray eel, behind the normal jaws in the mouth, complete with tiny teeth.

This set of jaws gets launched into the mouth cavity during feeding, where it can grasp onto food, and pull it into the throat to swallow.

Morays are unique in using their pharyngeal jaws to actively capture and restrain prey in this way.

3. Some of them are bastards

The banana eel, Gymnothorax miliaris is known to be a particularly aggressive species. So much so, that its less-affectionate nickname is the Bastard eel.

Captive animals must be housed with tankmates who can stand up for themselves so that hobbyists and researchers don’t lose their collection to these grumpy fish.

A moray will often eat anything small enough to fit in its mouth, and is capable of taking a chunk out of bigger fish too! 1

4. Morays don’t have any scales

Despite being fish, eels are a peculiar lot. They have a dorsal fin that runs the entire length of their backs, which makes them look sort of punky, and they have a spongy, sluggy texture from their lack of scales.

They also move a lot more like snakes than fish, but generally prefer to stay in cracks and crevices in rocky shallows. 2 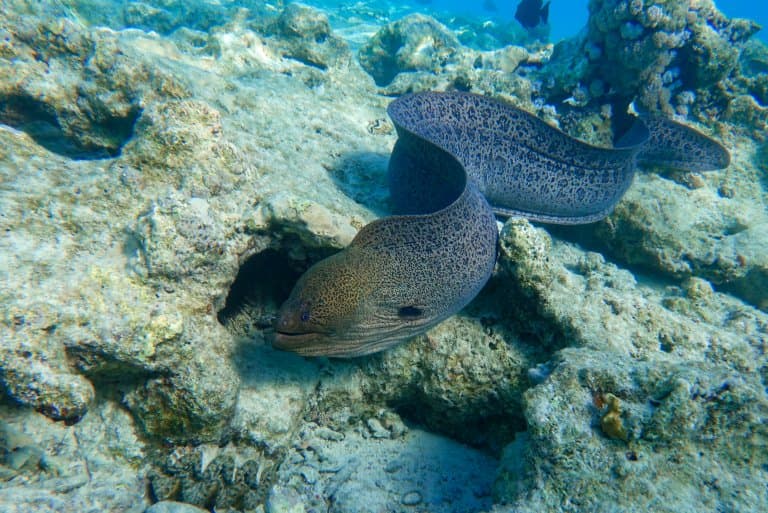 To top it off, these fish are covered in a thick mucous layer. Believe it or not, mucous serves a very strong purpose in nature, typically providing a protective barrier over otherwise vulnerable layers of skin.

Your stomach should have a thick mucous layer to protect it from the acids inside, and similarly, a fish without scales can make good use of this snotty, slimy substance to keep it safe from toxins and physical damage as it occupies its rocky habitat.

The green moray eel is actually brown under all the snot; it’s just covered in a thick green layer of mucous. In some species, this mucous is even toxic, making them a particularly nasty prey item. 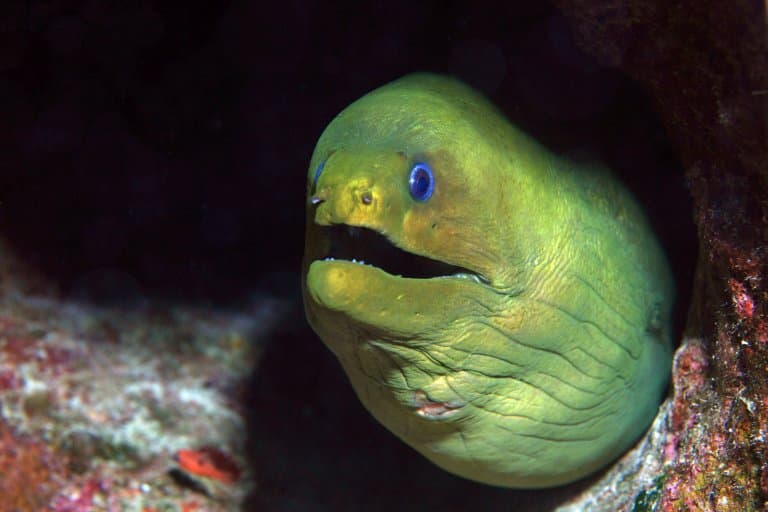 Despite some being somewhat toxic, they sometimes quite enjoy a cuddle with the right diver and have been known to behave in what appears to be an affectionate manner when stroked, tickled or caressed.

Morays have a keen sense of smell to make up for this and rely primarily on chemoreception such as smells and tastes to navigate their world.

Some morays have large and vivid eyes; the white-eyed moray eel has a permanent fearful expression with wide, bright eyes; despite this, they still have terrible eyesight.

This probably isn’t such a handicap for a blind, snot-covered bastard, as you’d expect them to be shunted pretty much continuously during the daytime.

This also helps them stay hidden from the few predators brave or stupid enough to try and eat them.

9. They can change colours

Some, like the banded moray eel Gymnothorax rueppelliae, and the Leaf-nosed moray Rhinomuraena quaesita have been known to change colour, either as means of camouflage or in response to another strange behaviour… 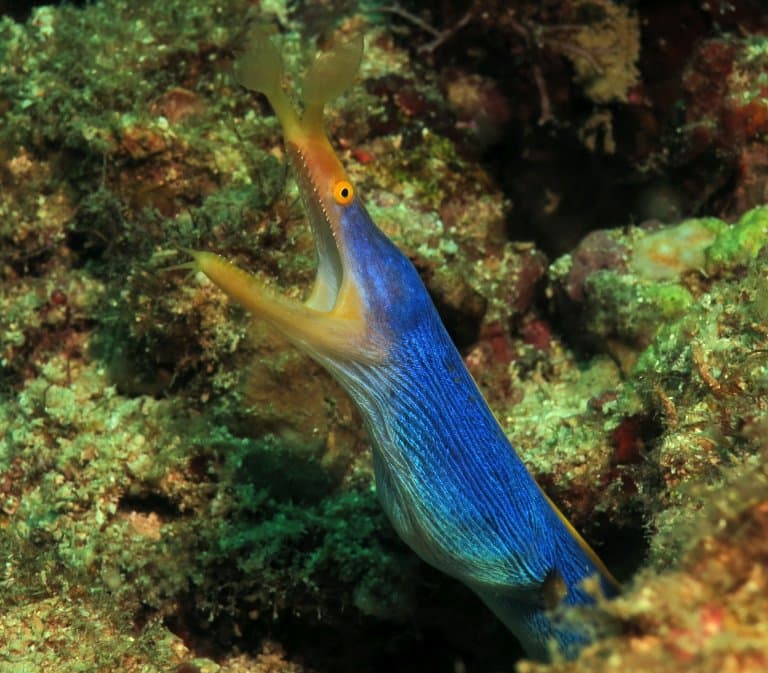 The leaf-nosed moray eel can change from a vibrant blue-yellow, to a green-yellow!

10. They can change their sex!

The leaf-nosed moray is thought to be able to change sex as it grows. Born male, they transition as they age, switching to female later in life. This transformation determines them as “sequential hermaphrodites”, allowing the eel to live its life with the best of both worlds.

Reproduction results in around 10,000 eggs at a time, and when the larvae are hatched, the eels are fully translucent, but reaching sexual maturity, the males become blue with yellow, and as they become female, they change to fully yellow.

11. They come in a variety of sizes

A huge moray eel in Indonesia has been witnessed feeding on sharks!

Roving coral groupers have been witnessed recruiting giant moray eels when hunting with an invitation initiated by head-shaking.

This form of hunting may allow morays to flush prey from niches not accessible to groupers.

13. They can tie themselves in a knot

While strings, ropes and shoelaces are well known for this, it’s quite unusual for an animal. The moray can form a true knot with its body, that it uses as leverage to pull on prey items like slippery fish.

They can also use this method to create strong pressure to break food items into smaller pieces. It’s thought that the skill is passed on between individuals.

Though it hasn’t been officially recorded, this ability could act as an effective defence too. Hagfish are known to tie themselves in knots, and this motion acts not only as leverage for additional strength, but to scrape off defensive mucous in order to escape a difficult situation. 3

14. Moray Eels can give food poisoning

The giant moray and yellow-edged moray accumlate high levels of ciguatoxins, which can give humans ciguatera fish poisoning (CFP) if eaten.

Symptoms are varied, but can include diarrhea, vomiting, dizziness, and weakness. Moray Eels therefore are not recommend for consumption.