If Bambi can be believed, a deer begins as an adorable little spotted fawn with doe eyes, sitting sweetly among the flowers.

They’re friendly with skunks and rabbits, and they sneeze cutely and grow up to become majestic princes of the forest.

It’s a moose’s job to dispel all of that nonsense immediately. They are the largest and heaviest living species in the deer family.

Moose are incredible all-terrain monsters who live mostly alone in forests in the colder regions of the Northern hemisphere and tend to keep to themselves. Most moose currently inhabit Canada, Alaska, Northern USA, Poland, Kazakhstan, Russia and other Baltic regions.

Moose are browsing herbivores like giraffes, that eat select vegetation, plants and fruit. As much as half their diet consists of aquatic plants, like pondweed or lilies, which have more salt.

They are solitary creatures, although cows and calfs do form strong bonds until around 18 months, where the calf will go alone when their mother breeds again.

When riled up on booze or moose hormones, they can get particularly dangerous, and if you happen to be too close, there isn’t much you can do to escape one.

Fortunately, moose attacks are uncommon, and these animals, as ugly as they may be, also carry some grace and majesty, particularly in the colossal antlers sported by the males during rutting season.

Globally, they’re doing alright, but certain populations are struggling, and many are faced with a bit of an identity crisis within the Anglosphere.

In Europe, Moose (Alces alces) were always known as Elk. This was totally fine until the Europeans invaded and colonised North America, finding two massive deer species there. They named one ‘Elk’ and kept the indigenous name ‘moos’ for the other.

Unfortunately, they got it the wrong way around, and the moose was what they’d call elk back home.

The North American elk was something entirely other (Cervus canadensis).

If this is confusing, you’re not alone. By 1775, this mistake had led to fierce confrontations between the crown and the colonies, with Patrick Henry famously bellowing the inspirational line, “Give me moose, or give me death!”.

These ultimately boiled over into a long war after which the USA became one moose nation under God. So, what do you call it?

Well, if you’re loyal to King George, you can reliably call it an elk; if you’re a filthy revolutionary, you can’t. If you’re (understandably) not sure where you stand on 18th-century politics, just stick with moose to be safe. But enough revisionist history, let’s get back to the giant deer. 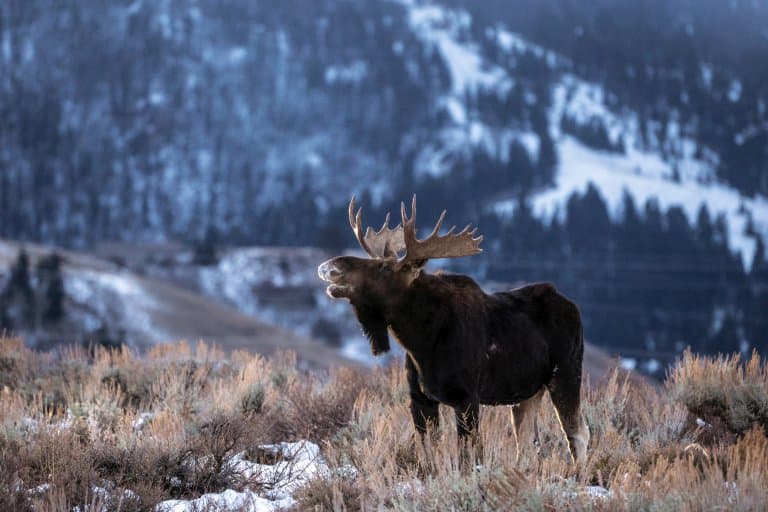 2. Moose are twice the size of elk

Despite appearing to be the mythical lovechild of a horse, a hippo and a cow, moose are in the deer family Cervidae, making them gargantuan relatives of the cute little muntjac (and Bambi).

To tell them apart from the American elk, you can look at their antlers. Moose have flattened, ‘palmate’ antlers so named because they resemble the palm of your hand.

Cervus canadensis resembles a giant red deer, with the narrower, classic antlers you’d find over the fireplace in an old pub in Scotland.

They’re both very big, but moose are almost twice the size.

3. They have special noses

Moose also have big, bulbous noses, which is nothing to tease them about, but can be quite distinctive at a distance, especially if they’re females or males who have shed their antlers.

This extended nose contains an advanced olfactory system that allows it to find water across large ranges and is well adapted to feeding from inside that water, as it can be closed while the animal submerges its face to get food. 1 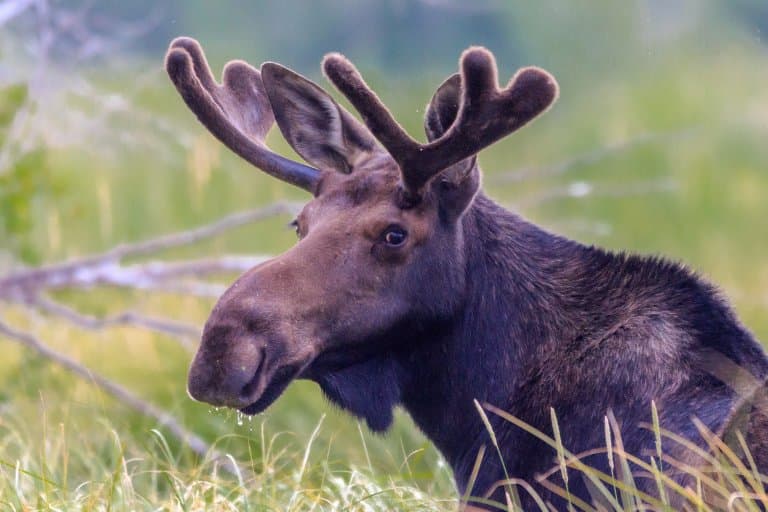 One easy way to tell an adult moose is by its size. They’re frighteningly big, both tall and heavy.

To put this in perspective, the second-largest deer species is C. canadensis, the American Elk, the males of which average around half of the largest moose in weight. 2

5. They can be the most dangerous animals around

Moose are typically elusive and shy animals, but there are times of the year when they’re particularly hormonal and can be very aggressive.

Just as you would if you were pumped full of moose testosterone, bull moose will often attack anything that moves during mating season, and a female moose protecting her calf is equally dangerous.

Statistically they attack more humans than bears and wolves combined. However, usually these attacks are not nearly as serious. 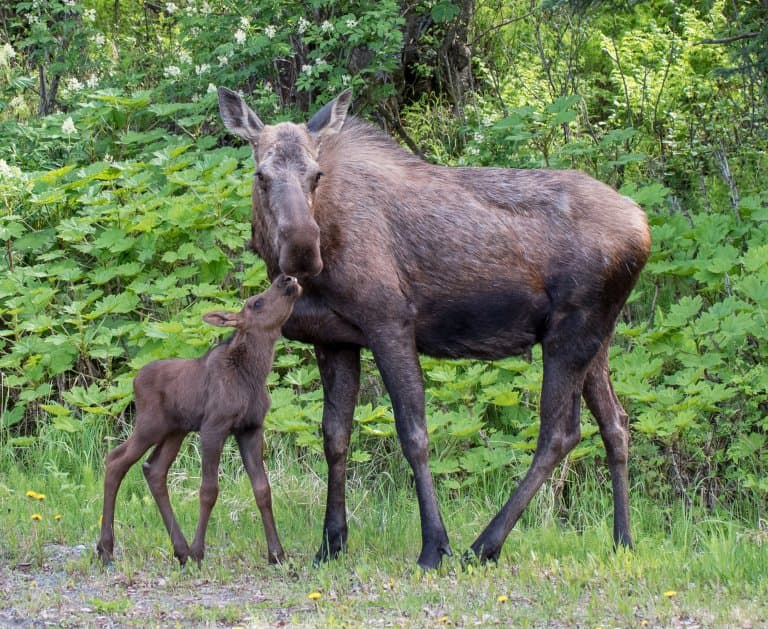 At certain other times of the year, moose feast on falling apples and other fruit slowly fermenting on the ground.

The trace amounts of alcohol can sometimes send them a bit loopy, and, much like the English on their way home from a bar, they have been known to attack trees and other inanimate objects after a good night out. 3

7. They have a prehensile upper lip

Moose can use their prehensile upper lip for grabbing and stripping branches where they can stand on their hind legs to reach them, or pulling up plants from the ground to feed directly into their mouths.

They have a tough tongue and flat molars, which also aid them in eating vegetation. Their 4 stomachs help digest this food. 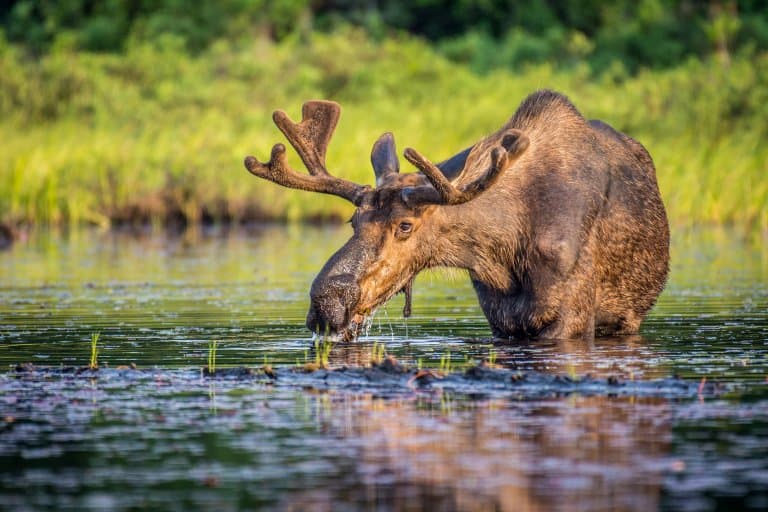 8. They can run, really, really fast

Moose are much more agile and speedy than they look. Their enormous bulk sits atop four spindly legs that can generate huge force both through water and snow.

They can do this whether in shallow water or a meter of snow, across almost any terrain.

This is the distinctive hanging ‘bell’ or dangling fold of skin, that you can see from their neck under their chin on both males and females.

Its true purpose is a mystery, however researchers believe it’s to help with thermoregulation. Other theories suggest it’s a fitness signal to help with mating selection.

And if you thought you were safe in the water, you’re not. Michael Phelps hit swimming speeds of 4.7 Mph in perfect conditions, once. Unconfirmed claims of moose swim speeds of around 9.7 kmph (6mph) are common, and they can certainly swim for a lot longer than a person.

Thankfully, they can’t fly. But then again, you probably can’t either. 4

11. Size counts in the moose world

Female ‘cows’ select mates based upon the size of the male antlers, which reflect their ‘health’ – as their size and growth is determined by age and diet.

Males will use their huge antlers to spar with rival bulls over cows for breeding during rutting and mating, which occurs in September and October.

During mating, bulls will make heavy grunting sounds that can be heard 500m away. 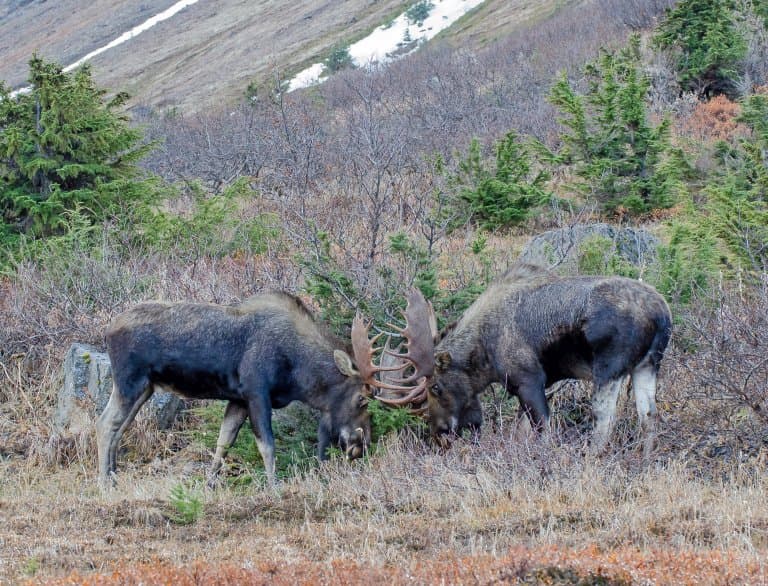 At the end of the mating season, males will shed their antlers – which will fall from their heads. This helps them conserve energy for the winter ahead.

The heaviest antlers recorded weighed as much as 36 kg! A new set of antlers will then regrow over 3-4 months for the spring and mating season later in the year.

Despite global populations rising, and of Least Concern from the IUCN, in some places, moose populations aren’t doing so well. Moose in Nova Scotia, for example, have been declared endangered.

This population decline is attributed to several factors, including climate change, habitat reduction and fragmentation, and poaching. However, the moose is a resilient generalist herbivore and can survive in a range of environments. With a little help to reduce its threats, populations have a lot of capacity to bounce back.

One threat to moose populations is a brain worm that’s transmitted from other deer species. Climate change is allowing warmer-weather deer species to move farther North, overlapping their territories with the moose, and bringing their contagions with them.

This is one of the more subtle effects of a warming world, and there may be many unexpected threats in the pipeline. 5 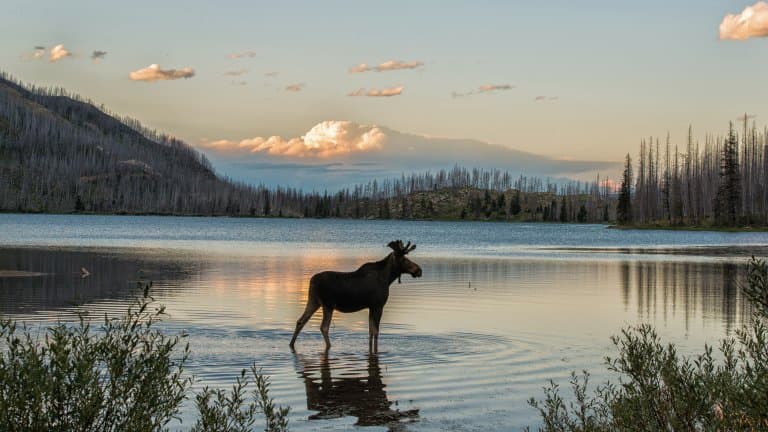