You’ll be very lucky if you see one of these diggers outside of its burrow, but if you stand within half a mile of one you’ll probably be able to identify it. These insects spend most of their lives underground but let out a tremendous droning call that can go on for up to an hour.

Depending on the culture, you may be told they’re a pest, an omen or a delicacy. These are mole crickets, with shovel-like fore limbs – they’re one of the loudest insects on earth. 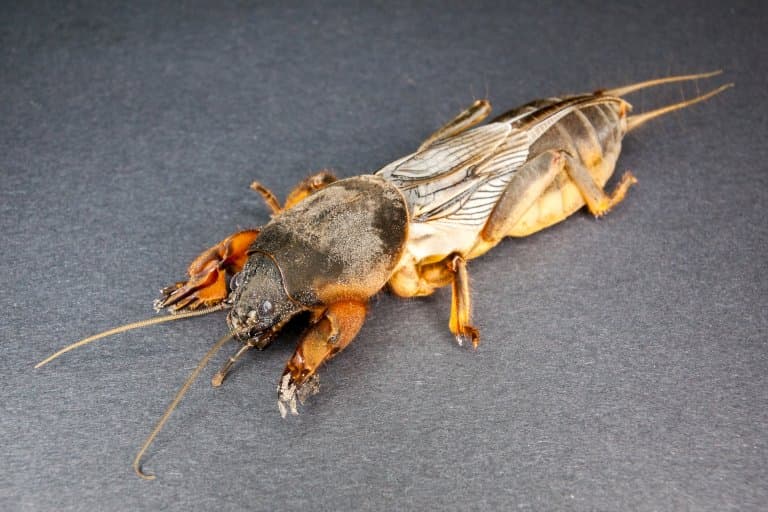 Mole crickets are related to other crickets and grasshoppers, in the order Orthoptera. However, they’re not true crickets and occupy a separate family called Gryllotalpidae. If you’re a taxonomy nerd too, you may recognise the prefix Gryllo relates to the true crickets, and the Talpidae is the family that makes up the moles.

These cousins of true crickets are so named after their enormous digging forelimbs and the habit they have of burrowing under farmers’ land.

While relatively common and present in every continent other than Antarctica, because they are nocturnal and spend their lives underground – they are rarely seen. They like to live in agricultural fields and grassy areas.

There are over 107 mole cricket species which vary in size and appearance, but are usually between 3-3.5 cm (1.2 – 1.5 inches) in length. They don’t have the same enlarged hind legs of true crickets for jumping, and have long antennae for sensing their environment.

Some mole cricket species are herbivores that diet on roots, grasses and leaves, while others are omnivorous, eating worms and grubs.

They’re popular among early naturalist researchers, and they have a variety of folklore and superstition associated with them from all over the world.

Mole crickets spend almost all their time underground. Their burrows have vertical and horizontal galleries that sit under the soil, and from the moment of hatching, the crickets begin tunnelling.

These crickets dig with enormous and powerful front legs that resemble the feet of a mole. These appendages make them immediately recognisable. 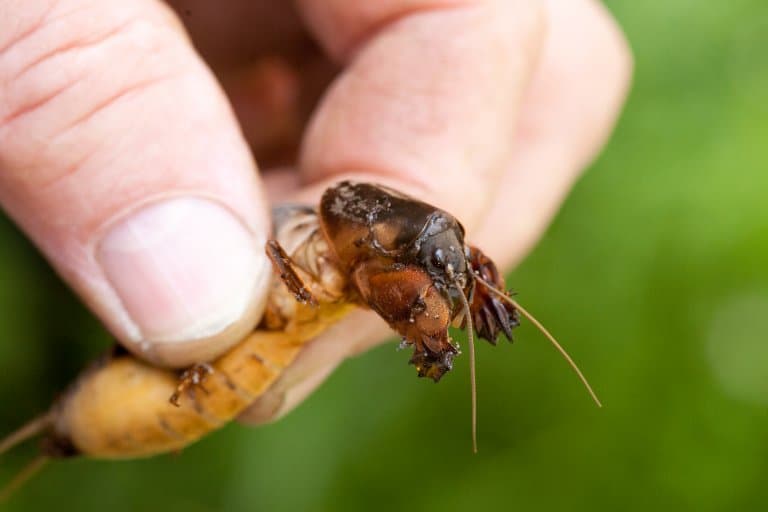 2. They can be heard from over half a mile away

Mole crickets make an exceptionally loud noise to attract mates. These tiny animals burrow into the ground and create an exponential horn-shaped entrance, which acts as an amplifier to the cricket’s call allowing it to be heard from over 600 metres away. This song can be comprised of over 200 distinct pulses per second, resulting in a continuous monotone chirp.

The loudest recorded song from one of these little crickets was over 90 decibels. That’s louder than a petrol lawnmower. For perhaps a more reasonable comparison, the well-known cicada can shout at around the same volume.

This call tells females more than just the location of the cricket. The sound transmits information about the physical structure of the burrow and the soil it’s made from. It’s thought that females can tell how wet the soil is from the way the sound reverberates around the burrow.

Damp sites are preferable for egg laying, so they will be keen to know how much moisture is available. While they spend most of their lives underground, some adult species have wings and can fly and females will often fly to the call of the male in its burrow. 1

3. They were written about in-depth in the early 1800s

To help illustrate how inspirational and cool these mole crickets are, the following is an excerpt from an 1825 publication of Philosophical Transactions; a sort of early scientific journal that dated back as far as the 1700s.

This passage not only describes the mole cricket’s digging claws but provides a wonderful example of the flowery language and unabashed enthusiasm imparted by animal writers in the early days of naturalist research:

“It might, I think, be asserted, without the fear of contradiction, that throughout the whole range of animated nature, there is not a stronger instance of what may be called intentional structure, than is afforded by that part of the mole cricket which I am now to describe…

…The insect does not make much use of its forelegs in walking; and, if irritated, it advances towards you with these legs elevated, in a menacing attitude as it were; not unlike the corresponding attitude of the insect, called the mantis.”

Perhaps unsurprisingly, this paper goes on for over 240 pages, covers the animal in thorough detail, and is an absolute pleasure to read if you’re into the sort language of Darwinian-era naturalism.

Fair warning, though: It’s quite a struggle if you’re not. 2

4. Females stay with their eggs

A mole cricket mamma will lay up to ten clutches of eggs at a time, totalling around 5000 eggs.

She’ll stay with them until they hatch, and to protect them will make a much quieter and less obnoxious mating call.

5. They have numerous life stages

Unlike many insects, whose lifecycle follows the egg-larva-adult pathway, mole crickets go through a series of further steps before they reach maturity. Crickets tend to routinely shed skins and go through what is known as instars; increasing stages of maturity with every shed.

From hatching, young nymphs tunnel continuously, eating all along the way, and rapidly growing. Usually the 5th instar, they develop wings and by the seventh, they carve out a permanent burrow.

This process can take 7-10 sheds to complete. 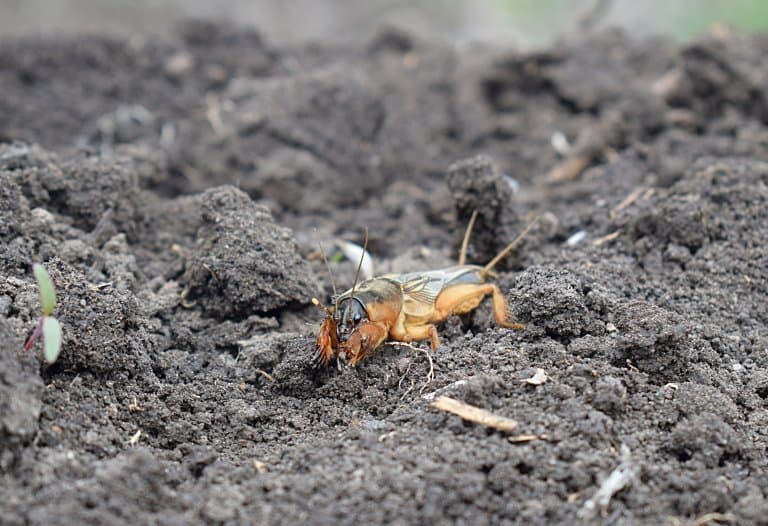 6. There are carnivorous mole crickets

The Southern mole cricket, unlike its more common and herbivorous cousins, prefers to feed on insects. This one lives in the US and is thought of as a pest by farmers whose land they dig holes in.

In the South of the country, the species is invasive and attempts to control it involve the introduction of its natural parasitoid wasps and flies. 3

7. They can float in water

Mole crickets are covered in tiny hairs that give them a velvety appearance and help them float in water. They can also swim rather well.

Depending on where you are, the presence of mole crickets might be associated with good news.

In Japanese folklore, mole crickets are associated with corpses and sins.

They like to tunnel through the top-soil, which creates small ridges which can damage delicate roots and grasses and disturbs seeds.

To a lesser extent, mole crickets also like to feed on plant roots and grasses, which can damage them. 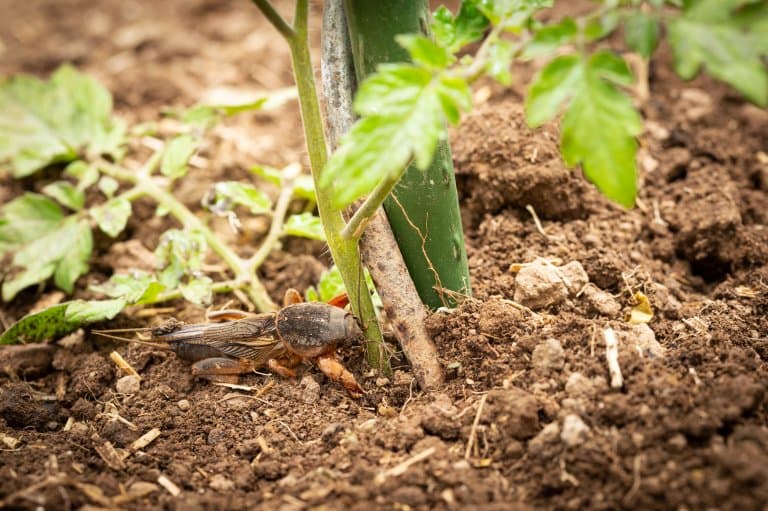