The mata mata, or sometimes “matamata”, is one of the largest freshwater turtles.

These well-camouflaged South American reptiles dress like a piece of wood with spiky ridged scales, and suck in fish from the murky shallows. 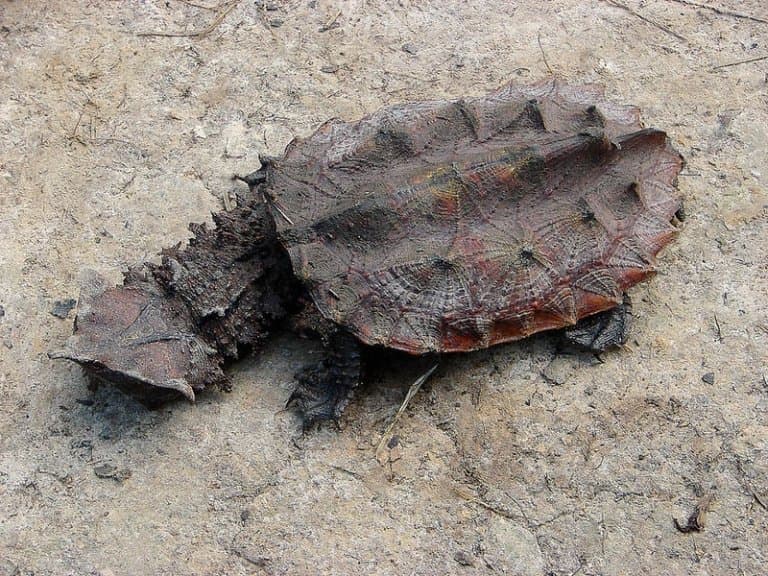 Mata mata is a strange looking turtle. Its head and neck are enlarged and flattened and riddled with warts and ridges known as ‘tubercles‘. It has a wide mouth and a long snout; on either side of which sits a shiny disc of an eye like a penny with a hole in the centre.

They might be ugly to some, but their rather odd looks do seem to be an adaptive benefit to their surroundings in a number of ways.

These turtles occupy river basins in South America ranging from Bolivia to Brazil primarily in the Amazon and Orinoco.

They were originally grouped as a single species, however, new taxonomic methods have shown this to be inaccurate.

The mata mata is nocturnal and carnivorous and likes to eat small fish and aquatic invertebrates at night.

The mata mata turtle has sizable populations across South America and their conservation status is listed as least concern by the IUCN.

1. They have flaps for camouflage

These turtles are covered in ridges, lumps and flaps of skin, making them ‘aesthetically challenged’, from a mammalian perspective. However, these flaps serve a number of clever purposes and are apparently quite attractive if you’re a female mata mata (more on that below).

One of the major redeeming features of being infested with gross protuberances is that you resemble decaying wood and generalised swampy putrefaction; stuff that’s relatively common and inedible in the habitat of the mata mata.

It also forms a contact surface for algae and weeds to grow on, further disguising the turtle as an uninviting piece of rock or wood. This camouflage, therefore, does a great job of deterring its predators. 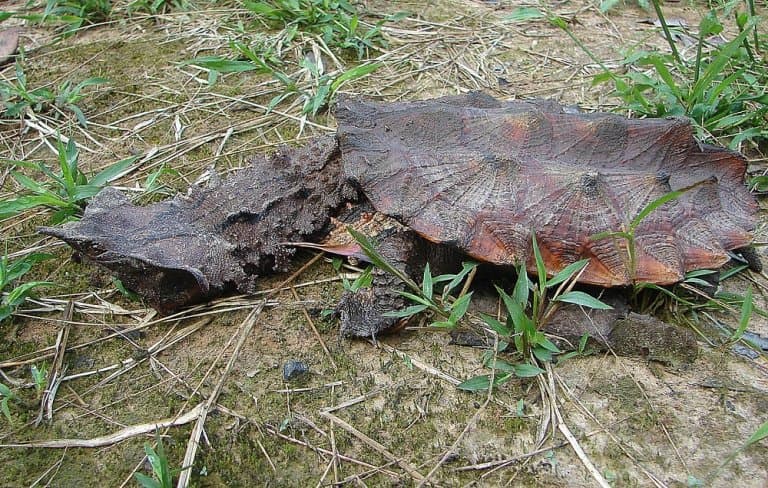 2. They have flaps for sensing movement

But that’s not all! These turtle flaps wave about in the water and are well innervated to pick up vibrations.

As such, they act a lot like the whiskers of a cat: sending information about the movement of the water to the turtle; useful for hunting, sensing the direction of flow, and avoiding big splashy dangers like crocodiles entering the water.

3. They shepherd food into their mouths

The mata mata has a strange way of hunting. In Trinidad, it’s been observed hunting at night with a unique method of herding its prey. They’ve been observed chasing their prey items into the corner of an aquarium, where they remain trapped.

From here, they’re able to make use of a suction method of feeding – much like some fish species – by lunching with their heads while opening their mouths. This creates a vacuum that pulls the surrounding water (and the fish in it) into the mouth of the turtle. 1

4. They have spines in their throat

These turtles have so many protrusions. Inside the throat of a mata mata are rows of spines, or papillae, that are thought to aid in holding onto food. This is relatively uncommon in freshwater turtles but is seen often in sea turtles, in which case it’s suggested that they aid in preventing regurgitation when diving.

However, mata mata seems to only live in shallow water, so to be adorned with these spines seems a little more strange. Their use in feeding seems to be the only explanation for this, but it’s not yet known exactly what they’re for, or why other chelids don’t have them. 2 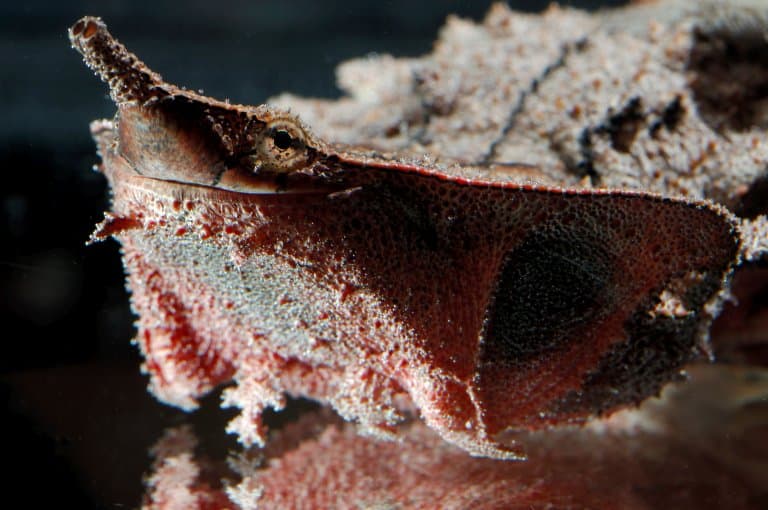 5. There are two distinct species

Until very recently, it was thought that mata matas were a single species. However, with the new developments in genetic analysis, researchers have been able to distinguish a second species from the population found in the Amazon basin, living in similar conditions in the Orinico and Rio Negro basins.

These latter populations have since been described as a distinct species called Chelus orinocensis and the Amazonian species is called Chelus fimbriata.

There’s certainly room for more research, and later studies may determine more species in the genus, but so far, two documented Chelus species are confirmed. 3

6. Their mating ritual is very alien

When a Mata Mata male sees a female he’s interested in, he begins a terrifying courtship ritual. With its head and neck extended, it opens and closes its mouth. It also stretches and hyperextends its hind legs and wiggles its little head flaps alluringly.

This Zoidberg-esque performance can result in the production of up to thirty eggs, which take up to 200 days to hatch.

Aside from the shepherding behaviour that we mentioned earlier, captive mata matas have also been seen making use of water pump flow to pin down prey items in their tanks.

It suggests they’re able to solve problems intelligently, and does promote the idea that there’s more going on inside that flat, lumy head than meets the eye. 4 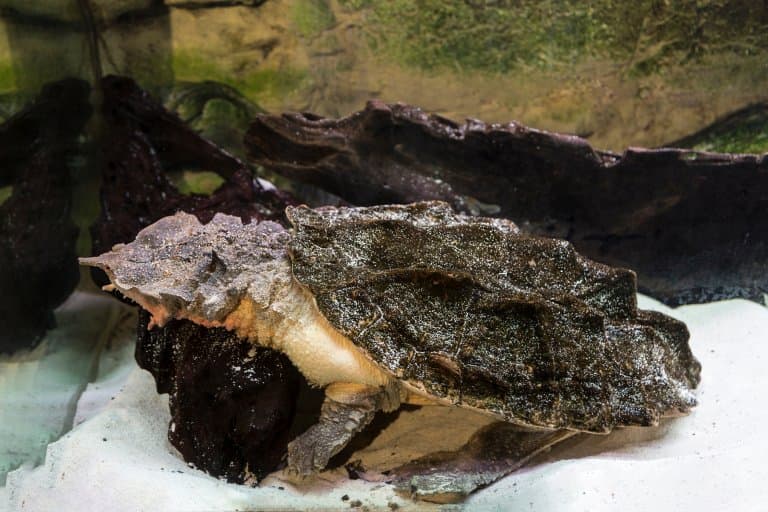 8. They’re not fond of basking

A lot of reptiles, perhaps most, even, love to warm up in direct sunlight to get their energy up for the day’s chores. The mata mata isn’t really into all that.

They spend almost the entire time in the water, using their elongated nose as a snorkel to breathe, and presumably pondering the mysteries of the universe until it’s time to eat, or do their weird mating dance.

These unusual animals aren’t threatened yet, as far as we know, but their unique qualities make them a common target of pet hunters, and they’re commonly hunted for aquaria.

They’re also relatively tricky to keep as pets, and don’t like the stress of being handled, so they’re often kept poorly and live with health issues in captivity as a result. 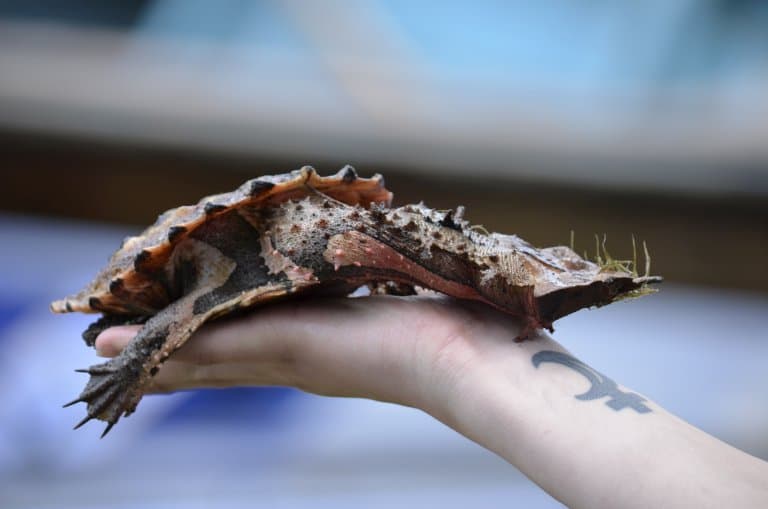