The marabou stork is a huge and fairly imposing bird that makes up part of the stork family.

It is native to sub-Saharan Africa and found in a variety of habitats that range from fairly dry to pretty wet and include savannahs, grasslands, lakes, rivers, swamps and even rubbish heaps.

It has black feathers that cover its back and wings, with white feathers around its neck and underbody. It has long, skinny legs, which help it wade through water if necessary and a large, pale yellow, wedge-like beak. They have small beady eyes surrounded by red mottled bare skin.

Their heads and necks are relatively feather free, with males and females both having large throat sacs, or gular sacs, that hang underneath. 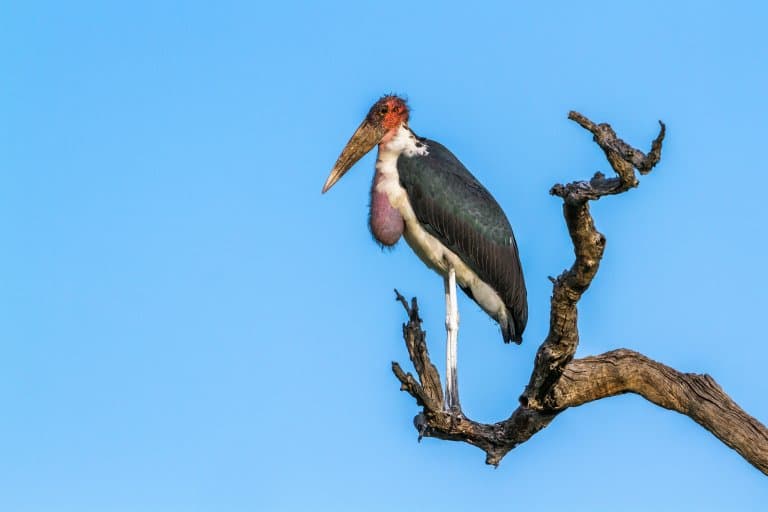 The marabou stork is thought to only reach sexual maturity at around 4 years old. Before this it is more brown than black in colour and has a smaller beak than when they become adults.

A marabou stork is known as a scavenger and can often be found near groups of vultures, feeding on bits of food that have been cast aside by them or waiting until they have had their fill and then eating what they can from what is left. They will also eat other carrion or dead animals that they can find, which serves as an important function to stop the spread of disease.

In urban areas groups of these storks can be found around rubbish heaps, searching for whatever they can find, sometimes consuming things that appear inedible.

During the breeding season marabou storks will generally feed on live prey, such as certain birds and chicks, but also insects, frogs, lizards and also eggs. This is linked to the fact that their offspring require live food when born and it is easier to eat the same during this period.

Marabou storks generally breed during the drier seasons, as it is easier to find their live food sources when bodies of water begin to dry up. They nest high in trees, often in large social colonies. They form monogamous pairs, with females laying between 2-3 eggs after approximately 30 days of incubation.

The marabou has a large gular sac that hangs below its throat. It inflates this with air and uses it to make particular noises linked to their nostrils, especially during courtship rituals throughout the mating season. On the whole these birds are fairly silent as they don’t have a voice box, but can be seen clacking their bills (also known as ‘bill-rattling’) when displaying to others.

The word marabou is thought to come from an Arabic word meaning ‘hermit like’ or ‘quiet’.

1. It is called the ‘undertaker bird’

People sometimes call the marabou stork the undertaker bird because from behind it often looks like it is wearing a long black cloak, has a hunched appearance and has white on top, similar to hair.

They also congregate around dead animals, that they can feed from. 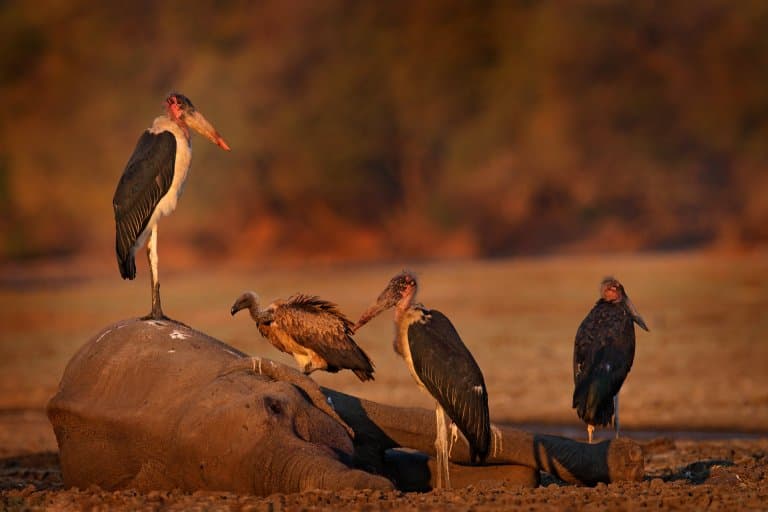 2. Its wingspan is one of the largest of any land birds on the planet

From tip to tip a marabou’s wingspan can reach over 12 feet (3.7m), making it one of the largest of any land bird on earth.

While some reports suggest their wingspan can grow as large as 13 feet (4m), these are unverified. Typically their wingspan will be between 225–287 cm (7–9 ft).

3. A group of marabous is known as a flight, muster or phalanx

Marabous can be seen in large groups and colonies often in trees.

4. They are bald for a reason

Just like vultures, these storks have long necks and bald heads.

This is an adaptation that helps them stay cleaner when putting their heads inside carrion and stops blood from matting and clogging up any feathers. 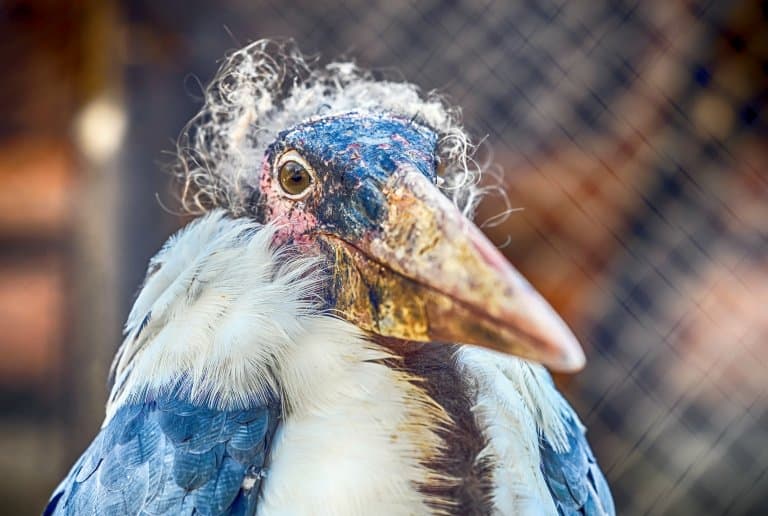 5. They poo on their own legs

The legs of a marabou stork are often seen to be covered in their white faeces.

They do this to help cool themselves down in the heat of the day. They can also be seen to open their mouths with their tongues out to help cool down too.

6. Their gular sacs are huge!

The marabou’s gular sac, which is mainly used to help find a mate can be up to 45cm long before it is even inflated. 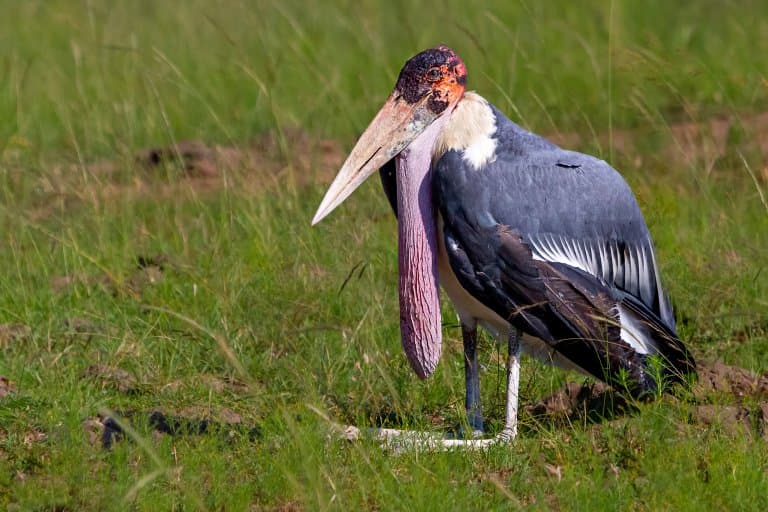 These storks are known to fly high up in the air looking for food and utilising thermals. They have been seen as high up as 13,000 feet.

8. Marabou feathers were used in fashion

The soft feathers on the tails of marabou storks were used in the past to make scarves and also to trim certain items of clothing, such as hats, and shawls. 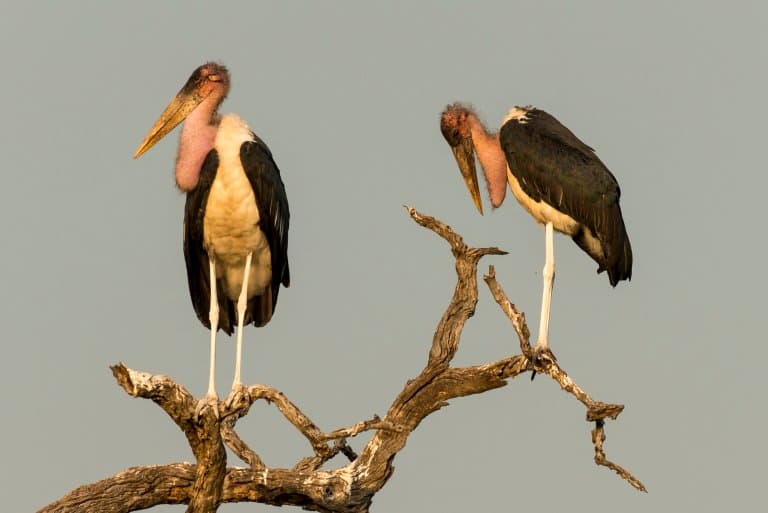 During bushfires and burning, instead of fleeing the fire, marabous will head towards them. This is so they can make the most of all the animals that will be trying to get away. 1

10. They can show ill-temper

Marabous and humans live in many of the same areas and this stork has become very used to this.

At times however, especially when things are more tense during the breeding seasons, marabous have been known to snap at each other but also at humans who may be in the area too. 2

11. They occassionally eat other birds, even flamingos

While this powerful bird mainly eats carrion and scraps, it will occassionally eat other birds and chicks, such as pigeons, doves and even flamingos. 3

12. They have hollow bones

The bones in the marabou’s legs and toes are hollow. This is an important adaptation that has allowed this huge bird to fly.

13. They retract their necks when they fly

Much like many heron species, the marabou stork pulls its neck back into an S shape when it is in flight. This is different to other types of stork who keep their necks elongated when flying.

The marabou is thought to do this to help take the weight of their beaks and also make them more streamlined.

14. They have sensitive bills

The beaks of marabous are very sensitive to their surroundings. When searching for food whether on land or in water, they use their beaks to locate it and then snap it up.

It may appear that marabous spend a lot of time just standing around. This however is not true.

While standing they are conserving energy and also spending time digesting fully. Also they may spread out their wings during this time to help catch sun rays and warm up. 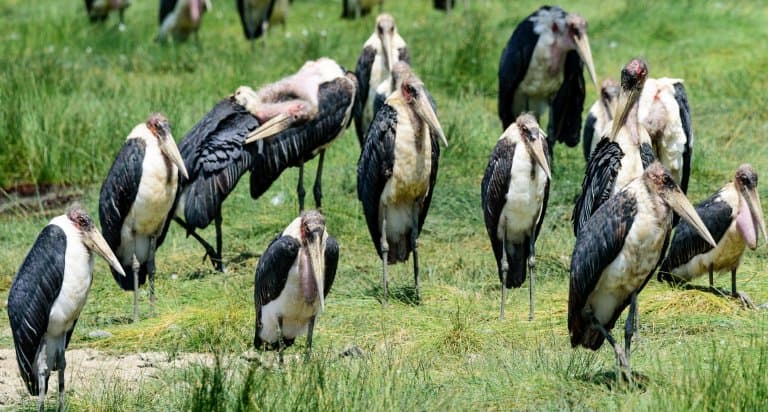 16. Their name links to a money sack

The Latin name for a marabou stork is Leptoptilos crumenifer. The word crumenifer is the Latin word for a money bag that was worn around the neck.

This is thought to link to the way the gular sac looks, hanging down from the throat.

Survival rates of young animals in the wild are generally very low, due to predatation, disease and more. However, survival rates of marabou storks are quite positive, and higher than other species, such as white storks. They can live up to 25 years in the wild, and 40 in captivity. 4

18.  In some countries they are hunted

In certain countries, such as Nigeria, they are hunted and used in traditional medicines.