There’s a large predator returning to parts of Europe. This 30kg cat can take down prey even larger than itself and likes to sit in ambush before pouncing on its victim, piercing the neck with its teeth.

This is a lynx, and it’s one of the rarest sights to see in the European and American wilderness. 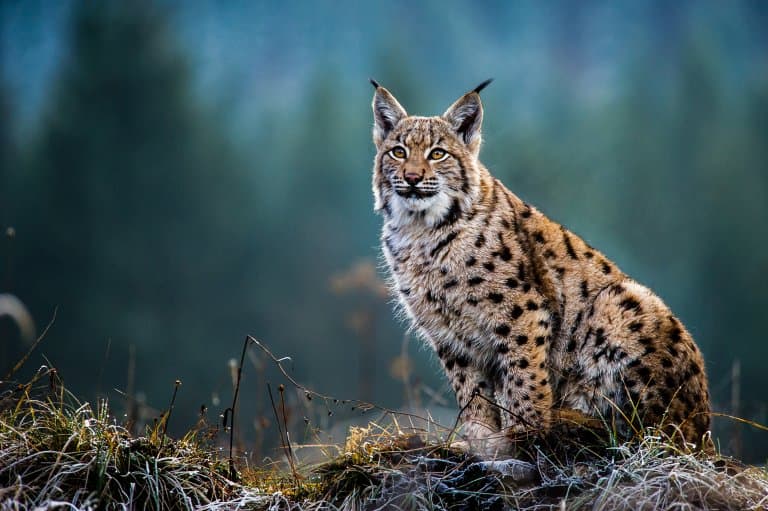 Lynx were once found all over Europe and throughout the Rocky mountain of North America. Sadly, numbers have been devastated by hunting for their fur, and it’s only been in recent years that the appropriate protections have come into place to allow their populations to increase.

These are agile, powerful predators who play a very significant role in their ecosystems. They’re well adapted for their rugged terrain, and they seem to do really well for themselves when humans stop trying to kill them.

There are 4 living species of lynx, the Canadian lynx, Iberian lynx, Eurasian lynx, and bobcat.

Lynx prefer to inhabit high altitude forests and live in dens, often in rock crevices, under ledges or hollowed out trees. They are usually solitary and nocturnal, but do sometimes hunt together, and will mate in late winter. Much like domestic cats, they will mark territory by spaying trees with urine.

They diet on a variety of animals, including deer, reindeer, hares, foxes, birds, fish and other small mammals, amphibians and invertebrates.

Their conservation status is largely fairly healthy for 3 species – the Canadian lynx, Eurasian lynx and bobcat are classified as least concern by the ICUN.

The Iberian lynx is listed as endangered, due to poaching, fragmentation of habitat and the decline of its main prey, the European rabbit (due to rabbit haemorrhagic disease).

1. Only half of the offspring survive the first year

Lynx mothers make dens in steep, rocky outcrops, giving birth to one to three kittens at a time. The den surface is around 1 meter squared and it’s protected by rocks and soil to keep the kittens protected from extremes.

Despite this, around half the offspring don’t make it through the first year. This makes them vulnerable to extinction, something with was a very serious threat until recently. 1 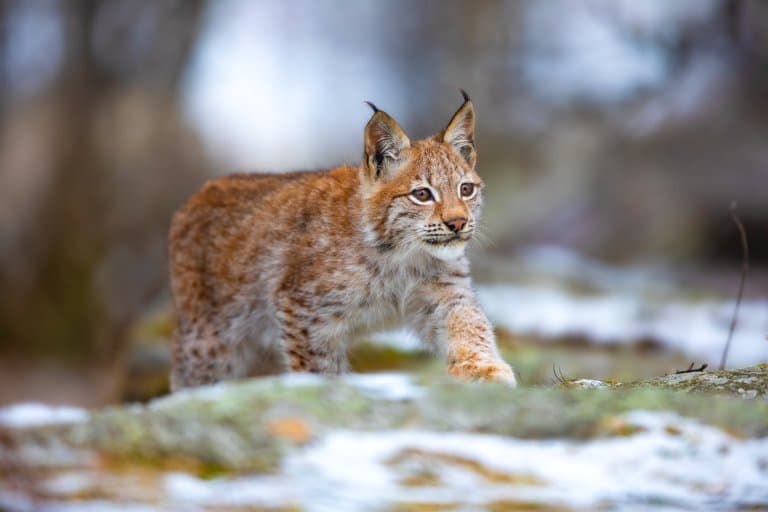 The Eurasian Lynx played a critical role in European ecosystems for millennia. They’re the third-largest predator in Europe and the largest of the four lynx species. While they’re not quite as big as a wolf, they’re still listed as top predators and therefore have a significant impact on their environment.

However, until very recently their numbers had dwindled, with many localised populations going totally extinct. They were hunted to this level for their stunning coats, and reduced in number to below 700. Since then, legal protections have helped remaining species recover and other populations have been reintroduced to bring the numbers up to around 10,000 in Europe today.

Still, the vast majority of reintroductions until recently were done with little follow-up and were mostly unsuccessful. It’s only in the last decade or so that conservationists are effectively managing and tracking the subjects of reintroduction programs, and learning why these animals don’t always thrive when released into a new location.

As with many animals, the Eurasian lynx is affected by habitat fragmentation. This means, that even with viable populations for genetic diversity, animals are trapped in small pockets and can’t reach one another to breed.

Extensive road systems in Europe represent one of the barriers for these populations, and there are high numbers of mortality in lynx populations that have been reintroduced, with many individuals being hit by cars as they try to travel between habitats.

Conservationists focusing on lynx reintroductions are trying to figure out the best ways to manage these risks. So far, the location of the reintroduction, its timing, and proposals for national wildlife corridors are all strong components of the wildlife management program for lynx in Europe. 2 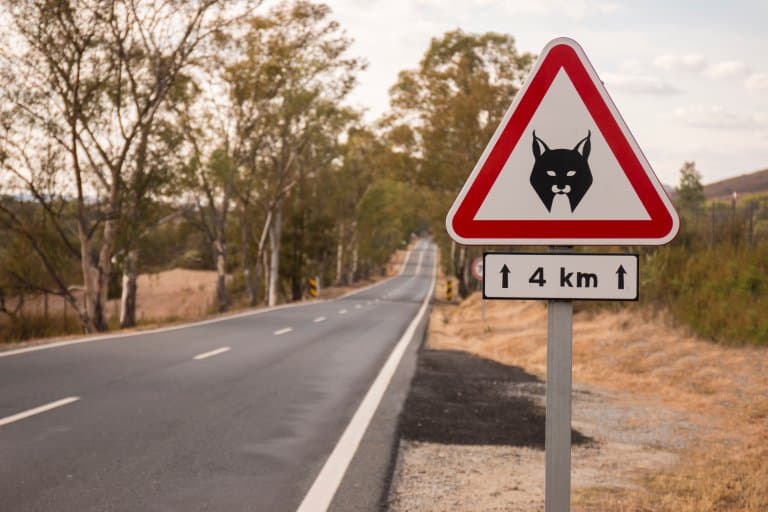 4. They create an ecology of fear that can fix rivers

Lynx are a keystone species for a number of reasons. As large predator, they keep populations under control, but when ambush predators like this are about, prey animals need to stay on the alert. This leads them to alter their behaviour; staying away from areas in which they could be easily cut off or ambushed.

This rules out a lot of the favourable grazing land of large herbivores, which in turn allows it to succeed from grasslands towards forest, binding the soil with tree roots, and even securing the riverways. New trees bring new insects, which are followed by bats and birds, and within a few generations, the entire ecosystem is transformed as a cascade of effects from the presence of a top predator.

They fit so well into these ecosystems due to a series of specialized adaptations. 3

Many lynx habitats face a significant amount of snow in the Winter, and the lynx have adapted well to this. Their feet are webbed and wide, acting as specialized shoes that distribute their weight effectively. This allows them to hunt in deep snow! 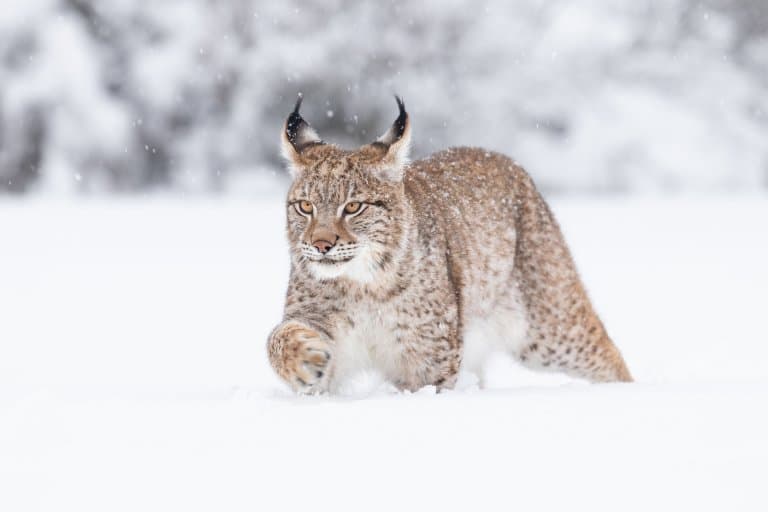 6. They have exceptional ears

Lynx are all equipped with little tufts on the tips of their ears.

Aside from making them look cute, they may also function as an advanced hearing aid in snow, though this hasn’t been confirmed.

Regardless, the Lynx has keen hearing and uses it to sneak up on prey it can’t even see.

7. They have phenomenal agility

One thing is certain though, they are excellent acrobats. They can jump well over 2 meters straight up, and can lunge at prey with rapid acceleration. They can also hold onto large prey with their great strength, biting it in the neck to bring it down quickly.

8. They have unsubstantiated eyesight

There’s an unsourced claim going around that a lynx can see a mouse 76m (250ft) away. However, when tested, researchers concluded that they have more or less the same visual acuity as a house cat, and far less than a human, so it’s unlikely to be true.

They do have very shiny eyes, though. It’s possible the word Lynx comes from the Greek word Leukos, meaning bright. They are particularly good at spotting vision and can see in colour. 4

9. Their coat changes color with climate

In colder more northerly climates lynx tend to have light color fur, which is thicker. While the Bobcat in Southwestern US are much darker and shorter haired.

During summer the Eurasian lynx has a short brown-reddish coat, that changes in colour with the season and turns more grey-brown or silver-grey during winter.

10. Lynx have a short stubby tail

Unlike many cats, lynx have a small ‘bobbed’ tail comparatively to their body size. Tails are often used by cats as balance, or even a ‘rudder’ for changing direction quickly when running at pace.

It’s believed that the lynx’s small tail is from a genetic mutation, which hasn’t hampered their survival. 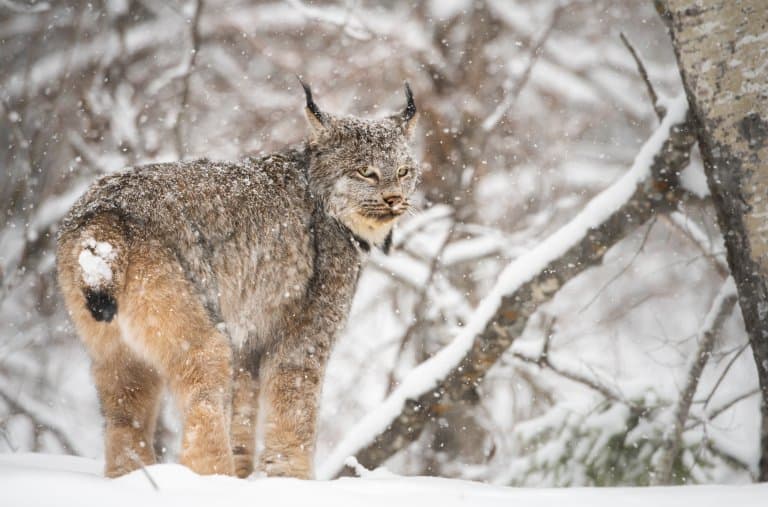 10. Iberian lynx are still endangered, but were listed as critical

The Iberian lynx was the most endangered cat species in the world. However, conservation efforts helped change its status from critically endangered, to endangered.

In 2004, there were thought to be around 100 Iberian lynx in southern Spain and due to efforts from both the Spanish government, and organisations such as WWF, the population is thought to have tripled to over 300 now. 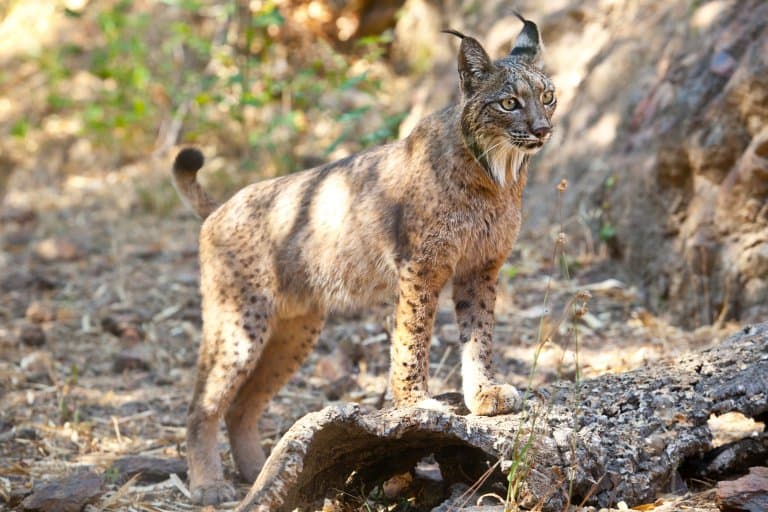