Lionfish are a group of fish known for their maroon, white or black stripes, intricate fins, and venomous spiky extensions. They have also been called turkeyfish, firefish and tastyfish.

They inhabit coral reefs of the Pacific Ocean, as well as the Indian Ocean, and are capable of adapting to a wide range of environments that vary in temperature and depth. 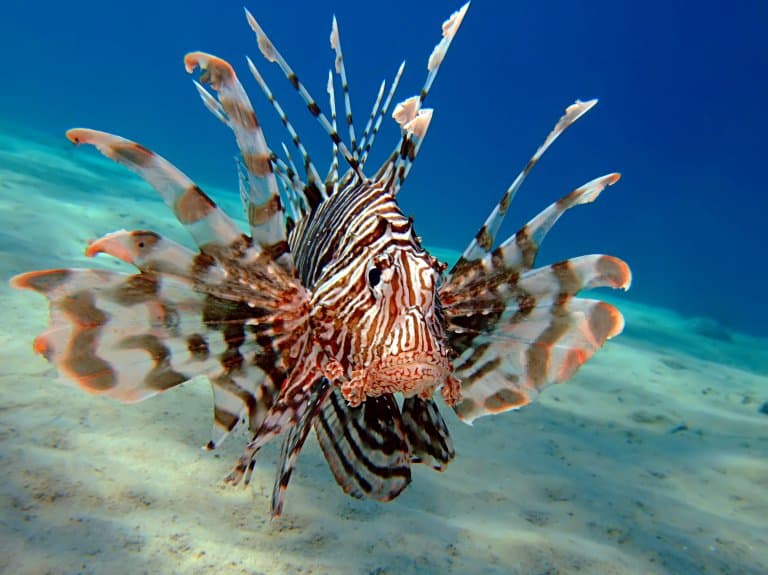 There are 12 species of Lionfish, and 2 species, the red lionfish and the common lionfish are currently classified as invasive species.

Like many other fish, the lionfish congregates in groups called schools. They prefer to live in rocky habitats that allow them to camouflage with ease.

Lionfish diet on small fish, invertebrates, and mollusks and have few natural predators due to the potential threat of their venomous spikes.

The lionfish is edible, and it has been said that they are quite delicious. However, due to their venomous spines, they need to be processed with care prior to being consumed.

In captivity, this marine fish is commonly found in aquariums around the world.

1. Their dorsal fins are venomous

To humans, a lionfish sting is extremely painful and can bring about severe nausea and impair breathing. Fortunately, while unpleasant, injuries are rarely fatal.

Lionfish are venomous, not poisonous. Poisonous animals release their toxins when they are ingested, whereas venomous creatures apply their toxins via a bite or a sting. 1

2. They were so named because of their appearance

The fan-like arrangement of their long dorsal fins and spindly pectoral fins resembles that of a lion’s mane. Hence the name, lionfish! 2 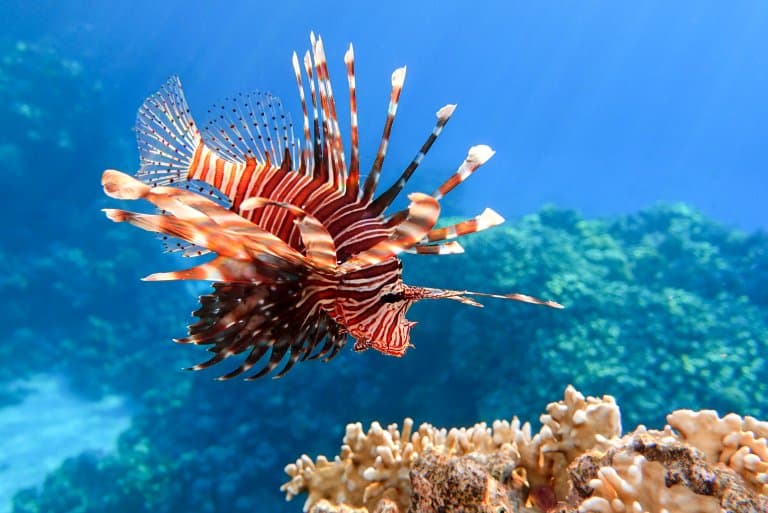 3. They are fierce predators

Lionfish have been documented to hunt over 50 species of fish. They will corner prey and strike, engulfing their meals in a swift bite.

Because of their voracious appetite and invasive patterns, there is growing concern over their impact on many tropical habitats around the globe. 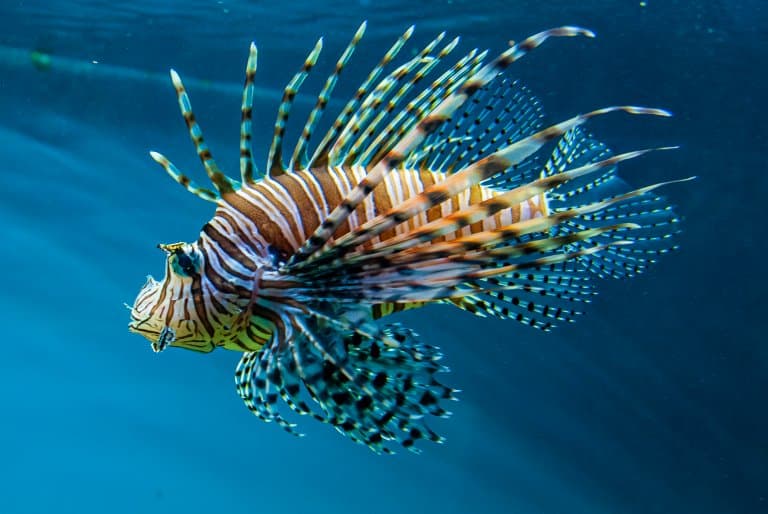 4. To accommodate their large appetites, they have enormous stomach capacities

A lionfish’s stomach can expand up to 30 times its regular size. Gobies, snappers, and groupers are some of its favorites. 3

5. Their scales have a unique shape

Lionfish have cycloid scales that are thin and oval-shaped with smooth edges.

Other fish, such as trout and carp, also have scales like this. 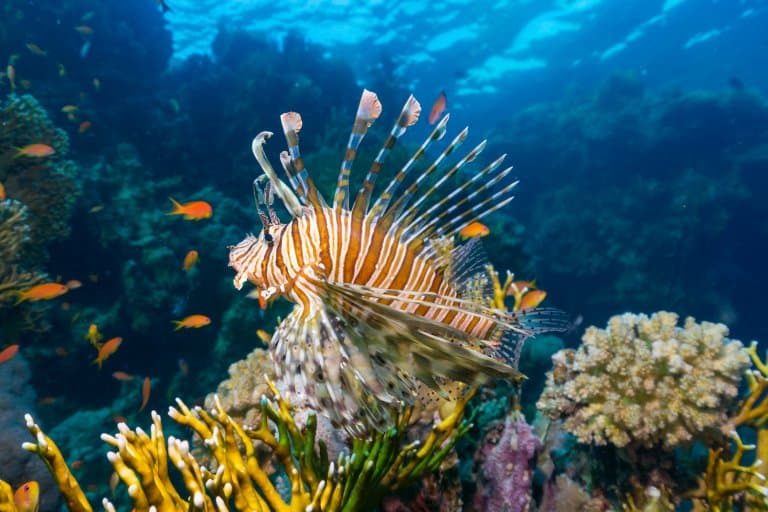 6. Lionfish venom contains a potent mixture of neurotoxins and neurotransmitters

After being punctured by a venomous spine, the acetylcholine (a neurotransmitter) present in lionfish venom causes changes in heart rate, muscle spasms, and dizziness.

If you find yourself being stung, seek medical attention straight away.

7. They are ravenous carnivores

Lionfish will eat pretty much anything they can get their mouths on.

When prey is lacking, they have also been found eating members of their own species.

Lionfish are territorial and will fervently contest others to protect their space. Males are particularly aggressive, frequently fighting other males by charging and aiming their spines at their opponents.

9. Females lay thousands of eggs at a time

A collection of lionfish eggs is called a clutch. A single clutch can contain between 2,000 to 15,000 eggs.

Females will lay their clutches into the water before a male fertilizes them.

10. They require over a year to mature

In the wild, lionfish can survive for up to 15 years. After hatching, they take approximately 18 months to reach full maturity.

11. They usually hunt at night

Lionfish are believed to be nocturnal creatures, preferring to hunt at night. 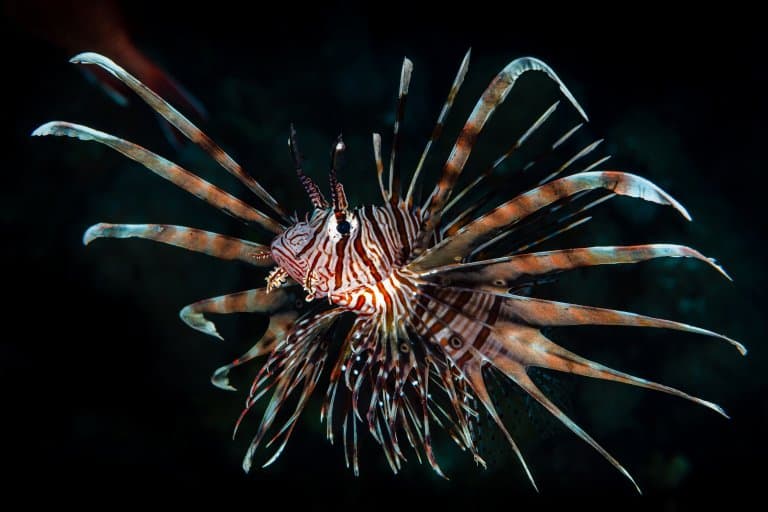 12. Little is known about their natural predators

Few dare to attack lionfish for fear of being pierced by their thorny fins. Research suggests some fish would rather go without any food than eat a lionfish.

Laying thousands of eggs each time, female lionfish can produce up to 2 million eggs per year. This further adds to their capacity as an invasive species.

14. There are competitions held to control lionfish populations

Competitions, termed derbies, are held in areas where populations are especially overwhelming.

Contestants are recognized based on how many lionfish they can catch within a specified length of time! 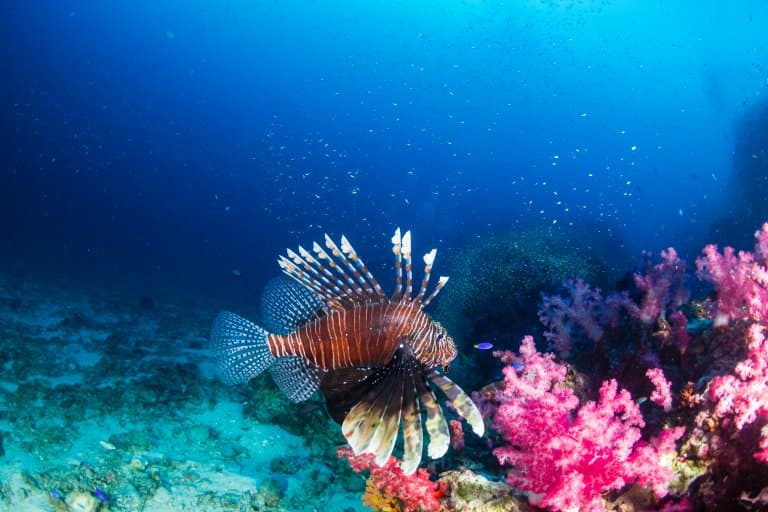 15. Their expansion is truly unprecedented

To many marine biologists, the rate at which lionfish numbers have grown is astounding.