Madagascar is home to some incredible, unique species of flora and fauna, perhaps none more iconic than the lemurs.

These are small, wet-nosed primates, distantly related to monkeys and apes, and have historically occupied almost every niche on the island. 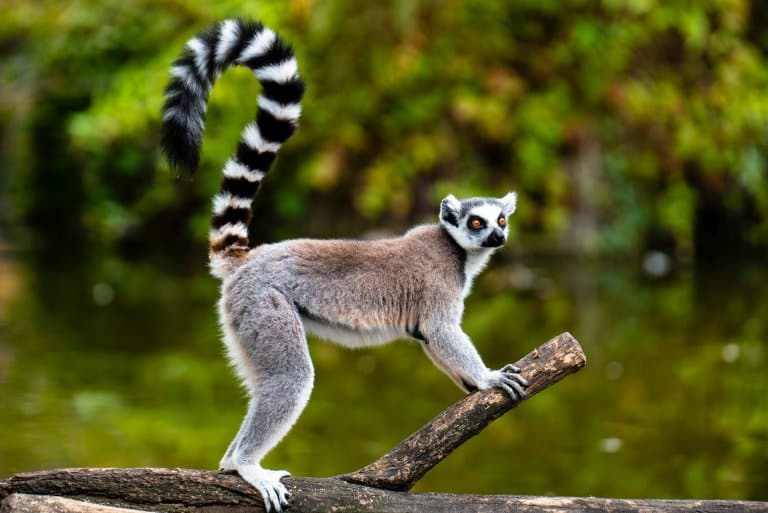 Lemurs are cute little wet-nosed, small-brained mammals who smile. They are mostly arboreal, meaning they spend most of their lives in trees, and are active at night.

Their exceptional diversity is unquestionable, though its extent is a matter of debate. There are over 100 species of lemur, from 8 different families. They range from a tiny 2.5 inches to quite hefty 2.5 feet in size, and until recently were even larger than that.

They live in social groups of up to 15, where they often sleep together during the day, and then feed alone at night. They are often lead by a dominant female lemur.

Lemur diets vary based upon the species, but many of the smaller species like to eat insects and fruit. Larger species of lemur feed on woody plants, trees, shrubs, leaves and herbs.

Sadly many species of lemur have gone extinct over the past 2,000 years due to humans and many today are still endangered due to habitat loss, and hunting.

1. Their name means ghosts or spirits in Latin

The name lemur comes from the Latin word lemures, which were ghosts that were exorcised during the Lemuria festival of ancient Rome.

This name wasn’t actually in reference to a ghost-like appearance, or reflective eyes, or calls – but due to their nocturnal activity and slow movements. 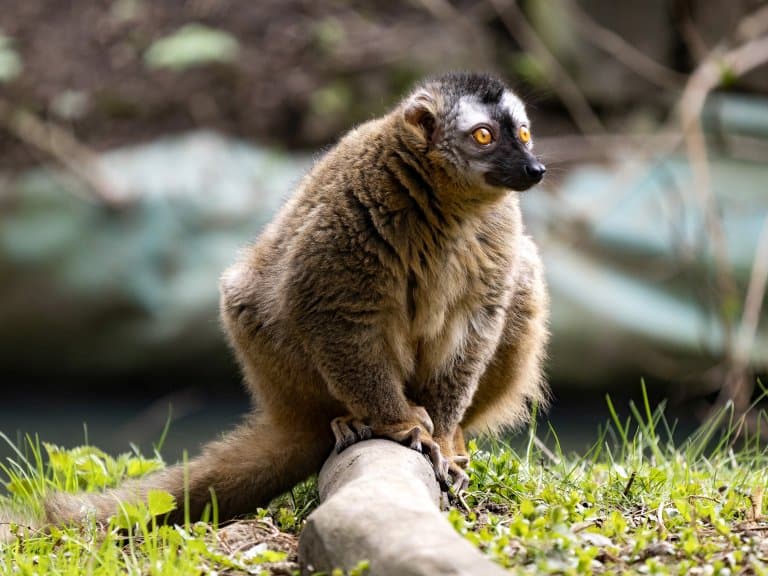 2. They’re all in Madagascar!

There are lots and lots of lemur species. At least one hundred, in eight families and probably more than 15 genera. You’d think they would be spread out all over the tropics, but they’re all found in Madagascar.

This is a great example of the unique diversity you can get when animals are cut off from their distant relatives by an island, or a mountain, or some other isolating factor.

Sadly, they’re now limited to around 10% of their original habitat, and despite their diversity, they are a fraction of what they used to be with species from 5 of the 8 families living today.

3. There were once lemurs the size of gorillas

Humans have a very consistent track record of wiping out large animals wherever they go. Despite being relatively close to the set-off point of early hominid exploration, Madagascar was somehow spared this nomadic wave of destruction for over 200,000 years. Humans finally found the island around 2,000 years ago, and in classic fashion, set to work killing off all the animals.

One of the most exciting casualties of this 17-species holocaust was a great, 200kg lemur called Archaeoindris. Despite its exceptional size, this lemur might have been one of the most adept at hanging from branches of any primate. It may have been hunted to extinction but it’s also likely that the habitat destruction for monoculture farming removed all of the niches it occupied on the island.

For comparison, this is exactly what’s still happening today, for example, to the remaining animals in the Amazon, as unique and diverse forest ecosystems are being torn down to grow soy crops to feed farm animals in the West; and it’s why forest protection is so important to ecologists. 1

At the other end of the spectrum, there are tiny lemurs called mouse lemurs, who are also very diverse. These miniature lemurs weigh as little as 30g, and while they all look very similar, turn out to have exceptional genetic diversity. This is what’s known as cryptic speciation, in which animals hide their differences from people very well.

In Linnaean taxonomy, species were determined by looking at them. This works in many cases but leaves a lot to be desired. With modern DNA sequencing, we can see that many of the animals classified as the same species are in fact totally different in their genes.

In mouse lemurs, it’s thought that their divergence evolved around mating calls, which are one way to tell the species apart. Since they live in the dark and occupy more or less the same niches, their appearance didn’t need to change much. 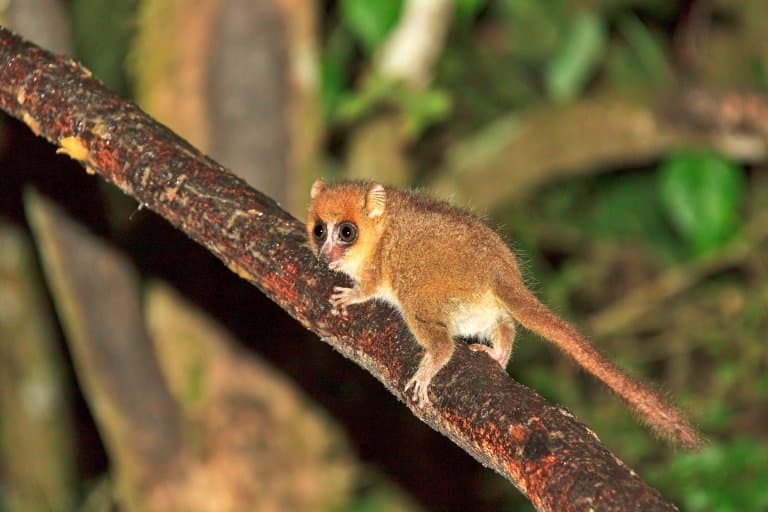 5. They are important pollinators

Ruffed lemurs are considered to be the world’s largest pollinators. They help this process, by getting pollen on their noses while they eat nectar and tropical fruit, and spread it to other plants as they continue to forage. 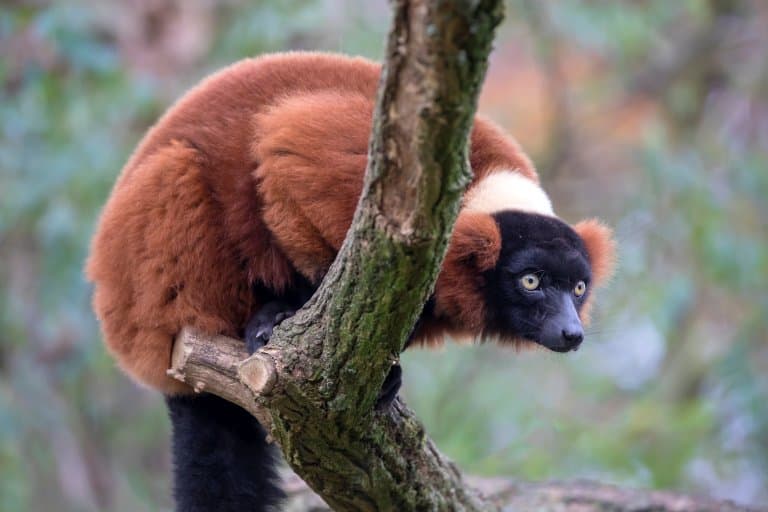 6. They are (maybe) exceptionally diverse

Lemurs are some of the most diverse of the primate group. There are at least 100 species, and as we mentioned, even within the mouse lemur genus there is significant genetic diversity. At least, that’s what’s been made official.

There are some critics who suggest that the naming of lemur species has become a bit of a sport, and this is an example of “taxonomic inflation”, and that the rapid increase in described species over the last few decades isn’t simply due to new discoveries, but also down to researchers watering down the definition of “species”.

This riveting debate is another one of the reasons why it’s a good idea to avoid taxonomy unless you’re really, really into it. 2

Sifakas have some excellent adaptations to tree-dwelling, to the point where they’re not very well-adjusted to moving along the ground.

When they do have to cross terrestrial distances, the shape and tension of their body mean they are most efficient at leaping sideways. 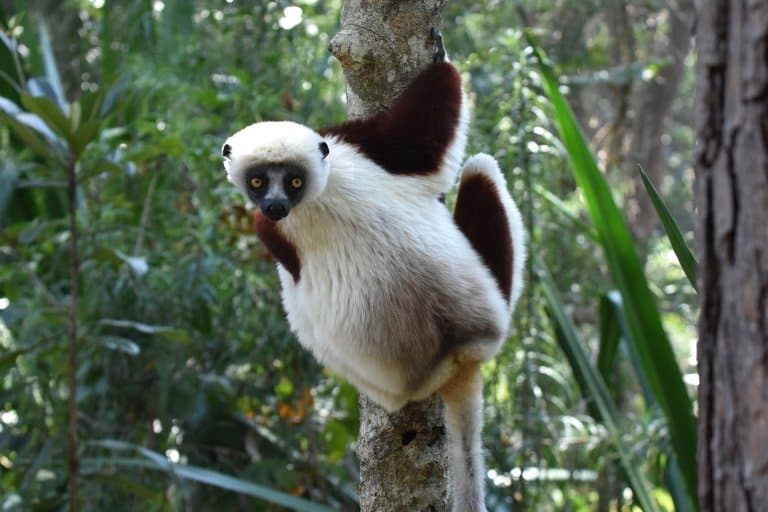 In some non-human primates, pulling back the gums to show teeth could be considered a threat display. It’s basically a warning that you’re about to get bitten. So, it’s sort of weird that humans, as primates evolved to use smiling to indicate the very opposite.

And so it is, if you were to smile at a chimpanzee, he might think you’re afraid. On the contrary, an orangutan may think you’re angry.

Except in some very creepy situations, a smile rarely indicates a threat in human culture, and this, as it happens, is also true in some other primates.

Lemurs are an example of primates who smile as a gesture of submissiveness. Like people, their smile is a clear message that they mean no harm, and that they aren’t going to make a scene.

It’s probably sensible to note that this is a very generalised summary, and there are a lot of contexts where smiling can mean different things to different animals, so as a rule, it’s best to remain stoic in their presence. 3

9. They are the only other primate with blue eyes

From studies of over 600 primate species, only two are known to have blue irises: blue-eyed black lemurs, also known as Sclater’s lemurs – and us, humans! 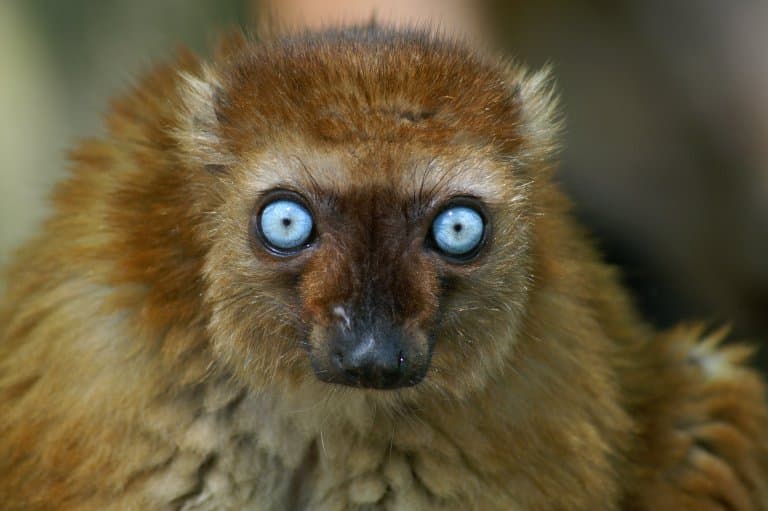 10. They have small brains

You’d think this would explain why they’re always smiling, but when researchers looked into the relatively tiny brain of a lemur they found that there really isn’t much difference between the cognitive abilities of a lemur and some of the fatter-headed primates like monkeys and great apes.

Ever since humans discovered they have large brains relative to their body size, they’ve been trying to confirm their suspicion that this makes them special.

Yet, there still isn’t much evidence that you can predict intelligence from brain size, and if you needed any more evidence, consider that a smart animal would have stopped looking a long time ago. 4

11. The ring-tailed lemur is considered iconic

This species in particular is an icon of Madagascar and has drawn much attention of the plight of lemurs.

Their presence, and other species drive tourism to Madagascar’s national parks and this ecotourism help support ongoing conservation efforts and Malagasy people. 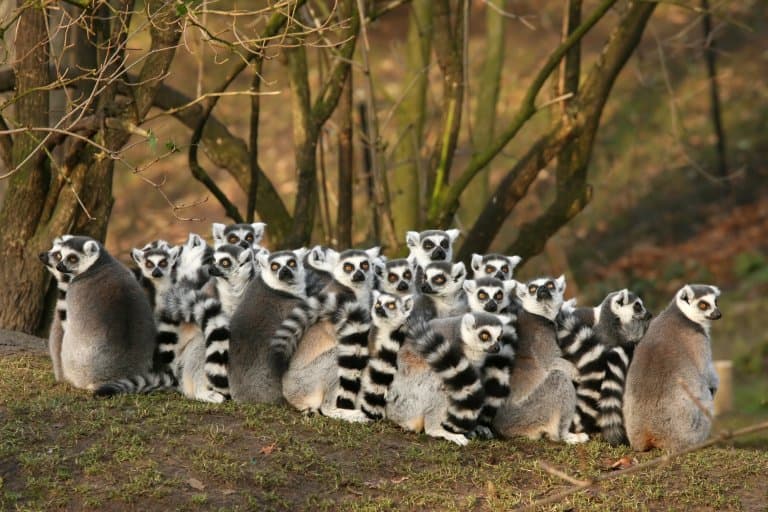 12. One species is believed to be a bad omen by locals

Legend has it that the rare species of lemur, called the Aye-aye, is a bad omen.

If the rather bizarre looking Aye-aye is caught by someone who sees them as evil, the animal is killed on sight and hung, so that the evil spirits can be carried off by travelers.

Others believe that if an Aye-aye points its middle finger at you, you have been marked for death. If an Aye-Aye appears in a village, it typically means that someone in that village is going to die and the only way to prevent that from happening is to kill the Aye-aye. 13. Sadly, around 40% of all lemur species are endangered

Due to habitat destruction, climate change, hunting for food and the illegal wildlife trade. In 2005 the IUCN studied lemurs and concluded –

Since 2005, many new species have been discovered and have their conservation is yet to be studied. However, it’s thought many of these are also threatened.

Less than 10% of Madagascar’s land area remains forested since deforestation intensified in 1950, and only 3% of it is actually protected due to the poor financial situation in the country.