Of all the animals in the Dermochelyidae family, only one extant species remains. The last survivor of a family of seven genera, and countless species.

This lonely animal remains relatively unchanged for a hundred million years and carries with it a prehistoric set of adaptations, not found in its Gen-Z cousins.

This is the leatherback sea turtle, an enormous relic, critically endangered by human interference. 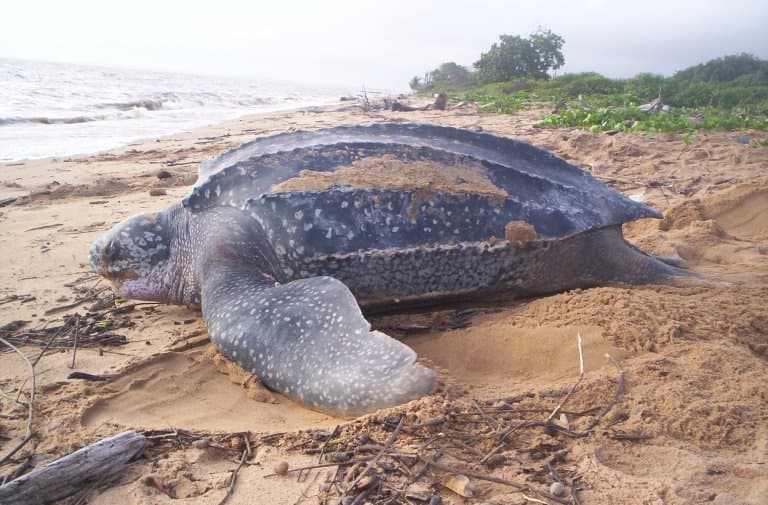 Leatherbacks are a long-lived species of sea turtle that travel so fast and so deep, there’s still a lot we don’t know about them. They are sometimes referred to as the lute turtle, leathery turtle or ‘luth’.

They can be found in the open ocean, and have a global range, with three distinct populations in the Atlantic, eastern Pacific, and western Pacific Oceans.

They feed nearly exclusively on jellyfish, but will also eat small crustaceans and fish. They are important in the eco-system for keeping jellyfish populations in check.

During the nesting season, female leatherbacks will come ashore on sandy beaches and lay eggs in a hole. Around 100 eggs will be laid, and covered with sand, before she heads back to the ocean. A couple of months later they will hatch, dig their way out and scurry to the sea instinctively. Many predators such as gulls, or fish will prey upon the tiny hatchlings.

Leatherbacks appear to be adapted to peculiar environments most reptiles can’t handle, and this has helped them sustain their 100-million-year lineage.

A lineage that is now at risk of being snuffed out by the destructive capacity of human feeding habits and are considered critically endangered by the IUCN Redlist.

1. They are named ‘leatherback’ after their leather-like skin

Unlike other sea turtles, the leatherback sea turtle doesn’t have a typical bony shell. Instead, its shell is covered in oily flesh and a leathery-like skin both in texture, and appearance.

They have 7 ridges on their carapace (their shell), which is where they get the name ‘lute’ or ‘luth’, after the 7 strings of the musical instrument with the same name. 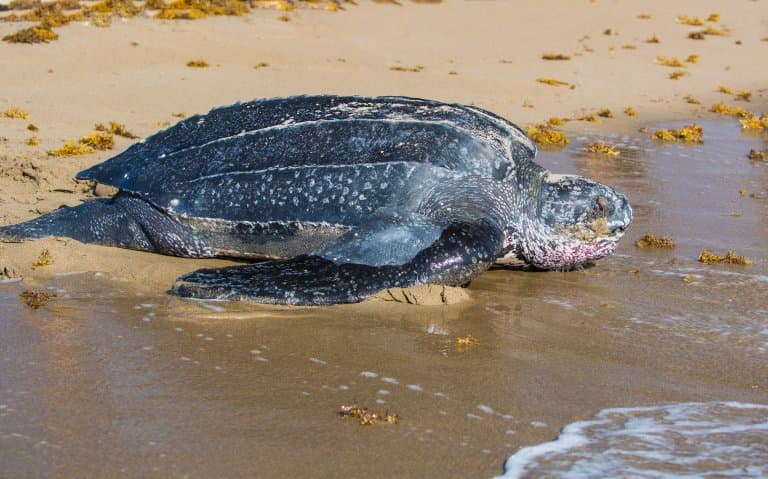 2. The largest turtle ever found

The National Museum in Cardiff has an example of the largest (extant) sea turtle ever discovered. This huge figure was picked up on a beach in Wales, in 1988. The crane used to lift it recorded a 2,000lb load, and an 8.5ft animal, which remains the largest turtle on record so far.

There are some doubt over the accuracy of this claim, with researchers claiming the size is actually closer to 1.5m.

Like many reptiles, it’s thought that leatherbacks can live a long time, and often, unlike mammals, the longer they live, the larger they get.

This one was estimated to be around 100 years old, but by whom and based on what seems to be a bit of a mystery. The sheer size of the animal does suggest it would be older than average. 1 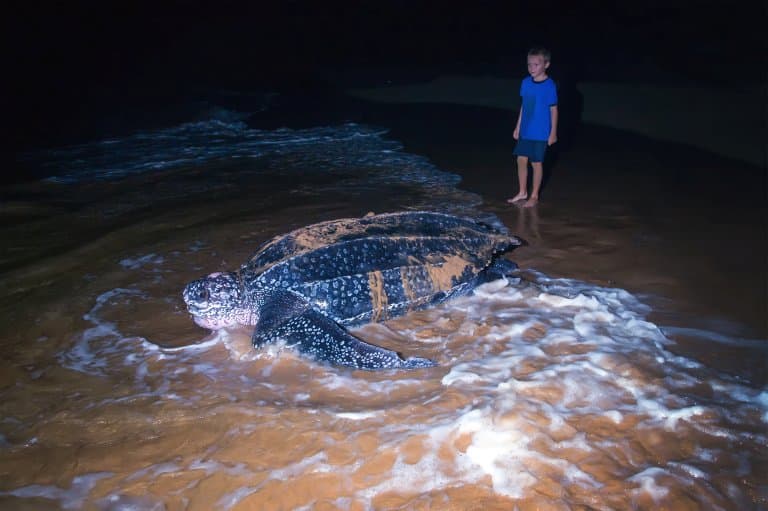 Leatherbacks are well-adapted to doing things other turtles can’t. They have peculiar oxygen storage in their tissues; they have soft, malleable shells, with a different composition than the more rigid protection of their cousins; and they have collapsible lungs.

All of these are adaptations that allow the turtle to migrate to exceptional depths, commonly reserved for the more adventurous mammals like sperm whales.

It’s not known why they do this, but leatherbacks have been known to dive to over a kilometre down, far away from their common food source, and well out of the range of most air-breathing animals.

Some suggest they’re navigating chemical cues to orient themselves in the water column and find potential food sources, but this dive could also be a way of shedding parasites. Much like other gigantotherms, such as the colossal whale shark, the leatherback turtle is capable of maintaining its body temperature in colder waters for much longer than smaller-bodied animals would be able to.

This may allow it to outlast the cold and pressure tolerance of any unwanted hitchhikers the turtle may be carrying, using the deep dives as a cleansing journey. 2 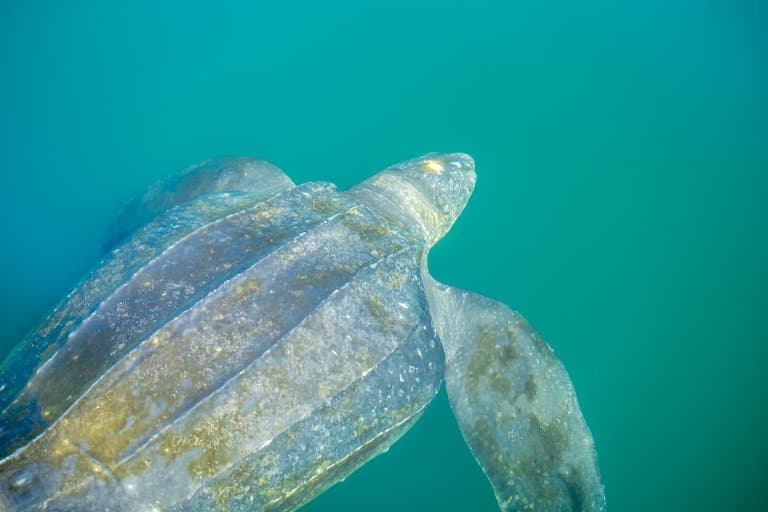 4. Leatherback turtles can handle the cold

They’re not only adapted for the deep but the cold, too!

These turtles can generate their own body heat and hold onto it better than most. This allows them to traverse a wider range of habitats than any other turtle.

They withstand the temperatures by generating heat in their muscles and holding onto it with a thick fatty layer of turtle blubber.

The leatherback’s flippers are huge in proportion to its body, and often reach the full lenth of their sehll.

They are the largest flippers of any sea turtle, and help them move through the water.

The Guinness Book of World Records suggests the leatherback turtle has been verified swimming up to speeds of 35.28 kph (21.92 mph) in the water, which would make it the fastest non-avian reptile. 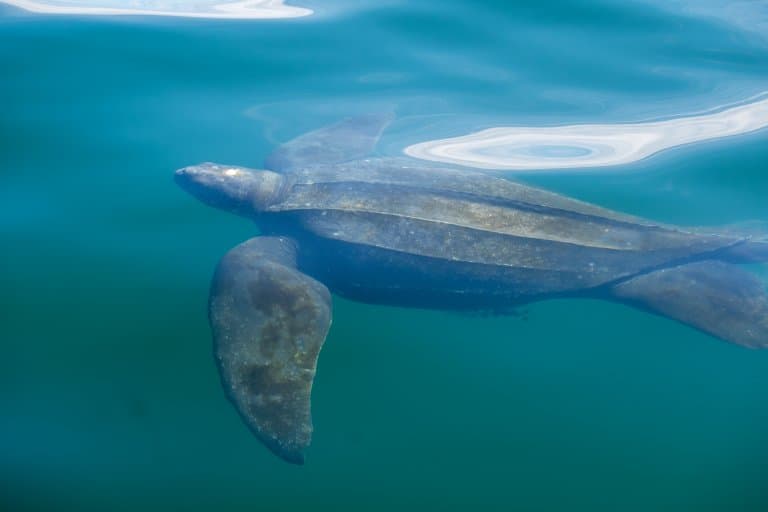 These adaptations allow them to extend further North and South than any other species of sea turtle.

The streamlined body increases their efficiency and helps them reach up to 10,000 miles of swimming every day in any current.

Mature turtles spend almost all their lives at sea. Females mate in the open ocean and nest every one to three years. While they don’t come back to the same exact location every time, like some other species, they do have a preference for certain regions.

Not only are leatherbacks the oldest turtle lineage we know of, dating back over 100 million years, but they’re also hypothesised to have the longest individual life spans among sea turtles.

It’s not known how long they live exactly, and most estimates don’t provide any reasoning behind them, but reproductive longevity is claimed to lie somewhere between 18 and 22 years, and sexual maturity is thought to occur at around 13-20 years, giving them a minimum lifespan of around 42 years, if they’re lucky.

The researchers who came up with these reliable figures do project that leatherbacks could live for upwards of 50 years, but they also concede that greens and loggerheads currently have confirmed longevities higher than the best recorded leatherback figures.

The museum in Wales claims their specimen was 100 years old when it died, but so far, there’s nothing obvious to back this up other than the size of the animal. 3

8. They don’t have any teeth

Instead, the leatherback sea turtle has sharp cutting edges on the upper lip of its beak, and backwards spines in its throat to help swallow food – and stop them escaping when caught.

Leatherback turtles drink seawater. And they eat jellyfish, which are about 95% seawater. That’s a lot of salt for an animal to handle.

Sea creatures who take in a lot of salt require special glands to get rid of it again, and in leatherbacks, these glands are around their eyes.

As such, they cry tears that are twice the salinity of the water around them, removing a lot of the salt from their diets and making them look very sad.

And sad, they should be. Endangered populations of leatherbacks are threatened by a number of things, including the fishing industry. As usual, people are taking more than they should, and turtles commonly get caught up in nets as by-catch.

Their eggs are also stolen by poachers, and hatchlings commonly get confused by bright lights and wander in the wrong direction, away from the ocean.

Other threats are the plastic bags that float about in the ocean indefinitely, closely resembling jellyfish. These can get tangled in the mouths, throats or stomachs of the turtle and suffocate the or starve the animal slowly.

Climate change also affects them. Like some other reptiles, the sex of their offspring is determined by the temperature of the substrate the eggs are laid in. Higher temperatures might result in a disproportionate number of female turtles, making reproduction a lot more difficult.

Recent studies have estimated that global nesting populations of leatherbacks are between 26,000 to 43,000, which has declined significantly from 115,000 estimated in the 1980s.4