There’s an animal that hasn’t changed much since before the invention of the vertebrate jaw.

While other creatures updated and modified their evolutionary approach in response to various changes, this fish stuck with what it knew. A disc-shaped, suction cup mouth ringed with sharp teeth, an elongated, slimy body and a penchant for blood.

This is the lamprey, sometimes incorrectly referred to as the lamprey eel. They are parasitic fish, that are one of the most primitive of all vertebrate species. 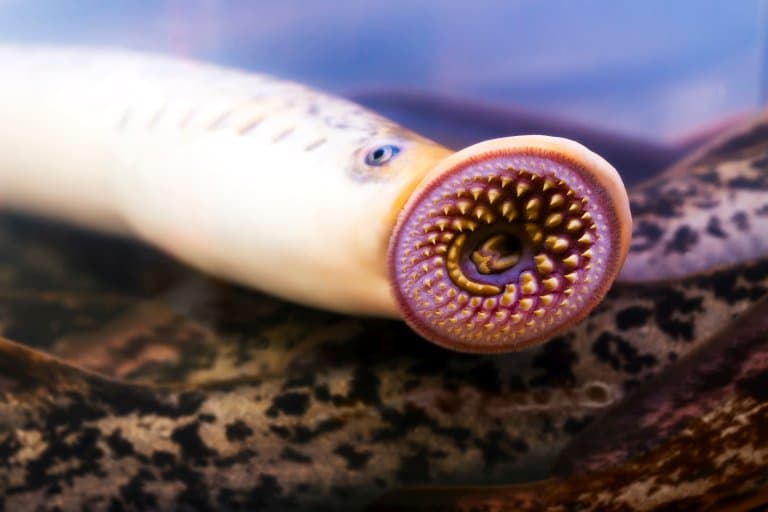 Lampreys are prehistoric tubes of goo that are unable to do what most vertebrates do, and yet somehow have outlasted pretty much all of them.

They’re the perfect example of “If it ain’t broke, don’t fix it”, and they’re still rocking the seas and rivers of the cooler regions of the world after nearly 400 million years.

They have the body shape of an eel and vary between 10cm and 100cm in length.

There are 38 known species of lamprey, and 18 of them are carnivorous – infamous for latching onto fish like salmon, trout and catfish – drilling into their flesh using their teeth, and sucking their blood like a parasite. There are also vegetarian, algae eating only species, too.

Let’s take a look at what makes these animals so special.

Lampreys are members of the taxonomic group called Agnathans, which literally translates to jawless.

Lampreys didn’t evolve to become jawless; they never had one in the first place, and they represent an ancient lineage of jawless vertebrates, which existed before the development of modern gnashers. 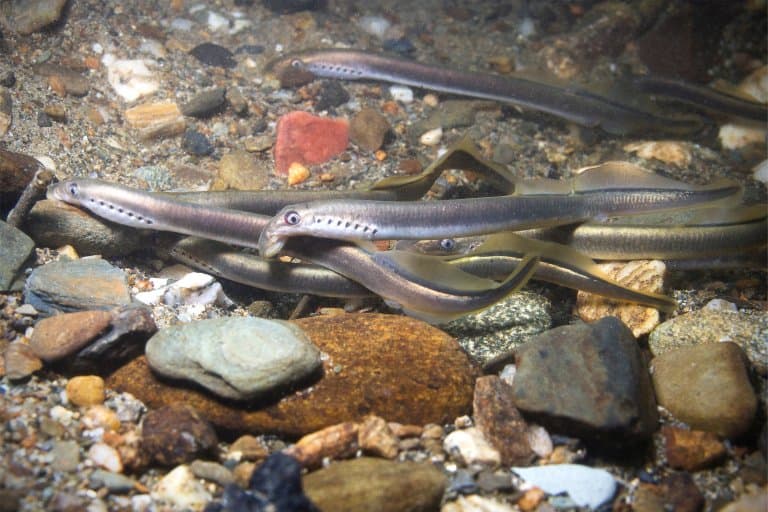 2. They die after reproducing

How these animals have survived for over 360 million years seems like a bit of a mystery when you consider their limitations.

Once they reproduce, the hole their eggs pop out from can’t close, leading them to fill with contaminants and succumb to fungal infections, which ultimately kill them.

3. They don’t have scales or gill covers

These are technically fish, but they don’t have scales.

They’re instead covered in a unique type of skin that’s thought to secrete a distasteful chemical that helps prevent them from being eaten by other animals.

They breath through seven pairs of tiny gill openings located behind their mouth and eyes. 1

4. They don’t even have shells anymore

This defence comes in quite handy because unlike their ancestors, lampreys don’t have much else in the way of protection. Back in the day, though, the Agnathans used to be heavily armoured.

Lampreys have evolved to shed this protection in favour of more flexibility, which probably helps them with their parasitic life choices.

5. They have no paired appendages

These fish don’t even have limbs really.

They’re so unrelated to jawed vertebrates that they don’t even possess the characteristic arms, legs or fins that are present in various forms in their masticating counterparts. 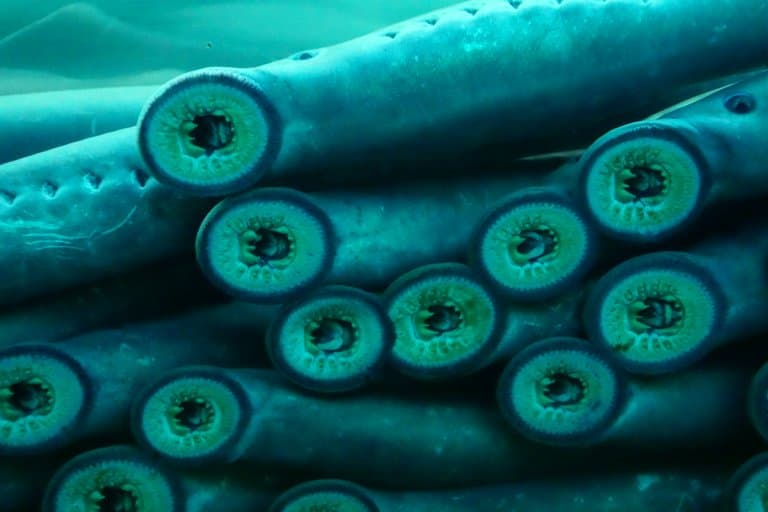 6. They have no bones

Lampreys don’t even have a proper skeleton, and instead, make use of a cartilaginous notochord and gill basket. This helps create more neutral buoyancy, because, as you may have guessed, they don’t have a swim bladder either.

We’re still not sure whether bone predates cartilage as a skeletal strategy, but their innards do seem to represent a particularly archaic blueprint for rigidity in early vertebrates. 2

Despite living in water, their propulsion methods aren’t traditional.

Instead of pushing water aside, as is the classic mechanism involved in swimming, they contort their bodies in a way that creates negative pressure vortices in front of them, pulling their bodies into the vacuum space. 3

8. They have poor eyesight

Because of course they do. These fish seem to be lacking in almost every department, but don’t be fooled! These are highly specialised creatures, and what appear to be handicaps may actually be the root of their success throughout the time they’ve existed.

Despite being called nine-eyed eels in more than one language, they can’t see much. This name refers to their seven undulating gill holes that line up with their eye and nostril on each side.

Technically this would give them eighteen eyes, but who’s counting? Time to look at what they do have… 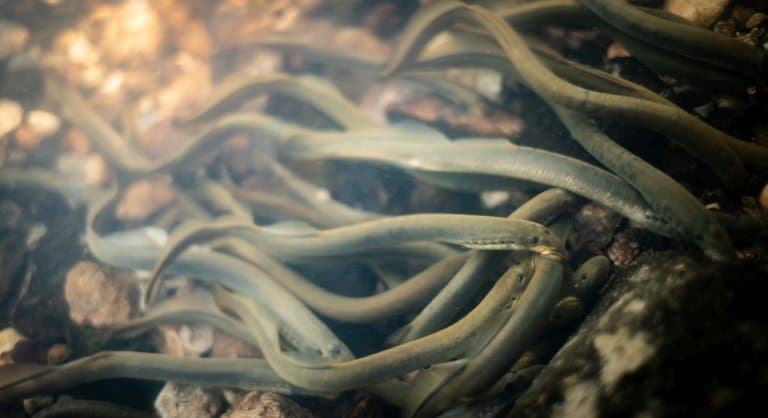 Lots and lots of slime. The skin of a lamprey has specialised cells that secrete mucous as a defence mechanism.

While not as horrendously slimy as their close relative the hagfish, lampreys are particularly gooey, and this mucous not only makes them hard to catch but also contains toxins that make them dangerous to eat.

It’s formed in special cells that are highly-productive versions of those found in the skin of other bony fish and amphibians.

Around 150 cone-shaped, sharp teeth as part of a suction-cup, malleable mouth with a central, rasping tongue. Even their tongue has teeth. The toothed suction cup latches onto their prey, and the sharp rasp scrapes away the outer scales and flesh.

From there, they feed on the blood and fluids of their unfortunate victim.

In this way, their prey is slowly eaten alive. Only one in seven fish attacked by lampreys will escape with their lives. Larger fish can survive, but are left with severe scars – and can die later from infections to their wound.

These teeth form a grotesque oral disc and contribute to their alien appearance. They’re made of hollow keratin, and as they age, new, sharp teeth grow in from underneath.

11. They use their suction skills to travel

Not only are their suction capabilities useful for dieting on fish, they are useful for traveling upstream in the water as well.

Lampreys will use their suction mouths to cling onto rocks, and help them navigate upstream to feed on algae, or to breed. 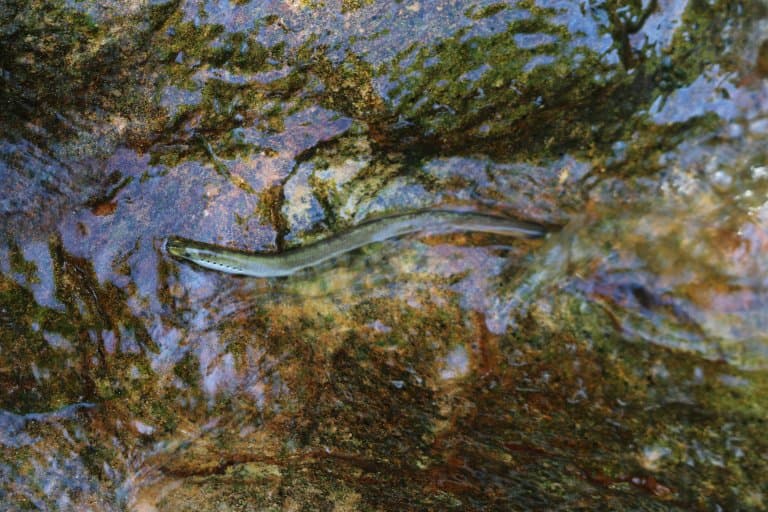 12. They have a keen sense of smell

The lamprey’s sense of smell is so good they’re often referred to as swimming noses. Not by many people, mind you; you’d have to be pretty into lampreys to give them a nickname.

Researchers working with lampreys understand that the sense of smell mediates many behaviours in this animal, and can be used against them.

In attempts to control invasive populations of parasitic lampreys, chemical repellants are being proposed, these odourants can potentially be placed at river junctions to deter migrating lampreys from entering and invading lakes.

In other areas, the species are native and extinct or threatened, so the same principle could be used to encourage their dispersal. While lampreys are invasive to the Great Lakes region in North America, they’ve been almost wiped out of their natural habitat in the UK.

13. They can occupy saltwater and freshwater

Lampreys inhabit cool waters both in the sea and in freshwater rivers and lakes.

Many species can move between the two over the course of their lifetimes, being born as larvae in the freshwater and migrating to the sea, from where they will return to spawn.

Back in the 12th Century, lampreys were pretty popular as a food source.

King Henry I of England loved them so much that when he died, his physician blamed an excess of lampreys on his demise. 4 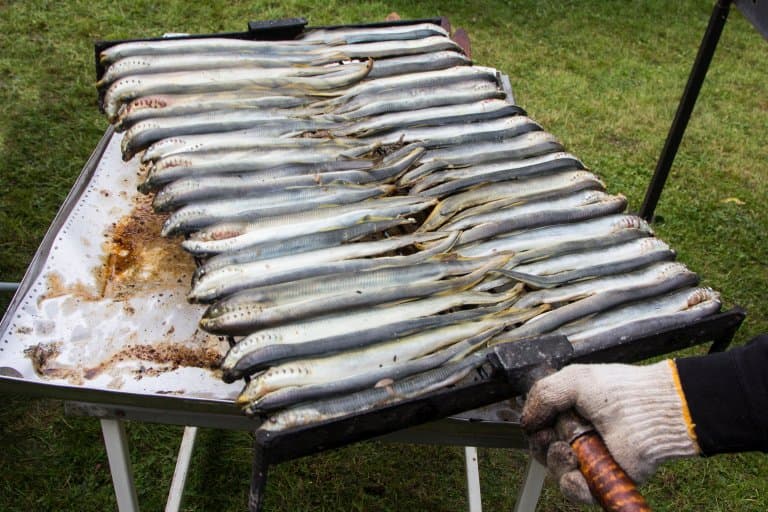 15. They seemed to be popular with the Romans

Lampreys have been a favourite food of the elites for centuries. Ancient Romans would farm them, keep them as pets and eat them at banquets.

The Roman equivalent of a Bond villain, Vedius Pollio kept a vat of lampreys, to which he fed slaves who upset him. The great philosopher Seneca tells of one such case that so upset the emperor Augustus, he had the slave freed and the pit filled in.

Despite these tales, lampreys present no threat to people in the wild. 5

Despite all their shortcomings, or perhaps as a sign of just how efficient these animals are, lampreys have outlasted almost every other animal alive today.

Their evolutionary strategy may seem primitive, and it is, but it’s here today because it worked. Lampreys have survived three ice ages and five mass extinctions relatively unchanged and this deserves some recognition. 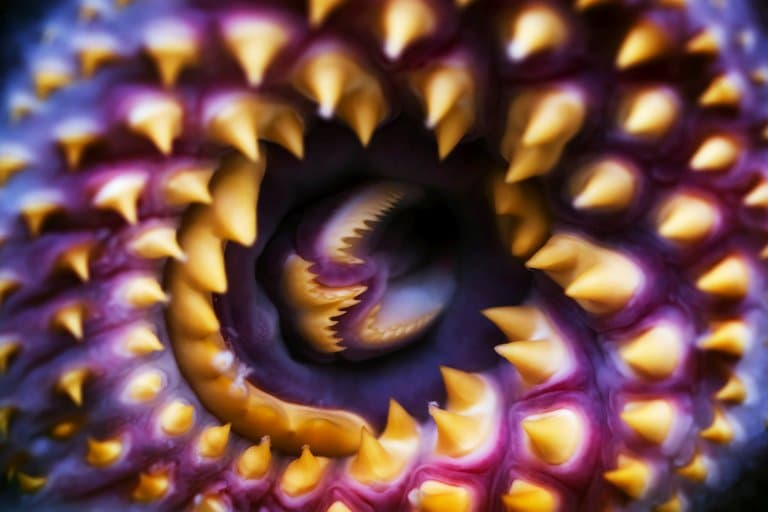