Komodo dragons are large, muscular lizards that are known for their armored skin and massive size – they can grow up to 3 meters (10 feet).

Not officially described scientifically until 1912, Komodo dragons are versatile predators, feeding on everything from deer and pigs to small birds and other reptiles. 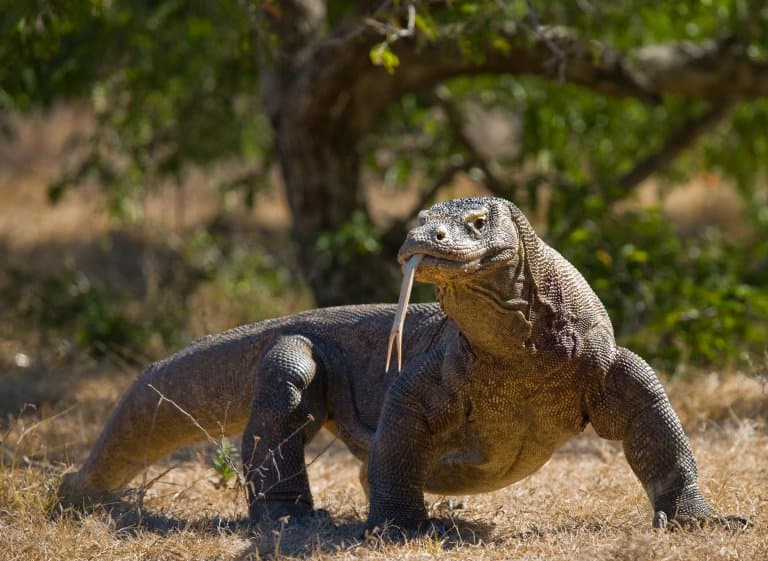 Their elongated bodies and powerful limbs allow them to easily switch between terrestrial, arboreal, and aquatic habitats.

Among lizards, Varanidae are the largest, in both body size and the number of species. There are an estimated 50-60 species in the genus, including the Komodo dragon. These monitor lizards have long forked tongues that are reminiscent of a snake’s tongue, and hard scales covering their entire body.

Komodo dragons are solitary, coming together only to breed and eat.

Mating begins in May for Komodo dragons, and they can lay up to 20 eggs in a nest at a time. The eggs are incubated for 7-8 months, before they are born.

Komodo dragons are apex predators, meaning they are at the top of their food chain. While humans can be considered a threat to Komodo dragons, this has more to do with loss of habitat than hunting.

As of 2021, the Komodo dragon has moved from vulnerable to endangered in the IUCN Red Lest of Threatened Species. This move is mainly due to climate change and the rising sea levels. There are an estimated 1,400 mature Komodo dragons left in the wild. 1

1.    Komodo Dragons are only found in one country

Komodo dragons call five small islands in Indonesia home. This makes them the predator with the smallest home range in the world. Four of the five are found within Komodo National Park. These islands have a rugged terrain—covered with forests, hills, grassland and beaches. 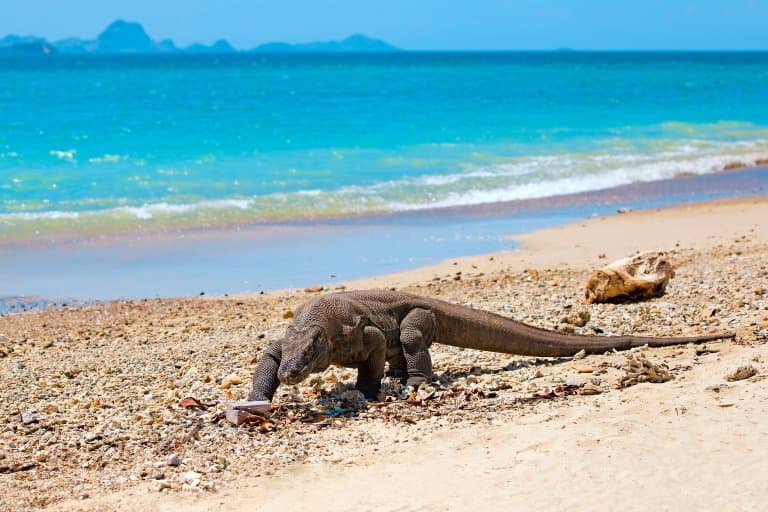 2.    Research suggests that they may have originated from Australia

According to various studies, there is fossil and DNA evidence, dating back roughly 4 million years ago, that suggests that Komodo dragons originated in Australia. Fossils have been found throughout eastern Australia that are nearly identical to today’s Komodo dragons. 2

3.    The Komodo dragon is the largest living lizard

While they aren’t quite as large as the dragons of fairytales or their ancient ancestors, they’re much bigger than the lizards typically found roaming the garden. Most Komodo dragons can grow to the length of a small car.

One thing that helps contribute to its length is the size of a Komodo dragon’s tail. The tail is nearly as long as the body—and just as strong too!

Often acting as an extra limb, the tail It is strong enough to take down a deer with a single whip!

Though male Komodo dragons tend to grow larger than females, there is virtually no morphological differences to tell them apart. Not only do researchers have a hard time determining sexes, but the dragons themselves appear to have trouble figuring it out.

Determining the sex of an animal is especially important for captive breeding programs. One subtle hint is a scale pattern difference near the cloaca; however, this isn’t always consistent. In captivity, researchers will use DNA technology for sex determination. 4

These monitor lizards are considered to be one of the most efficient eaters in the animal kingdom. Most large carnivores tend to like up to 30 percent of their kill unconsumed.

Komodo dragons, on the other hand, consume about 88 percent of their prey, including the bones, hooves, hide, and intestines. 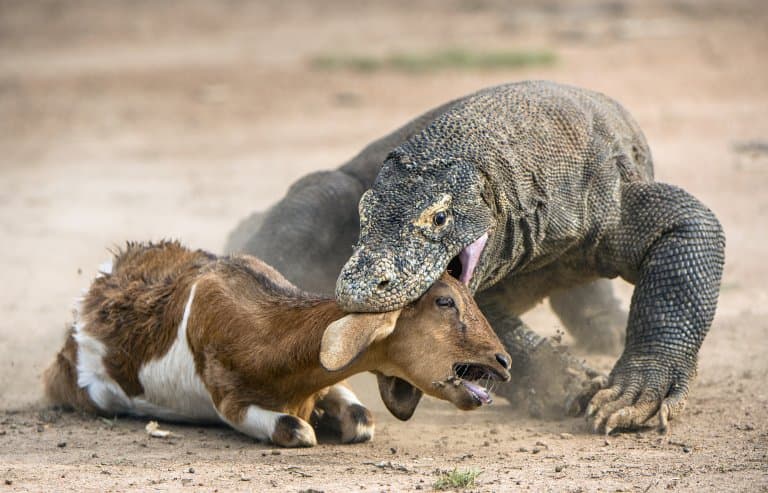 7.    They can go through four to five sets of teeth in their lifetime

Komodo dragons have 60 razor sharp teeth that are meant for tearing off large chunks of flesh. As the bite, teeth will often become damages or lost. However, these teeth are constantly replaced.

A Komodo dragon can grow through as many as five sets of teeth in their lifetime.

As one of the few venomous lizards on the planet, a Komodo dragon bite is not something you would want to incur. When the lizard bites into its prey, venom seeps into the wound through ducts that are located between the teeth.

This venom has coagulopathic, hemorrhagic, and shock-inducing toxins. If the initially bite doesn’t take down their prey, the dragon will trail behind its dying victim, waiting for the venom to eventually take it down. 5

Mature Komodo dragons have been known to cannibalize juvenile monitors within their species.

To prevent this, young dragons will often roll in the feces of adult dragons to take on their scent. Young dragons are also more arboreal (live in trees), whereas adults usually stick to the land and water.

10. They have an excellent sense of smell

Komodo dragons uses their sense of smell as their primary food detector. They use their long, forked tongue to sample airborne molecules.

This can tell them everything from how far away prey may be and which direction it is headed.

Most reptiles are limited when it comes to agility. However, monitor lizards have a genetic adaptation that gives them increase aerobic capacity.

Komodo dragons have a metabolism more like that of a mammal, allowing them to move faster when hunting prey. When going after a kill, a Komodo dragon can typically reach speeds of 13 mph. 6 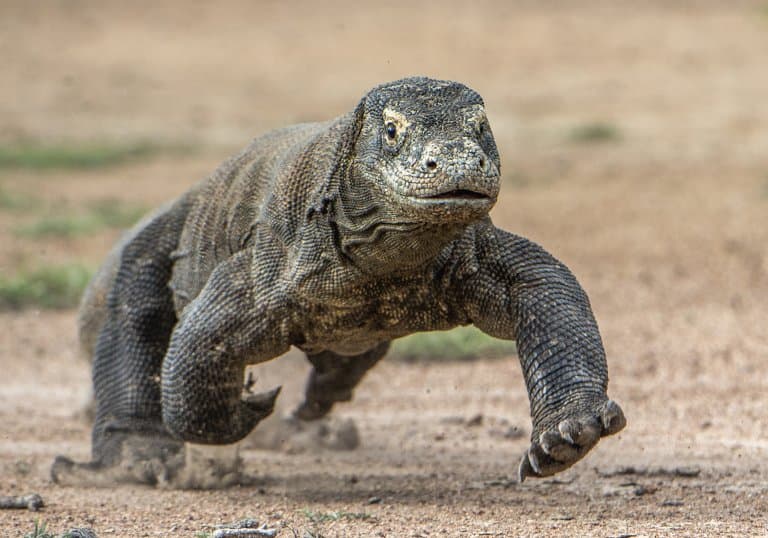 Not only do they move fast on land, but they are excellent swimmers.

They have been spotted miles offshore and are known to swim between the five islands they reside on.

13. Even though they can run, they prefer to use a stealth-based hunting strategy

Komodo dragons are better designed for strength and power over speed and endurance. It’s not often that you will see a Komodo dragon chasing down a deer or wild board.

Their hunting strategy typically consists of sitting and waiting for prey to cross its path before launching and attack. Even then, many of the dragon’s attempts are unsuccessful, leaving it up to the venom to finish the job a few days later.

14. Their exterior acts as a permanent suit of armor

Komodo dragons are known to be aggressive, not only with potential prey, but also with each other.

Under the skin, Komodo dragons have thousands of tiny bones called osteoderms.

These are hard deposits that develop throughout the dragon’s lifetime. As apex predators, there isn’t much these lizards need protection from. This built-in chain mail acts as a form for protection from other Komodo dragons. 7 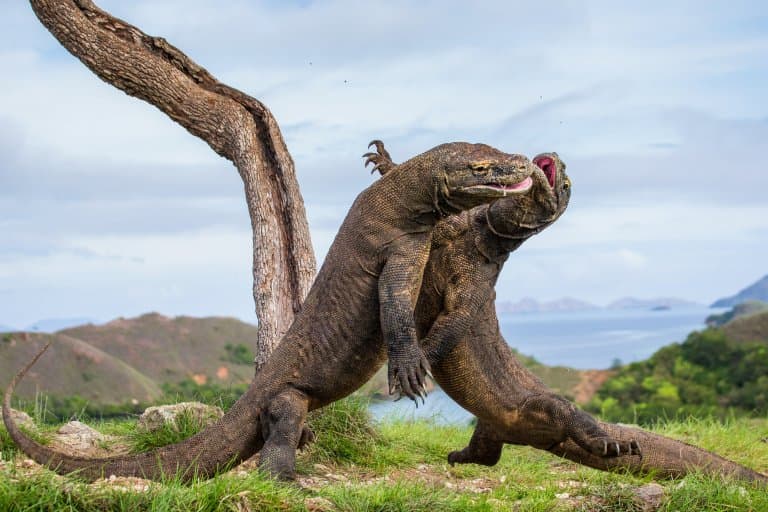 15. Varanids are the smartest among lizards

Species within the Varanus genus are known to have more intelligence than other lizards. Among them, Komodo dragons are thought to be quite intelligent.

Keepers at the Smithsonian Zoo have found that individual Komodo dragons can recognize different keepers. They will even exhibit curiosity and playfulness.

16. They can reproduce asexually

Komodo dragons can reproduce asexually through a process called parthenogenesis, which means the female can lay eggs without the help of a male to fertilise them.

Only around 70 species in the world have shown this behaviour. 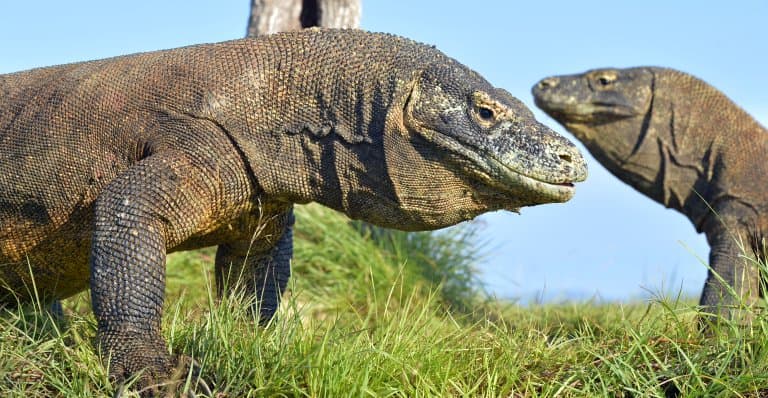 The 1933 movie King Kong was inspired by an expedition to Komodo Island by W. Douglas Burden in 1926, where they captured two live komodo dragons.

18. Attacks on humans are rare, but do happen!

Komodo dragons generally avoid contact with humans. However, there’s been 24 reported attacks on humans between 1974 and 2012, with several fatalities.

Most of the victims are local villagers living close to the national parks.

19. Climate change is a major threat to their survival

Increasing temperatures and rising sea levels are problematic for the komodo dragon, as they do not inhabit higher altitude regions of their islands.

Some projections have estimated a 71% loss of komodo dragons by 2050, while other scientists have argued against these conclusions.

Ongoing conservation efforts and protection will be paramout for the survival of the species.