The king cobra is an elapid species of venomous snake that is exclusive to the rainforests of Southern and Southeast Asia. It is distinct from other cobras, most notably by its size and neck patterns, and is the only member of the genus Ophiophagus.

King cobras are known to live in several different habitats across India, southern China, and Southeast Asia. These can include rainforests, savannahs, grasslands swamps, and even rivers. 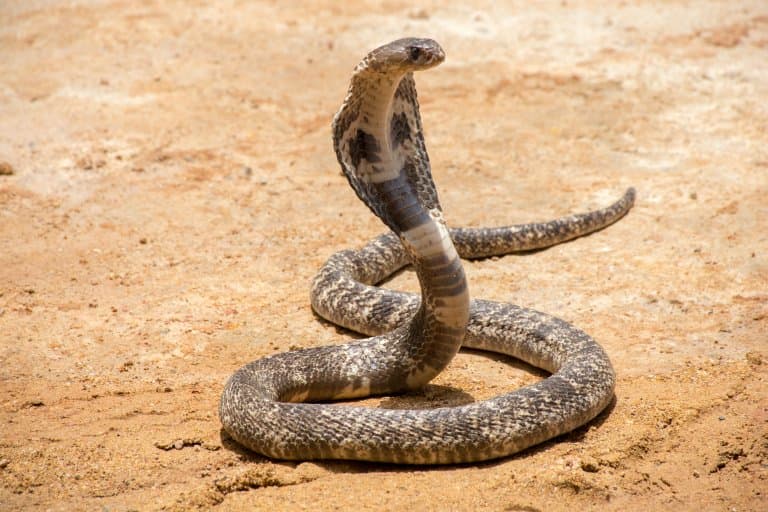 King cobras are found in various shades of red, yellow, black, and orange depending on the area in which it lives. They have designs on their scales that can vary as well, displaying as mottled colors, bands, and various other patterns.

They have hollow fangs at the front of the mouth that are fixed to the upper jaw. Because they don’t have the jaw strength to hold their prey down with their fangs, they will inject venom instead. They have an infamous neck-flap and ‘hiss’ as a threat display and mainly prey on other snakes, including their own species.

King cobras are oviparous and lay 21 to 40 white, leathery eggs. Breeding usually occurs from January through April with incubation taking place during spring and summer and hatching in the fall.

When they hatch, baby cobras are totally self-sufficient. The 12-inch king cobra hatchlings have vivid yellowish bands running the length of their bodies, alerting potential predators to their lethal venom. As the snakes age, this patterning starts to disappear.

Currently, the king cobra is listed as vulnerable by the IUCN since 2010, with the population trend decreasing. Their greatest threats seem to be the logging and wood harvesting that is happening in Southeast Asia and a continuing decline in mature individuals within the species. 1

There is some debate over what exactly a ‘cobra’ is. Depending on how a cobra is classified, there are between 28 – 270 different species of cobra.

Genetically, “true” cobras are members of the genus Naja.

However, a variety of snake species, the majority of which belong to the venomous Elapidae family, are frequently referred to as cobras.

Other snakes like coral snakes, kraits, mambas, and the king cobra are included in this. 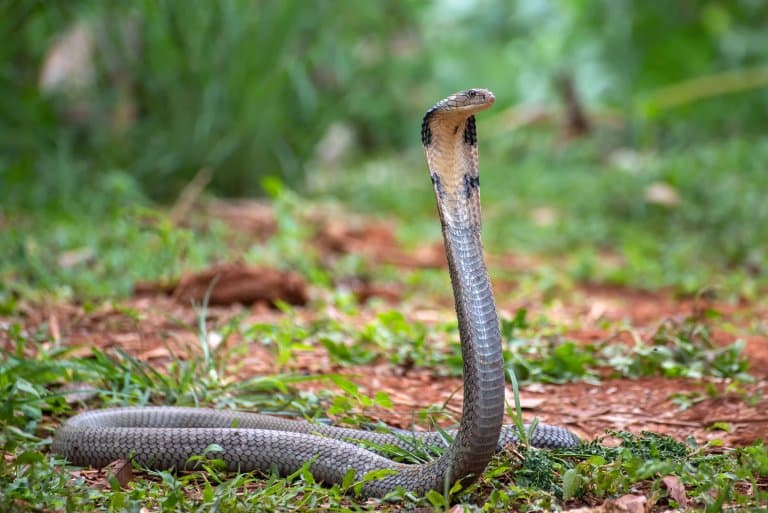 2.    The King Cobra is the Longest of All Venomous Snakes

The king cobra is the longest venomous snake of the hundreds of species that exist in the animal kingdom. When a cobra “stands,” it can be eye to eye with a human of average height.

King cobra snakes maintain consistent growth throughout their lives. The venomous snakes, according to experts, can grow over 18 feet long, with an average length of 10 to 13 feet. The largest known king cobra was captured in Thailand and measured 5.59 m (18 ft 4 in) long.

In contrast, the longest non-venomous snake, the python, can reach lengths of 20 feet.

3.    Their ‘Neck-flap’ Hoods Are Actually Ribs

Some people think that king cobras always wear flared hoods. But that’s not the case. A king cobra’s unique hood flares around its face when it is defending itself as a threat display.

This appears to be a piece of the snake’s skin at first, but it’s actually a system of movable rib bones and muscles. The king cobra hisses and “stands” up, spreading its ribs and fanning out its hood to make itself look bigger and more threatening when it feels attacked. 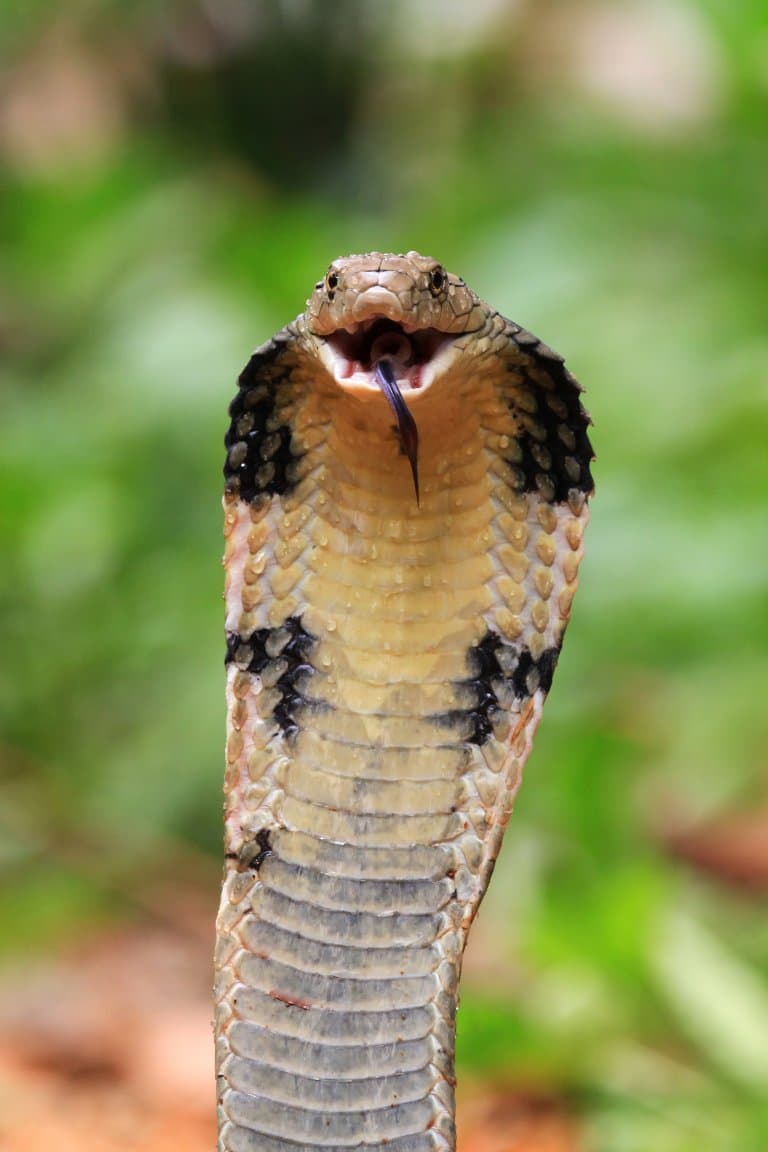 These snakes have a lifespan of over twenty years in the wild.

They are less vulnerable to droughts, food shortages, and other natural disasters than other animals and reptiles may be since they can go for extended periods of time without eating and don’t need much water.

5.    Their Venom is a Deadly Neurotoxin

Poisonous snakes usually produce one of two types of venom: neurotoxin or hemotoxin. Any poison that directly affects a person or animal’s nervous system is referred to be a neurotoxin. This is the type of venom that is released with a king cobra bite.

On the other hand, hemotoxins damage the bloodstream and are typically the kind that is present in vipers and rattlesnakes. 2

6.    Each Bite Has Enough Venom to Kill an Elephant in 3hrs

A very small amount of a king cobra’s neurotoxic venom is released when it bites.

This tiny amount has the power to paralyze its prey and can even kill a human within minutes after being bitten.

It is so deadly, in fact, a huge animal, like an elephant, can pass away within a few hours of sustaining a bite. 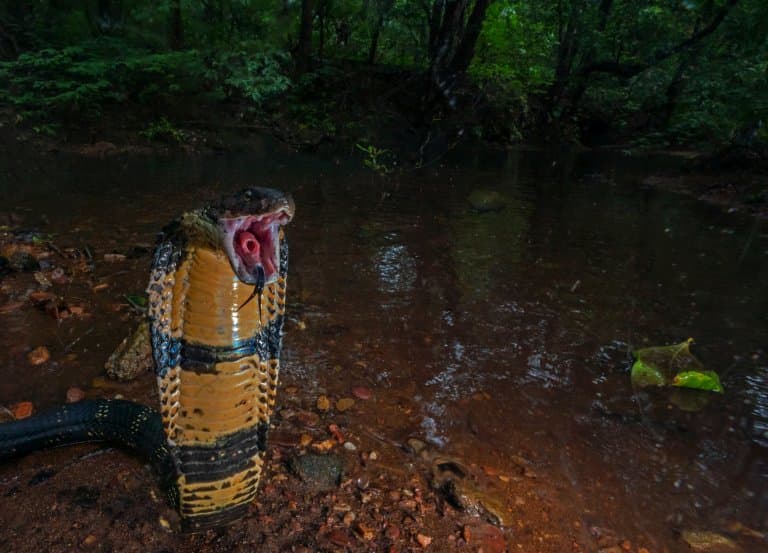 7.    Pain Relievers Have Been Derived from King Cobra Venom

This is possible due to a protein in king cobra venom that reacts with the central nervous system. More research is being done on the different enzymes found in snake venom, and their potential therapeutic uses. 3

8.    Their Biggest Predator is the Mongoose

Despite being barely a foot long, this small animal is resistant to the venom of many snakes. The mongoose is a carnivorous animal that typically consumes tiny rodents like rats but has also been known to attack and kill poisonous snakes. They can quickly navigate around opponents and launch multiple attacks because of their high level of agility.

Normally, a mongoose won’t seek or pursue a cobra on purpose, but it will protect itself if it feels threatened.

One of the reasons the ‘king’ cobra got its name is because it is known to eat other cobras. So it’s the ‘King’ of the cobras.

In fact, king cobras prefer to prey on snakes above all other animals.

However, if there aren’t any snakes around during feeding time, cobras will also go after lizards and small mammals.

When threatended, king cobras will spread their neck-flap to make themselves look bigger, raise their heads off the ground and ‘hiss’ with a very low pitch that is actually more like a growl.

This lower sounding frequency is much closer to that of a human voice growl.

11.    They Can Go for Months Without Eating

After a large meal, the king cobra is able to survive for months without another meal due to its slow metabolic rate.

12. They Can Flatten Their Bodies to Swim

Though king cobras aren’t considered aquatic snakes they are found in the water quite often.

To swim, king cobras will flatten their bodies and serpentine across the surface of the water. They are quite decent swimmers, sometimes moving even faster than boats.

13. They Are the Only Species of Snake To Build Nests

The female king cobra is the only snake that builds and guards a nest until its young are born.

To protect her eggs, mother king cobras construct intricate nests made of various types of vegetation and branches. She then watches over them until they hatch. While the mother is out hunting for prey, some male king cobras will even assist in protecting the nest. 4

14. Baby King Cobras Are Just as Venomous as Adults

Don’t be fooled by the size of a king cobra hatchling. They may be small, but they can produce just as much venom as an adult king cobra.

Adult cobras would rather not waste their venom on defense, but the babies are a different story. Because they are so small and vulnerable, they are much more nervous and aggressive and more likely to bite.

15. They Shed Their Skin Five Times A Year

Due to the fact that they never stop growing, king cobras will shed their skin around five times a year.

This is done so that their body can adjust to the prey it swallows.

The ground isn’t the only place you need to be on the lookout for king cobras.

These snakes are highly adaptable and are known to climb trees and even take a dip in the water. Regarded as one of the fastest snakes in the world, a king cobra can reach speeds of up to 12 mph.

17. They Are Considered Feared Deities in Some Countries

Many Asian countries have myths and legends centered around king cobras. In Hindu mythology, the naga are semi-divine beings that are half human and half cobra. These beings live in an underground kingdom and only bite the truly evil.

In India, it is also said that if you kill a king cobra, its mate will hunt you down and take revenge.

King cobras are considered the national reptile of India. 5

18. They Are the Smartest Snakes in the World

Experts have named the king cobra the smartest snake in existence.

With their outstanding hunting techniques, these poisonous snakes frequently watch their prey’s daily activities before waiting for the ideal opportunity to strike.

They also use different hunting techniques for each animal species they eat.

19. They Were Used Historically By Snake Charmers

Snake charming is the practice of appearing to hypnotize a snake, often a King Cobra by playing a Pungi (a flute-like instrument). This practice exists today, but is larely dying out.

During a peformance, a snake charmer will typically take a number of precautions, such as sitting out of biting range, starving the snake, or even removing its fangs and venom glands.

According to studies from the Deparment of Clinical Toxinology at the University of Adelaide. However, they rarely attack people without provocation, and cause fewer than 5 human deaths a year.

While serum can be used to avoid a king cobra bite being fatal, victims don’t always live close to a hospital or have any knowledge of snakes – which make a misplaced step potentially fatal.