The word kakapo translates to mean night parrot and that essentially describes this unusual bird. Also called the owl parrot, this is a species of large, nocturnal, flightless and ground-dwelling parrot.

The kakapo is the world’s only flightless parrot and one of the longest-living birds.

It’s native to New Zealand, living in island forests. It’s critically endangered and currently there is a huge effort by New Zealanders to save it from extinction. 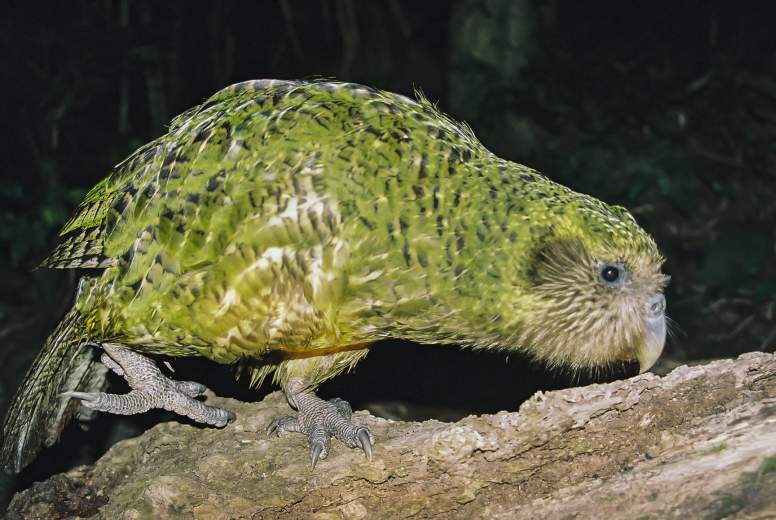 The kakapo is a chubby-looking bird that has a rather funny appearance compared to other parrots, and other birds in general. It has a large grey beak, short legs, large feet, short wings and a short tail. It also has a finely blotched yellow-green plumage with an obvious facial disc of whiskers.

As if these traits didn’t make it already unique among its kind, the kakapo also happens to be the world’s only parrot that cannot fly. They inhabit the forest floor, scrublands and coastal areas.

It is also quite possibly one of the world’s longest-living birds with a lifespan up to 95 years, with the oldest recorded at reaching 125 years.

Kakapo are nocturnal herbivores that feed on a variety of native plants, seeds, fruits, pollen, and even tree sapwood. In particular they love rimu fruit, supplejack vines and orchard tubers.

The kakapo once existed throughout New Zealand in many different habitats including scrublands, tussock lands and coastal areas. It also could be found in forests, but is now just confined to islands free of predation and have adapted to the regional climate.

The kakapo has been ranked by the Department of Conservation as ‘Nationally Critical’ and as of 2022, the entire adult population was just 252 living parrots.

The kakapo was almost completely wiped out during European colonization where cats, rats and ferrets were introduced to New Zealand.

At one point, the kakapo population had dropped to 49 birds. Those were extremely inbred and as a result had low genetic diversity. This translates to mean that these birds would have low disease resistance and fertility issues. In fact, 40-percent of kakapo eggs are infertile.

In 2015 the Kakapo 125 project began aimed to sequence the genome of all living kakapo birds.

1. They are the only parrot in the world that cannot fly

Kakapo have short wings for its size and are lacking the keel on the sternum (breastbone), where the flight muscles of other birds attach to allow them to fly.

2. The kakapo is the heaviest parrot in the world

The kakapo is the heaviest parrot on earth. Some can weigh as much as 4 kilograms.

Unlike many other land birds, the kakapo can also accumulate large amounts of fat. They can pile on up to 1kg of fat prior to the breeding season. 2

3. It is the only parrot to have polygynous lek breeding

During breeding season males will travel 4 miles to a special area for their breeding activity to take place in order to find a mate.

In the special area, the males will create a place where they will sit waiting for a mate to arrive.

The kakapo male will dig a 10 centimeter deep bowl to sit in, often at the bottom of a rock face, tree trunk or other ground features.

To attract females, the male will then make loud low frequency calls known as ‘booms’. They are so low in frequency that they can travel up to 3 miles.

The surrounding features of the area, including rock faces, help to reflect the sounds and the bowls the birds sit in act as amplifiers to attract females.

4. Their mating calls can be all night long

The male kakapo will use not just the low frequency ‘booms’ but also high-pitched ‘chings’ and will continue to make these mating calls for up to 4 months. During this time, they will try and mate with multiple females.

Their calls can go on for up to eight hours in a single night.

5. Males are not active parents, or partners

No pair bond is formed between males and females, they meet only to mate. After copulation the female will return to her home territory to lay eggs and raise the chicks.

A total of between one and two eggs will be laid. They will hatch after 30 days but are guarded before that by the female who will only leave them at night to seek food.

6. Kakapos mate once every four to five years

This means they breed less than many other birds, which also doesn’t help their survival.

7. They are also called the ‘owl parrot’

The legs of this parrot are large, scaly and muscular. It is because of the way in which their legs have developed that kakapos are excellent climbers and hikers with a rapid “jog-like” gait.

They are able to ascend to the canopy of the tallest trees simply by climbing.

While they are flightless, they are able to use their wings as a sort of parachute to descend down from the treetops to the forest floor.

10. The kakapo will freeze in order to avoid being seen by predators

When something frightens this bird, it can’t fly away so instead, it will freeze and stay in one position to try to blend into the surroundings.

It is an effective defense mechanism that has worked against many predators.

11. They have an acute sense of smell, and whiskers

These both aid them in their nocturnal lifestyle.

They are able to distinguish between different odours when foraging for food at night, which has only been recorded in one other species of parrot.

Their whiskers are believed to help them feel the way in the dark forest. 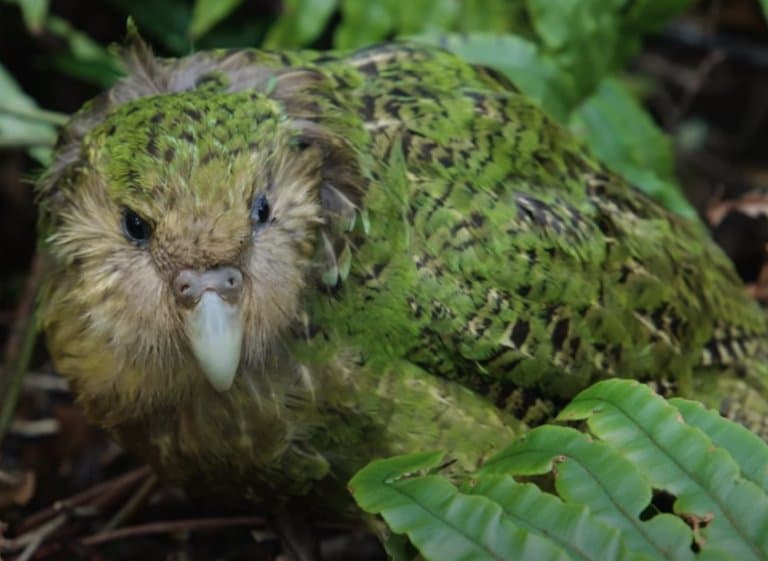 12. Kakapo have a musty-sweet odour

It’s thought that the kakapo use this as a sort of GPS to find each other.

The downside to being a musty-sweet smelling bird is that you also attract predators that find that smell not just interesting, but an indicator of something that will also taste good!

13. Kakapo are intertwined in Māori folklore and beliefs

Māori to credit the bird with the ability to tell the future, as they witnessed the birds preserving berries into water to help preserve them. This practice was replicated by Māori.

The meat of the kakapo has also been considered a delicacy for the Māori for centuries. Their feathers are used to make pieces of clothing and on occasion, kakapo were kept as pets.

Now that they are protected, none of those activities continue – at least, legally.

14. They’re possibly one of the longest-lived birds

Kakapos live life at a slow pace, and possibly age well too. They are also possibly one of the world’s longest-living birds, with some reports suggesting a lifespan between 90-100 years. Other estimates are around 50-60 years, which is still rather good for a bird! 3