There’s an insect in the forests of Central America that sends very mixed signals.

It’s related to a dung beetle, can communicate in multiple languages, and uses very bright and unnatural colouration to blend into its environment. 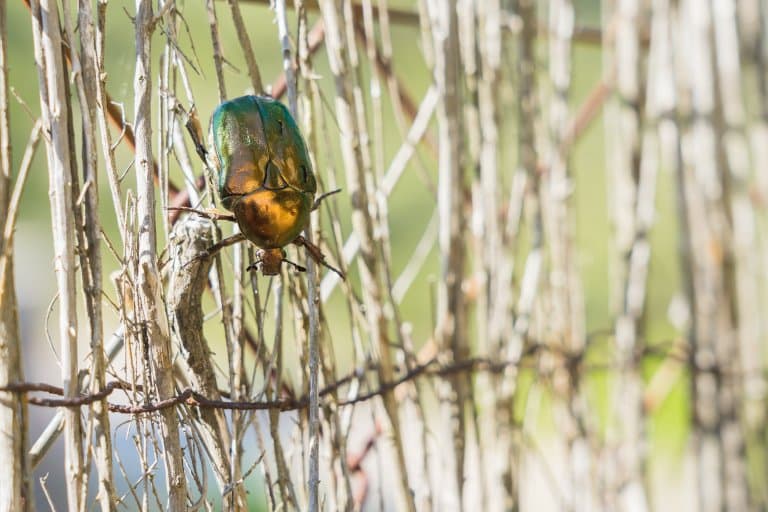 Jewel scarabs are teaching us a lot about the structure and function of complex biological materials.

Their larvae feed on rotting wood, while in adult form they prefer to eat plant leaves, particularly those in the forests such as pine, juniper and oak.

Their shell is made of layers multiple different properties, leading to a bizarre set of reflections that intuitively seem like they would cause more harm than good.

Yet, the more we investigate, the more it seems apparent that this beetle is using a very complex and effective series of signals to dazzle, attract, and camouflage, all at the same time!

1. You can polish a turd

Or at least, a turd beetle. Many of the 30,000 beetles in this family are adapted for digging. They have thick, stocky hind legs, and the use them to make burrows, into which they will roll their favourite balls of poo.

Scarabs are very often dung beetles. And this fact didn’t perturb the ancient Egyptians, who considered the sacred scarab (a relative of jewel scarabs) to be a symbol of ‘transformation’, or, ‘coming into being’.

This is on account of their misunderstanding of its reproduction: they believed the sacred scarabs were all male and would reproduce by injecting sperm into a dung ball.

So, the cousin of these jewel scarabs had a heck of a reputation. It might be this that inspired jewel scarabs to take a different path. If a poop inseminator can be this glamorous, imagine what a high-society version could look like!

And so it is; unlike their dung-rolling cousins, jewel scarabs reflect even more and different light. They have a much more palatable diet of vegetation and keep their feet clean by sticking mostly to the trees and branches of the exquisite forests of Central America. 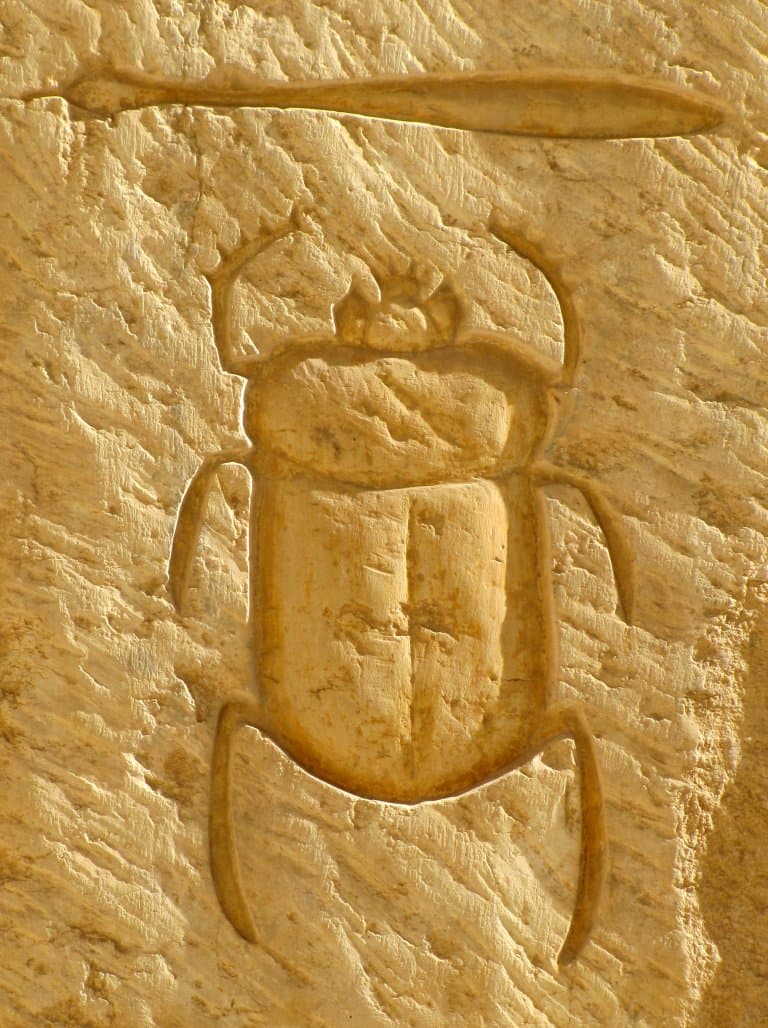 2. These beetles can reflect a lot of light

Mirrors commonly reflect up to 95% of the light that hits them, and the Costa Rican C. aurigans has been shown to match that reflectivity.

This is a particularly shiny species, bright gold (hence the Au in its surname), and it’s not the only one!

These beetles are exceptional in their ability to reflect light, and we’re not sure why they do it. But it isn’t just the amount of light that’s reflected that makes them unusual, it’s also the quality of it. 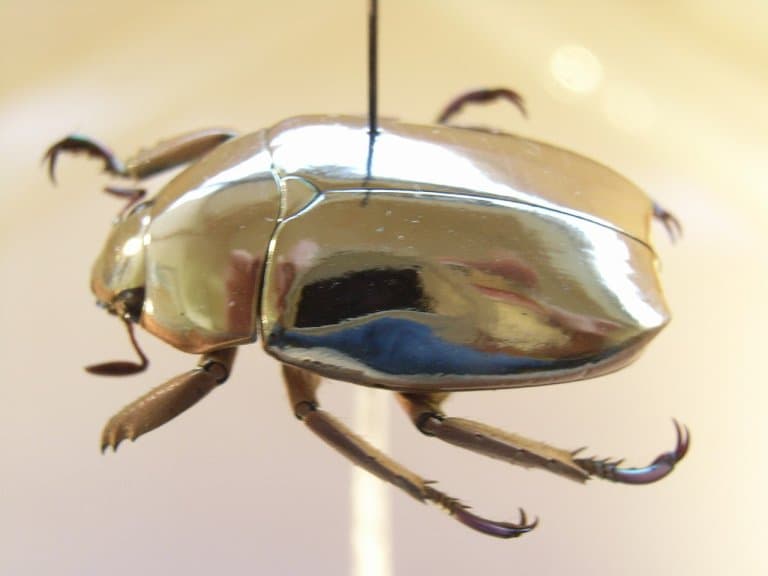 Reflectiveness is one thing, but the directions of the oscillations of that light is also significant.

Polarization gives a measure of which way the light wave is oriented as it passes through space, and for us, it doesn’t matter a lot.

While humans can see some effects of extreme polarisation, we aren’t particularly sensitive to it. To discover the quality of light coming off these jewels, scientists had to use special instruments.

And when they did, they discovered something very unusual.

While many animals reflect polarised light of one form or another, Chrysina resplendens appears to be able to reflect circular-polarised light in both left and right-handed forms.

This is an incredible feat for any material, let alone any animal, and seems to be the first example of such luminous complexity so far discovered in nature. 1 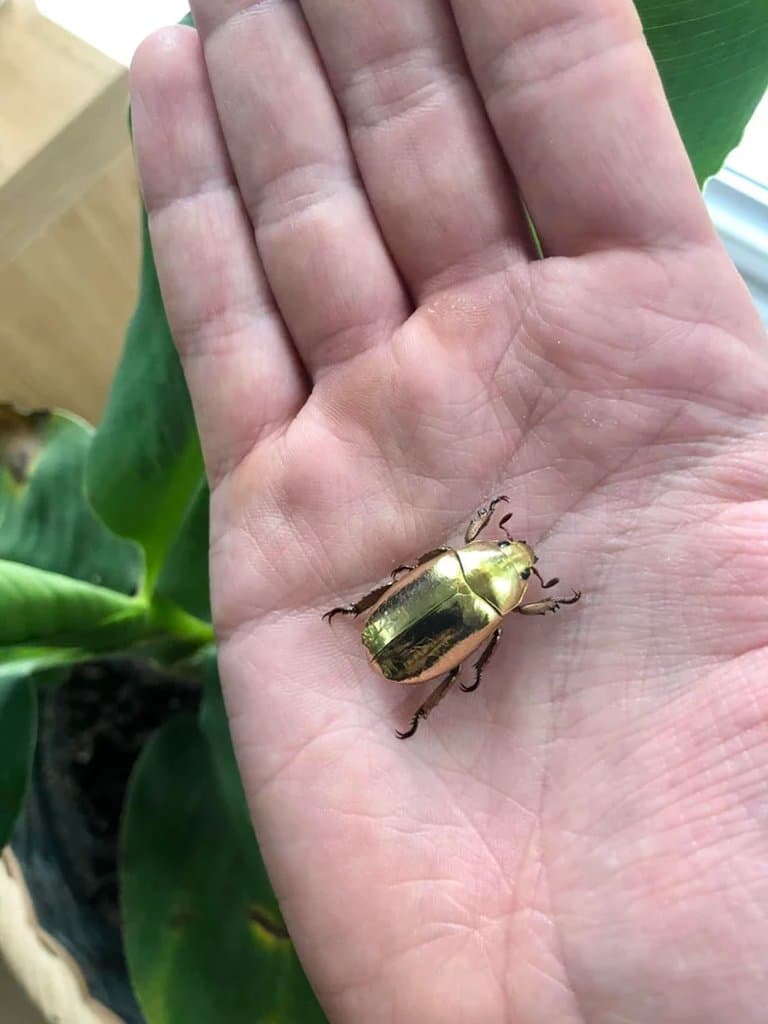 4. Nobody is quite sure, why

Presumably, these beetles aren’t trying to look this good just so collectors can come and sell their desiccated corpses on eBay. There must be a reason that this effect has been so successful in keeping the genus alive.

One suggestion would be that the reflection mimics the way drops of water condense from the humid Costa Rican air onto the rainforest leaves.

Another is that the light reflected by the different layers in the elytra of these beetles makes them look a different colour to different animals, possibly appealing to other scarabs and obscuring their outline from predators.

It could also have something to do with thermoregulation. There have been some loose comparisons to the chameleon, whose colour changing has been attributed to a response to temperature changes.

This doesn’t seem to be any more than a vague association so far, and would need to be studied further.

This is a question that actually has an answer, albeit a complicated one. The very clever people who study light and reflections and other intricate physical properties of materials discovered that the jewel scarabs have a layered elytrum (wing case).

As in all insects, this is made up of a cellulose-like structure called chitin, but unlike other insects, this structure is layered into a complex cuticle, with each layer reflecting different kinds of light.

These layers act to not only break up wavelengths like a prism, but then to recombine them and reflect them with what’s called “constructive interference”, which amplifies their brightness as the light is reflected away from the beetle.

The circular polarisation of this light is a lot harder to describe, but is attributed to a “Bouligand-type helicoidal morphology within the beetle’s exocuticle”.

This essentially means there’s a helix formed by the layers in shell that polarise the reflection. 2

6. Brightness as a communication

Brightness isn’t always what it seems. As mentioned, high reflectiveness can be very camouflaging in forest environments, as the reflection will resemble whatever it’s surrounded by.

But there’s more to this reflection than meets the human eye. While many animals such as bats, birds, and mantids can see linearly polarised light, very few can pick up on circular polarised light. At least, as far as we know.

However, recent studies have shown that jewel scarabs not only reflect this light, but can see it, too. This suggests the bizarre property might be a way of sending out a signal that highs in plain sight.

A reflection that’s vivid to its desired mates and cryptic to any predator that might be lurking. A sort of encrypted signal from one beetle to another. 3

Many species of jewel scarab are polymorphic. This is the occurrence of two or more clearly different morphs.

Similar to how a jaguars skin colouring can be a light or dark morph, jewel scarab beetles are the same, with different morphs such as metallic gold and silver!

The majority of the species are often a bright green color. 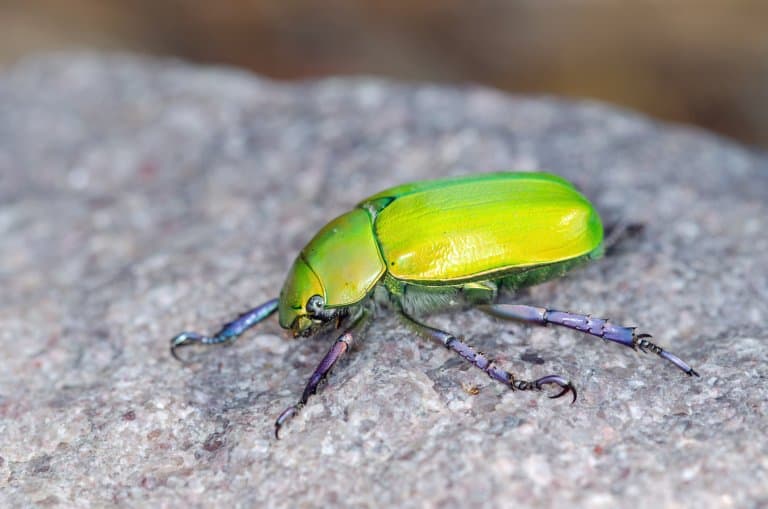 Regardless of how or why, their beauty has not gone unrecognised, and these beetles are very popular among collectors. They’re commonly sold for upwards of $400 for well-preserved specimens, which may put them at risk.

So far, they appear to be unlisted on the IUCN, giving no indication of how well they’re doing, but we do know that human behaviour is compounding the risk in other ways.

These beetles, like many others, are mostly nocturnal and attracted to light. Human-caused forest fragmentation is occurring in many of the natural habitats of the jewel scarab, setting up frequent outposts of human activity and all the artificial light that comes with it.

So, even in areas where their special habitat remains relatively uninterrupted, there is a dimension of fragmentation that comes from introducing lights to the forest, affecting dispersal habits of insects and threatening population success.

This is a shame, because even as recently as 2022, new species are still being found. 4