The Japanese macaque is a species of Old World monkey native to Japan and are sometimes referred to as ‘Snow Monkeys’.

This is because some of this species live in the north of Japan, where the climate can be extremely cold – and snow covers the ground for many months of the year.

They can be found in a range of forested habitats, from lush evergreen forests in the South, to the freezing subalpine forests in the North of Japan. 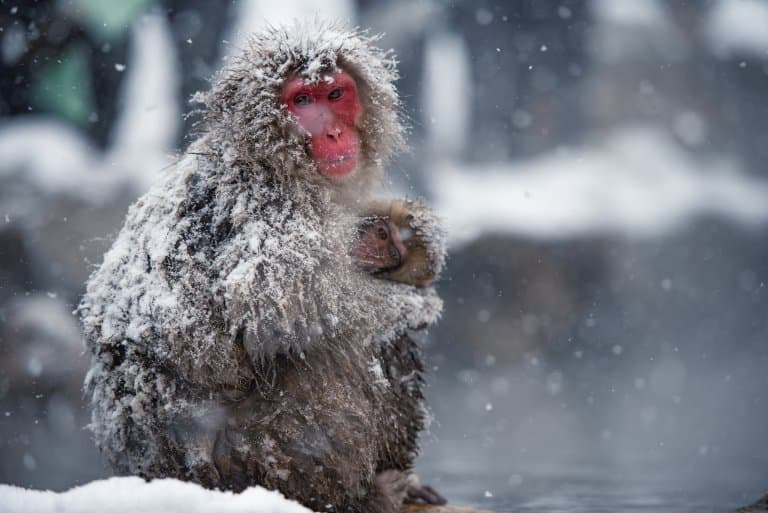 These primates are stocky in appearance, with a thick greyish coat, short tails and a human-like face, that’s bright red with expressive eyes.

Like most primates, the Japanese macaque is a very social species, living in groups called ‘troops‘ of around 30 individuals. These groups are extremely adaptable and this is why they are able to tolerate particularly harsh environments.

Individuals are part of a complex hierarchy that’s important to the wellbeing of the whole group. These troops are typically led by a dominant male and dominant female. The number of females far outweigh the number of males, as males leave the group once they reach sexual maturity. The dominant, or alpha male, leads the group.

Though Japanese macaque groups are part of a strict hierarchy, these monkeys are known to be gentle creatures and show compassion to other individuals in the group. All members of the troop not only help groom one another, keeping the group parasite-free, but will also share food and help with parental duties.

Japanese macaques are most famous for their habit of bathing in hot springs. The group will travel to these hot springs and huddle in the warm baths to escape the freezing temperatures. This behaviour, and several others displayed by these monkeys, have helped change perceptions of intelligence in non-human primates.

They are highly intelligent animals and have been observed washing dirt off food in rivers and even playing with snowballs and rocks. They are also hugely communicative, making a range of facial and visual cues to express emotion.

Japanese macaques play an important role in the ecosystem, especially as seed dispersers. Their diet comprises a large amount of plant material and through their droppings, they ensure that the seeds of many different species of plant are able to germinate and ensure that specific habitat’s survival.

The Japanese macaque has long been a revered animal in Japanese society and has thus been able to live in relative peace across its range. As with most primates however, habitat destruction and human encroachment are serious challenges facing Japanese macaques. It is therefore remarkable how these monkeys have been able to survive and flourish in some of the environments in which they are found. 1

1. No other monkey is found as far North as the Japanese macaque

Not only are they the only native monkey species found in Japan, they are also the only monkey species in the world found this far north, often living in freezing temperatures. 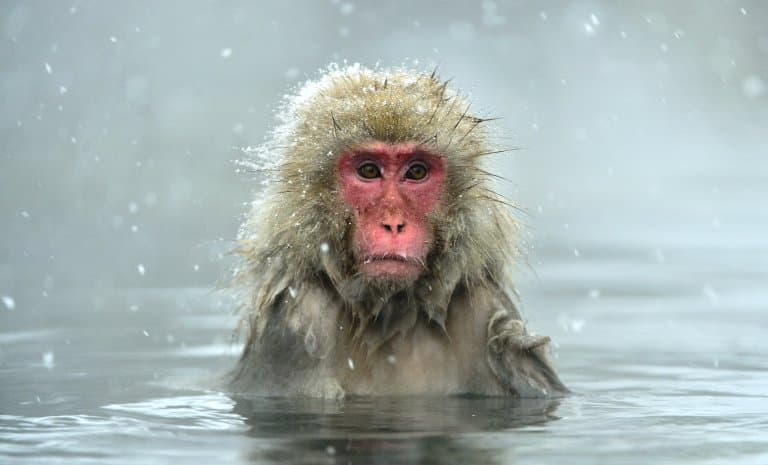 2. They can survive temperatures as low as -20 degrees C

Their thick, dense coats and ability to huddle together and find warm spots allows the Japanese to survive in temperatures few other mammals can tolerate.

Young snow monkeys have been observed rolling up snowballs, then pushing them down hills just for the heck of it.

Others gather lumps of snow in a ball and carry them around, proudly sometimes to the envy of other monkeys who try to steal it.

Adults occasionally play too, seemingly enjoying this activity for fun.

In areas where snowfall is heavy, Japanese macaques will spend as much time foraging for food as possible. However, in order to stay warm, they will find sunny areas or hot springs to warm themselves up in for hours.

Only high ranking males and females are allowed to bathe, though!

This somewhat protects them from rain and snow and the most dominant individuals will take the most protected positions in the trees.

6. Their pinkish red faces are not just for show

The bare, bright coloured face of a Japanese macaque exaggerates their facial expressions and allows them to communicate more effectively with one another. 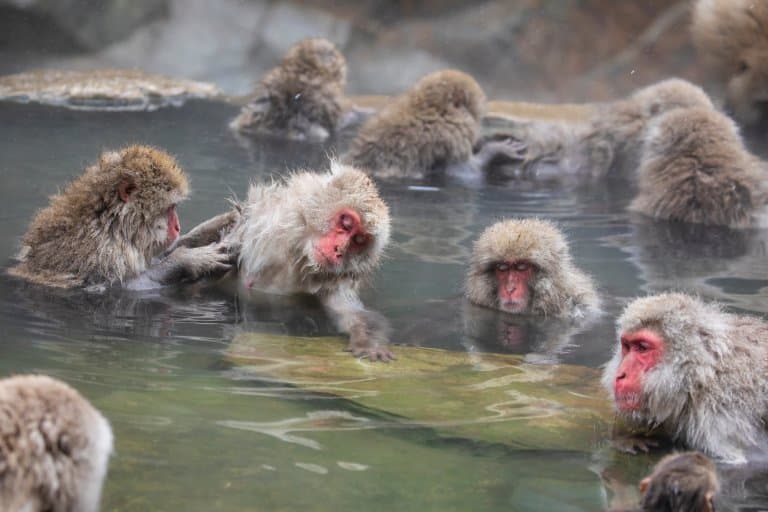 7. They team up with Sika deer

Where they are found in the same habitat, Japanese macaques and sika deer seem to congregate together. The sika deer follow the monkeys as they forage in the trees.

The sika pick up any leaves/fruit that are dropped by the monkeys and provide and extra set off eyes looking out for predators. They have also been seen riding on the backs of the Sika deer!

8. They teach each other skills

A Japanese macaque named ‘Imo’ was observed washing dirt from potatoes in rivers.

Soon other members of the group followed and they also washed food in the sea, possibly adding salt to their diet.

As a result of their obvious intelligence, the Japanese macaque has been involved in many studies from researchers concerning neuroscience.

Female Japanese macaques will rarely leave the group into which they are born. They therefore spend their entire lives together and create very strong bonds.

10. They are very wary of mountain hawk-eagles

One of the main natural predators to Japanese macaques, especially to the young, are large raptors.

The macaques will shrilly call whenever a large shadow flies over them to help warn each other of a possible predator attack.

During cold weather, Japanese macaques will huddle together to keep warm. When temperatures grow even colder, the huddle size increases so more body warmth spreads across the group. 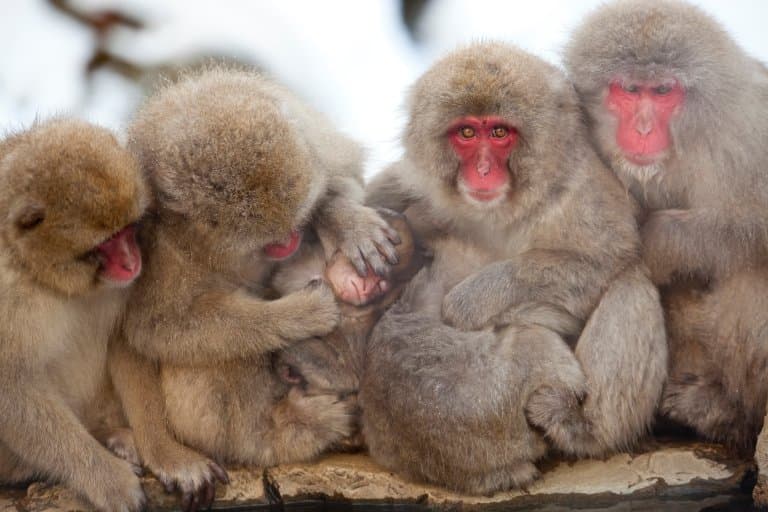 12. Japanese macaques can mate on both the ground and up in trees

Japanese macaques are agile climbers, but spend much of their time on the ground.

They will however sleep, and mate in trees – especially if a lower ranking male is trying to hide what he is doing from the dominant male!

Recent studies suggest they develop different ‘accents’ based upon their regional groups, similar to human culture.

Macaques troops that were separated by hundreds of miles, were found to have different pitches to their calls and range of vocalizations. 2

14. Their have been records of female troop leadership

While typically an alpha male will lead the group, there a famle named ‘Yakei’ was documented by researchers taking leadership of her troop at Takasakiyama Natural Zoological Garden in 2021.

She overthrew the dominant males of the time, and displaced her own mother. Her troop was large, consisting of 677 macaques!

15. Their conservation recovery has triggered conflict

Macaques were a vulnerable species until the early 20th century, and their populations have now recovered and are classified as of ‘least concern’ by the ICUN.

However, it has rarely been hailed as a conservation success in Japan, as the growth in population size has triggered conflicts between macaque monkeys and humans.

Their recovery has “triggered serious conflicts between people and the macaques”, according to research from Yamagata University. 3 This research summarises the main causes of conflict:

The key exacerbating causes of the conflicts have been the drastic changes in the interrelations between the people, forests, and macaques, as well as the unprecedented social changes in modern Japan (i.e., nationwide depopulation).

While uncommon, there have also been incidents of ‘rampaging’ monkeys, such as in 2022, where 42 people were reported as injured in Yamaguchi city (including children and the elderly). 4