Stalking through tropical marshes on the lookout for prey, the jabiru is a truly striking figure; its long, bald neck and scaly legs giving it a distinctly dinosaurian appearance.

From the perspective of the small creatures it hunts, it is certainly comparable to the monstrous predators of the Cretaceous Period and doubtless just as terrifying. 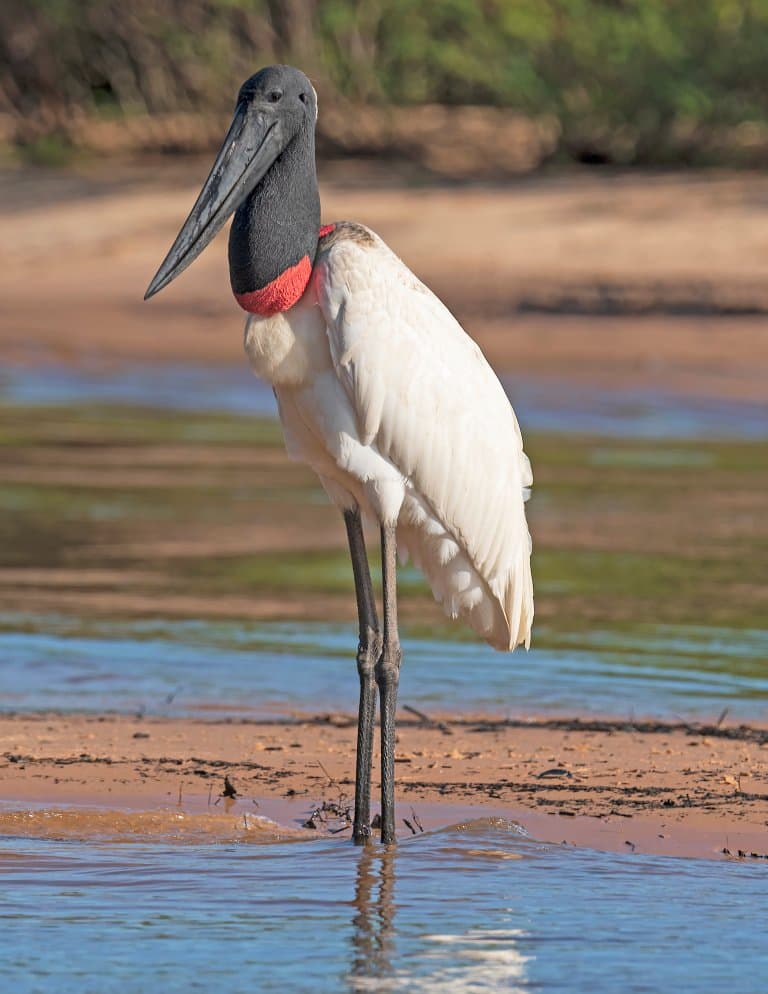 Jabirus are large storks, and the tallest flying birds in South and Central America, looming over every other avian species in their range apart from the flightless rhea.

They sometimes wander into the USA and are most common in the Pantanal region of Brazil.

They are indiscriminate predators, and spend their time stalking through shallow pools and wetlands on the lookout for pretty much any small animal that will fit in their beak.

Although they share the family Ciconiidae with twenty other stork species, they are uniquely alone in their genus; all the other genera within the family contain at least two species.

They live in large groups near rivers and ponds and diet on fish, insects, small mammals, amphibians and even reptiles.

Jabiru are widespread and are considered a species of least concern by the IUCN currently.

It comes from the South American Tupi–Guaraní language and refers to their distinctive bulging neck. 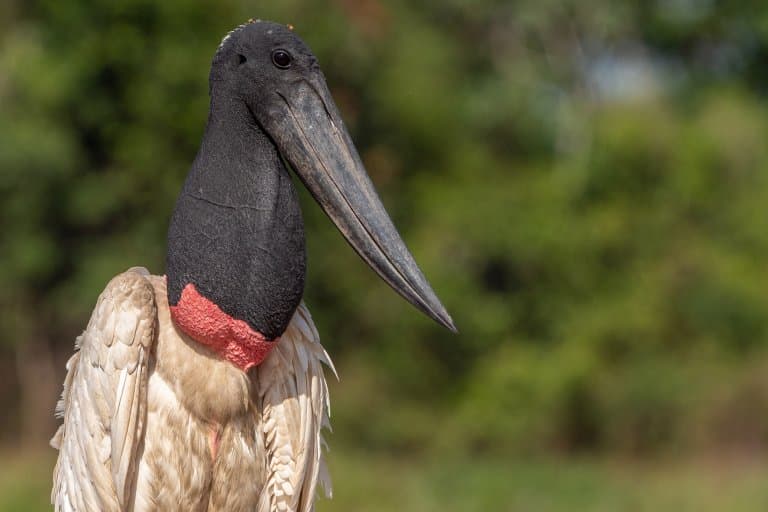 Jabirus will happily scavenge when they can, a behaviour which benefits whole communities of animals. In the dry season they help to maintain the quality of ever-shrinking water bodies by removing dead fish and other carrion from them.

3. They have the second largest wingspan on the continent

Their wingspan can be over 9 feet (2.8m), which is second only to the Andean Condor in South America. This bird can have a wingspan of over 10 feet (3.3m). 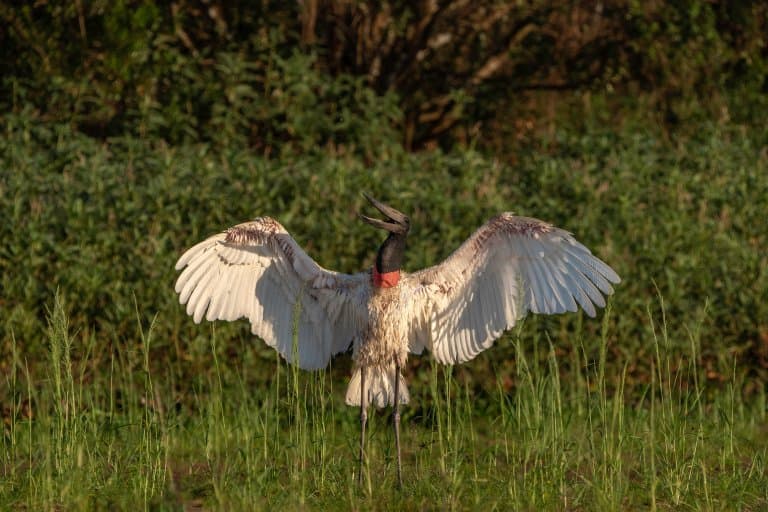 4. They can locate their prey by touch

While they have keen eyesight, jabirus have an extra adaptation for finding small animals that they can’t see. Their beaks are highly sensitive to touch and are used to probe for prey in muddy water or beneath floating plants. 1

5. They are versatile predators

They are well adapted for feeding in water, but jabirus don’t turn their beaks up at a novel feeding opportunity. They are attracted to fires, catching small animals as they try to escape the flames, and have also been recorded gathering in their hundreds to catch mice in farmers’ fields. 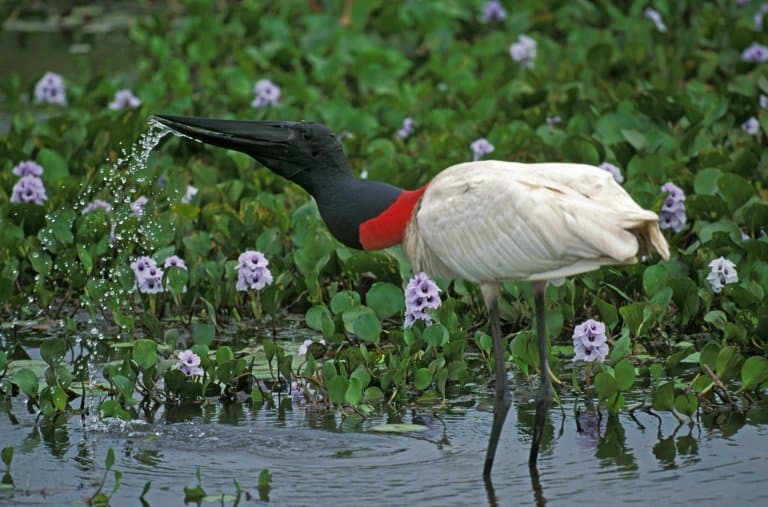 6. Their throat pouch is a social signal

The throat pouch of the jabiru is loose and light pink when the bird is relaxed. However, when communicating anger, aggression or exertion, the throat pouch is inflated and turns a bright scarlet.

Jabirus are the only members of the family Ciconiidae that exhibit significant size differences between sexes. Males have longer, straighter beaks than females, and can be up to 25% larger overall. 2

8. They occasionally turn to theft

When food is scarce, jabirus have been observed stealing prey from other birds, including other jabirus.

This behaviour is called kleptoparasitism and is known to occur amongst many stork species, especially when large gatherings of birds form.

9. They invest heavily in their young

Jabirus produce clutches of two to five eggs at a time, and spend the following six months incubating and caring for their chicks.

The amount of energy they spend rearing their young usually causes them to skip a year between clutches- only 25% of jabiru pairs successfully breed in successive years. 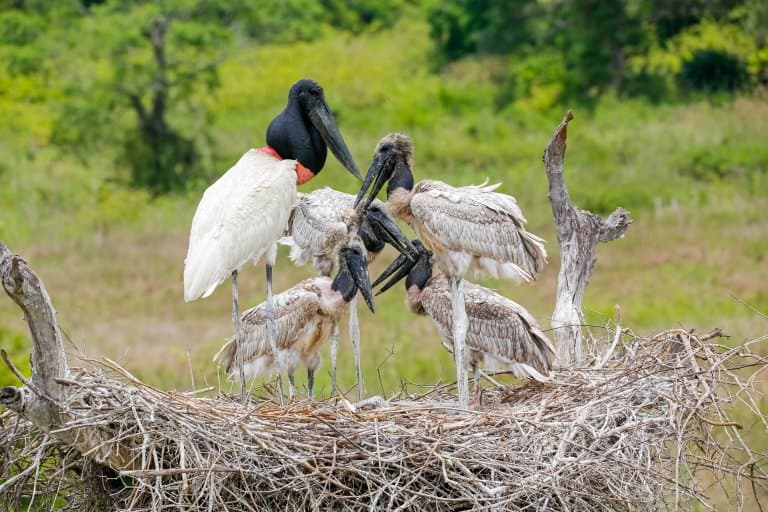 10. Cannibalism amongst jabirus is not unknown

During the breeding season, jabirus have been observed stealing and eating the eggs of other jabirus.

Perhaps in response to this threat, they are known to be fiercely territorial around their nests while incubating their eggs.

11. They share their common name with two other storks

The Asian black-necked stork and the African saddle-billed stork are both known in their local ranges as jabirus.

They belong to the genus Ephippiorhynchus, and are considered to be the closest living relatives of the ‘true’ New World jabiru.

Jabirus remain with the same partner for multiple seasons, and return to the same nest every time they breed. They add more material to their nest each time, and over the years these can grow to over a metre wide and almost two metres deep. 3 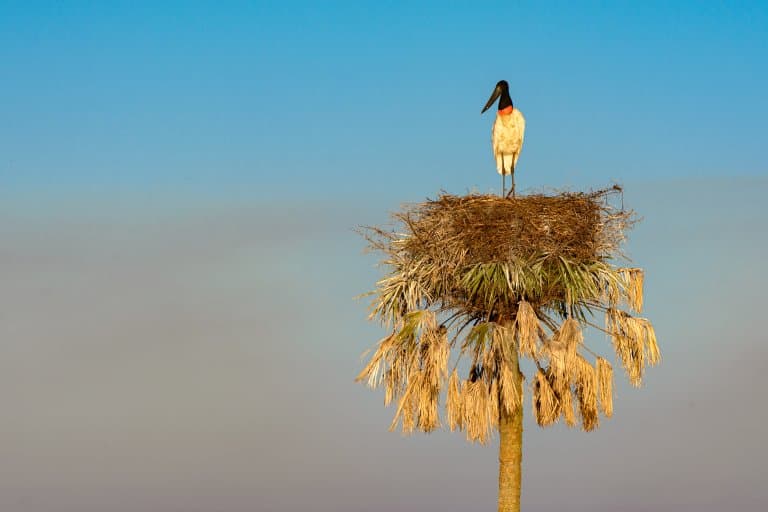 13. They are monogamous, but not always faithful

Evidence has been found of extra-pair paternity in jabirus, where not all of the young in a single brood share the same biological father.

It is rare, occurring in less than 10% of jabiru nests, but it has been recorded occurring more commonly in other Ciconiidae species including the wood stork (Mycteria americana) and the white stork (Ciconia ciconia). 4

14. Their numbers are recovering as a result of protection

Jabirus were once hunted by humans for their feathers, and experienced a severe decline that led to them being listed as Near Threatened by the IUCN in 1988.

Since then they have acquired official protected status in Belize, where their numbers are steadily growing, and also in the USA where jabirus are rare visitors. 5 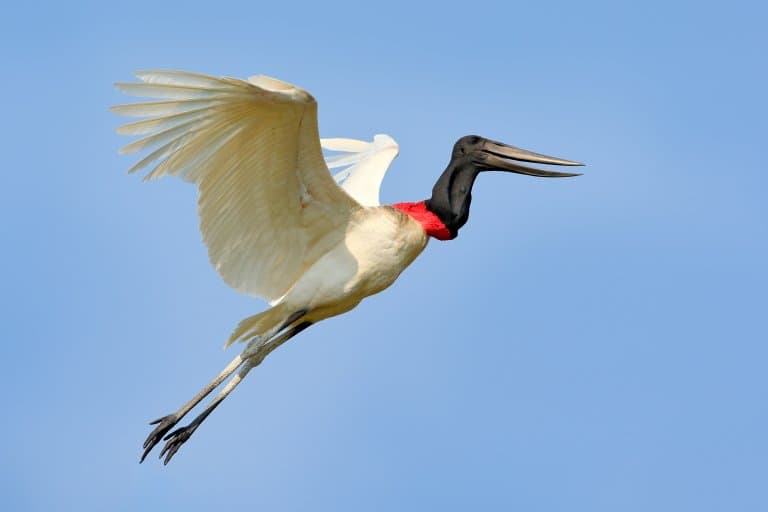