Irrawaddy dolphins (Orcaella brevirostris) are a species of oceanic dolphins. These aquatic mammals live in small populations throughout parts of southeast Asia where salt water and freshwater mix.

Irrawaddy dolphins have rounded heads with short snub noses, unlike many other dolphins.

While Irrawaddy dolphins look a little like a baby beluga whale, they are not closely related.

Their unique habitat needs limit where they can survive, and these small populations frequently come into contact with humans. They have a great cultural significance to communities in southeast Asia as a result.

Irrawaddy dolphins live in coastal areas in South and Southeast Asia, and in a small number of isolated freshwater bodies, including three main rivers: the Mekong (Cambodia, Laos), the Ayeyarwady (Myanmar), and the Mahakam (Borneo) river. They also live in two lakes: Chilka Lake in India, and Songkhla Lake in Thailand.

They inhabit a 118-mile stretch of the Mekong river between Cambodia and Laos and are extremely rare, with an estimated 85 dolphins on the verge of extinction.

Irrawaddy dolphins are endangered due to pollutants in the water, urbanisation close to their coastal homes, fishing reducing their food source and entanglement in nets and climate change.

1. They are mammals and breathe air 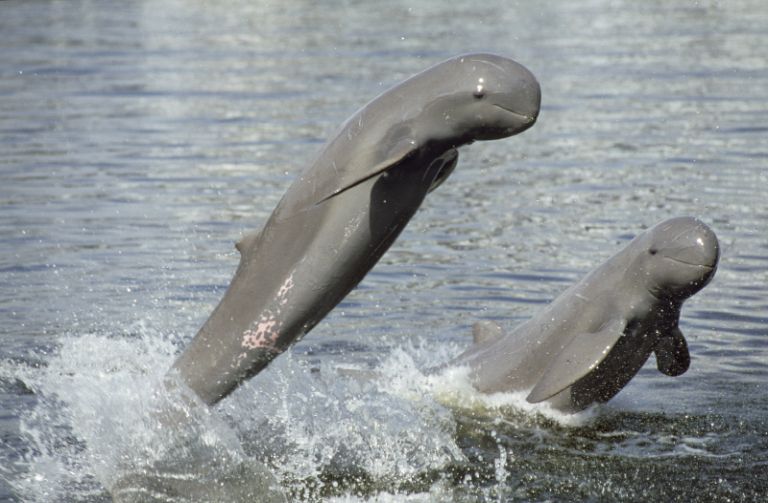 2. They have unusual habitats

Bodies of water have different salinities, or concentrations of salt. Irrawaddy dolphins are euryhaline, which means that they can survive in a wide range of salinities. They live in areas where low-saline freshwater meets high-saline ocean water. As ocean tides, currents, and other forces mix the waters together, the Irrawaddy dolphin’s body adjusts to the changing salinities.

3. Irrawaddy dolphins are known for their short noses 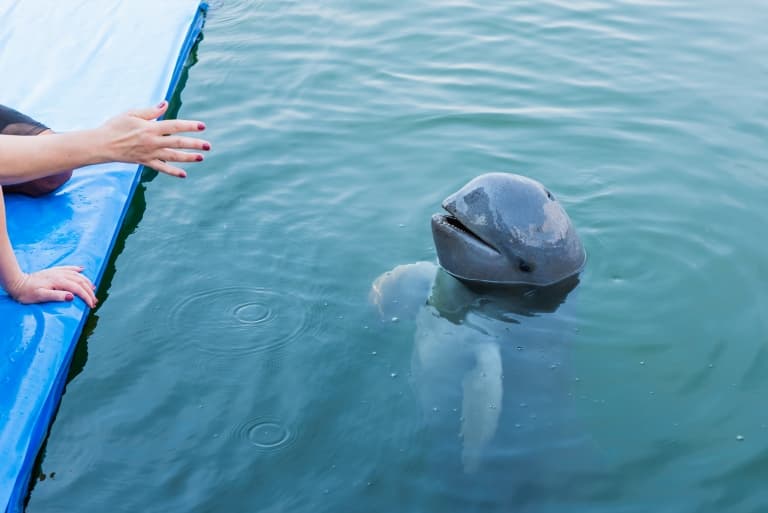 The Australian snubfin dolphin (Orcaella heinsohni) is the other.1 They were recognized as separate species in 2005. 2

5. Their rounded heads have earned them a special name

Irrawaddy dolphins are known as โลมาหัวบาตร (loma hua bat, or “alms-bowl dolphin”) in Thai. The name refers to their head shape, which resembles a bowl used in religious ceremonies. 3

Next to the Australian snubfin dolphin, the Irrawaddy dolphin’s closest relatives are orcas, which are sometimes known as “killer whales.” Both are oceanic dolphins and members of the Delphinidae family.

Irrawaddy dolphins can squirt water from their mouths over a distance of 1.5 meters (about 5 feet). They use this ability to force fish into smaller areas, where they are easier to catch. 4

Some whales and dolphins, including the Irrawaddy dolphin, engage in a behaviour called spyhopping. This is when the animal pokes their head vertically out of the water to survey their surroundings for predators and prey. 5

Irrawaddy dolphins are usually seen in groups of 2 to 5 individuals, although they are sometimes spotted in groups as large as 15. 6 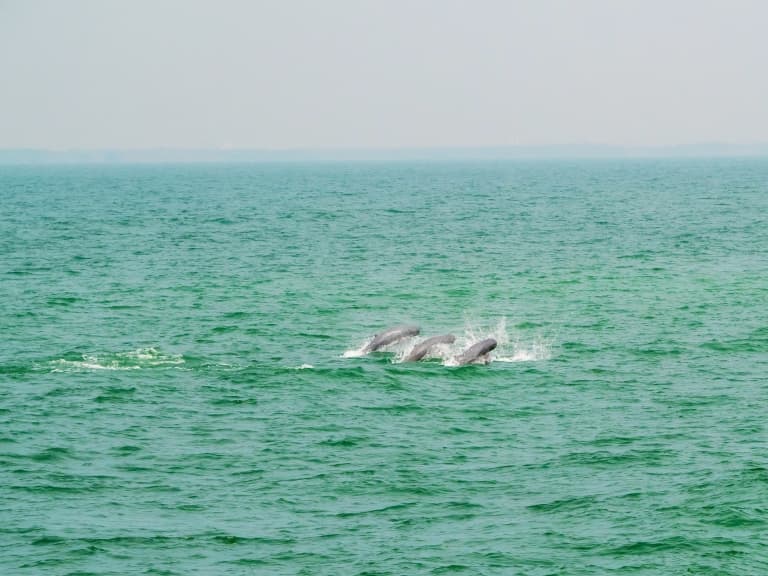 10. Staying in groups keep them safe

Irrawaddy dolphins are vulnerable to threats from sharks. By staying in groups, they become more difficult to hunt and have better chances of survival.

The dolphins can form a circle around prey such as squid and crabs, preventing them from getting away.

They can stay submerged for up to 12 minutes without needing to return to the surface to breathe.

Irrawaddy dolphins have developed mutualistic relationships with humans in which both the dolphins and the people benefit. The dolphins are known to chase fish into nets for humans. In return, the dolphins are rewarded with a portion of the catch.

14. Irrawaddy dolphins are bothered by noise

These sensitive dolphins are disturbed by noise pollution from boats and other sources. The noise causes them to dive deeper and stay further from populated areas.

15. They are important in Cambodia and Laotian culture

Irrawaddy dolphins are sometimes believed by Cambodia and Laotian people to be the reincarnations of ancestors. Some people even claim that dolphins have saved drowning villagers and protected people from attacks by crocodiles.

16. They are considered sacred

Khmer and Vietnamese fishers have regarded Irrawaddy dolphins and Australian snubfin dolphins as sacred. If the dolphins are caught in fishing nets, the fishers will release the dolphin from the rest of the catch.

18. Special zones have been created to protect them

Local governments have established areas to protect Irrawaddy dolphin populations. In these areas, human activity is limited, and the dolphins are kept safe from harm. These efforts are helping to increase the populations of this threatened species. 8