The hummingbird hawk-moth is a species of hawk moth, which is named due to its striking similarity to hummingbirds. Hawk moths are numerous species in a family of moths, all distinguished by their agile and sustained flying ability.

They are most common across Europe and Asia, with some populations appearing in the northern countries of Africa. Like many other types of hawk moths, the hummingbird hawk moth relies on flowers as their main food source. 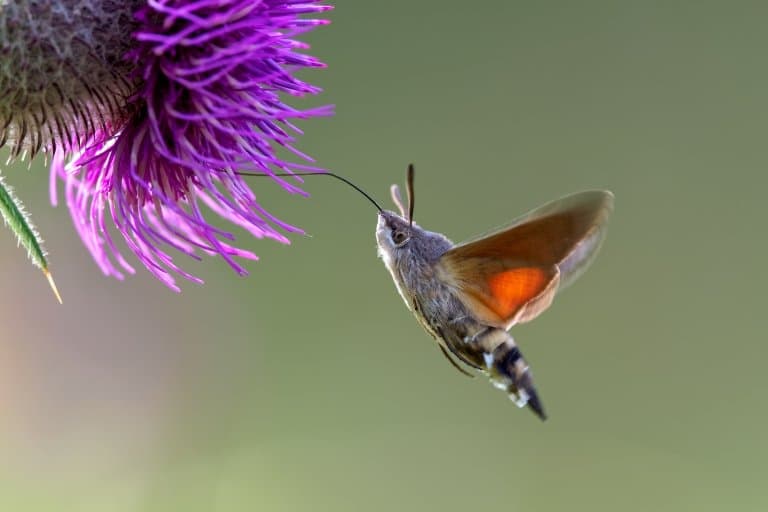 Hummingbird hawk-moths can be found in gardens, meadows, parks and woodlands where there are nectar-rich flowers that it diets upon. Their favourite plants are is Galium (bedstraw) and Rubia (wild madder), as well as red valerian, honeysuckle, jasmine, Buddleia, lilac, Escallonia, petunia and phlox.

Caterpillars can generally be found between June to October, and they overwinter as adults in crevices in walls, trees or outbuildings before cocooning among plant debris or leaf litter.

As adults, they grow up to around 2 inches in length and have brown-orange hindwings. It has forewings that are brown-grey and a black and white chequered body.

Hummingbird hawk-moths are an important type of pollinator. However, they’re often not seen as important pollinators since they don’t pollinate crops like bees do. While they may not help in the agricultural industry, though, like all types of hawk moths, they’re essential to the life of many native plants. Without them, many animals would fail to thrive in the wilderness.

As far as reproduction goes, hummingbird hawk-moths produce groups of eggs known as broods. A single female can lay hundreds of eggs, which hatch in around a week. However, she doesn’t lay each egg together. Instead, she flies around, laying each egg on its own individual plant.

The hummingbird hawk-moth convervsation status is unlisted, but are not under any threat, with large populations and widely distributed.

It’s easy to mistake these incredible animals as birds, but as their name (half) suggests, they are moths. But not like you usual moth that comes out at night.

They are a day-flying moth, with an appearance of tail feathers, and the ability to fly and feed like a hummingbird! They are pretty to look at, which can be unlike other moths!

They are also far more robust than your usual moth or butterfly, capable of feeding from flowers even in the rain. 1 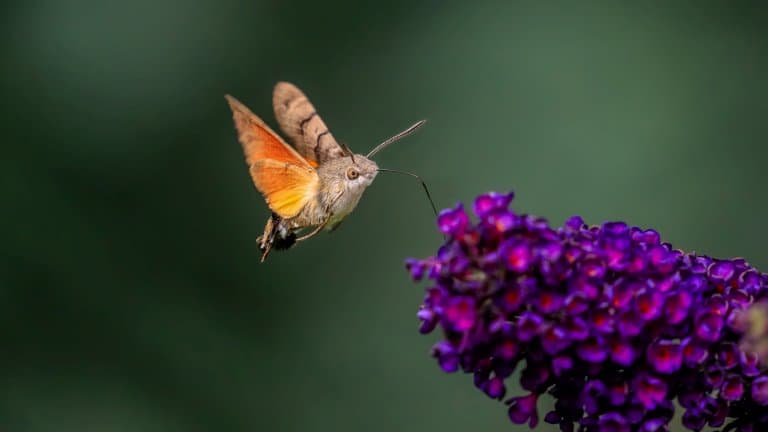 2. They’re not the same as hummingbird moths

When it comes to common names, things can get tricky. However, it’s important to know that hummingbird moths and hummingbird hawk-moths aren’t the same thing!

The hummingbird hawk-moth is known by the scientific name Macroglossum stellatarum. As a result, it is in the genus Macroglossum. This species in particular finds its home in the region known as the Old World, which is made up of Europe, Asia, and Africa.

The hummingbird moth, however, is in a completely different genus, Hemaris. They are still a member of the Sphingidae family, though, making them distantly related to hummingbird hawk moths. This species is more common in the New World, which includes North and South America.

If you watch a hummingbird hawk-moth eat, you may notice that they’re extremely similar to a hummingbird. They use their long straw-like mouthpiece, known as a proboscis, to suck the nectar out of flowers.

This is the ability to move rapidly from side-to-side while hovering.

It’s thought this ability evolved to help evade ambush predators that lay awaiting them in flowers. They can in an instant side-step any danger!

They even emit an audible humming noise as they hover over plants. 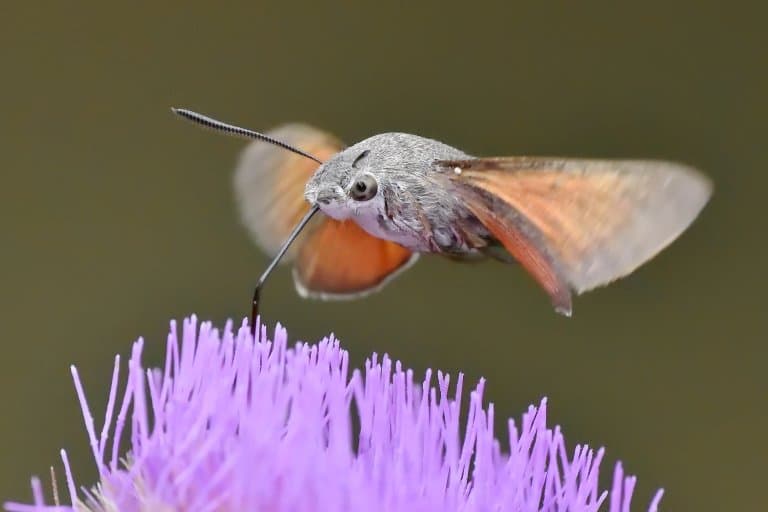 6. They have a routine

Most of the time, when you see insects like moths, butterflies, and bees flying around, it doesn’t seem like they have a plan. When they land, it seems random, and they don’t appear to have a preference for certain flowers. However, that’s not always true.

Hummingbird hawk-moths do what is known as trap-lining. This means that they are thought to return to the same flower beds around the same time each and every day.

They have also demonstrated a preference for certain types of flowers.

7. Their favorite flowers are those with longer, tube-like shapes

Everything is nature faces competition. This is because there are simply not enough resources to support everything. Trees have to compete for sunlight, animals for space and food – this is the circle of life in the wilderness. 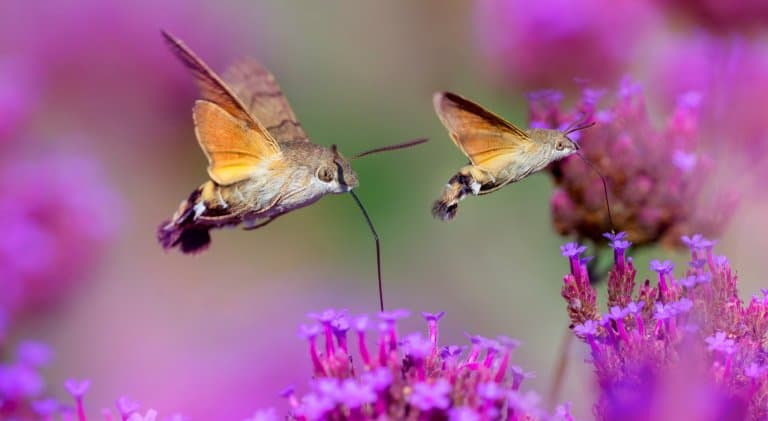 Like many other types of insects, the hummingbird hawk-moth has several eyes, more than the two we are used to seeing on animals.

However, as far as multi-eye insects come, the hummingbird hawk-moth is actually on the end of the spectrum with fewer eyes. Their eyes are more complex, though, allowing them to see more. 3

9. They’re named for the appearance of their larvae

The hummingbird hawk-moth is a part of the family Sphingidae, which is made up of all types of hawk moths, also known as Sphinx moths.

This is because of the fact that young hawk-moths, before they become moths at all, look like the ancient Egyptian cat.

10. We know their entire genome

Since they were discovered, genetics has also been a topic of intrigue in the science community.

The hummingbird hawk-moth was first described in the 1700s, when nomenclature, or scientific names, emerged. As of 2018, we’ve been able to completely understand their genome. This means that we know all of their genes! 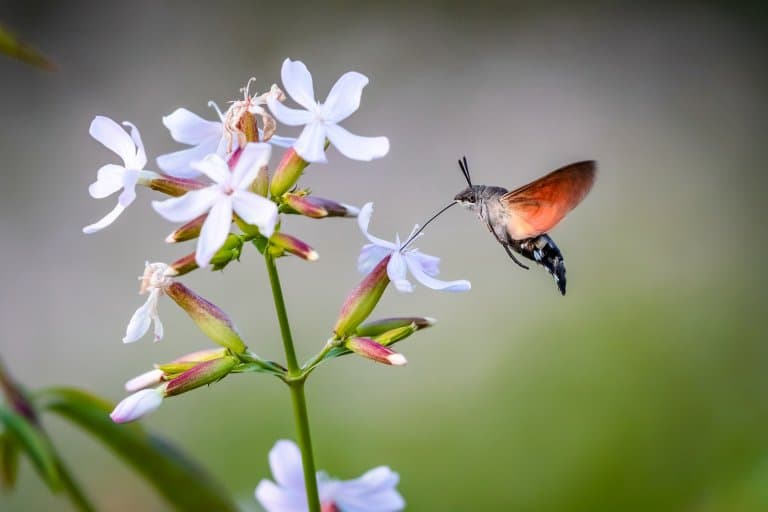 11. Hummingbird hawk moths are considered a sign of good luck

These tiny insects have a big message packed in their little body. Around the world, many cultures consider the hummingbird hawk-moth as a symbol of good luck.

This goes along with the usual meaning for moths overall, which can be linked to transformation and change.