The helmeted hornbill is a large bird and one of the most endangered of all the hornbill species.

They are only found in dense, tropical forests in a handful of countries across South East Asia and are notoriously shy birds. Helmeted hornbills tend to avoid forest edges and any areas disturbed by humans and this makes them tremendously difficult to observe in the wild.

These magnificent hornbills are so called for their large casque or ‘helmet’ which sits high on top of their beak. This casque differs from those found in other hornbill species in that it is almost entirely solid and can account for over 10% of the birds’ weight. They have very long tails and some of the largest individuals have measured over 1.5m in length. 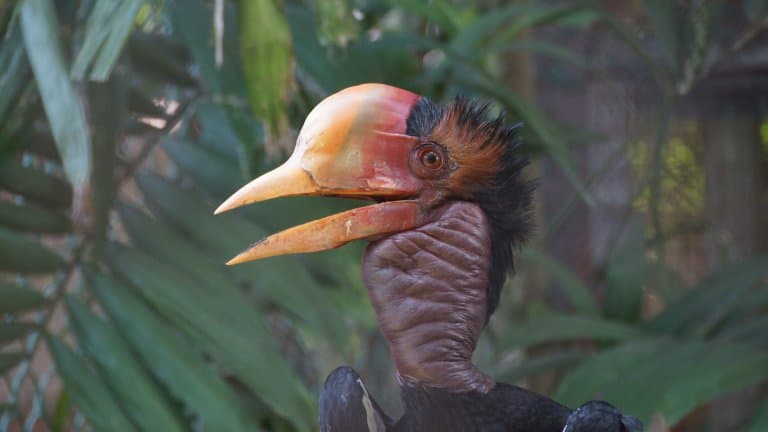 Feeding mostly on large fruit, especially figs, the helmeted hornbill is entirely dependent on prime, undisturbed rainforest. Despite their preference for fruit, they are omnivorous birds, hunting for lizards, squirrels, nesting birds and even snakes when the opportunity arises.

Male helmeted hornbills are extremely eye-catching due to their large size, tails which appear too long for their bodies and a bright red, bare patch of skin on their throats. This throat pouch also allows the hornbill to carry several items of food back to the nest in a single flight, therefore making them very efficient foragers and hunters. Females also have bare throat pouches but these are of a light, turquoise colour.

One of the most interesting habits exhibited by helmeted hornbills occurs during the breeding season. Although they are generally quite unsociable animals, when it comes to breeding they are monogamous and mate for life. The female lays her eggs in a hollow, high up in a tree and the male surprisingly seals his mate in the nest. He mixes clay and droppings together to form a type of building plaster, leaving only a tiny gap, just big enough for the female’s beak to poke out. The female remains in the nest for up to 5 months, relying entirely on her mate to bring her and her chick food.

Helmeted hornbills almost always only rear a single chick during the breeding season and due to the extremely distinctive chick rearing method, they do not breed very often. This and the fact that these hornbills require specific, large trees to nest in, need pristine rainforest to survive and are ruthlessly hunted for their casques, have made the helmeted hornbill one of the rarest hornbills in the world.

1. Their casque is made of keratin, much like our fingernails

It is sometimes referred to as ‘red hornbill ivory’ and is one of the main reasons that these birds are so endangered, being hunted and killed for their casque.

The casque is said to be easier to carve and smuggle than elephant ivory and therefore is highly sought after by poachers. 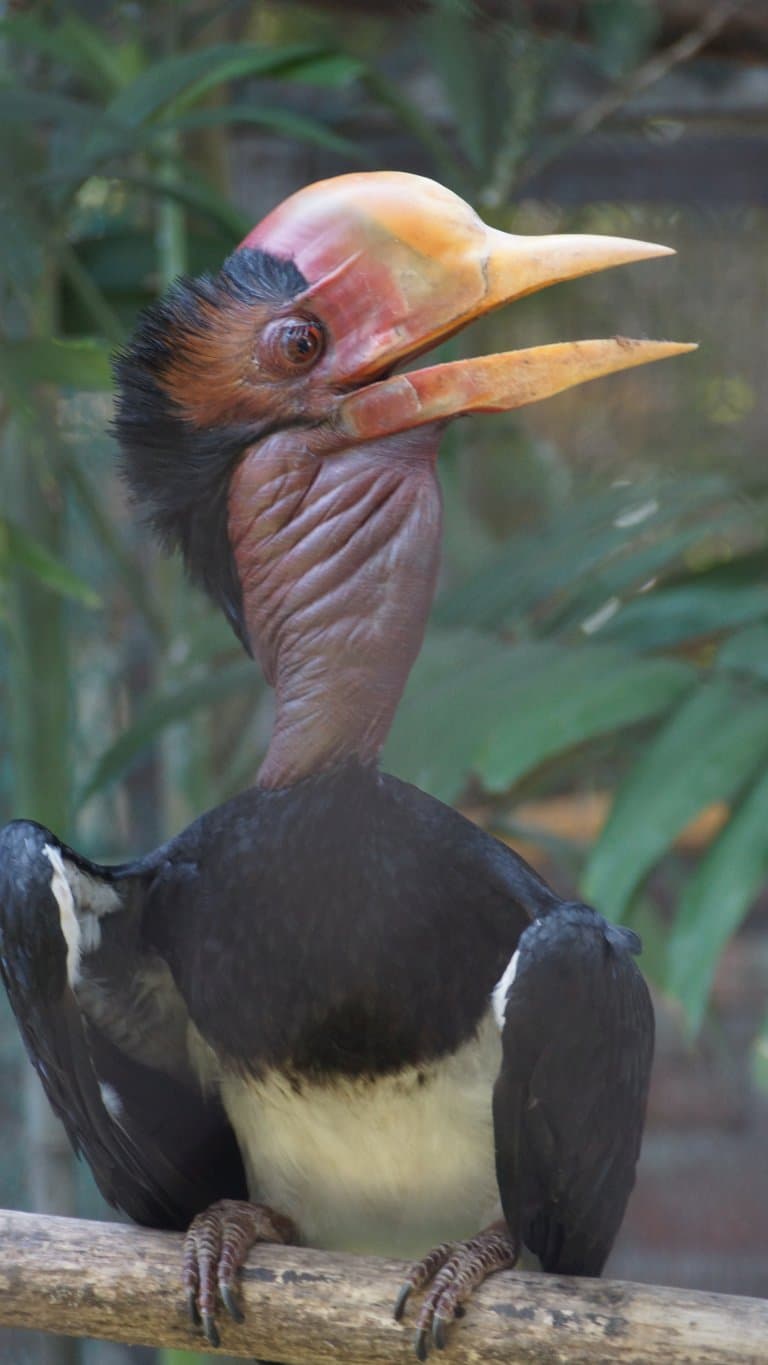 2. They use their casque to fight

The purpose of the casque on helmeted hornbill also differs from many other hornbill species. It is almost completely solid and thus does not play a role in amplifying their calls. However a casque is an important feature when it comes to testing dominance.

Males who are protecting their territory will fly at intruding hornbills, crashing their casques into one another, much like how goats use their horns for jousting.

Flying at one another and crashing into each other’s casques, the winner is determined by whoever bounced backwards in mid-air. 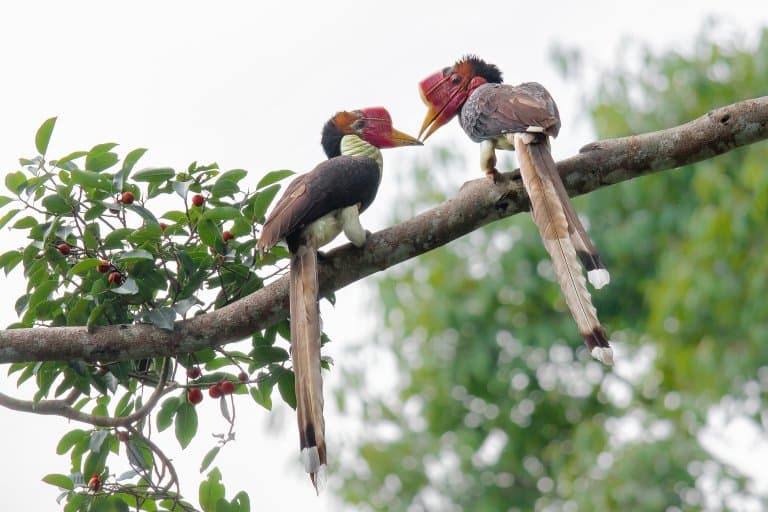 5. The red colour of their beaks is due to an oily secretion used for preening

Helmeted hornbills have glands which release a substance that they use to keep their feathers clean and in good condition. This oily secretion actually stains half their beak red, leaving the tip yellow.

6. They have incredibly long tails 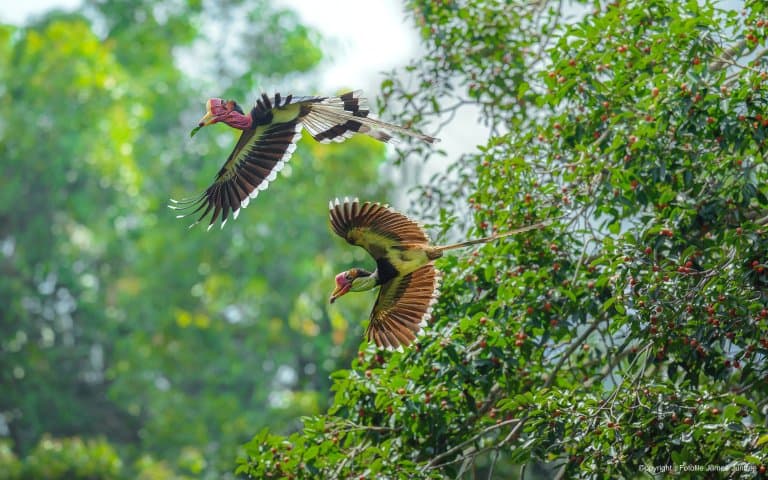 Hatching inside the hollow of a tree, the chick is entirely dependent on its parents for over 5 months. Chicks have no feathers at first and rely on warm air under their skin to stay warm.

8. Females are completely dependent on the male when nesting

When they are ready to incubate their eggs, females lose all their flight feathers and will not be able to fly for several more months, usually when the chick is ready to fledge. 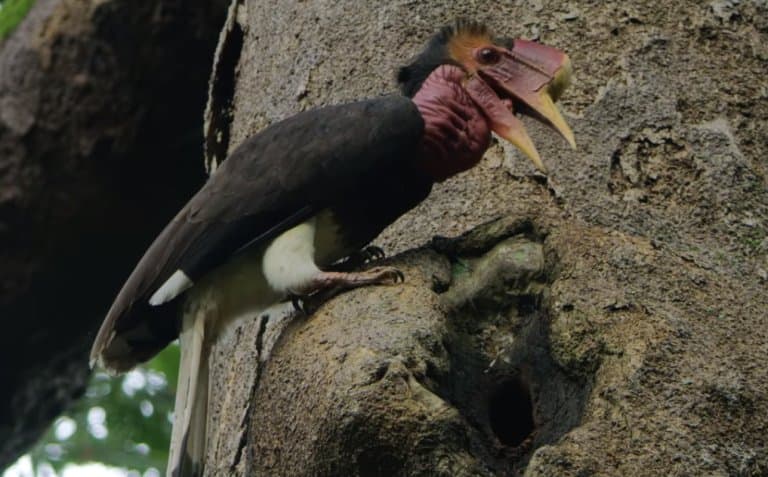 9. Sometimes two eggs are laid but only one chick survives

If a female lays 2 eggs in the nest, it is the first chick to hatch that most commonly survives as it out-competes it’s sibling for food.

10. They use their casques for digging

Having an extra point on top of their beaks allows these hornbills to dig in soil and rotting wood in search of insects.

Due to their shy nature, helmeted hornbills are often heard more than they are seen. They are capable of producing calls which can travel up to 2km through the forest.

Interestingly, these loud intermittent hoots often conclude in maniacal laughter, or cackle. In their home range they are thought of as sacred creatures due to their reclusive nature and remarkable appearance and vocalisations. 1

12. The helmeted hornbill is an important cultural symbol

In some areas across their range, it is thought among the Punan Bah that a large helmeted hornbill guards the river between life and death. 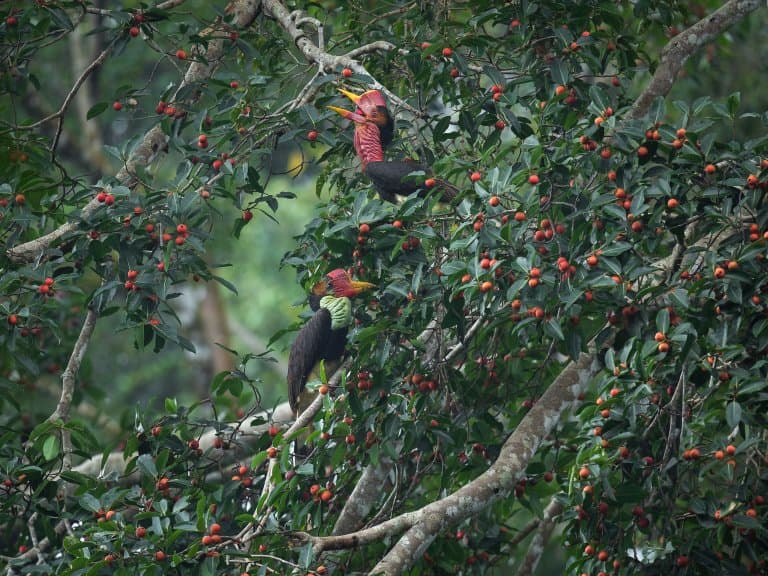 13. Sadly they are heavily targeted by hunters and illegally traded

Their solid horn is highly prized, and China is one of the biggest consumers of their casques which are often carved and used for art, beads, and pendants.

Alongisde it’s amazing bill, it’s also targeted for it’s feathers which are used in traditional costumes, which adds to its threat.

Sadly for some of China’s wealthy, rare wildlife products like that of the helmeted hornbill’s horn, or ivory from elephants and rhinos can be a sign of luxury and a class status.

The trade for this species is centred in Indonesia, and teams of poachers of up to 30 have been caught at a time. Trade networks for helmeted hornbills are managed by organised crime who work with Chinese middlemen. 2 3