Hedgehogs are loveable mammals known for their prickly exteriors and ball-like shape.

While these adorable creatures can be found in the wild, they are also often kept as pets. The sharp quills that cover most of their bodies require some special handling and care from owners. 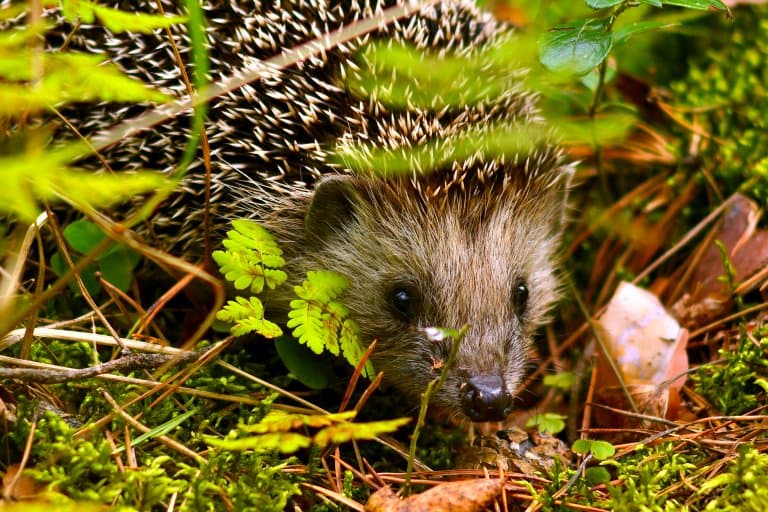 There are 18 species of hedgehog spread across Europe, Africa, and Central Asia. There are no hedgehogs native to the Americas, or Australia and they have been introduced into New Zealand.

They are mostly ground-dwelling and forage for insects, fruit, roots, and grasses. Crickets, millipedes, worms, and beetles are some of their favorite snacks.

Despite possessing a similar appearance, hedgehogs are not closely related to porcupines or echidnas, and have distant ancestory to shrews.

Their quills are quite different in that the barbed spines of porcupines are capable of detaching from their bodies. Furthermore, porcupines are classified as rodents while hedgehogs are not.

1. They were not always called hedgehogs

It is believed that the name “hedgehog” arose around the year 1450. Prior to this, they were referred to as “urchins”. 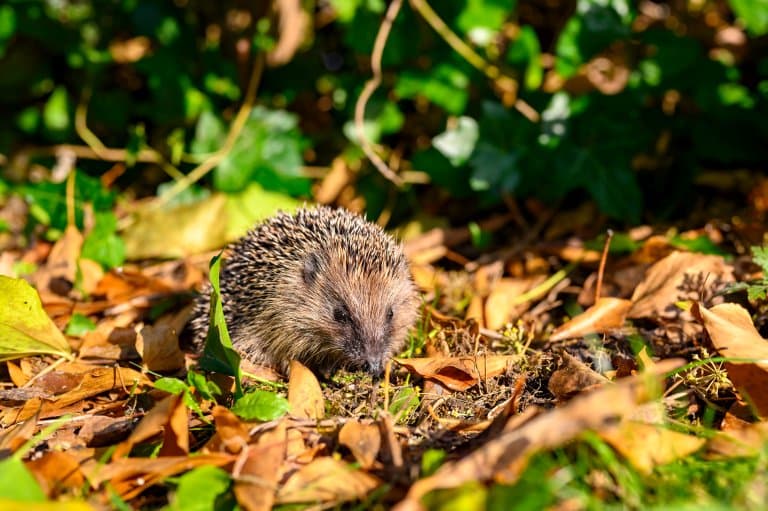 2. Hedgehogs got their name from their snout

The name “hedgehog” was inspired by both the critter’s snout which resembles that of a pig (also referred to as a ‘hog’), and the old Middle English word ‘heyghoge’, from heyg, hegge (“hedge”) – as they are often found in hedgerows.

Interestingly, when foraging on the ground, they will make hog-like grunts and snuffles, so there is some debate whether ‘hog’ came from the noise they make rather than their appearance, too.

3. Their quills are made of keratin

Keratin is the protein that makes up our hair, skin, and nails. It is also the main building block of hedgehog quills.

The quills of a hedgehog are not barbed, or poisonous, and they can’t detach like a porcupine. 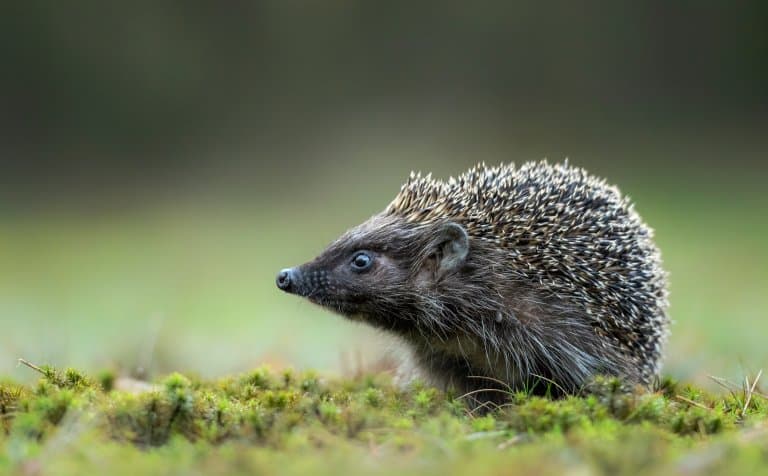 4. Their quills are hollow inside

The quills of an adult hedgehog are pointed and rigid. They are also hollow on the inside, so they are not heavy to carry around.

Each quill lasts for about a year, before it is replaced with another spike. 1

6. They roll into a ball in self-defense

All 18 species of hedgehog can famously roll into a ball for protection.

The ball-shape, means all spiky quills point outwards to scare away any predators and protect vulnerable areas such as the head, arms, feet and belly that don’t have quills.

7. They are nocturnal and sleep for a large part of the day

As nocturnal animals, hedgehogs are mostly active in the night-time. They can sleep for up to 18 hours per day.

Wild hedgehogs can also hibernate during the winter, but this does depend on the species and location. Hibernating means they sleep in a burrow during winter to help preserve their state when food sources are low, or weather is extreme.

They are one of only three mammals that hibernates in the UK. 2

9. A group of hedgehogs is called an ‘array’

Hedgehogs are usually solitary, apart from when mating. However, if multiple hedgehogs happen to be found in a group, it’s known as an array.

10. Their stellar ears and noses help them thrive as hunters

To make up for their poor eyesight, hedgehogs rely on their remarkable sense of smell and hearing to locate prey. The long-eared hedgehog, has particularly big ears! 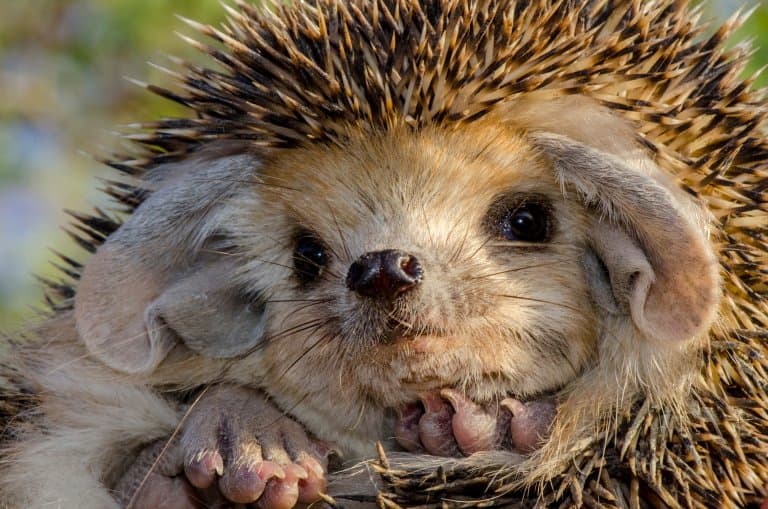 After birth, their quills will start to grow and harden.

Hoglets tend to remain under the care of their mothers for about three weeks until their spines offer adequate protection. 3 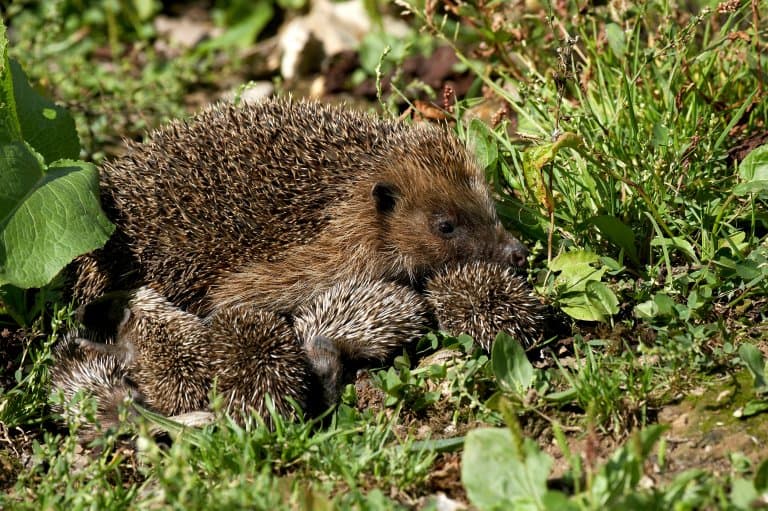 12. In a single day, they can eat up to a third of their body weight in food

Hedgehogs have a hearty appetite for insects and other pests, which is why some opt for them as pets. They love to munch on snails, earthworms, and slugs.

13. Males can spend hours trying to woo a potential mate

Male hedgehogs perform coordinated dances around females in heat, who can take hours assessing the suitability of the male.

If successful, the male will mate with the female and depart shortly after. 4

14. They have an impressive set of teeth

Like humans, hedgehogs have different types of teeth, including incisors, canines, premolars, and molars. They can have up to 44 teeth.

15. They are fantastic diggers

Most hedgehogs have five toes on each of their feet. Each toe is equipped with a curved claw that helps them efficiently cut through dirt. 5

While they have little legs, they can travel up to 2 miles when foraging for food each night.

17. Sometimes, they will take over burrows left behind by other animals

In general, hedgehogs reside in burrows to protect their young and hide from predators. Burrows can extend up to 20 inches into the ground and are mainly composed of leaves and sticks.

They can create their own, but they have also been observed assuming abandoned burrows when needed.

In water, they will extend their heads above the surface and swim in a doggie paddle-like fashion. 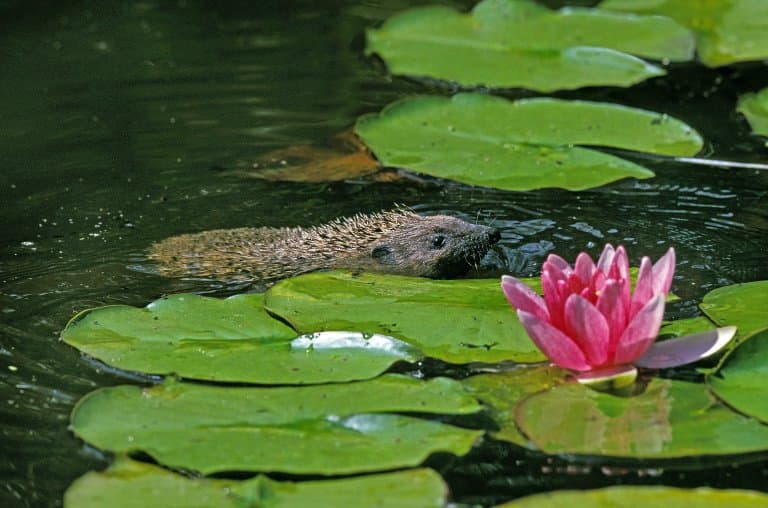 19. As an added layer of protection, hedgehogs “anoint” themselves

Hedgehogs are immune to a range of poisonous plants.

They will chew these plants up and combine them with their saliva to make a frothy secretion that they will then spread over their quills to deter predators.

20. In certain US states, they are banned as pets

In the United States, it is illegal to own a hedgehog as a pet in several regions, some of which include Alabama, California, Georgia, Hawaii, Maine, and New York City.

21. There was a nationwide effort to help hedgehogs in Britain

In the past decade, the hedgehog population experienced notable declines in Britain—numbers decreased by about 30 percent.

Residents were encouraged, by the British Hedgehog Preservation Society, to cut small holes in their fences to help hedgehogs move around. 6

Residents in the UK have historically left out milk for hedgehogs to encourage them, however milk should never be left out for them due to their intolerance. They do appreciate water, though! 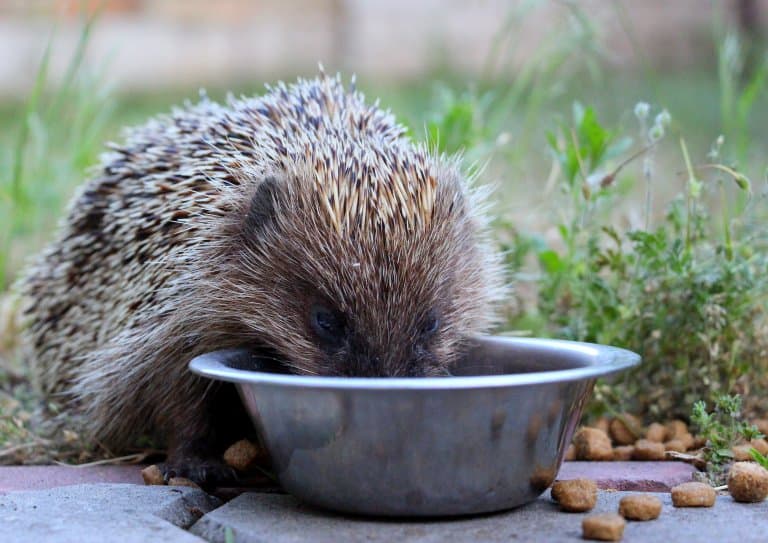