Have you ever wondered what one of the largest and the most powerful eagle in the world is? If so, then look no further than the harpy eagle.

Also known as the American harpy eagle, these large birds of prey are the most powerful raptors in the sky, capable of snatching large prey from rainforest treetops. 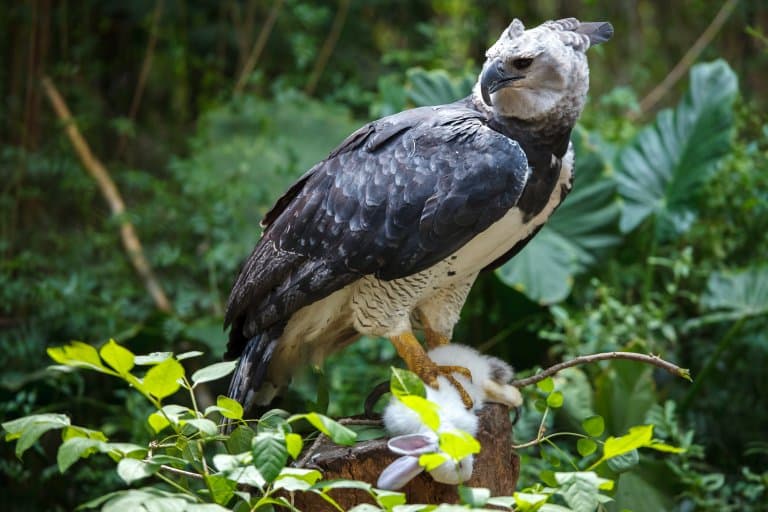 The harpy eagle is found tropical lowland rainforests from Mexico, central America and into South America as far as Argentina. They are common in Brazil, and except for Panana are largely locally extinct in central America.

Although they have extremely broad wings and a large body and weight, the harpy eagle actually has a smaller wingspan than you would expect. At two meters across, their wingspan is equal to that of many smaller predatory birds, such as other eagles and hawks.

However, this isn’t a flaw in their design! Instead, this small wingspan helps the harpy eagle to better navigate the dense forests they call home without damaging their wings. Like most eagles, the female ‘harpy’ is almost twice as large as the male.

Believe or not but you don’t often hear a harpy eagle. This can come as a surprise considering how loud some types of birds are. The main time that you will what a harpy eagle is when they are in the nest. Here, both adults and their offspring will communicate with each other using loud whistles, screeches, and other sounds.

Once they reach adulthood, harpy eagles are considered apex predators. This means that they are on the top of the food chain and like to diet on sloths, monkeys such as howler and spider monkeys, as well as porcupines, armadillos and even some domestic livestock like chickens and goats.

Unfortunately the harpy eagle is now very rare in much of it’s range, due to habitat destruction, poaching and hunting as sport. The ICUN classifies them as near threatened for these reasons. Birdlife International estimated that there were between 20,000 – 50,000 harpy eagles in 2009, but those numbers are not thought to be definitive.

1. Their talons are longer than bear claws

A harpy eagle’s talons are their key to life. They help them to land, and they’re a necessary part of hunting the large prey that harpy eagles prefer. These handy talons also just so happen to be longer than bear claws!

Not only that, but they can exert over 50 kilograms of pressure with their talons, making them effective hunting tools for a wide variety of prey. 1

2. The harpy eagle is named after harpies in Greek mythology

There is actually some meaning behind this giant eagle’s name. The harpy eagle gets their name from a creature in Greek mythology.

Known as harpies, these were dangerous monsters described as a bird with a human woman’s face. If that isn’t scary enough, they often lived in the Underworld where they were used to torture people!

You don’t have to worry about that with the harpy eagle, however. Unless you threaten them or their offspring, harpy eagles aren’t interested in humans.

3. They have some of the largest nests

Like most birds, harpy eagles build their nests out of sticks and other natural architecture pieces they can find in the forest, such as leaves. However, unlike other types of birds, the harpy eagle’s nest is huge! After all, they have to fit their supersized selves as well as their offspring into the nest.

On average, a harpy eagle’s nest can be as deep as 1.2 meters. They can also be around 1.5 meters across. A human could sit comfortably inside this nest!

Not only are their nests some of the largest in the bird-world, but they’re also incredibly sturdy. A nesting pair of harpy eagles can reuse their nest year and year. 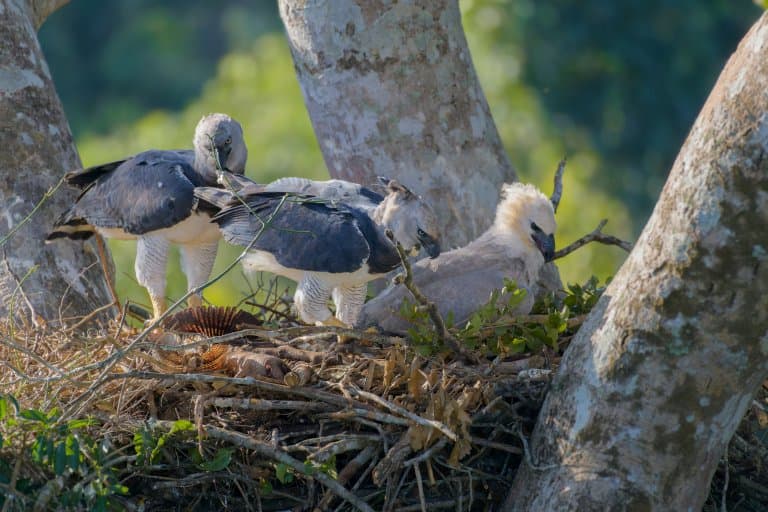 4. Harpy eagles are the national bird of Panama

They’re not the only animal of importance in Panama however! The Panamanian golden frogs are the national animal of Panama. Although they’re much smaller than the harpy eagle, they pack an equally powerful punch. This is thanks to the toxins that they can produce, which is known as a zetekitoxin. 2

5. They can go a week without food

Most animals, including most birds of prey, need to every day – or at least every other day.

Flying, nesting, and just existing as a top predator can take a lot of energy, and it’s important for predators to eat a lot to make up for their active lifestyles.

Harpy eagles, however, can go up to a week without food.

They can also go even longer without hunting. This is because where other birds of prey catch smaller prey that is consumed immediately, harpy eagles can hunt large monkeys and sloths that they can eat off of for several days. 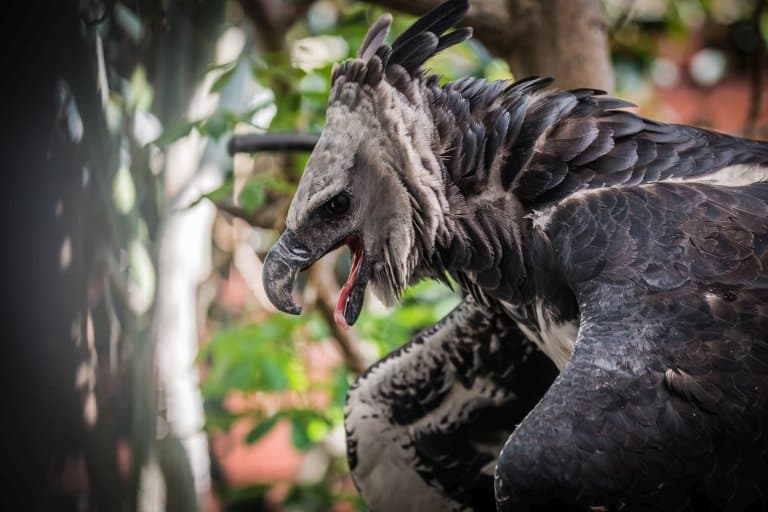 It’s rare to find birds that mate for life. However, harpy eagles are one example of a monogamous bird of prey. Year after year, they’ll stay with the same mate to produce offspring. This is even more impressive when you remember that harpy eagles can live to be over thirty years old!

Because they also can reuse the same nest for several years in a row, if you’re lucky enough to find one nesting pair in their home, you can watch them and their children grow each year. Just make sure to respect nature and these powerful birds if you engage in bird-watching – for your safety and theirs!

7. Their facial disk feathers can be lowered or lifted at will like an owl

This helps them direct sound waves to their ears to improve hearing. They also have 8 times better vision than the average human, making them incredible predators. 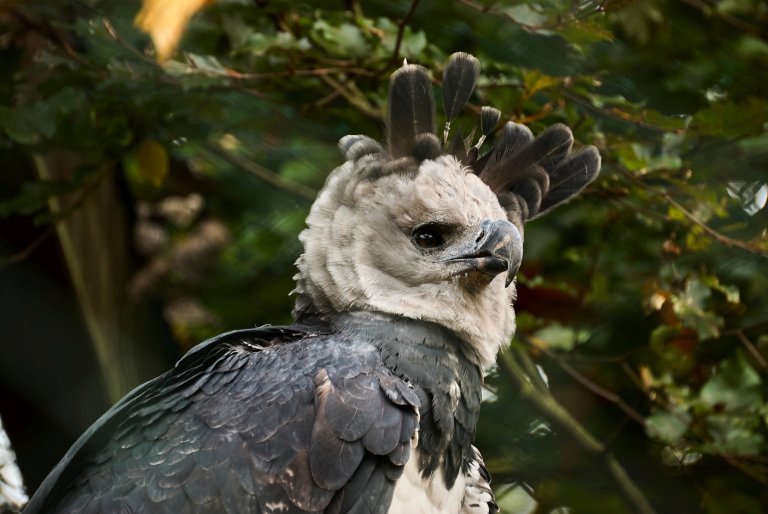 8. Female harpy eagles can pick up and fly holding prey nearly the same weight as them

Adult female harpies are able to talon and grab large howler or spider monkeys and sloths weighing between 6 – 9 kg (13 to 20 lb) from trees and fly off with them – all without landing.

This is an incredible feat in power and strength considering adult females can typically weigh up to 10kg.

9. They were the inspiration behind ‘Fawkes the Phoenix’ in Harry Potter

It’s phoenix tears had healing powers in Harry Potter and the Chamber of Secrets. 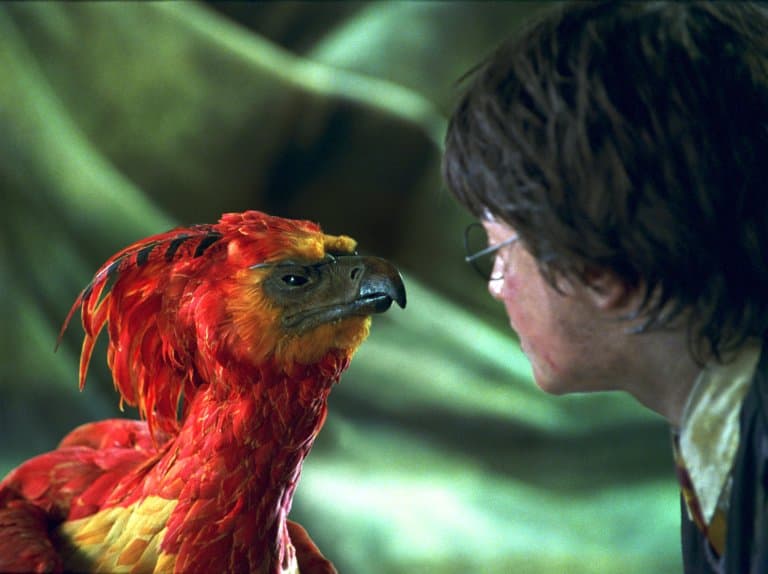 10. Globally they are considered near threatened

They are considered a conservation dependent species by The Peregrine Fund, meaning they depend on dedicated efforts for a captive breeding program and releasing into the wild and greater protection to ensure it’s not endangered from extinction.