It’s a boa, which means it’s a constrictor which wraps itself around pray forming a constriction coil and is non venomous.

Found in South America (though also occasionally in the Florida Everglades when one strays too far from home), the green anaconda is a nocturnal predator that spends most of its time in the water.

The green anaconda’s eyes are set high on their head, so it can stay mostly submerged under water but still see prey on the surface, or at the side of the water.

Female anaconda are much larger than their male counterpart, demonstrating one of the largest size gaps of vertebrates. Anacondas are typically solitary, except during mating season.

They prey on a variety of animals both large and small and have few natural predators.

1. Green anacondas are the heaviest snakes in the world

When it comes to size, this may just be one reptile you don’t want to meet face to face! After all, few snakes can claim to be one of the largest in the world.

With a weight ranging anywhere from 97.5 kilograms all the way up to 160 kilograms, these water boas can weigh the same as a golf cart. 1

2. Their size is often exaggerated

There has been lots of claims and reports of anacondas measuring over 9m (30 feet) in length, but very little credible evidence.

Almost all specimens in excess of 6m (20 ft), including a much publicised specimen of 11.36 m (37.3 ft) long are often just skin, without body or parts – and are prone to being stretched.

Therefore reports of 40 foot long anacondas, like in the famous movie, are very much fiction. Still, in comparison to a man, they can grow to huge sizes – like this green anaconda caught in French Guiana. Surprisingly, despite being one of the top predators in South America, green anacondas don’t have any venom in their bite. These serpents are a type of boa, which means they rely on restriction to suffocate their prey rather than venom. 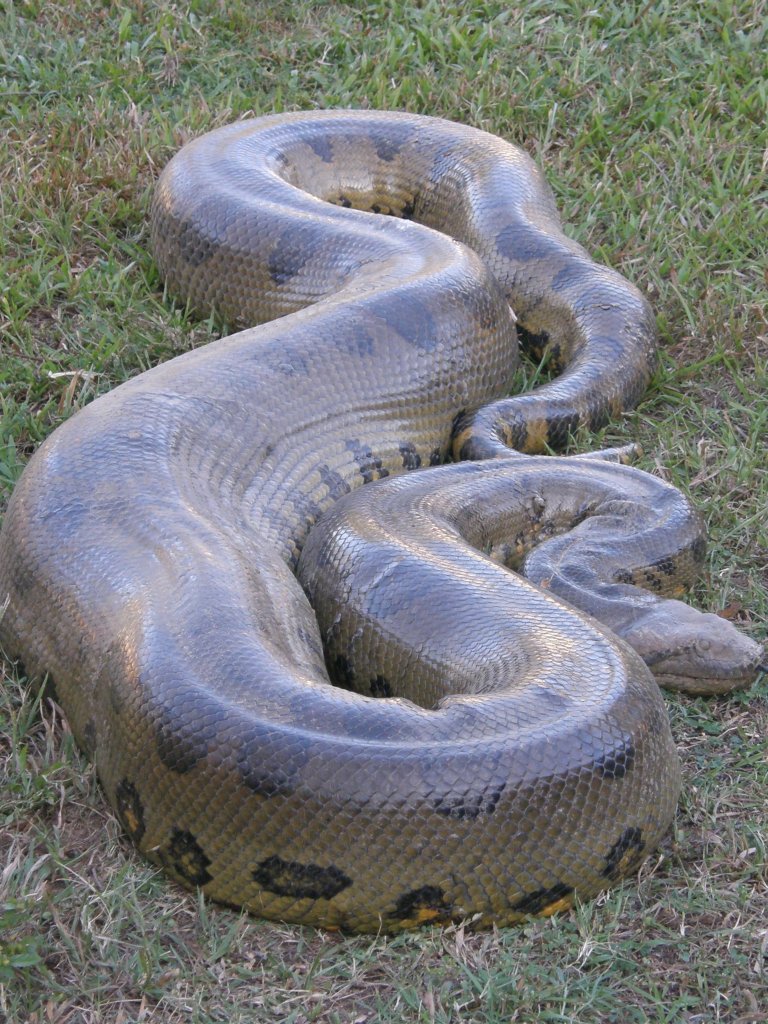 This, paired with their size, murky coloration, and underwater speed, makes them the perfect ambush predator.

4. The green anaconda can unhinge its jaw to stretch its mouth around the body of prey to swallow them

Anaconda don’t chew their food. It will coil around prey, squeeze it until it suffocates and then consume the body whole.

For larger prey, it can unhinge its own jaw to widen the opening and consume the animals body, which then breaks down inside the anaconda as it digests it. After a big meal, it doesn’t need to feed again for weeks.

5. They’re anything but picky eaters

Birds, fish, other reptiles, and even mammals—green anacondas are not picky when it comes to their next meal.

Some of the larger specimens have even been known to take down larger mammals, such as deer. A Caiman measuring 1.5m (5ft) was once found inside an Anaconda!

6. Green anacondas have been known for cannibalism

Females (the larger of the sexes) have been reported to eat smaller male anacondas.

Why? The male is good protein for an expecting mother, especially in areas with a strong dry season where life can be harder to survive. 2

7. Up to a dozen males can wrap around a single female in a ‘breeding ball’

Between March and May, male green anaconda seek out females for mating. Often multiple males will pursue the same female, resulting in a mass of males snakes ‘writhing’ around a female competing for courtship, in what is known as a breeding ball.

They breeding ball can stay together for up to 4 weeks, and the female can mate with multiple male snakes over that time.

When you think of baby snakes, you probably think of them hatching out of their eggs and slithering away. While this isn’t too far off for green anacondas, there are a few variations that only help prove that this is one of the most interesting species around!

Green anacondas do come from eggs. However, rather than the mother laying them, she’ll keep her eggs inside until the babies hatch. Then, she gives a live birth to them—a rare (although not unheard of) phenomenon for snakes.

9. They can stay underwater for nearly an hour

While green anacondas can’t breathe underwater, they come pretty close to it! These South American serpents can stay underwater for up to 50 minutes. Not sure just how impressive that is? The average human can only hold their breath for 30 seconds to two minutes!

10. Green anacondas don’t eat people – as far as we know

While some of these facts may paint a pretty intimidating picture of the green anaconda, you can rest assured knowing that there aren’t really any legitimate cases of them eating a human—although they easily eat prey just as big (if not bigger).

If that’s not enough comfort, there is also very little evidence to support a green anaconda going out of its way to hunt down and harm human.

11. They’re some of the best swimmers around

On land, green anacondas are slow and sluggish. However, in the water, they can easily reach top speeds up to 16 km/h!

This paired with the fact they can stay under water for up to ten minutes makes them one of the deadliest predators in the rivers of South America. 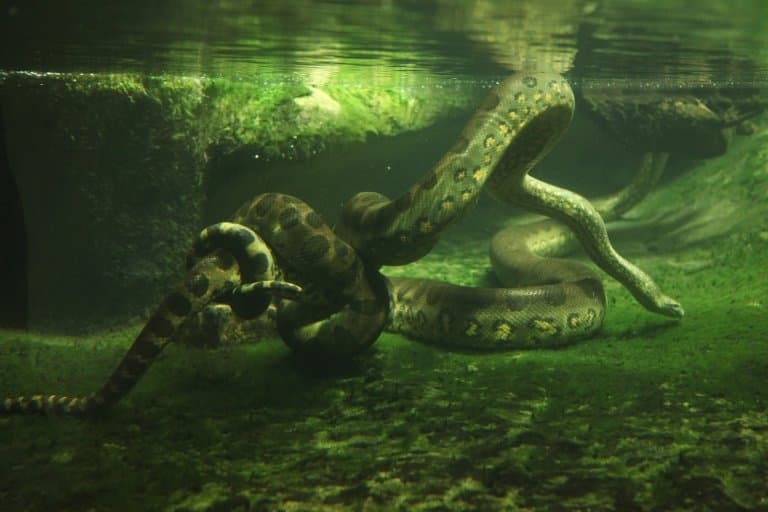 12. Like some other big snakes, green anacondas have a lot of teeth

Just because green anacondas don’t use venom when hunting their prey, they’re still like many other of species of snakes with a lot of teeth. In fact, green anacondas have four rows of teeth in their upper jaw.

Their teeth are also super long compared to other species. This is because one of the ways they hunt their prey is by dragging them into the water.

Long teeth like theirs are better for getting a grip on even some of the furriest (or feathery) creatures that happen to make it onto the menu.

13. In some areas, green anacondas are an invasive species

Green anacondas live in a lot of places. A lot. However, that doesn’t mean they necessarily belong in all of these areas. 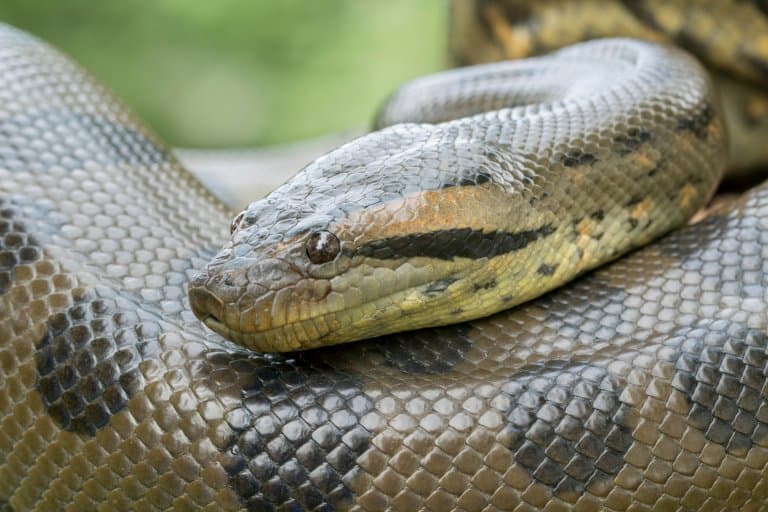 There have been occasional sightings of green anacondas in Florida. While the marshy areas may seem like the perfect home, green anacondas are considered an invasive species here and can cause many problems for the ecosystem.

14. Despite being the heaviest snake in the world, green anacondas have some interesting predators

However, even with jaguars and caimans as predators, the green anaconda can still be a difficult predator to turn into prey.

In fact, full grown adult anacondas are considered to have no natural predators due to how difficult it can be for other animals to hunt them.

As a result, while we consider jaguars and caimans as predators, it’s usually in reference to baby or juvenile anacondas.