The wolf also known as the ‘gray wolf‘ or ‘grey wolf’ is as iconic as any animal in the Northern hemisphere. And with good reason. There are over thirty subspecies, covering almost every country in Europe and many others across the upper half of the globe.

They’ve been part of folklore since the dawn of settlement in Europe and still exist in our fairy tales and on our tacky t-shirts. But as much as they’re legendary, they’re not mythical. And though in many cases they’re doing well, there are many places where they’re still demonised and persecuted. 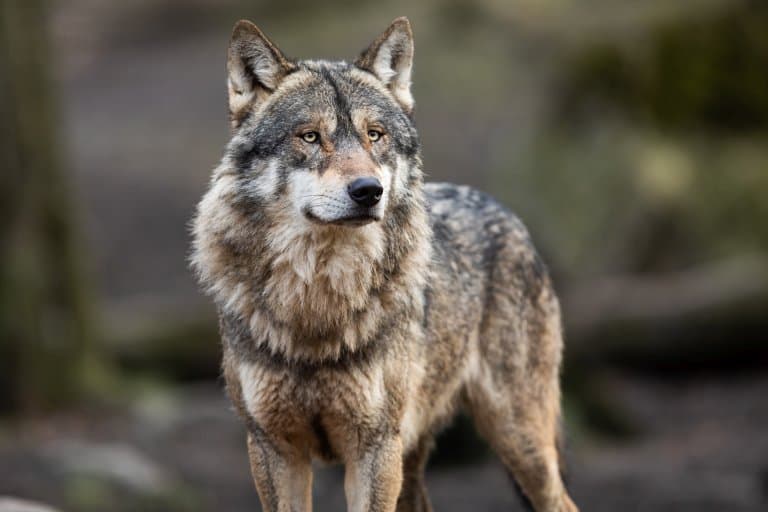 The wolf might not be exactly what you’d expect from its depictions in Hollywood or in ancient tales of house-destroying pig hunters. In fact, it’s a shy, elusive animal with powerful social bonds and very little interest in humans.

Yet, the gray wolf could be considered one of the most powerful animals on the planet – both as a fierce predator and as an ecosystem engineer, and with its iconic howl, it’s little wonder that it’s sparked the imagination of children and adults alike since the dawn of civilisation.

They travel in ‘nuclear families‘, which consist of parents and their children. This group is known as a ‘wolf pack’, and offspring may leave to form their own packs as they mature. Wolves are territorial and will often fight each other over territory.

Wolves like to hunt in pairs or small packs and will prefer to eat large hooved animals such as deer, moose or bison, but do diet on smaller animals, like rabbits, rats and even lizards and carrion. They are not fussy eaters and will adapt with what’s available in the season.

The global wild wolf population was estimated to be 300,000 in 2003 and their conservation status is considered to be of least concern by the ICUN.

1. They are the largest living member of the Canidae family

Canidae is the family name of a group of dog-like carnivorans, and includes domestic dogs, foxes, coyotes, golden jackal and other wolves.

The largest widely accepted grey wolf from Canada reportedly weighed 103 kg (227 lb) according to the Guiness Book of Records. 1 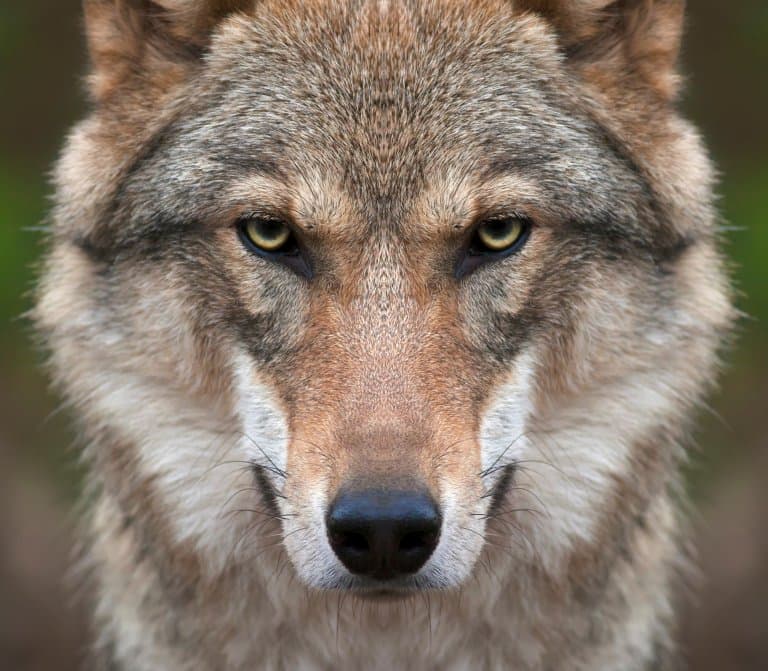 2. There might be a grey wolf in your bedroom right now!

That’s because domestic dogs are a divergent subspecies of the grey wolf, having descended from a now-extinct subspecies (with some significant human interference) to produce what we now call a ‘pet’.

It was once thought the two were a separate species, the Grey wolf being Canis lupus, and the dog being Canis familiaris.

However, as is often the case in taxonomy, genetic studies have come to the rescue and provided strong evidence that dogs are just funny-looking wolves we like to throw sticks for.

3. They’re one of the most widely-distributed mammals

Gray wolves used to rule half the planet, occupying every continent in the Northern hemisphere.

Their present populations are much more restricted by human occupation, but they’re still exceptionally distributed across almost every country in Europe and several in Asia, America and the Middle East.

While the IUCN lists the Gray wolf as ‘of least concern’, they’re endangered in many populations around the world.

4. A single immigrant can save a population

As was the case in Scandinavia, where a large pack of wolves was getting worryingly close to in-breeding. The fragmentation of populations in human-dominated regions prevents migratory wolves from moving between populations; something that is absolutely necessary to maintain clean and diverse genetic pathways.

In this Scandinavian example, a large pack that was founded by a single pair was rescued from a dangerous genetic bottleneck by a single roaming male. This shows that even rare events like this can save the future of an entire pack of wolves, and demonstrates the importance of animal corridors as part of protection programs for wolves. 3

Wolves are so powerful as a species that they have the ability to change the course of rivers. The cascade of effects that came from the reintroduction of wolves into Yellowstone National Park resulted in stark geographical alterations in the landscape.

That’s because when the wolves returned, the large herbivores had to stay out of dangerous areas, which allowed grasses they’d been eating to succeed into saplings, and then trees, whose roots shored up the banks of rivers and prevented floods from eroding new paths.

With the trees now growing, insects arrived, and in turn, came the birds. The introduction of a single small population of wolves changed the entire ecosystem to a cacophony of biodiversity. This is the power of a keystone species, and why it’s so important to conserve them where possible!

6. They can have immense territories

Wolves tend to carve out their territories based on prey density. That makes sense because you don’t want to run farther than you have to, to get your food.

What this means is that although wolves in areas of high prey density might have territories as small as 7.5 square miles, in vast wildernesses such as the Arctic, they may need ranges of up to 1000 mi2 to protect.

7. Wolf packs will fight over territory

One study concluded that 14-65% of wolf deaths in Minnesota and the Denali National Park and Preserve were due to wolves fighting and killing each other.

As you may have gathered from point 4, wolves have an incredible capacity for recovery. Over the last 50 years, wolf populations across the European continent have jumped considerably.

What makes this even more incredible is that this expansion has happened without relocating or translocating any wolves at all. They did it all by themselves, as a result of people simply leaving them alone.

That’s not always as easy as it might sound, however, and there are countless wolf populations that are under threat from hunters, often sanctioned by governments.

Wolves can eat up to 14kg of meat in a single sitting. That’s a huge steak, but it balances out on occasion when you realise they can go up to two weeks between meals when times are rough. 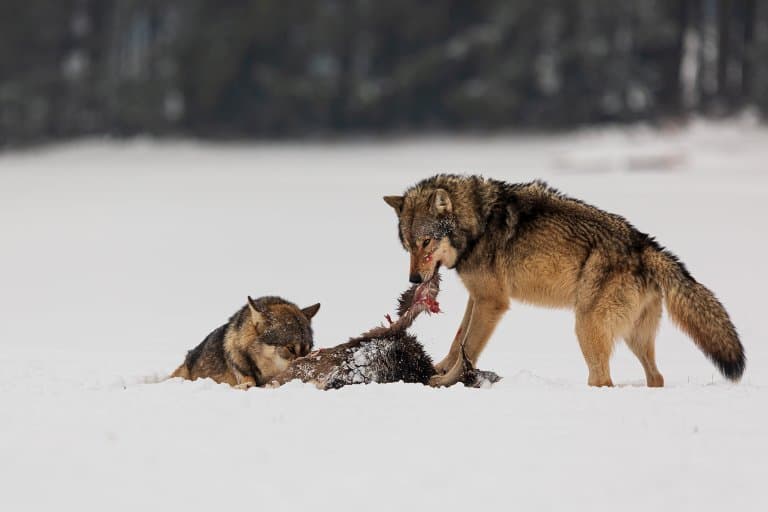 10. Cannabilism is not uncommon

During harsh winters or times where food is scarce, packs can attack weak or injured wolves and can eat the bodies of the dead.

This means a mated pair and its offspring. While the average pack size if around 5-6 wolves in North America, they can grow up to around 8 in a pack across Eurasia.

Two or three families have been known to form larger packs of up to 40 wolves.

However, often single wolves or mated wolves have more success in hunting than large packs.

When hunting, wolves will try and isolate an individual from its group, before chasing, biting and bringing down their prey. 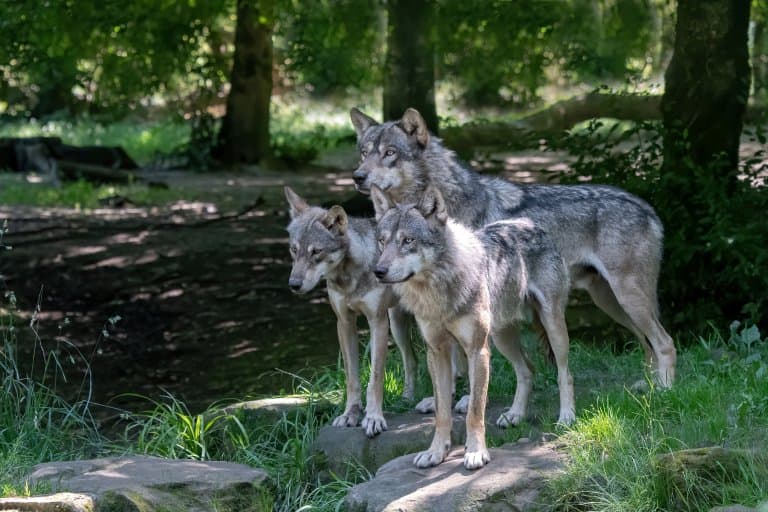 13. Wolves will mate for life

Wolves are monogamous and pairs mate for life. However, if one dies, another mate is often found quickly.

They must be cared for until they mature at around ten months of age. 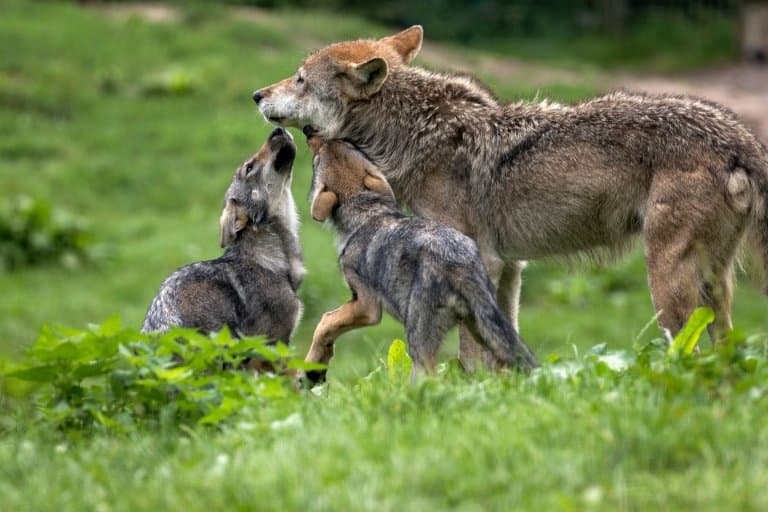 15. Wolves do not howl at the moon

Contrary to popular depictions, the moon doesn’t play a major role in why wolves howl. Wolves howl for a number of other reasons, though.

They can howl during hunting, to communicate their whereabouts over long distances, they can howl to let other packs know they need to keep their distance, or they can howl as a bonding behaviour between individuals in the same pack.

They also seem to howl mostly between 6 pm and midnight, which might be where the image of a wolf howling at the moon comes from.

They do it to reunite, and they do it when they’re reunited as a celebration. So, they howl for a lot of reasons, but never at the moon; that’s more of a werewolf thing. 4 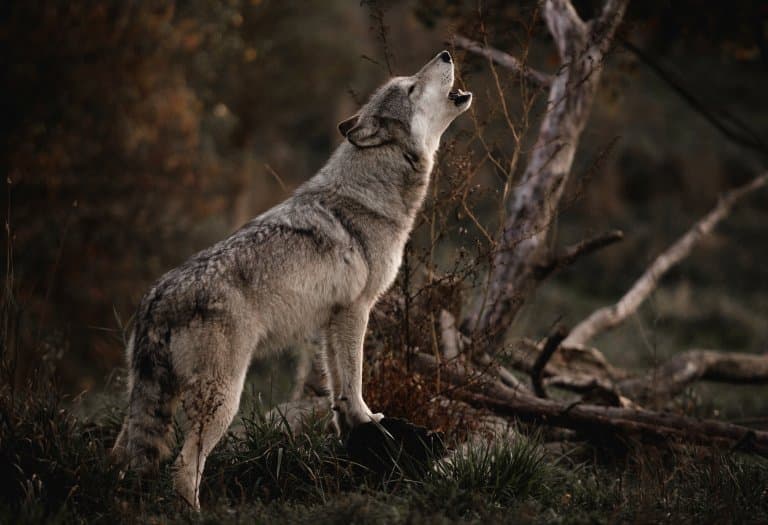 16. Wolves are often feared across cultures

However, humans are not a wolves natural prey. Since the 2020s, there’s only been 3 recorded cases of humans being attacked by gray wolves, which resulted in no deaths.

17. They still need our help

At the end of 2021, the Norwegian court released its protection of wolf populations in a wolf-conservation zone in the country; an area that makes up only 5% of Norway’s land. As a result, Nine of the 50 wolves in the country were immediately killed, and 25 more kills were sanctioned.

This is a direct product of the livestock industry, which values its bottom line over the ecosystem that sustains it, and, sadly, puts Northern European Grey wolf populations at great risk.

In other areas, the motive is driven by hunters, whose dogs are at risk from wolf attacks during recreational hunting trips. In Scandinavia, in particular, hunters carry a lot of political power and are able to push back against conservation efforts for their sport. 5